The left's best 2016 move: Why Democrats need a primary, too

Amid GOP's circus, it's important for Hillary Clinton -- and progressives -- if she gets an opponent. Here's why 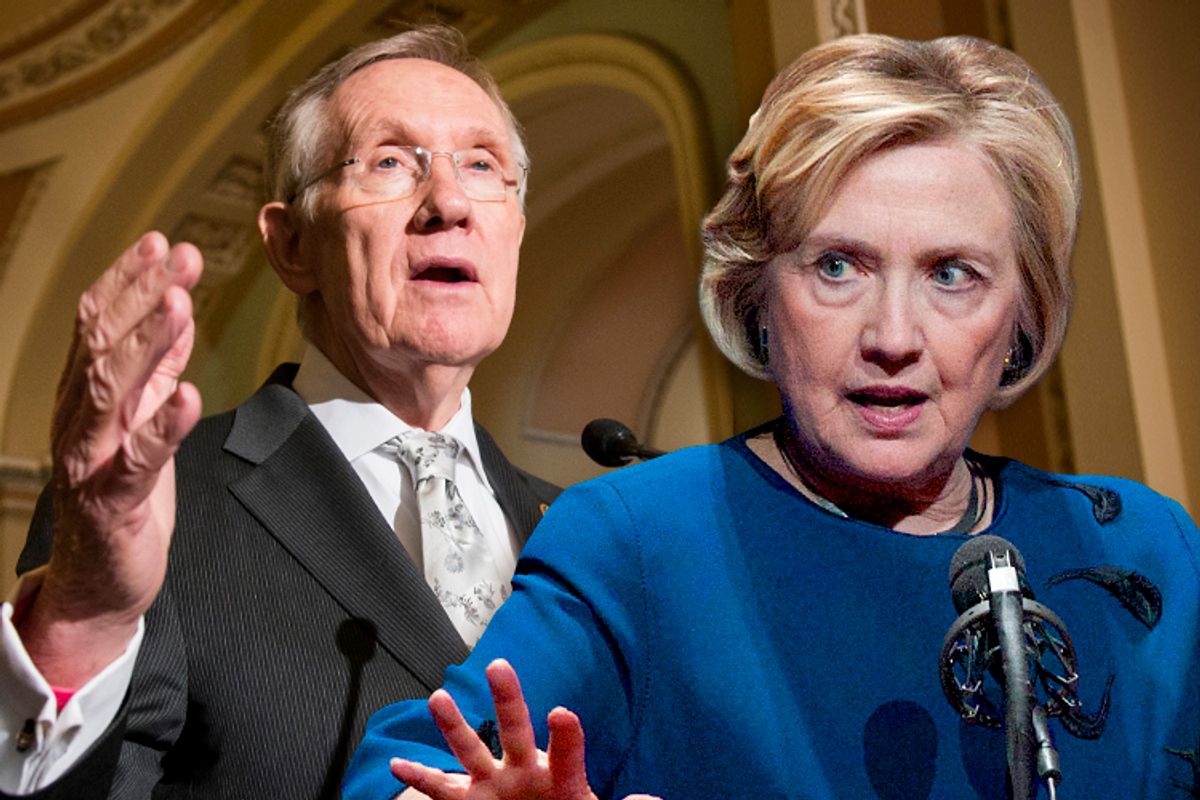 In what appears to be a mischievous attempt to stir the pot, the Washington Post's blog the Fix pulled up this quote from Harry Reid in a recent interview to imply that Reid may not be fully committed to a Hillary Clinton candidacy:

Chuck: And do you want her to be the nominee? Or do you think there should be a healthy primary process?

Reid: Rarely do I think primaries are healthy.

Chuck: Oh, is that right? You don't think they're good for for Democrats?

Reid: Why do you go to all the trouble? It'd be nice to just have people anointed and run off -- I'm being facetious, you know.

Chuck: Oh, okay. I thought you were and I wasn't sure. So, you think -- you think it would be better for -- for Secretary Clinton if she has a serious Democratic rival?

Reid: I believe that the primary that was -- with Obama and Clinton was an extremely healthy process. I think it was wonderful. And I think it -- people learned about these two people that they didn't -- things they know about before.

The Fix revisits the infamous moment when Reid supposedly called then Sen. Obama to his office to tell him that he could win the presidency if he decided to run, thus challenging the notion that Hillary Clinton was the inevitable nominee in 2008. His comments above are therefore naturally interpreted as a new attempt to deny Clinton the nomination, perhaps in favor of Reid's old friend Joe Biden. Parsing such comments that way is the bread and butter of such chroniclers of Beltway intrigue so it's not surprising they'd frame it that way. But the truth is that Harry Reid may just be sincere in his belief that primaries are healthy. And even if he isn't sincere, he's still right.

It's actually quite unusual for the Democrats not to have a contested nomination. That's something the Republicans normally do -- some exalted figure who lost last time is often seen as "next in line" and they might have a token primary but everyone knows who the anointed candidate is ahead of time. The Democrats, on the other hand, often stage a full-blown circus in which even the groomed successor to a two-term president, usually his V.P., will face an energetic primary opponent.

It's interesting to see this turned on its head. The 2016 race for the GOP nomination looks to be a rather wild and chaotic race featuring a big argument over the direction of the party. It may bear some similarities to the 2012 campaign, but the anointing of Mitt Romney was never really in doubt. This time, it could be anyone from upstart Ted Cruz to the third iteration of the Bush presidential dynasty. It's even possible that some dark horse that isn't even in current consideration (like Bill Clinton in 1992) could end up with the nod. This should be interesting --Republicans don't like surprises. And so far, there has not been the slightest rumbling that Hillary Clinton will receive even a token opponent, which may be unprecedented. It's almost as if the near-tie in the primary of 2008 resulted in an agreement that Clinton had already won the 2016 nomination.

But that's unfortunate, for her as well as  for progressives in the party. The 2008 primary campaign was not fought over issues. Clinton and Obama differed only on the margins and the rest of the field was dismissed as gadflies early in the process. The issues that are central to today's politics -- income inequality, overzealous and unaccountable government surveillance, the coddling of Wall Street, the flood of money in politics, the culture wars over women's rights and gun control -- are all salient in ways they weren't back then. These last few years have brought forth a new awareness and concern about all those things and they have not yet been addressed and litigated on a national basis among Democratic voters, particularly progressives who are in a very different place than they were five years ago.

Clinton would benefit from that input just as all incumbents and other party luminaries do, despite the fact that they would rather not have to have that fight. It is not good for a president to take the office without having taken the temperature of his or her supporters and understanding what they care about and what they expect. During a tempestuous period like this one, it's even more important than usual. It would only be to her advantage to have a challenger who could bring forth those issues and allow the public to see them argued before she goes up against a Republican.

This is what primaries are good for. It's the one place in the nominating process where voters can directly register with the party where they stand on certain issues. An anointing leaves them with little input and a fast track to disillusionment if the candidate doesn't understand her or his own constituents.

Primaries were originally conceived as part of the progressive reforms of the early 20th century. The idea was to democratize the presidential nominating process, as ironic as that sounds. But they remained only a partial addition to the more traditional convention process until 1968 when all hell broke loose and primaries and caucuses became the binding method of choosing the nominees. They are still subject to manipulation, but the concept of voters selecting their nominees for president and vice president now theoretically guides the process. Unfortunately, without a primary challenge that concept is pretty much moot.

Harry Reid may have been playing political games in that interview as the Fix suggested. But when he said it is healthy to have primaries he was telling the truth. Yes, sometimes doing what's healthy is uncomfortable and unpleasant. But it's very good for the body politic for its standard bearers to have to answer the demands of their own supporters rather than simply relying on party loyalty to get them over the finish line. It's fundamental to a well-functioning democracy.

The question is, who would challenge Hillary Clinton? Anybody? Bueller?