"Rosemary's Baby" stars a black woman. Why isn't anybody mad?

Audiences often object to black actors cast in "white" roles. But for some reason, Rosemary is different 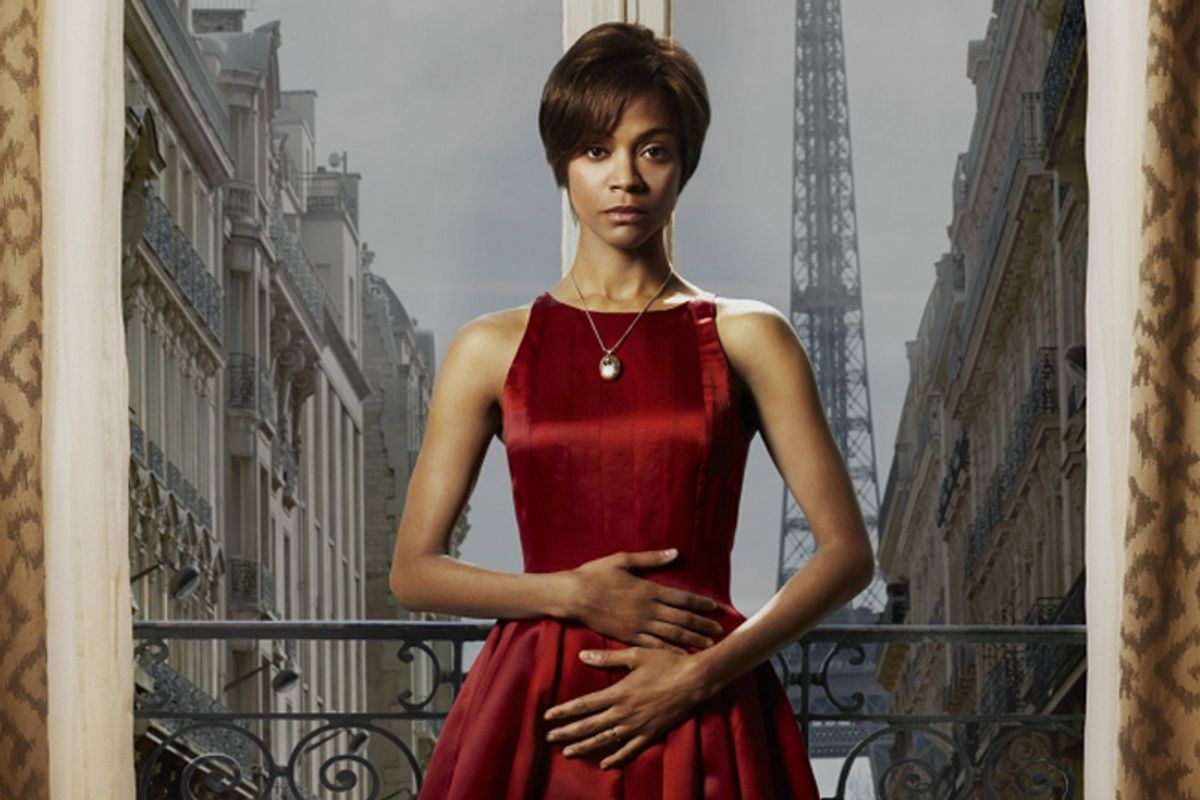 A new, miniseries version of “Rosemary’s Baby” premieres on NBC this Sunday, starring Zoe Saldana as the titular mother of Satan’s spawn. I am almost ashamed to admit this, but my first thought after hearing about this production was not, "How will it be different than the 1968 Roman Polanski classic?” or “Why is it a miniseries?” or even “Will it be any good?” No, my first thought was, “Oh, man, white people are going to freak out over a black Rosemary.” As the series’ air date neared, I began to search for instances of outrage on Internet comment boards and, of course, on the most obvious incubator of frivolous beef, Twitter. Ultimately, I found little objection to Saldana’s casting. Though I am embarrassed to have gone looking for controversy where there appears to be none, a brief, not-at-all exhaustive survey of recent public response to black actors cast in traditionally white roles proves why I expected the worst.

Recently there was an uproar over the casting of actor Michael B. Jordan (“Fruitvale Station”) as fiery Johnny Storm in the upcoming update of the The Fantastic Four comic book series. Jordan has already proven his heroic merit in the brilliantly understated origin story “Chronicle.” Nevertheless, many Fantastic Four fans objected to this announcement on the grounds that the recognizably white Kate Mara was cast as Storm’s sister Sue – an objection predicated on the nonexistence of adoption or half-siblings. In one comment section, I read a very impassioned argument that Johnny Storm was traditionally written in the comic books as a cocky, privileged white man. Therefore, re-casting him as black would undermine the character’s arc into a better, more humble person. What?

The fanboy rabbithole on this topic is bottomless. There are pro-Nordic lobbies against Idris Elba being cast as Heimdall in the Thor franchise films. I even dug up specious resistance to Samuel Jackson as Nick Fury. (Having watched him thrillingly chew up the CGI scenery in so many Avengers films, you have to wonder, "Was there ever any other option?") To my mind, the most upsetting of these occasions pertains to the casting of Amandla Stenberg as the character of Rue in “The Hunger Games,” where her tragic death scene is the emotional turning point of the film. The insidious tenor of protest was reported basically everywhere. It seemed that some white folk simply had difficulty relating to or sympathizing with the on-screen death of an innocent young child because of the color of her skin. As if this truth doesn’t suck enough, such grumblings are often based on the idea that the casting of a black person somehow violates the sanctity of the source material, as evidenced by current grievances against the forthcoming “Annie” remake starring Quvenzhané Wallis (“Beasts of the Southern Wild”). In the case of “The Hunger Games,” however, the filmmakers were not being heedlessly creative or liberal-minded. They were being faithful. The book describes Rue as having “dark brown skin and eyes.”

“Rosemary’s Baby” is not my favorite film, or even my favorite horror movie. Yet, I have always accepted the image of actress Mia Farrow with her pixie haircut as somewhat iconic -- this brittle waif seduced and taken advantage of by dark forces, leading to the ultimate corruption of her motherhood. If someone can raise their hand and say that Annie is too ginger or Johnny Storm too douche-y to be black, I fully expected to read some deceptively or overtly racist rant about how the character of Rosemary Woodhouse is traditionally meek, innocent, or pure – all qualities not typically ascribed to black female characters.

Here, it is important that I state, for the record, that I am extremely glad that I have not, as of yet, come across too many such objections. I have not seen this updated version, but judging from the most famous iteration of the story, I happen to believe that Saldana will make an ideal Rosemary. Throughout all of the performances of her career – tough, sinewy action heroines or not – Saldana has always betrayed a certain fragility that is perfectly suited for a character whose actions are being mysteriously manipulated and whose sanity is in jeopardy.

Still, the fact that Zoe Saldana may very well nail the part doesn’t explain why the considerable contingent of online racists have remained, for the most part, mum on her casting. After all, most of the actors cited above – Elba, Jordan, Wallis – came to their parts with talent and high praise, but that didn’t stop the haters from speaking up and slinging venom. It could simply be that Saldana is often described in the press as being Latina – Puerto Rican and Dominican. While that may be a more specific and accurate description of her ethnicity, here is a clip of Saldana, notoriously gunshy about discussing race, referring to herself as a “black woman" and a "Latina."

The answer could be that, indeed, times are changing -- i.e., the kind of kneejerk racism that I expected to see is actually on the decline. I couldn’t be happier if that were true, but it seems unlikely considering that the previously cited minor shitstorms are so recent – even contemporary. The simpler, sadder, more likely reason is that, despite NBC’s efforts to the contrary, this “Rosemary’s Baby” update does not actually represent high-profile, event television to the larger viewing public. In other words, nobody has been paying that much attention, and the hardcore racists are saving their vocal disdain for the day Jeffrey Wright is cast opposite Anika Noni Rose in a motion picture remake of “The Shining.”