The Pulitzer Prize-winner talks Snowden, the "banal" Hillary Clinton, and why Tim Russert is so vastly overrated 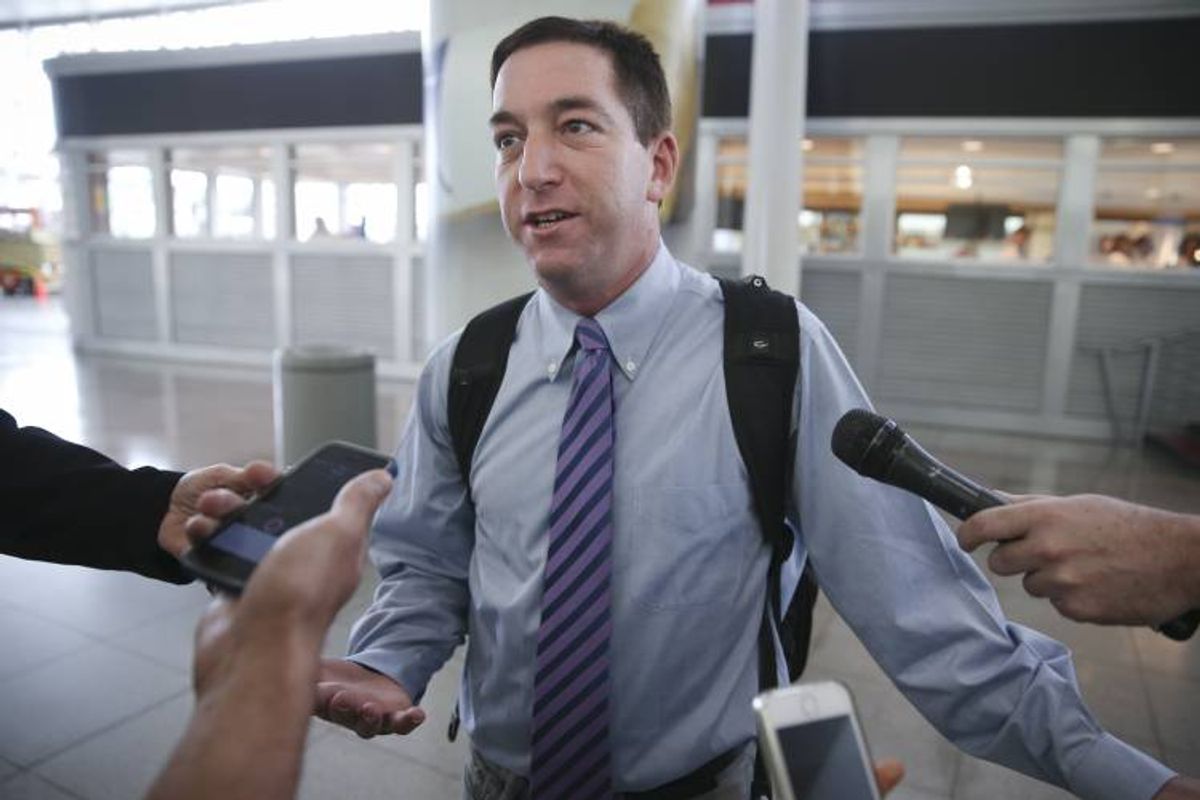 In a new interview with GQ, Pulitzer Prize-winning journalist Glenn Greenwald (who has a new book coming out this week) shares his thoughts on Edward Snowden, the NSA, the U.S. post-9/11 surveillance state and the failings of modern journalism in America today.

The whole interview is well worth the time — especially for those who haven't yet experienced the famously pugnacious Greenwald's more humane side — but here's a quick roundup of some of its juiciest moments.

How Greenwald felt when he first began communicating with Edward Snowden:

I first started talking to Snowden, sitting right at this table, by chat on the computer. People e-mail you and say, "Oh, I have a huge story," and you read it and it's like, this is the ranting of a crazy person. So once I was encrypted, which took a while, I just kept insisting that he send me some sampling of what he had. So he sent me two dozen extraordinary documents. And I remember, I mean, I literally just physiologically couldn't breathe. As I was reading them, I had to keep stopping and running around the house and telling [my partner] David what I had. I was half celebrating but half freaking out, because I started, for the first time, to realize the potential of what this was.

Why Greenwald decided to spend much of their first in-person meeting bombarding Snowden with questions:

We're sitting in a small room, and we just tried to have some pleasantries, like, "How was the trip?" And it just ... Everyone was so tense. So the only thing to do was to dive right in to the substance. And that was absolutely my tactic. I was just going to pound the shit out of him with the hardest questions I could. Not let him take a break, because I needed to know that he wasn't someone impetuously throwing his life away. I wanted to know why he was willing to risk his whole life for this political ideal. How Snowden was perceived [by the public] was going to matter a lot for the story. So I was able to really interrogate him for like five or six hours, until I realized, no, actually he is a very independent thinker and extremely knowledgeable, and I got his whole biography.

Greenwald's plans for the many Snowden documents yet to be released to the public:

I think we will end the big stories in about three months or so [June or July 2014]. I like to think of it as a fireworks show: You want to save your best for last. There's a story that from the beginning I thought would be our biggest, and I'm saving that. The last one is the one where the sky is all covered in spectacular multicolored hues. This will be the finale, a big missing piece. Snowden knows about it and is excited about it.

Afterwards, there'll be more to release—I made a promise to Snowden that we'd get as much of the archive out as possible—but I think the big media splashes will probably be over. But it takes time. We're reporting on stories right now, finding things in the archive still that we're trying to corroborate. We have one reporter who has done nothing but read documents, trying to cross-reference and make connections, every day since November.

Why he's so critical of the New York Times:

I think the Times has had a close relationship with the government in the last five to six decades. I mean, it's interesting, if you go back and read left-leaning media critics during the Vietnam War, they were saying a lot of the same things that left-wing media critics were saying during the Iraq War. That in the wake of 9/11, news-media outlets are disseminating pro-government, pro-war falsehoods by doing nothing more than talking to government officials and laundering their claims as reporting—as though the government is on the editorial board of The New York Times.

Why Tim Russert was so overrated:

You know, like everyone was petrified of him. When he died, Lewis Lapham described him as the overaccommodating head waiter at some really swanky restaurant who's just really good at ass-kissing every rich person who comes into the door. And that was Tim Russert—which is why they all loved Tim Russert, right? Because the benefit of Tim Russert was that not only did he let them control the message, but he cast the appearance that they were subjected to really rigorous questioning. So it was the extra bonus of propagandizing while convincing the public that they weren't being propagandized. And so I think all those TV hosts do that, and I think that most major newspapers are incredibly deferential to high-level government officials, and especially to military and intelligence officials.

Hillary is banal, corrupted, drained of vibrancy and passion. I mean, she's been around forever, the Clinton circle. She's a fucking hawk and like a neocon, practically. She's surrounded by all these sleazy money types who are just corrupting everything everywhere. But she's going to be the first female president, and women in America are going to be completely invested in her candidacy. Opposition to her is going to be depicted as misogynistic, like opposition to Obama has been depicted as racist. It's going to be this completely symbolic messaging that's going to overshadow the fact that she'll do nothing but continue everything in pursuit of her own power. They'll probably have a gay person after Hillary who's just going to do the same thing.

I hope this happens so badly, because I think it'll be so instructive in that regard. It'll prove the point. Americans love to mock the idea of monarchy, and yet we have our own de facto monarchy. I think what these leaks did is, they demonstrated that there really is this government that just is the kind of permanent government that doesn't get affected by election choices and that isn't in any way accountable to any sort of democratic transparency and just creates its own world off on its own.