Every mother wants to be loved. But is it possible my boy loves me a little too much? 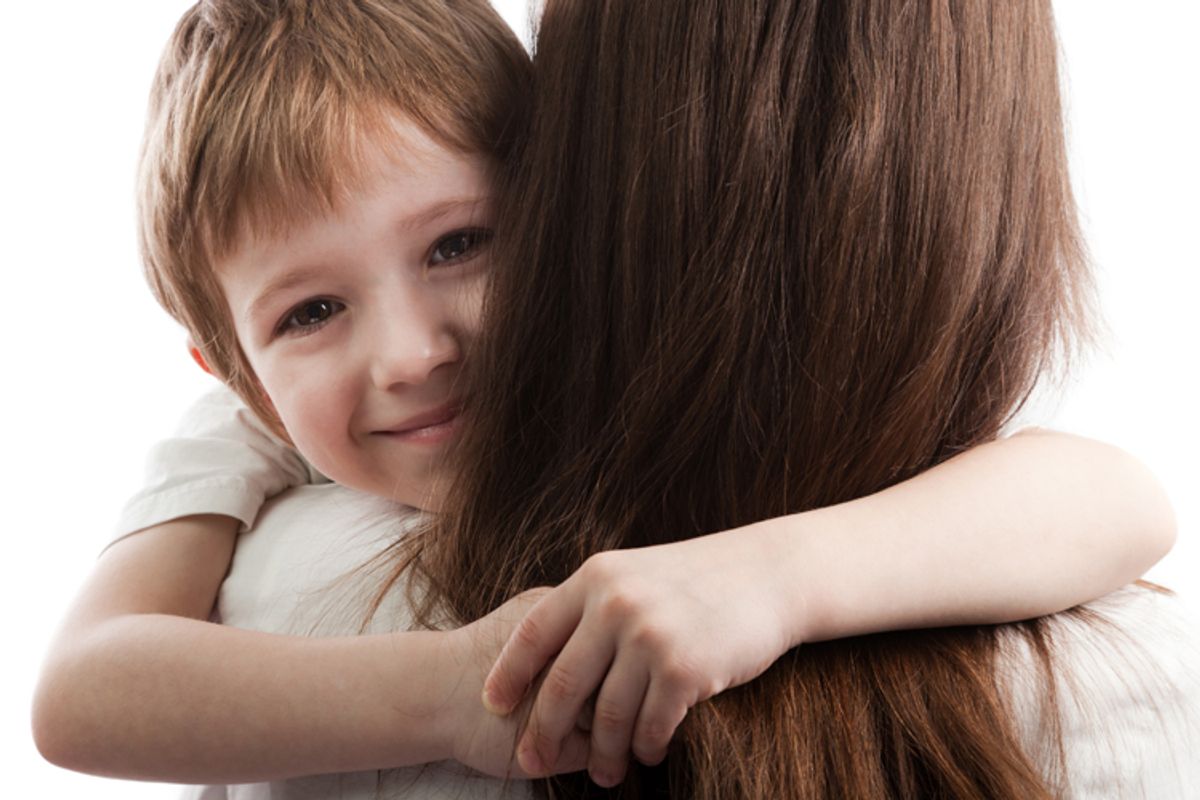 “Oedipus Rex” – you know the story. The mythical Greek king of Thebes, son of King Laius and Queen Jacosta, the doomed prince who fulfills the Oracle of Delphi’s prophecy that any son of Laius will kill his father, marry his mother and destroy his family. Bane of high school classics courses, he was the inspiration for Freud’s Oedipus complex, the stage of psychosexual development when a child feels varying degrees of jealousy toward his father.

In classic Freudian psychology, the Oedipus complex rears itself between the ages of 3 and 6. By my calculations we were right on schedule. Not long after my son’s third birthday, he didn’t so much pop the question as state his intentions.

“Oh, that’s so sweet. But I’m already married to Daddy,” I answered.

“How about at night? Can we be married at night?” he asked.

Adorable! My son wanted to marry me. I wasn’t just charmed, I was awash in a rare sea of complete fulfillment. It had taken my husband three years to ask me to marry him. It took my son three years, too. Clearly I could win anyone over with a little effort, a concerted approach, and whole lot of Goldfish crackers.

Had I perhaps been trying too hard? In a word, yes. With my first son, I was one of those mothers who was all-in, and my son knew it. I practiced attachment parenting. How attached were we? I don’t think I laid him on a surface other than my chest for the first five months of his life. It wasn’t that I was some kind of obsessed mother interested in the benefits of skin-to-skin contact. My son screamed every time he was out of my arms. Blood-curdling screams, the kind you might wish on telemarketers.

Everything I did, I overdid. I made four-layer baked oatmeal on the weekends. I planned afternoons of Shrinky Dinks and elaborate puppet shows. I read to him constantly, easily 25 books a day. I went from my natural baseline of being a champion snuggler to an Olympian of the sport, always training, always nearing the peak of my form. From the very beginning, I wasn’t raising children. I was crafting the greatest hearts-and-minds campaign of my life. Is it so wrong to want your son to love you?

It was working. I was loved beyond measure. Deep, pleasurable, suffocating love. The kind of love that sometimes sends you to the bathtub with your headphones on. My husband was equally devoted, if perhaps not quite so intent on receiving something in return.  It wasn’t long before my son finally sat me down and gave me my longed-for proof positive of my efforts paying off.

“Mama, when we get married I’m going to be a farmer.” (Clearly he had developed my affinity for the vacation version of farming).

“Mama, let’s take a shower together.”

Before long, my son had moved from swift pecks on my cheek to tongue flying at my face from the other side of the couch. It was the like being ambushed by a tiny slug.

“No tongue kissing!” I said firmly, over and over.

But was this correct? Maybe “no tongue kissing your mother” would be more accurate? Maybe “I’m going to bring this up when you bring a girlfriend home at 16”? Threats of profound developmental shame are lost on a 3-year-old.

Very few people who have heard of the Oedipus complex believe that sons actually want to sleep with their mothers. But if that was the extreme, we were living proof of the theory. My son had clearly reached the first Oedipal stage, the all-out fight to win mom’s affections. Say what you will about debunked Freudian hypotheses. You’ve never lived in a house where your infant scratched your husband’s eyes out, resulting in $4,000 cornea resurfacing surgery.

“Maybe we should have called him Ed,” I said to my husband one night.

“You know, I asked my mom to marry me, too,” my husband said. “None of my brothers ever did.”

But the railing against his father was getting worse every day. My husband’s very presence was the problem. The second he stepped into the room, my son would bristle. Given an invitation to interact with his father, he wanted nothing more than to boss him around. Sometimes my husband would play along, giving our son a longed-for moment of control. But sometimes a kid just has to do what dad says, so Adam took to combating the tiny tyrannical outbursts by enveloping our son in love.

“I can tell by the way that you’re acting that you just need some love,” Adam would say.

[Giant man-to-little-man hug until both of them had lost all the fight in them].

Then, one evening, I walked in on my husband reading to my son in the nursery. My son jumped out of bed to go get another book, and as he scampered out of the room, I jumped gleefully in bed with my husband. We snuggled into our bliss until my son came back. In an instant, my son flew into a rage.

“I was snuggling with mama! I was here first!”

“No, actually, I was here first,” Adam joked. “I have been snuggling with mama for 12 years.”

And then, in a voice channeling that of a movie preview voice-overs: “I’m the one who's with her all day long.”

Clearly he thought that since he had been putting in the time, he deserved the prize. For months thereafter, they battled for position of man in the house. Yelling. Tantrums. Tension every time my husband walked in the room. My husband took it in stride, but I saw it on his face – deep sadness and the feeling that he was unwelcome in his own home.

“You know, Daddy’s thinking about you all the time,” I said to my son one day, trying to plead my husband’s case. And he was. He had never given up trying to forge a relationship with his son. But my son got that glow in his eyes, that moon-faced look of connection.

“And I’m thinking about you,” he said.

Do you pull back? Do you try to love less? Make yourself less lovable? Do you scale back how much time you spend with your children and start going on as many dates as possible to show who has that part of your heart? This was not the approach we took. For more than a year, we let him act out his mythical tragedy. We let him be this hero, even though this one was one doomed to fall. We let him love me, we let him try to destroy his father, and all we did was love him back.

Then, one day, not long after we had decided Oedipus was welcome in our home, that stories are instruction and meaning, a compass and not some kind of omen from a shadow world of literature, I sat with my son in his bed for a special time we call Pressing Questions, in which he is free to talk to us about anything and everything under the sun.

He had passed through it. Within weeks, he’d be biking with dad, preferring his friends, and needing me in a way that reminded exactly no one of Greek tragedy. I can’t say we experienced any particular catharsis watching this play acted out in our living room, but now it’s a classic I know by heart.