Natalie Merchant: "When I talk to friends who have creative lives and children, we commiserate about all the time we wasted in our youth"

"I have to make appointments with my muse to meet at 3 a.m.," says the singer, with her first new album in 13 years 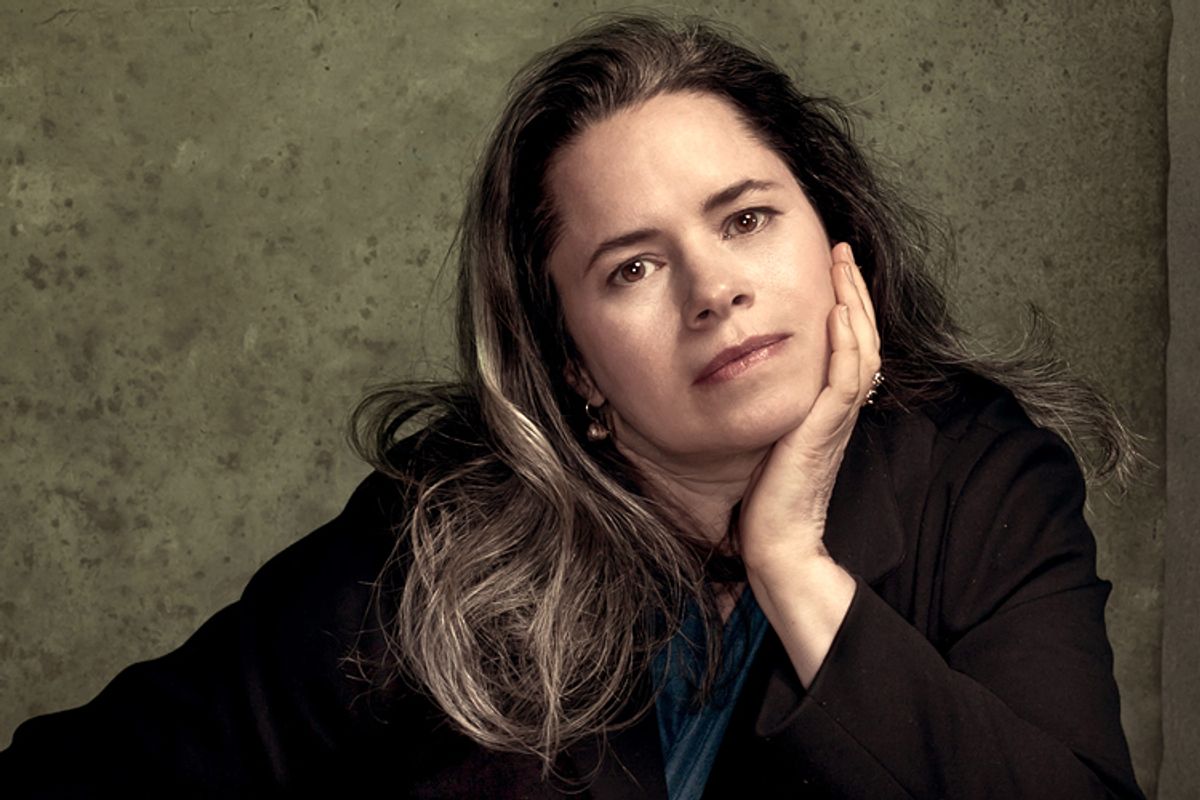 “I don’t get to see as many films as I used to,” says Natalie Merchant. “You’ll find out if you ever have children.” It’s a curious admission, considering that the singer-songwriter has been a film buff since adolescence and has displayed in interviews a deep knowledge of the silent film era as well as contemporary art-house fare. Over the past 10 years, however, the demands of motherhood have curtailed her moviegoing significantly. These days she watches a lot of nature documentaries with her daughter as well as musicals that are “child-friendly but not mind-numbing.”

Occasionally she’s able to sneak away to a matinee while her daughter is at school. That’s how she saw Wes Anderson’s latest. “I saw the ‘Grand Budapest Hotel’ last week and loved it. Normally I wouldn’t like how stylized his filmmaking is, but that’s part of the technique that draws you in.” She gushes about Ritesh Batra’s “The Lunchbox,” from last year: “It’s beautiful and very slow-moving, but it shows you what life in Mumbai today is like for so many people. I highly recommend it.” (In the 1990s, I read a Spin interview in which she revealed that her favorite film was Wim Wenders' “Wings of Desire,” which quickly became — and remains — my own favorite film.)

Merchant’s love of cinema has informed the music she has made first as the frontwoman for the collegiate pop group 10,000 Maniacs in the 1980s and later as a solo artist in the 1990s. Her songs are often driven by character and story, with vivid, often historical settings and an emphasis on visual imagery. Often described as literary, her songs are actually cinematic, ranging from the kitchen-sink drama of “Like the Weather” (off 1987’s “In My Tribe”) to the widescreen apocalypse of “It’s A-Coming” (off her new album, simply titled “Natalie Merchant”).

Adapting their name, somewhat perversely, from the wonderfully schlocky 1964 B-movie by famed goremeister Herschell Gordon Lewis, 10,000 Maniacs emerged in the early 1980s out of Jamestown, New York, with Merchant playing the role of enigmatic frontwoman singing about Kerouac’s worried mother, Depression-era farmers, Western imperialism in Africa, and falsely accused prisoners. Despite the gravity of the subject matter, the band garnered a devoted following into the 1990s, notching a hit single with “These Are Days,” the theme of every prom held during that decade. At the peak of their success, Merchant left the group to pursue a solo career. “I didn't want to have to consult with all these other people,” she told Entertainment Weekly. “I didn't want art by committee anymore.''

As a solo artist, her output has come less regularly; rather than heed the industry mandate of releasing a new album every two years, Merchant has recorded when the muse hit. Her latest album is her first collection of original songs in 14 years. In the meantime she recorded a collection of folk tunes and a double album of children’s songs, but the realities of being a parent took precedence over the work of being a songwriter.

She continued to perform, often for charity benefits. In 2013 she produced and appeared in a film called “Shelter,” which documented a concert to raise awareness of domestic violence. Music, she says, was key to that project. “If the event was just people speaking about the issue,” she says, “people wouldn’t attend. And if they did, they would be overwhelmed. The women who run the shelters say they can clear an entire table at a party. Nobody wants to talk about this issue. But the music fights the tendency people have to shut down. They can receive the information with an emotional component. After the film premiered, the shelters received an unprecedented amount of unsolicited donations, some very creative: not just money, but furniture and clothing and free lessons for children.”

As Merchant prepares to launch her first tour in years for the new album, she spoke to Salon about the characters in her songs, the forbidding process of writing lyrics, and her changing relationship with her back catalog.

There are a lot of proper names on this album: Ladybird, Lulu, Maggie. Are these real women or fictional characters?

What inspired you to write a song about her?

I just think she had an extraordinary life. Now that I’ve reached 50, I feel like I’m beginning to understand the journey that people take through their lives — the significant events that make you and form you. I’ve always had an interest in biographies, especially about famous women. I want to know so much about them. Did they have children? Did they have conflicted relationships with their parents? Did they have to move frequently? Were they drawn to urban spaces or rural spaces? What inspired them as artists?

I read Louise Brooks’ autobiography a couple of years ago, “Lulu in Hollywood.” I grew up near where she spent the last 20 years of her life, in Rochester, New York. My best friend Mary Beth and I used to have a fantasy. We couldn’t drive, but when we were teenagers we wanted to take the bus to Rochester and have tea with Louise Brooks. The song echoes that sentiment, but reading her autobiography allowed me to visit her in a different way. She never had children and could never keep a marriage together, and she felt like a failure in her career. Yet she endures. She rose and fell and fell and rose again. And just when she was at this low period in her life, when she was living hand to mouth and living in a studio apartment in Manhattan, there was a revival happening of her films. She didn’t even know it.

It sounds like you write out of empathy, as though you’re trying to figure out what it’s like to be other women.

Definitely. That sums it up. There’s a lot of portraiture on this particular album. Sometimes I use first-person pronouns, which lets me step into somebody else’s skin and try to speak for them. Other times I try to speak a dialogue with the character. Only on rare occasions is there an omniscient voice. Even in “Go Down, Moses,” I use first person because I feel like people are drawn in when you tell a story. This happened to me. Oh, really? This is how I felt. This is what I saw.

People are always more apt to pay attention when there’s a narrative, I think, and some kind of character development. What I find to be the real challenge — the real puzzle in songwriting — is that you only have a short amount of space and time to develop a character and tell a story. The arc is so tiny. But it feels so gratifying when you write that fourth or fifth verse or that one line that sums up so potently the essence of the message. It’s tough, though. I used to say that I would rather do hard manual labor than write lyrics. That’s partly why I made folk records and adapted other people’s poems, because I just couldn’t face the gulag anymore.

How did becoming a parent change your songwriting process? Did that make it easier or harder?

My technique was completely altered by motherhood. I don’t have huge expanses of creative time like I used to have. I would put myself in a self-induced trance for days, and it was blissful — just alpha waves humming. It was great. Now I feel like I have to make appointments with my muse to meet at 3 a.m. So much of this new record was written during stolen moments in the middle of the night, whenever I could get away. During the day, when I’m doing laundry or making dinner, I’m not humming melodies or writing down lines. I have to sit and focus on the process, but finding the time to do it is so difficult. I blew so much time before I became a mother. I could have written novels, with all the time I used to have. When I talk to friends who have creative lives and children, we commiserate about all the time we wasted in our youth. Now time is the most precious thing in my life.

It’s been 13 years since you released "Motherland," your last album of original songs. Were you writing throughout that time, or did these songs present themselves more recently?

No, this is a survey of 14 years of songwriting. And some brutal editing. In the last 14 years, I’ve written about 35 songs, in addition to the 50 adaptations of poems. I stayed busy. It’s not uncommon to start a song and then have a verse or a chorus that eludes me for years. “Giving Up Everything” was one of those. I had to work hard to economize the language to get to the point of the song. I was really satisfied when I wrote the line, “I mercy-killed my craving.” Some of these songs took years before I was satisfied. I can write 30 verses and only use four.

How did some of those older songs evolve during that time? Did you find yourself relating to them differently?

Some of the older songs changed completely. It’s like going back and rereading a novel. When you read a novel in your 20s, and then you reread it in your 40s, you have so much more life experience to draw from and apply to the writing. I used to read about estrangement in Tolstoy or Dostoyevsky. [in thick Russian accent] He had been estranged from his father for 15 years. Now that I’m 50, I know how long 15 years really is. To have a conflict that long is serious. I feel like I matured during the process of writing this album, but it’s not like going back and reading entries from a 16-year-old girl’s diary. When I wrote the songs for “Motherland,” I felt like I’d really discovered my voice and had figured out how I wanted to go about making songs.

What is your relationship to songs that predate “Motherland” then? Do you find satisfaction in old 10,000 Maniacs songs or in tunes from earlier in your solo career?

Even in 10,000 Maniacs there are moments like that. Sometimes I feel like I wrote songs that I didn’t quite understand in the moment when I wrote them. I didn’t completely understand what I was writing. I was just using language I thought was appropriate, but the meaning only really revealed itself to me later. Or it deepened.

I think that’s true of “Wonder,” because I’ve met so many people who have a strong attachment to that song because they gave birth to children who have physical and mental challenges. I wrote it when I didn’t have a child, and I didn’t know how deeply it was going to be received by people. I’ve met doctors and nurses who tell me that the lyrics can be found posted in preemie wards and in nurseries. It’s become an anthem for children with challenges. When the Hole in the Wall Gang Camp had their 25th anniversary campaign, they used “Wonder” as their theme song, and I went to the camp and sang it with about a dozen kids who were going through chemotherapy and multiple surgeries. They expressed so much joy when they were singing.

So the songs really change when they leave my hands and go out into the world. And I hear stories from people about the relationships they have with the songs, and that changes their meaning for me as well. It’s very interactive.