“I was hurt”: How white elite racism invaded a college debate championship

Korey Johnson and Ameena Ruffin mastered the rules of debate, and broke them skillfully. Here's what happened next 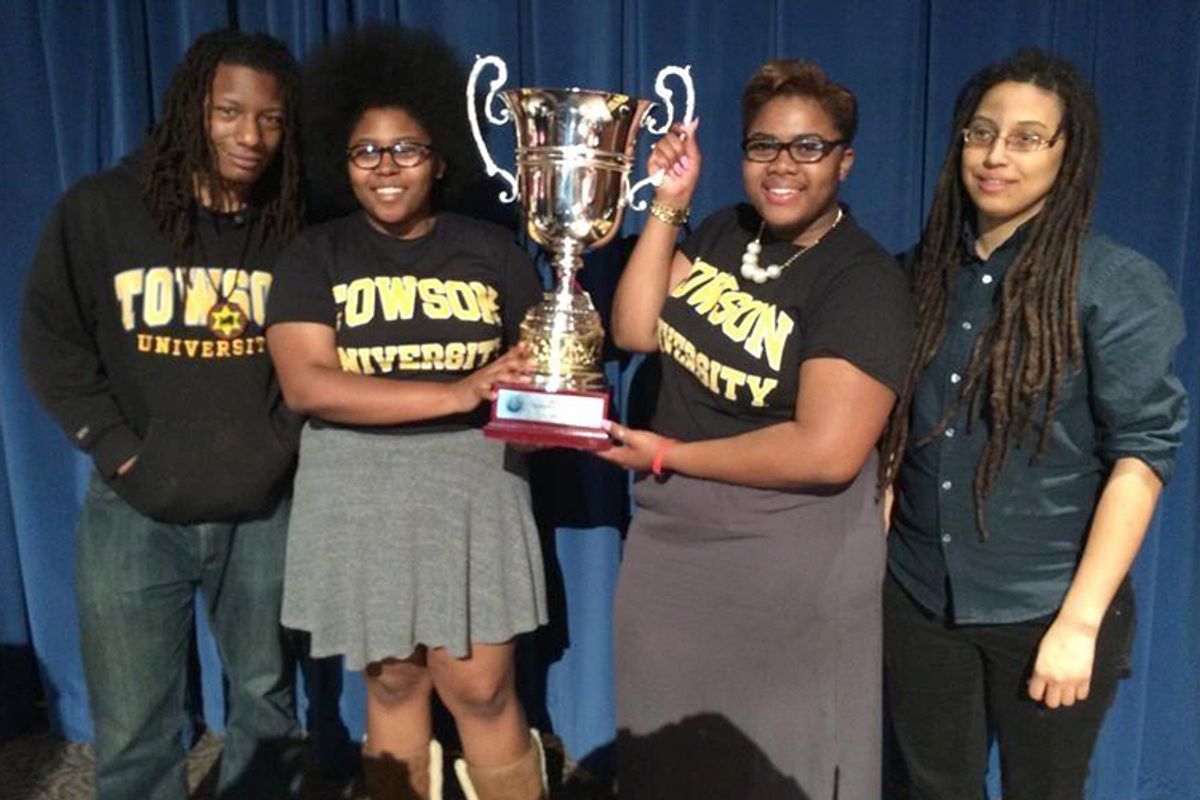 Unfortunately, Johnson’s and Ruffin’s auspicious victory has been marred by right-wing trolls in the debate community and well-meaning white liberals, too, who have mischaracterized and minimized their victory, attributing their win to white liberal guilt, rather than meritorious performance. The Council of Conservative Citizens, a contemporary iteration of the racist White Citizens Councils of eras past, penned an article called “Black female debate team wins national tournament to make up for white privilege.” The Council of Conservative Citizens appears on the Southern Poverty Law Center’s list of racist hate groups. The Daily Caller accused the “far left” judges who voted for these women of destroying college debate clubs via false accusations of racism.

I shared news of Ameena’s and Korey’s championship in my social networks with special pride because this coming fall will mark my 20th anniversary as part of the policy debate community. I made the debate team as a precocious 13 year-old high school student, and have remained a part of that community in one form or another as debater, coach, debate camp instructor and tournament judge, for the last two decades.

Other than the influence of my fourth grade teacher, I give no other academic experience more credit for informing how I think, write, research and communicate. But when I debated in high school in Louisiana in the 1990s, my debate partner and I were the only all-Black girl debate team that I ever encountered, and one of only a handful of all-Black teams we ever encountered at either the state or national level.

The rise of the Urban Debate League movement in the late 1980s helped to diversify debate at both the high school and college level by providing debate instruction and attendance at camps and tournaments for free or for significantly reduced costs. I have worked with three such leagues in Baltimore, Atlanta and Washington, D.C. Korey and Ameena learned to debate in the Baltimore Urban Debate League, many years after my tenure as a volunteer there.

The increasing racial diversity of college debate is directly attributable to the work of these leagues, but of course the presence of more Black folks in any space also fundamentally challenges the ground upon which business proceeds. Black students have not only excelled at traditional debate, but they have invented new modes of competitive forensics, including a more performative style of debate that incorporates rap music, poetry and personal anecdotes.

Pioneered in college debate programs like that at the University of Louisville, this more performative style of debate has productively disrupted the traditionalist forms of debate centered on spouting, at the highest rates of speed, copious amounts of academic literature in order to prove a point. When I spoke with Korey by phone about this piece, she was hesitant to characterize her and Ameena’s style in a singular way, since they tend to incorporate both traditional elements like the reading of arguments published in academic journals and books with newer elements like poetry. Korey told me, “The word ‘traditional,’ the word ‘performative,’ the word ‘k-debater’ (which refers to “critique” or “kritik” debaters, who argue more philosophical rather than policy positions) will never actually capture what we are trying to do here.” That resistance to labels, and ambivalence about “the violence labels perform,” are hallmarks of the speech of young thinkers, searching to find their way in the world.

However, as my own scholarly research about Black female public intellectuals in the 19th and 20th centuries indicates, we live in a world that still struggles to see Black women as serious thinkers and intellectuals who have something to contribute to our national grappling with social problems. Frequently for young Black women thinkers, particularly those who invoke a clear Black feminist perspective, there is a resistance to donning a stance of detached objectivity. Korey asked me rhetorically, “How can we talk about policy if we don’t know [the] social location of the people?”

When I watch Ameena’s and Korey’s final round (video here), in which they are debating against two young Black men from the University of Oklahoma, I am struck by the courage of their propositions. This year’s topic, as are the topics for every year, is situated right at the heart of both national and global political conversations.

Resolved: The United States Federal Government should substantially increase statutory and/or judicial restrictions on the war powers authority of the President of the United States in one or more of the following areas: targeted killing, indefinite detention, offensive cyber operations, or introducing United States Armed Forces into hostilities.

In the final round, the Oklahoma team, who took the affirmative side, offered a performative argument that “war powers should not be waged against niggas.” Using the colloquial form of the n-word, they sought to disrupt the very assumptions of the resolution, by placing the relationship between race and U.S. militarism front and center.

The intrinsic moxie and audacity of this kind of argument exposes the flaws in traditional forms of debate performativity. In part, they demonstrate that an investment in cool, detached, dispassionate forms of speech about political matters of such import could in their own way be considered pathological and imperialist.

Using a range of academic work, Johnson and Ruffin offered a counter argument  that “we should not present scenes of suffering within the academy… because the academic machine will become a spectator that merely feeds its libido by consuming pain narrations." Furthermore, Johnson writes, “we said that when we tell narrations of pain and suffering to black youth as a means of survival, this inhibits their political imagination because they can only envision similar violences happen[ing] to them.”

So here’s the thing: I am not litigating here whether Ameena and Korey are right, although I do find their arguments compelling. Pushing for alternative ways for Black people to exist and thrive in hyper-militarist regimes is important political work, work that both final round teams are engaged in. Still, this is a conversation about how it is the case that in the face of such clearly sophisticated argumentation from two second-year college students, those on the right could then conclude that they won the debate out of white liberal guilt.

To mischaracterize and diminish their accomplishment is the height of white elitist racism, and it is deeply rooted in an anxiety about the ways that Black people and Black forms of knowledge production fundamentally shift the terms of political discussion.

In addition to hyperemotional rants from middle-aged white men and dishonest journalistic coverage from right-wing sites, some white members of the debate community have even gone so far as to try to start a new, segregated “policy-only” debate league. Jessica Carew Kraft notes in a piece at The Atlantic that one of the effects of these new forms of debate is that traditionally dominant teams from elite universities like Harvard and Northwestern are now routinely unseated by teams from smaller colleges, with smaller budgets. After a strident backlash within the debate community, this attempt at race and class-based segregation thankfully failed. Korey noted that the initial move sounded like something straight out of the “Civil Rights Movement.”

And she is right. The move to segregate debate, not on the explicit basis of race, but on the basis of supposedly “race-neutral” ideas about style and substance is part and parcel of a larger more insidious national backlash against integrated education. Not only has the Supreme Court suggested implicitly through its gutting of affirmative action that the success of these programs means federal oversight is no longer mandated and vigilance about ameliorating racial inequality is no longer required, but Nikole Hannah-Jones also lays out quite profoundly the ways that the white middle class have responded to decades of federally mandated integration by pulling their children out of successful public schools and enrolling them in elite private schools. The thinking seems to be that when programs to reduce racially disparate impacts actually work, then it’s time to kill them.

Ameena and Korey are being targeted because they mastered the rules of the debate world and then broke the rules masterfully.  In a world where many of their college counterparts believe the myth of meritocracy, it is incredibly important to point to incidents like this to demonstrate that even when African-American college students are meritorious, their qualifications are challenged, and accomplishments maligned.

Frequently, Black success is met with white temper tantrums and passive aggressive attempts to resituate power through calls for a return to “tradition.”  It is not coincidental that this backlash has reached a crescendo over the last two years when African-American debaters won the championship both times and when, in the case of the 2014 tournament, both the semifinal and final rounds featured all-Black debate teams, using both traditional and performative methods of debate. Rather than seeing these recent successes as evidence of successful integration of a traditionally exclusionary sport, sponsors of elite programs now advocate for a return to exclusionary practices.

Although Korey and Ameena won their championship by challenging their opponents not to engage in copious narrations of Black suffering, it bears noting that racism hurts. When I asked Korey how she felt about all the negative attention she received, in classic strong Black woman fashion she told me, “Haters gon’ hate.” That is of course true. But then, as she grappled with the  “material reality of anti-Blackness,” another truth set in. “I was hurt,” she told me,  “because I had that little bit of bad faith,” by which she meant, a little bit of awareness that there were going to be people not happy about her victory.  “We did so much to be here,” she said and then recounted the two months she spent preparing an argument by reading doctoral dissertations and academic journals, to find the perfect set of arguments to wage in response to one team, her final round opponents from Oklahoma.

Incivility now dominates U.S. public culture. But the critiques that these Black debaters make about the falsity of civil discourse, about the ways that calls to civility mask fundamental relations of power and acts of violence, is deeply in the center of our national conversations in this moment about how we engage in every space from politics to social media. Though the styles and arguments these debaters bring to the table absolutely disturb the peace, the reality is that Black people who speak up in white spaces are an intrinsic disruption to the status quo. We should recognize and applaud the courage of these young thinkers who boldly step into inhospitable spaces and speak truth to power. Our nation certainly needs more people like them.