Used to hideous remarks going unchallenged by sycophants, here's why his “apology” last night was such a fiasco 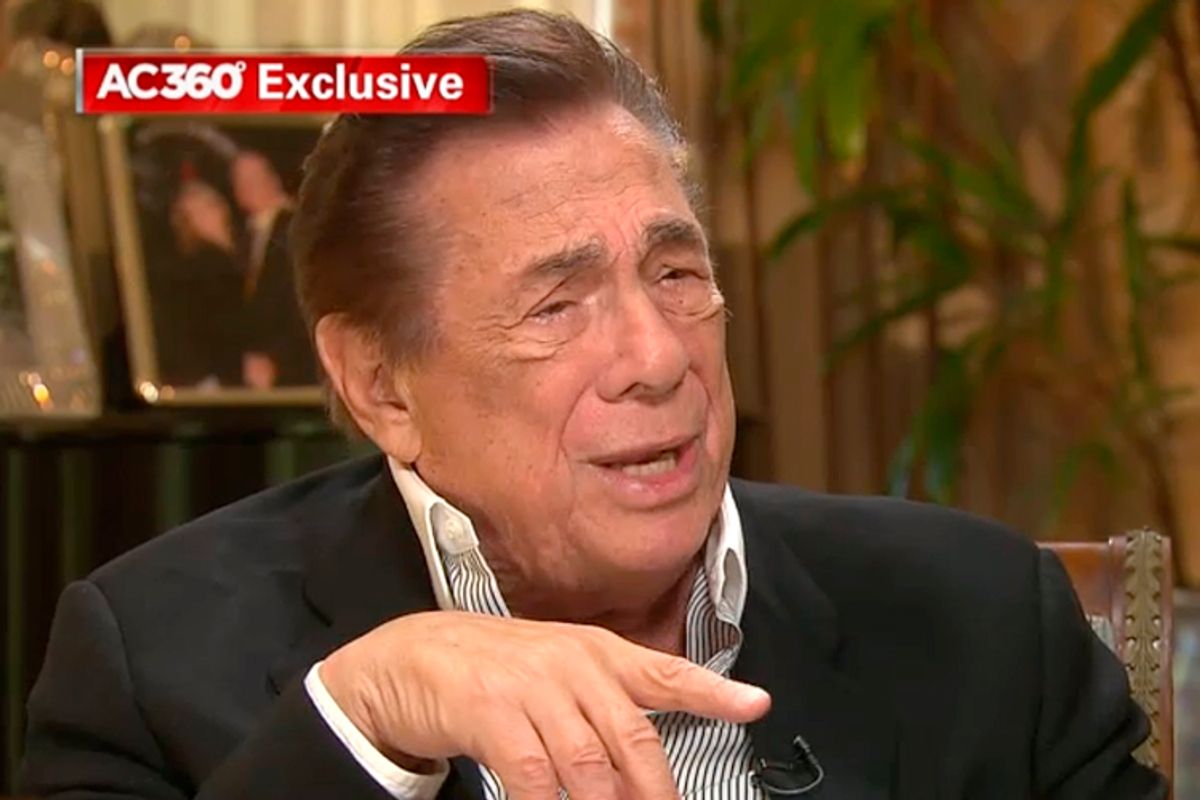 Donald Sterling, in all his reprehensible anti-glory, is officially representative of only one person, Donald Sterling. But it was hard not to think about the insularity and cossetting the super-wealthy enjoy, once they get super-wealthy, watching the maligned Los Angeles Clippers owner self-destruct with Anderson Cooper Monday night.

Sterling is a man who is obviously used to holding forth on his mind-blowingly prejudiced views without challenge. He wants us to think V. Stiviano entrapped him with her magic lady parts -- “I don’t know why the girl had me say those things,” he told Cooper -- and got him to launch a paranoid racist rant out of lust. But clearly that is not true, unless he’s lusting after Anderson Cooper.

“I’m not a racist,” Sterling told Cooper. “I made a terrible, terrible mistake. And I’m here with you today to apologize and to ask for forgiveness for all the people that I’ve hurt. When I listen to that tape, I don't even know how I can say words like that.... I mean, that's not the way I talk.” Actually, it seems to be exactly the way Sterling talks.

It’s hard to know where to start with the NBA franchise owner’s outrageous remarks. He called Stiviano “a street person” and said Magic Johnson “ought to be ashamed of himself.” No, that doesn’t do Sterling justice. This is what he said about Johnson:

Here is a man, he acts so holy. He made love to every girl in America in every city and he had AIDS. When he had those AIDS, I went to my synagogue and I prayed for him.

“Those AIDS”? (For the record, Johnson has HIV, not AIDS). But it got worse:

What has Magic Johnson done? He's got AIDS. Did he do any business? Did he help anybody in south L.A.? I think he should be ashamed of himself. What does he do for the black people? I'm telling you he does nothing. It's all talk.

I spent millions on giving away and helping minorities. Does he do that? That's one problem I have. Jews, when they get successful, they will help their people.

For the record, Magic Johnson has a foundation that gives away almost $2 million a year and got a four-star rating by Charity Navigator last year. A recent Los Angeles Times investigation found little evidence of the Donald Sterling Foundation’s good work. He does reportedly give a lot of money to women he’s trying to bed.

For his part, Johnson replied an hour after the interview aired:

Maybe Sterling thought his sit-down with Cooper would help him rehabilitate himself, but at one point he even turned on Cooper. When the CNN anchor suggested that Sterling’s paternalistic comments about his players, that “I support them and give them food, and clothes, and cars, and houses,” had been criticized as reflecting a plantation mentality, Sterling turned on his host: “I think you have more of a plantation mentality than I do. And I think you're more of a racist than I am. Because I'm not a racist, and I've never been a racist.”

“I know you are but what am I” rarely turns out well on national television.

It’s said that Sterling’s sit-down with Cooper was a message to other NBA owners, some of whom he claimed support his crusade to keep his team. (Oh, and he said his players “love” him too.) If Sterling was sending the owners a message in the interview, it had to be: “I want to sell my team right now. Help me.”

NBA commissioner Adam Silver was unimpressed. He apologized to Magic Johnson “that he continues to be dragged into this situation and be degraded by such a malicious and personal attack.” The NBA Board of Governors — Sterling’s fellow owners — “is continuing with its process to remove Mr. Sterling as expeditiously as possible.” It can’t happen soon enough.