"Louie's" girls are tough and scary and know what they want: He killed the MPDG and invented a new type altogether 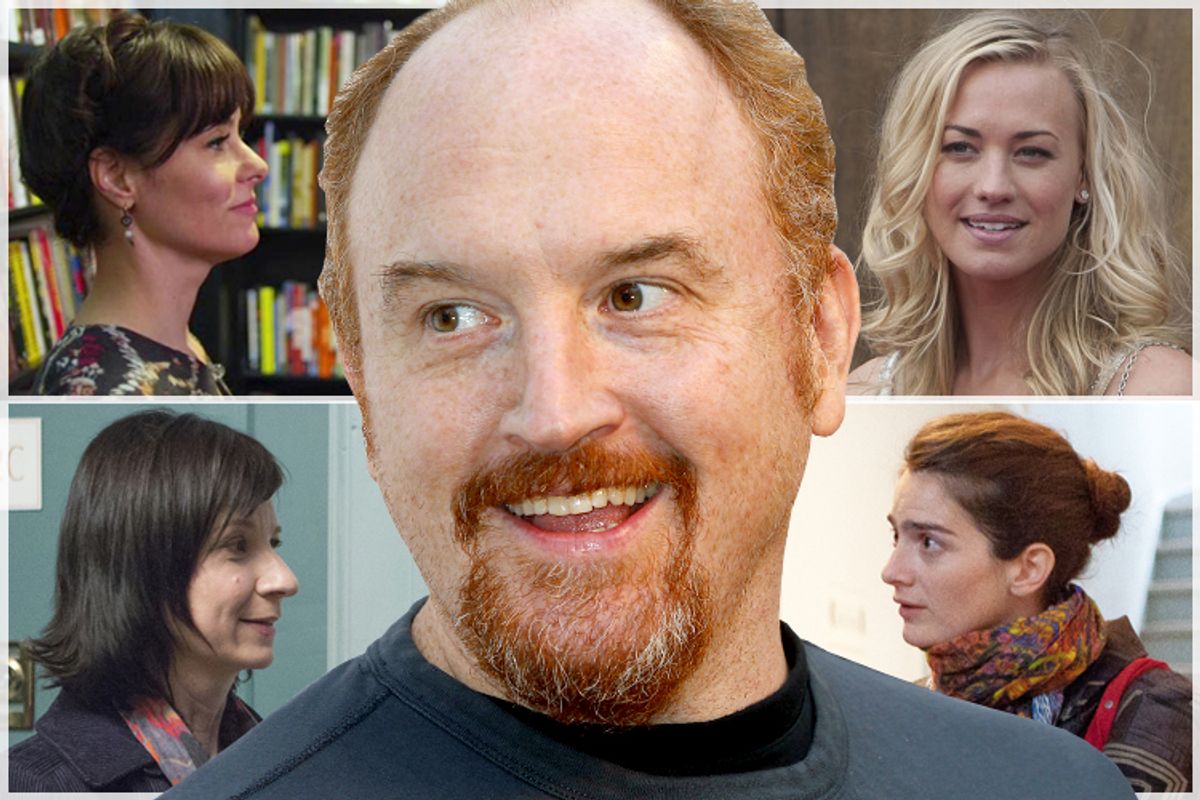 If anyone was going to kill the Manic Pixie Dream Girl, it had to be Louis C.K. Who else but our reigning skeptic, destroyer of widely held delusions, and enemy of the smug “it’s all good” carelessness of American culture, to blow this bit of male wishful thinking out of the water? As far as C.K. is concerned, it is definitely not all good. The woods are not filled with dream girls and fairies and magical unicorns. They’re filled with loud garbagemen and spoiled children and chubby dudes who pointlessly consume two meals in one sitting.

And without a doubt, the Manic Pixie Dream Girl’s time has come. This plucky, delightful muse was first introduced by Nathan Rabin at the AV Club as a love interest who “exists solely in the fevered imaginations of sensitive writer-directors to teach broodingly soulful young men to embrace life and its infinite mysteries and adventures.” But the MPDG has always had a special talent for generating contempt. Whether she takes the form of Natalie Portman in “Garden State,” Kirsten Dunst in “Elizabethtown” or Zooey Deschanel in pretty much anything, she is an admonition to “Lighten up!” (and “Carpe diem!” and “OMG look at the stars!”) in human form. Her dewy skin, her irrepressible joy at being alive, her giant doll eyeballs that are not the least bit bothered by that thick fringe of bangs stabbing them repeatedly, have an uncanny ability to incite homicidal urges in four out of five regular, plodding, non-pixie-like mortals.

Taken as a whole, “Louie’s” Manic Bossy Nightmare Girl not only deals a fatal blow to the MPDG, but is a brilliant inverse of that old “Seinfeld” formula that took a perfectly attractive, likable woman and gave her one trivial but still fatal flaw. Jerry would be happily dating a nice woman, and then he’d make a discovery: She has man hands. Or she’s a low talker. Or she only looks good in certain lighting. Or she’s a masseuse, but she refuses to massage him. Game over.

But instead of one flaw, “Louie’s” MBNGs are terrifying funhouses of wall-to-wall flaws with just one redeeming quality -- at least from a single-guy-on-the-town’s perspective. Unlike Seinfeld, who was usually drawn in by great looks and a good attitude, Louie is often repelled from the very start. Think of that moment when Louie tries to make conversation over dinner after he’s awkwardly set up with Laurie (Melissa Leo in nail-spitting form). When Laurie tells Louie she owns a landscaping business, he replies, “Wow, so you, like, own your own business.” “Yeah, that’s what I just told ya,” Laurie growls, rolling her eyes and flashing her friends an incredulous look. The MBNG turns the tables on “Seinfeld’s” sampler platter of single women, appetizing lovelies with trivial flaws that transform them from tantalizing to repulsive in a heartbeat. In contrast, Louie’s MBNG is always the decider, reluctantly tolerating Louie, condescending to him and demanding her due. Louie seems to say, “Yes, she’s pushy and unstable and maybe a little violent – but she’s also sort of unpredictable in an interesting way, so how could I possibly resist?

More often than not, though, the Manic Bossy Nightmare Girl’s one redeeming quality is only that she’ll relent and sleep with Louie despite her reservations. There’s Maria Bamford (playing herself), who takes Louie home to have sex and watch reality TV with him, but when he suggests that she meet his kids, she balks. “What do you think this is, I’m like your girlfriend?” she asks, incredulously. “I’m here for that,” she says, gesturing at his crotch, “And now you’re trying to add features to this thing?” Or, there’s the stranger waiting in her car outside the Comedy Cellar, who tells Louie, “I want to show you my p*****.” She drives him all the way to New Jersey, only to reveal that she expects him to have a three-way with her and her husband. And let’s not forget Gaby Hoffman, who plays Louie’s girlfriend, April, in one of the greatest scenes in “Louie” history. (Hoffman also plays a notable MBNG on "Girls" -- Adam's moody, manipulative sister, Caroline.) April meets Louie at a dinner, then starts to imagine that Louie wants to break up with her, based on his cringing facial expressions, even though he’s barely uttered a sound. Instead of explaining himself, he keeps flinching and looking down at the ice cream melting all over his pie. April tells him not to eat the pie. Eating the pie would be insensitive. Don’t. Eat. The. Pie. Soon, it becomes clear that Louie wants April to break up with him, just so he can finally take a bite of his pie. She dumps him and leaves. Relieved, he digs in.

In this way, even thought the MBNG is utterly different from Seinfeld’s trivially flawed dream girl, both function the same way: They demonstrate just how shallow Louie, Jerry (and mankind at large?) can be in the pursuit of love and companionship. C.K. turns the tables on our assumptions about gender roles by placing Louie in a series of awkward situations that any guy could theoretically encounter. When Laurie and Louie get drunk together, then Laurie abruptly offers Louie a blow job – well, who’s going to say no to that? Then Louie won’t return the favor. Laurie punches him in the face, then threatens to break his finger until he gives in. The scene is queasily off-putting – at least until Louie agrees to go out with her again.

But “Louie’s” MBNGs have always walked a thin line. When Parker Posey appeared as a charming bookstore clerk in Season 3, it was hard not to get excited. Posey, despite her pixie-like prettiness, has been serving up a smart, edgy, screw-you-if-you-don’t-like-me twist on the MPDG formula for two decades now. Maybe Louie had finally met someone to shame him out of his lazy, self-involved ways. Instead, Posey’s character turned out to be very sad and possibly an alcoholic to boot. Naturally, Louie is too wrapped up in what he wants her to be to appreciate who she actually is.

That’s a tension that Louis C.K. pursues often, but it doesn’t always come off without a hitch. In Season 4, C.K. seems determined to push the boundaries even more, and the results range from unsettling to faintly condescending. Which is strange, because who on the entire planet is less patronizing than Louis C.K.? But the mood seems to have shifted.

In the past, Louie’s Manic Bossy Nightmare Girls would get fed up with Louie and kick him to the curb. This season, Louie seems to be the one running scared. His innocent, good-guy status and the impossible unfairness of each situation are emphasized to a distracting extent. In the third episode of this season, a Manic Bossy Nightmare Girl chides him because his set at a charity event bombed. But she’s beautiful, so Louie goes home with her. They skinny-dip and have sex. Louie flashes her looks like she may be emotionally unstable, but he’s not sure he cares either way. Then she tickles him, he says stop, she doesn’t stop, and he elbows or punches her out of desperation (we don’t see him connect). The next thing we know, she’s on life support and her family is suing him for millions. The same “It could happen to you, dude!” feeling of past MBNG episodes is apparent, but this time, the message is hazier. Crucially, though, it’s more awkward than funny.

Likewise with the next episode, where Louie hits on and is rejected by all the women who work at the Comedy Cellar, except one. She’s a charming, slightly short, normal-size girl who hits on Louie repeatedly but he turns her down. Finally, he agrees to go out with her, and she launches into a monologue about the bullshit fat girls have to put up with in life. “You know, if you were standing over there, looking at us, you know what you’d see? That we totally match,” she tells Louie. The sentiments are sympathetic, but the moment is much less nuanced than, say, Louie wanting pie more than a girlfriend, or Louie embracing a double standard about oral sex. The tone is off. In the end, Louie relents and holds the woman’s hand. “Whoa, so is Louie going to actually date a regular woman who looks just like him?” we wonder. Nope. Next episode, this mortal woman is nowhere to be found, and Louie is flirting with his slender, pie-baking, non-English-speaking neighbor.

As the fearless slayer of the Manic Pixie Dream Girl, Louis C.K. may have forced us to raise our expectations of him to unreal heights. And to be fair, “Broad City” and “Girls” also push the boundaries of the Manic Bossy Nightmare Girl, giving us female characters who embrace double standards, sleep around, puff on joints and flaunt their flaws with reckless abandon, naysayers be damned. “Girls” doesn’t entirely sidestep sanctimony and occasional bouts of preciousness. (That cute lil’ dance routine danced at the beach house? Oof.) When you’re reaching for ambitious themes and ideas, it’s pretty tough not to occasionally miss the mark, or forsake laughs for a message, or forsake a message for a moment.

Because he dares to place himself in demeaning situations and break the mold of predictable tropes with his female characters, then put them in new territory, it’s natural that C.K. should stumble here and there, tone-wise. That’s one of the built-in costs of presenting snapshots of male-female relations that are half feminist and half chauvinist, half revolutionary and half regressive. Part of what gives “Louie” its charm is its interplay of idealistic, egalitarian notions and the harsh limitations of cultural biases and our natural (or unnatural) mortal desires. Maybe that’s why the crazy hookup on life support and “chubby” girl asking for a hand to hold both feel a little out of step with past seasons of “Louie.”

Instead of muddling (clumsily, badly) through bad situations, Louie is (innocently) wandering into unfair situations and blinking like a deer in the headlights. Given the fact that his brilliance lies in offering up generic observations then revealing an undercurrent of benign contempt and hostility for everything under the sun, his "Home Alone" face strains credulity in a big way. There’s a faint pandering tone with a sour aftertaste: Louie’s a good guy so he’ll hold your hand, but you can’t expect him to actually date you. Louis C.K. drives us to the edge of the cliff, then backs up, slowly and awkwardly, with a loud, blaring truck-backing-up sound.

But this isn’t “Thelma and Louise.” It’s just “Louie.” Let’s just hope one of these Manic Bossy Nightmare Girls blossoms into a real human being and Louie tries very hard to accept her. Because that would be funny and revolutionary: Depressed, soulless middle-aged man grows up and falls in love with a real, demanding, intense, emotional (but not crazy!) mortal woman. And he loves her, wall-to-wall flaws and all.