The tenth anniversary of "Frasier" proves the limits of Internet nostalgia

"Mean Girls" and "Friends" recently inspired countless retrospectives. But why did the social web forget "Frasier"? 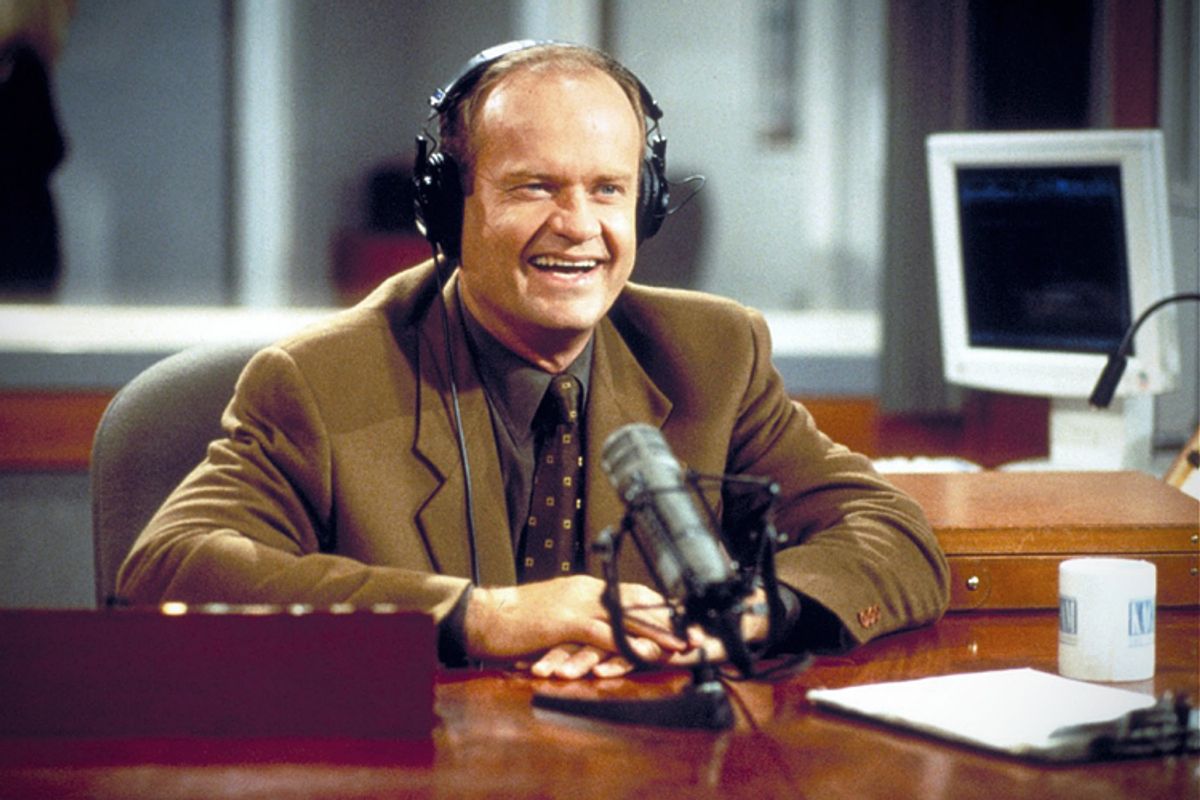 One might be forgiven for thinking it was 2004 again on the Internet in recent months, with both the theatrical release of "Mean Girls" and the finale of "Friends" coming in for lavish and over-the-top treatments across the web. But a week after "Friends" ended, its weirdly underheralded network neighbor "Frasier" did; the ten-year anniversary of the "Frasier" series finale is tonight, not that you've read about it anywhere. Why have the intervening ten years been so unkind to "Frasier," a show that was, at its peak, hugely popular?

After all, "Frasier" has more Emmy Awards than any series other than "Saturday Night Live" (which has the advantage of decades on the air); it was a consistently highly-rated series that was widely-known enough that Frasier's dad's dog ended up on the cover of Entertainment Weekly. How did "Frasier," which is still on-air in syndication, lose its frisson as an object of conversation? Why isn't it a trending topic today?

Part of this may have to do with the show's format. "Friends," comforting though it may be, was radically different from most shows that had come before -- rather than focusing on a workplace or a family, "Friends" featured a cast of interconnected pals who had no real reason to see one another daily. Nothing Rachel, Joey and the gang ever did seemed like drudgery. It was a vision of aimlessness that held an obvious appeal to young kids watching TV, the same young kids who, ten years later, are exactly the right age to be junior entertainment writers for websites or junior employees at desk jobs surfing the web all day.

By contrast, "Frasier" was a workplace show and a family show; it was basically a series entirely about obligations. Frasier Crane, like his brother Niles, is an aesthete who'd like to focus entirely on going to the opera and buying objets d'art, but must degrade himself by appearing on a cheesy commercial radio station in order to pay the bills. He's a bachelor -- the somewhat sleazy-sounding word fits -- who'd love to go on dates with all of Seattle's most eligible ladies, but must play roommate to his ailing father and his father's much-hated dog. Even at its very best, "Frasier" was a series defined by the indignities visited upon pompous Frasier, whether at a dinner party or during a night at the symphony. It was, or could often be, very funny, but Frasier's antics could also be a lot to take.

The sort of anniversary that can easily be celebrated on the social web tends to come with minimal baggage. "Friends" is a breezily fun show to watch; "Mean Girls" is a well-made but uncomplicated teen comedy. "Frasier" was, for a comedy, fairly difficult viewing -- and, too, a series that completely decompensated by its end. Maybe if it had ended after five to seven seasons it'd be remembered as one of TV's smaller-scale gems. But to celebrate the finale of "Frasier" is to celebrate a series that, by the time it wrapped up, had totally lost control of its plot.

"Frasier" never had the oddity of a "Friends" or a "Seinfeld," where characters could be entertaining with their spiky, unique chemistry. The ways the characters interact -- father-son, brothers, boss-employee -- are well-done, but familiar to the point that one doesn't need to be nostalgic for them. They show up on TV season after season. Why would anyone miss something that at its very best is well-executed television and at its worst was boring television? "Frasier" was so generally competent that its best moments blur together, while its worst were mildly annoying or boring. One remembers particular storylines or jokes from "Friends"; one remembers a general "Frasier" mien of highbrow humor and frustrated aristocrats without any specifics.

It is easy to see why certain anniversaries, in particular, have been so widely remarked-upon: "Mean Girls" was a movie that directly appealed to people who are the right age now to be junior entertainment writers at websites, while "Friends" was, more or less, the last wildly successful network sitcom (probably) ever. The end of "Friends" ten years ago was a chance for reminiscence about one of the very few things in our culture that everyone experienced together and basically had positive feelings about. "Frasier" proves that the sort of entertainment for which the public feels most nostalgic makes the unusual seem comforting, so that the memories go down easy. "Frasier" did perhaps a harder thing -- taking the forms of traditional family sitcoms and larding them with highbrow references and baroque character traits. It's an admirable feat, but clearly not designed to go viral.