Wayne Coyne has gone mad: Time for the Flaming Lips singer to stop being a monstrous jerk

A man-sized toddler who throws tantrums for attention? No, not that "King of Queens" guy. It's Wayne Coyne 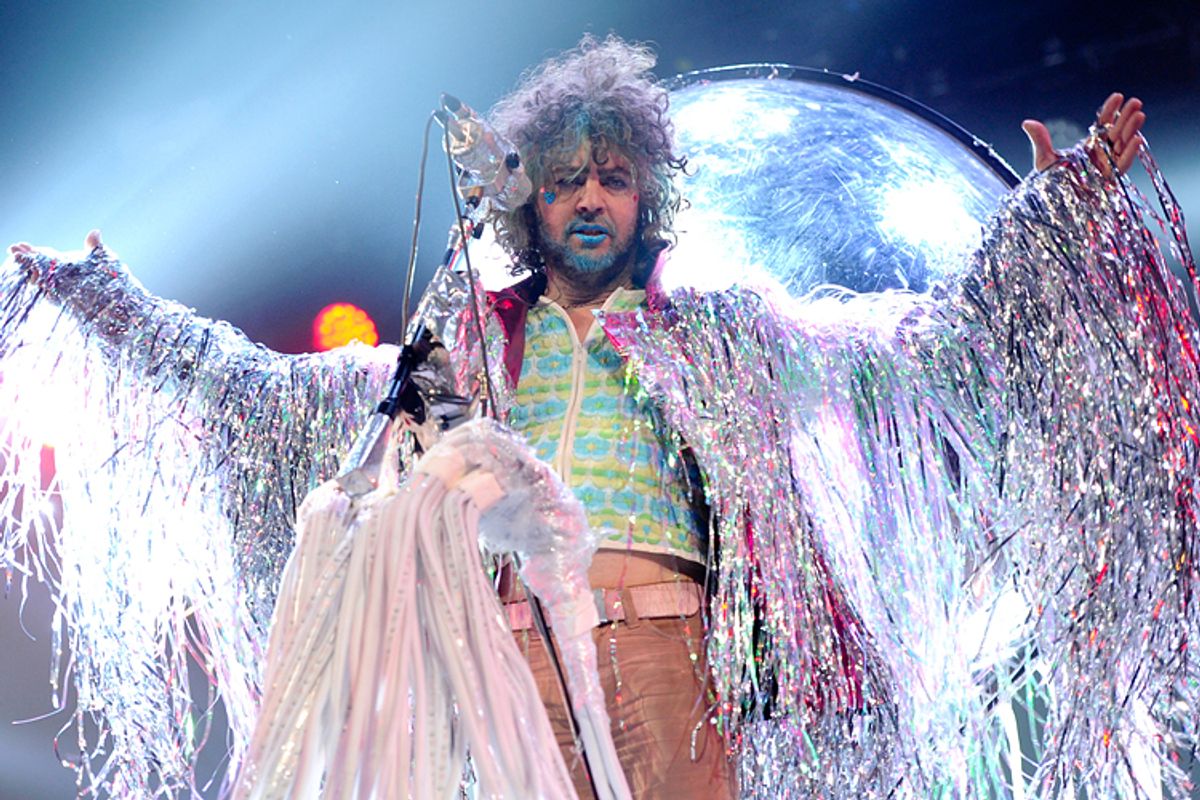 Enough, Wayne. Where Wayne Coyne and the Flaming Lips were once known for their music, trippy videos and incredibly fun live shows featuring Coyne walking around in a human hamster ball, onstage dancers in animal costumes and confetti — so much confetti — things have recently gotten weird, and that’s saying something. Coyne has spent the past few years acting out in public like a man-sized toddler who favors supermarket tantrums for the attention.

The latest is a nasty public feud with former Flaming Lips drummer Kliph Scurlock, whom Coyne fired this spring. Scurlock and Coyne have been trading who’s-the-bigger-jerk barbs in the media, but they agree on the gist: Coyne dismissed Scurlock after the drummer criticized the singer’s friend Christina Fallin, daughter of Oklahoma Gov. Mary Fallin, for posting a photo of herself wearing a Native American headdress. Scurlock has since told Pitchfork he had endured years of verbal abuse from Coyne, while Coyne told Rolling Stone that Scurlock is a “pathological liar” who “just wasn't a very significant musical part of the Flaming Lips anyway.”

Harsh. But it’s hardly the first time some Flaming Lips sideshow has become the main focus. There have been hints over the years that maybe Coyne didn’t fully square with the beatific force-for-positivity image he has projected, like the mean-spirited shot he took at Beck for allegedly being a dick, and the more recent insults he’s lobbed at Arcade Fire (who, in fairness to Coyne, can be pretty pompous).

Perversely, his casual trash-talk is part of a pattern of behavior that seems designed to illustrate how carefree and quirky he is, like the time in 2012 when Coyne tried to clear security at the Oklahoma City airport with a (disarmed) hand grenade in his luggage, prompting a lockdown. Oops, haha, how silly. He managed to piss off Erykah Badu earlier that year when he released a rough version of what she called “a tasteless, meaningless, shock-motivated video” that showed her sister nude without her approval. He’s also been kicked off Instagram twice for violating the photo-sharing app’s guidelines by posting naked photos.

Then there are the music-related gimmicks, like unnecessary song-for-song covers of albums by Pink Floyd, the Beatles and the Stone Roses. Coyne has also teamed up with the likes of Kesha and Miley Cyrus, collaborations that seemed calculated more to generate blog buzz than to result in some lasting creative statement. The same goes for pulling in Yoko Ono or My Morning Jacket singer Jim James for the band’s 2012 release “The Flaming Lips and Heady Fwends.” Though the album had its moments, it’s fair to wonder whether Coyne was actually interested in recording with the people who contributed, or whether he just wanted to show off the company he keeps. (It could be both, of course.)

Even the Flaming Lips’ choice of packaging materials screams publicity stunt. Every Record Store Day brings some fresh new hell: a 24-hour song packaged on a hard drive inside a real human skull (just $5,000!), or a few new tunes on memory sticks encased in gummy candy skulls, or in a gummy fetus. At least there was ostensibly a sonic reason behind the format of “Zaireeka,” the band’s 1997 release with eight songs split among stereo tracks on four separate CDs.

As demonstrated by “Zaireeka,” the human hamster ball and, hell, the video for “She Don’t Use Jelly,” there’s always been an element of oddball showmanship in what the Flaming Lips do. But at least there was usually interesting, and sometimes downright glorious, music underpinning it. Now the music is practically an afterthought as Coyne chases after the public spotlight for his fame fix. He's like a cult leader who doesn't believe his own mumbo-jumbo anymore and just keeps spouting it because it helps with cash flow. Sure, it’s a living, but it has to be a dreary one, especially because the mumbo-jumbo was just so good when he believed it.