Goodbye to "Two and a Half Men," TV's grossest show

It was raunchy and depicted sex as scary -- all at once. Here are a few of the show's lowest moments 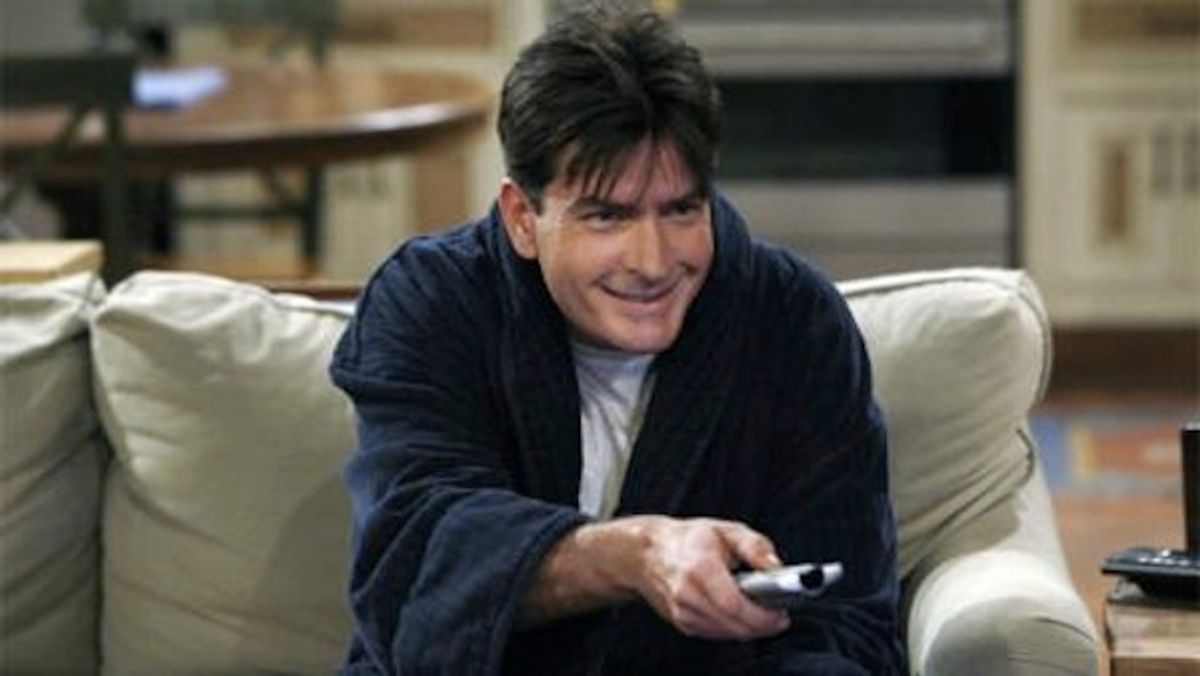 Charlie Sheen awaits the grim specter of death on "Two and a Half Men."
--

The upcoming 12th -- 12th! -- season of "Two and a Half Men" will be the show's last, as the one-time Charlie Sheen vehicle limps off CBS's air to make room for something new. Its impact will be felt, though: "Two and a Half Men," which was nominated for the best comedy Emmy three times, was a pioneer in the field of TV raunch. The series helped make broadcast television even safer than it had been for truly gross comedy -- comedy, indeed, whose grossness was the very point. Created by CBS super-producer Chuck Lorre, the sitcom helped set the standard for the network, which now features "Two Broke Girls'" much-remarked-upon casual racism as well as the general bawdiness of shows including "Mom" and "The Millers."

Here are a few of the show's many low points.

Though the series got praise for its portrayal of a lesbian character -- played by Amber Tamblyn, who subbed in for departed young cast member Angus T. Jones as the "half man," strangely -- the video embedded in this Advocate piece showcases the sitcom's inherent regressiveness, depicting a transgender woman as out to trick a straight man into having sex with her. (Surprise!) But more jarring is the show's  plain unsavoriness. Jon Cryer's character makes a series of puns about sex equated to investment banking, despite how little we want to think about Cryer's, well, deposits, while Tamblyn "breast-feeds" at the other end of the bar. Ick! That the preceding link largely praises "Two and a Half Men" as not that bad just shows how low the standards were.

Ashton Kutcher, the current star of the series, is fully 16 years older than Miley Cyrus. But Cyrus' guest role on the show allowed Kutcher to ogle the pop singer as she "popped the girls out" for some nude sunbathing.

After Charlie Sheen departed the series following his much-publicized breakdown, his character was killed off. Then female characters in tight black dresses attended a funeral just so they could list the STDs Sheen's character gave them. Turns out you can say "vaginal warts" on broadcast TV! Also, after 177 episodes, that the best the show could do to memorialize its star was depict him as a carrier of genital maladies said something more than just the writers' personal disdain for Sheen.

The list goes on -- jokes about a teenager's erection when he meets a character played by Jenny McCarthy, or women and the spooky harridans they are.

What's most striking about "Two and a Half Men's" raunchiness is how mindless it is. A well-told dirty joke can be a lot of fun -- and openness about sexuality is generally a very positive trait -- but Tamblyn's character remarking that a conquest "sucks in bed -- and not in a good way" feels, more than anything, unearned. "Two and a Half Men" portrayed sex as a constant war between men and women, all of whom were out to trick one another into sleeping together and all of whom spoke frankly to the point of vulgarity. "Two and a Half Men" wasn't full of sex jokes because it was sex-positive, it was because sex, to its writers, was something weird and scary! That's what fueled Charlie's nihilistic worldview -- and the show's success.