Inside the secret world of pro wrestling: The media's complicated relationship with a controversial sport 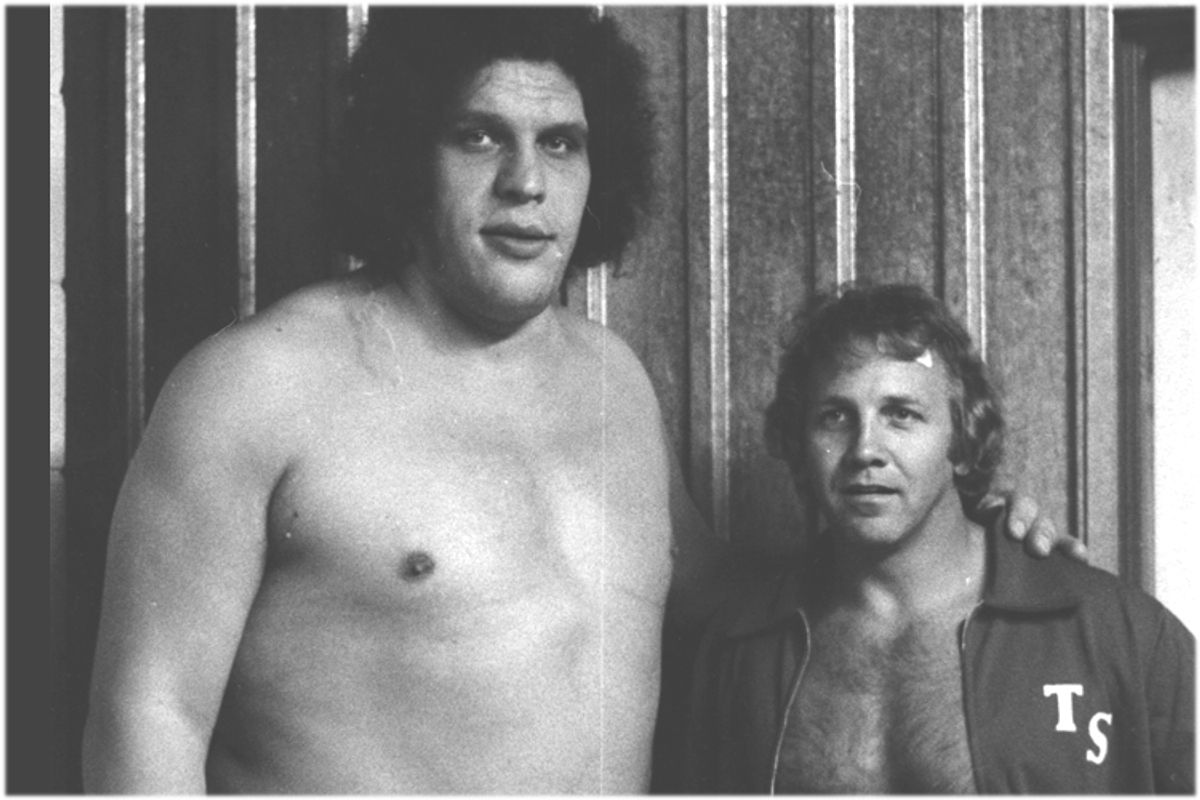 Early in “Andre the Giant: Life and Legend,” Box Brown’s new graphic memoir of the professional wrestler, two French barflies taunt Andre by telling him that wrestling is fake. Andre, always mindful of protecting the business, chases the two men into their car, which he then flips on its side before returning to his bottle of wine.

Andre Roussimoff died in 1993, but “Life and Legend” couldn’t have existed before the late ’90s. Brown’s comic is the most recent piece of art to dig beneath pro wrestling’s facade of reality. It’s a rich vein of dramatic possibility that was rarely tapped before wrestling decided to expose its own secrets to the world.

For most of its history, the biggest sin within pro wrestling was to admit that it was scripted. Wrestlers and promoters maintained a code of silence called “kayfabe,” a nonsense word with roots in pro wrestling’s carnival origins. Kayfabe meant those involved in the business couldn’t acknowledge to outsiders that it wasn’t a legitimate athletic competition. Breaking kayfabe could end a wrestler’s career overnight. Just being seen in public with a story line rival could get a wrestler fired.

Kayfabe crumbled in the ’90s, a victim of the Internet, increased competition and a federal trial that forced Vince McMahon’s World Wrestling Federation to admit that wrestling was scripted. Today McMahon’s renamed World Wrestling Entertainment regularly acknowledges that wrestlers are performers playing characters in scripted story lines. Wrestling now openly positions itself as a form of reality TV more than a competition.

Once kayfabe died, former wrestlers rushed to profit off their backstage stories via ghost-written autobiographies and “shoot” interviews, long sit-down chats that go deep into the office politics and real-life personalities of famous wrestlers and promotions of the past. In 1984 “Dr. D” Dave Schultz attacked ABC’s John Stossel on "20/20" for asking if wrestling was real; 20 years later Schultz became one of dozens of wrestlers to openly discuss the realities of the business in an in-depth shoot interview.

Exposing wrestling’s reality didn’t just open new revenue streams for retired wrestlers or change how the entire medium is promoted. Before the death of kayfabe, wrestling was mostly depicted as a real sport in other media. Movies and TV shows largely adapted the same sort of basic revenge story lines that fueled wrestling feuds. Even though it’s easy to guess that wrestling is choreographed just by watching it, stories set in the world of wrestling usually took that world at face value.

From the old B-movies mocked in the Coen brothers’ “Barton Fink,” to the “Hulk Hogan’s Rock ‘n’ Wrestling” cartoon of the mid-1980s, Hollywood saw wrestling as a theme fit only for entertainment as lowbrow as wrestling itself. 1989’s “No Holds Barred,” Hulk Hogan’s first starring vehicle, was so similar to a standard-issue WWF story line that it was seamlessly adapted into one that summer, as Hogan wrestled actor Tommy “Tiny” Lister at the SummerSlam event. NFL legend Lyle Alzado starred in a syndicated sitcom called “Learning the Ropes” that used footage from actual National Wrestling Alliance matches and that portrayed wrestling as real. Wrestling wasn’t taken seriously as a dramatic milieu because it steadfastly guarded its own fake reality.

Even serious works treated wrestling as if it was a legitimate competition. “Paradise Alley,” a 1978 film written and directed by Sylvester Stallone, portrays professional wrestling like a down-market cousin to boxing, but presents the matches as on-the-level as the fights in “Rocky.” Wrestling is a seedy racket run by criminals in Jules Dassin’s “Night and the City,” but the climactic wrestling match is shown as a true fight.

By the turn of the 21st century, with kayfabe in ruins and wrestlers routinely blurring the lines between their characters and their true selves, an angle for genuine art about wrestling appeared. Darren Aronofsky’s “The Wrestler” and Brown’s “Andre the Giant” aren’t interested in match results or wrestling story lines. They focus on the relationship between a wrestler’s character and his real life.

It’s a truism within wrestling that the best characters are merely amplifications of the performer’s true personality. A fine mid-level villain like the blond pretty boy “Stunning” Steve Austin can become the most popular wrestler ever by playing up his natural attitude and accent as the brash redneck brawler “Stone Cold” Steve Austin. Before kayfabe fell, wrestlers were encouraged to “live the gimmick” — to always be in character in public. That’s why an older performer like Ric Flair, whose money issues were exhaustively chronicled by Grantland a few years ago, still lives well outside his means today in order to project an image of wealth and success. Now that wrestlers admit that the sport is fixed, it is natural to speculate where the character ends and the man begins. Even wrestlers themselves can lose track of the line between gimmick and reality.

This gray area between the character and the wrestler is where art can thrive. Randy “The Ram” Robinson, the washed-up former champ of “The Wrestler,” is a broken relic in a trailer park who only comes alive when he’s performing for his customers at the deli or reliving his glory days in the ring through video games and nostalgia matches in front of a hundred fans. “The Wrestler” is a powerful look at one man’s troubled relationship with his past, and it’s made stronger both by acknowledging that wrestling is performance more than sport and through the verisimilitude of the Ram suiting up backstage at a real show thrown by the independent Ring of Honor promotion. A number of real wrestlers appear as themselves in “The Wrestler,” but through the Ram’s story the movie forces us to question what it means to say that a wrestler could ever appear as himself. Is the real Randy “The Ram” Robinson the cartoon character reliving his heyday in bingo halls for almost no money, or is he the middle-aged man who abandoned his daughter and hates his boss at his part-time job at the grocery store?

Andre the Giant stands alone among wrestlers, though, and that makes Brown’s book perhaps the most powerful piece of work about the fake sport. As Brown shows, there was no gimmick for Andre the Giant. Unlike Hulk Hogan, Ric Flair, the Rock or Chris Jericho, wrestlers whose characters were all closely modeled on their real personalities, there was no separation between Andre and his character. He could never forget that he was literally a giant, constantly reminded as he was by the stares and gasps of others and by the constant pain that wracked his ever-expanding body. It’s easy to say he had a giant’s appetite, regularly drinking in one night enough liquor to send a regular mortal to the hospital, but his dependence on alcohol speaks to something far more damaged than simple gluttony. He was a man in pain, physical and emotional, and both the theater of wrestling and the joys of booze helped him deal with that discomfort.

Brown captures that pain, along with the playful side of Andre’s personality that endeared him to wrestling fans and anyone who’s seen the movie “The Princess Bride,” and he does it through sources that would not have been available before kayfabe collapsed in the late '90s. Brown based the book largely on shoot interviews and wrestler biographies, material that would not exist under kayfabe. This makes “Andre the Giant: Life and Legend” as unique as its subject. Without the trends within the wrestling industry that make this book so powerful, Brown wouldn’t even have been able to create it. Brown proves that, unlike almost every other wrestler, there was no gap between Andre the Giant’s life and his legend.