The privilege of being "invisible": As a brown Muslim woman, my visibility comes with my Otherness

When I think of white privilege, I think of the ability to be seen as more than a tired symbol in a culture war 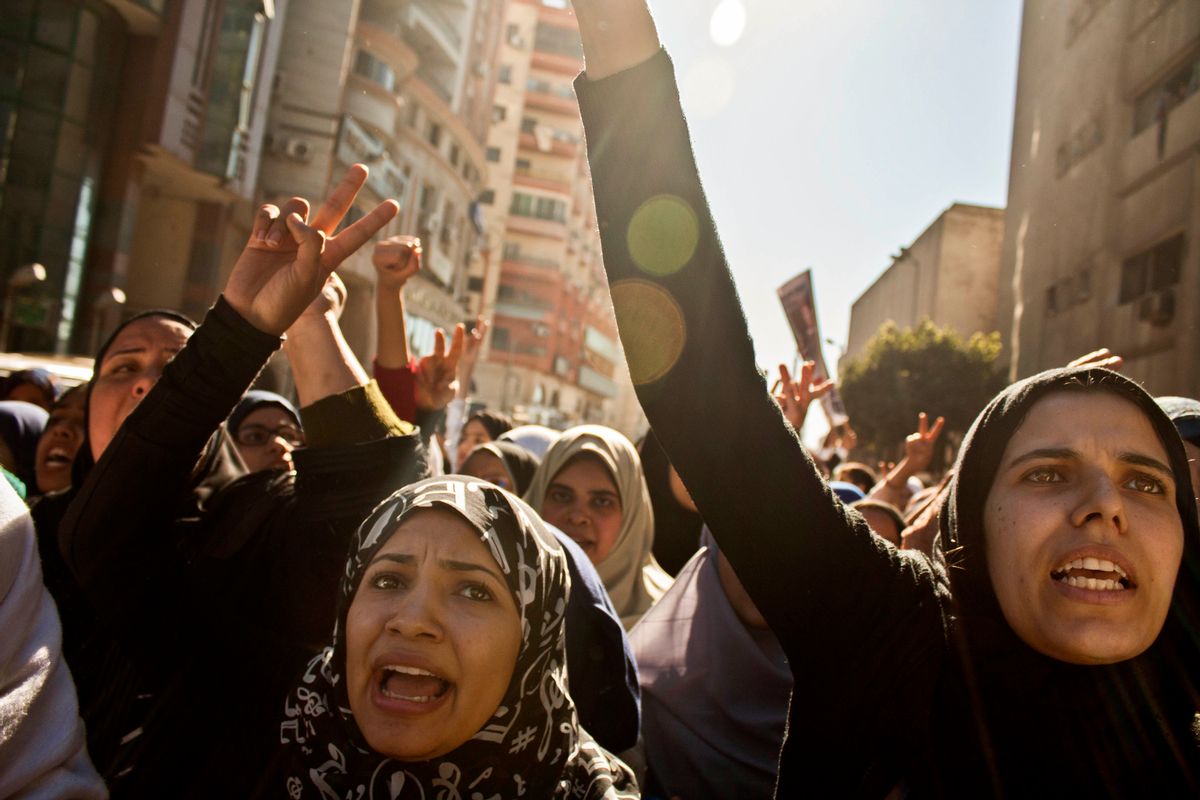 I was kneeling in an East London mosque that evening. A woman with black robes flowing around her appeared and sank to the ground next to me with a whisper. I knew those robes. They billowed around the heels of women in Qatar, where I lived, and left a gentle trail of Chanel No. 5 behind them. The robes were familiar; it was the face that surprised me.

She was clear-eyed, without makeup or illusions. She called me “sister” with the frantic zeal of a new convert.

“Sister,” she told me, “sister, your clothing is not enough.” I looked at her, an embryonic Muslim of color, a Miranda just emerging into a brave new world. I was covered -- a scarf on my head, jeans, a jacket. I was covered and yet it was not the correct cover.

“Sister,” the woman told me, squeezing my hand with compassion, “sister, I used to be whistled at, harassed, abused. Sister, these robes, they saved me. They made me invisible. Sister, you should wear them, too, they are a new life.”

Smiling at her with gentleness, I rose and said the standard peaceful Muslim goodbye. It never occurred to me to destroy her fragile belief.

“Sister,” I wanted to tell her, “you will never be invisible.”

I did not explain to her that the demons of Orientalism, neo-colonialism and fundamentalism would find her despite the robes -- maybe because of them. I walked away because I could see she had just learned to hide from society. It was not my place to reveal her.

I did not tell her that as a brown Muslim woman, my visibility comes with my Otherness. I did not share my weariness although I wanted to tell her: Even if I quit faith and hid, both East and West would always question me. Why were my people so barbaric? Why did I not get married and settle down like a good girl? Had my family tried to arrange my marriage? Didn’t I know that my husband was in charge of all decisions? Why were all Muslim men chauvinistic pigs?

Everyone demands my story but no one believes it. My cover is made of caramel skin and a double-x chromosome. This is what everyone judges; there is no other cover to hide behind.

We are banned books, coveted and hated, defiled or held up as symbols of grand ideals that we may or may not represent. It means I do not know enough to speak for myself. It means that my content, my beliefs, for so many people on both sides, are obviously imbalanced and in need of some editing. It means that no one wants to hear my story but everyone wants to have an opinion about me. It means I was born in the middle of a battle that I had not chosen.

I wanted to tell her that some feminists focus only on the black robes and would insist on stripping her to jeans and a T-shirt. “Don’t hide yourself,” they would say. They attempt to liberate us from our own, like the French laws insisting that the covers are a sign of oppression. Women who are free, they say, are also Western. They would force this identity on us and ignore our protests. The problem with this, of course, is that we are not white.

“Western” is not a term you could apply to me unless I went back and rewrote my history. They could remove a scarf, I could do it myself, but I would still be this color and from this place. How can I ignore the burned pages and missing chapters in my “Heritage” section? The footsteps of my grandparents who walked across an artificial border 70 years ago? The stubborn resilience of my people (yes, I still consider them my people) who have cobbled together a megacity even in the face of Taliban explosives?

Even if I identified as American, which I usually do, everyone will still ask me, “Where are you from?” Should I apologize for the confusion, for my brown skin, American accent and ambiguous first name? Should I apologize for my Pakistan-Muslim-feminist views? Shall I whitewash my skin or become invisible like my sister in magical robes?

The robes, I wanted to tell my sister, worked in certain places. They would make her invisible to some. Others would see red and, like bulls, rip them from her. How could I explain that all the pulling only takes away her choice? Our choice? That reform in places like Saudi Arabia and Iran needs to come from within us? That insisting on folding the post-colonial world into a Western covers smothers our torn histories and our screams? That my own, the Moroccans and the Indonesians and the Pakistanis (they are all “mine”), feel that the ground splits and tears under them as they struggle to find footing in a world where white men are in charge? That if they are not in charge, they are propping up tyrants or dropping drones?

How can I explain that the anger reverberates in both of my ears because I dangle one foot in both worlds but am exiled from both? My mediation often falls on deaf ears as I struggle to explain my other family (my American tribe) who took me in when my own wouldn’t have me. There is a chapter in me marked “Loyalties” where I discuss these complexities, but no one reads it.

Amartya Sen wrote, “Our freedom to assert our personal identities can sometimes be extraordinarily limited in the eyes of others, no matter how we see ourselves.” I carry stories in me: white-robed Bangladesh pilgrims flying to Mecca, my best friend’s blue-eyed daughter, the Afghan refugees I drank tea with in Karachi, Tanzanian schoolchildren who called me “white,” an old friend assassinated during a school assembly, African elephants, my mother’s prayer rug, Argentine tea, Oxford, Big Ben, my baby brother’s love of Kraft cheese, Qatari courtesy, Apple Bottom jeans in a Houston high school, a beautiful convert in an East London mosque. Perhaps if others bothered to open the book, they might read the story and understand the daughter, the sister, the lover, the teacher. The woman.

Perhaps they might see, on either side, in either world, past the presumptions into the world I carry and all of my claimed identities. Perhaps I could negotiate peace because I am on intimate terms with both parties in this artificial war. It is easier, however, to fold me into a neat package and label me “Exotic.”

Back in the mosque, I thought about the girl sitting next to me, holding my hands, telling me I needed a different cover. Whether we are naked or covered we are always folded between the illusions and perceptions of others, unable to express ourselves because even other women only see us as colored dolls -- empty inside. Stifled and bound, our pages, our voices, are hidden or judged by those around us who possess far more privilege than we do.

I did not tell the lovely new convert, seeing her obvious hurt at the way she had been treated by men, that the robes were not magic that would help her disappear. She had ripped her pages out and put them in a new cover but people would still see her, still judge her, still refuse to read her story. Men would still hunger after her symbolic sexuality. I wanted to tell her that the world, the whole world, would still see her as a thing, not a person.  I wanted to tell her that as far as the world was concerned, everything but her outside was invisible, anyway. In my head I told her there were ways to fight this beyond trying to disappear. She could speak and deafen the world with her voice.

The truth is, we are not the books. We are not symbols or tokens or empty covers. We are the teachers. We can’t be shoved into obscurity or banned because we are the voices telling our own stories. We can’t be muffled in the pages of history anymore or classified into the token Other that represents your inclusion. We are not made invisible or burned through willful ignorance.

In my head I told her she could say this: I am not a book; it should not matter if I am covered in black or in nothing. I have found my voice and I will speak, not beg you to pay attention. I am more powerful than anyone’s attempt to hide me or classify me or ignore me.

I am not an object. I am a voice telling a story.

Maria Khwaja is an Istanbul-based teacher, feminist and devout Muslim. She writes mainly for the Fair Observer on educational issues in developing countries.  You cal follow her on Twitter @mariakhwaja.