"Godzilla" is the best action movie since "Jaws" 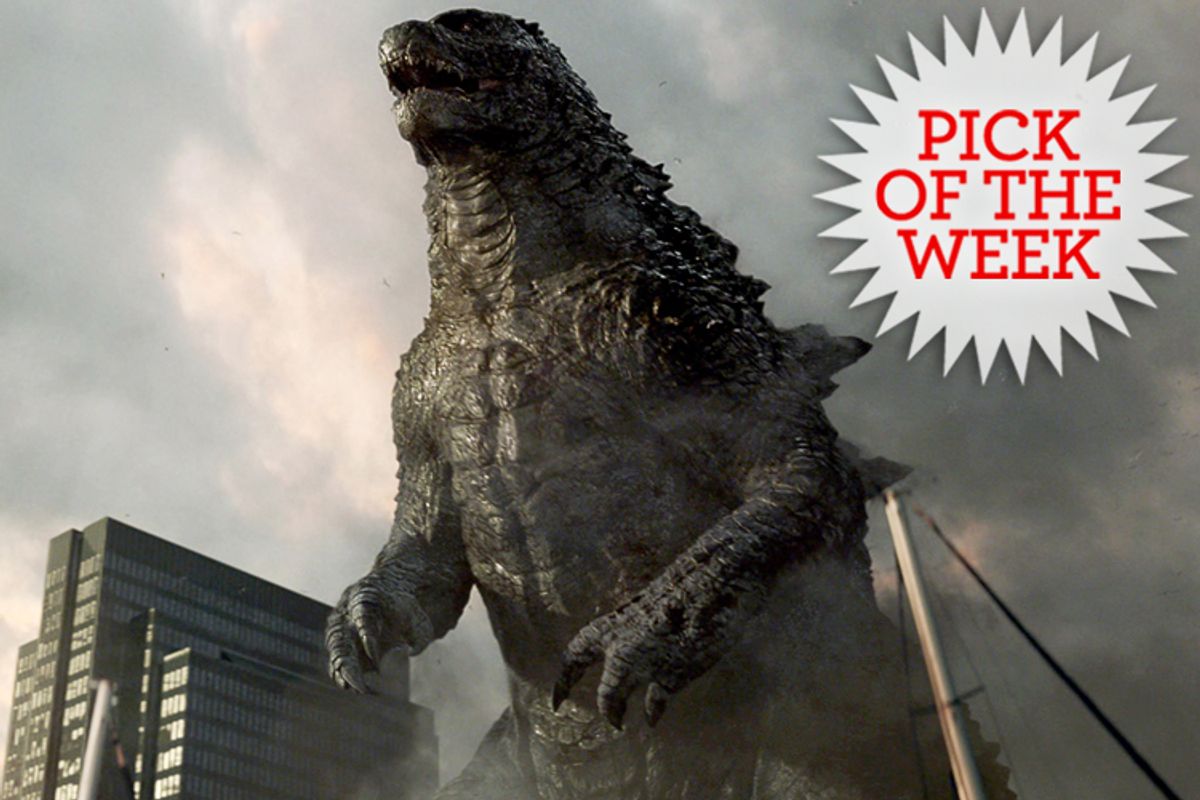 It’s a relief to encounter a big popcorn-spectacle movie that people are actually excited about – as opposed to, say, the “Captain America” and “Amazing Spider-Man” sequels, where the public attitude was more like polite compliance with a mandatory directive. Those movies came with built-in excuses, like our friendly president’s national-security state, or like the fact that it’s the middle of May and those of us in the eastern two-thirds of the country are still dealing with PTSD from that horrible winter, and here we are two weeks into “summer movie” season. We can’t do anything about it! It’s the way things are! Better make the best of it! Those people in Hollywood (and Washington, and Manhattan) totally mean well! They just want us to have fun and feel safe and not hurt our brains!

No such excuses are needed for Gareth Edwards’ exhilarating “Godzilla,” which arrives as more than a relief. It’s a bracing tonic for the bored palate of the mainstream moviegoer, and one of the most intriguing big-budget breakthrough films since Steven Spielberg made “Jaws.” (Edwards’ only previous feature is the 2010 low-budget indie “Monsters.”) This is a movie of tremendous visual daring, magnificent special-effects work and surprising moral gravity. Its magic lies in the big things – like, the really big things, which take their time showing up but are totally worth it – and the small ones. Those include David Strathairn’s delicate supporting performance as a U.S. Navy admiral tasked with nuking a trio of giant monsters, bringing a note of seriousness and sobriety to what would be a meathead warmonger role in any other movie. When a Japanese scientist shows Strathairn his father’s pocket watch, stopped dead at 8:15 on the morning of Aug. 6, 1945, the admiral is genuinely shaken.

That’s just one small indicator of the ways that Edwards, screenwriter Max Borenstein and story author Dave Callaham have created a convincing world and treated its implications seriously. It’s a world threatened by reawakened prehistoric beasties, to whom our existence is irrelevant, but it never feels like a fantasy, a comic book or a franchise-starter. Instead of the ultra-fast, migraine-meets-ADHD editing that reduces most big action films to total incoherence, Edwards, cinematographer Seamus McGarvey and their immense production team have designed atmospheric and exciting action sequences you can actually understand, and that support the movie’s meaning rather than replacing it. Believe me, there’s no shortage of grand spectacle, from a train derailment in the Sierra Nevada mountains to a monster-inflicted tsunami on Waikiki Beach to the near-total destruction of Las Vegas. But you always feel the suffering and destruction, which some viewers may not welcome; this isn’t empty, adolescent apocalypse-porn in the Michael Bay style.

There are several breathtaking scenes of visual poetry in “Godzilla” that I can’t wait to see again, perhaps none better than when a team of paratroopers, streaming flares attached to their ankles, drops toward San Francisco from 30,000 feet, set to the haunting buzz of Györgi Ligeti’s “Requiem.” It made me think of the demon likened to Hephaestus in “Paradise Lost,” who falls from Heaven for an entire day, “from morn to noon … from noon to dewy eve”: From the frozen mists of the stratosphere the soldiers fall into sunlight and then into clouds again, and then out of clouds into a gray city where, shockingly, a giant reptile is locked in mortal combat with a giant insect. Not only is it not ridiculous, it’s amazing, and the comparison to epic poetry isn’t as dopey as it sounds. Serizawa, the Japanese scientist played by Ken Watanabe (his name is a nod to Ishiro Honda’s original 1954 “Godzilla”) has already observed that, compared to us, Godzilla is essentially a god.

We’re already hearing complaints about the limited scale of human drama on offer in “Godzilla,” and it’s true that buff young naval officer Ford Brody (Aaron Taylor-Johnson) and his E.R. nurse wife Elle (Elizabeth Olsen) make for a highly generic version of separated-couple-in-disaster-film. I’m not going all the way to claiming that this is a deliberate postmodern strategy, but this just doesn’t seem like an important complaint. Edwards is battling against the established clichés of the big action movie in every frame of “Godzilla,” and he uses the bland, brave blankness of Ford and Elle for a purpose. They’re only the heroes of the film in the sense that we keep returning to their struggle to survive. Neither of them brings down a giant monster with an improvised slingshot while mouthing nonstop wisecracks; neither of them demonstrates that the power of Mom and Dad’s love is superior to the power of a newly hatched giant energy-sucking mantis-thingummy from beyond time. (I guess those are spoilers, and I’m deeply sorry.)

Essentially the characters, Ford and Elle included, are there to provide back story and exposition, and to lend a human scale – an infinitesimal human scale – to a story that suggests that our entire planetary history of love affairs and great novels and dance parties is just a meaningless squiggle, liable to be wiped off the dry-erase board at almost any moment. There’s only one real hero in “Godzilla,” and it’s the guy who can swim under an aircraft carrier in the open Pacific with the ease of a gator going under your canoe. As Dr. Serizawa explains at one point, Big G is the all-time alpha predator of the prehistoric world. Nuclear testing of the ‘50s roused him from the ocean’s depths, and the world’s governments have kept him a secret until now, more or less. When Godzilla finally rises to his magnificent height, a dripping, brutal, beautiful monument to the unmastered essence of nature, and utters that ear-splitting roar, the preview audience I saw this with lost 100 percent of its shit, and no wonder. Elvis never had an entrance that good.

Long before we get there, Edwards has crafted a tense, dense drama that borrows extensively from real history and real disasters, natural and otherwise: the H-bomb tests on Bikini Atoll, the Fukushima nuclear disaster, the South Asian tsunami. This “Godzilla” reboot has a slight Neil Gaiman or Philip K. Dick flavor, in that it presents an alternate universe strongly resembling our own but subtly distinct. I won’t say much about the plot because it features several important early twists, but Ford Brody, Taylor-Johnson’s character, is the son of a pair of nuclear scientists, played by Bryan Cranston and Juliette Binoche, who were involved in a mysterious 1999 nuclear meltdown that contaminated large sections of Tokyo. Those areas remain fenced off and quarantined today, and when Ford gets back to San Francisco from an overseas tour of duty he gets an unwelcome phone call from Japan: His dad, now an embittered old crank in a tiny apartment, has been arrested for trying to sneak back into the quarantine zone. Apparently it isn’t the first time.

Given the title of the movie, and given that we’ve also seen Serizawa and his colleague Vivienne Graham (Sally Hawkins) make an alarming subterranean paleontological discovery in the Philippines, we already kind of know that Cranston’s crazy theories about what went wrong in ’99 aren’t that crazy. He convinces Ford to make one last trip into the quarantine zone to explore the family home they abandoned 15 years ago, which is now overgrown with tropical vegetation and inhabited by unusually large cockroaches. This leads to the discovery of what exactly Serizawa, Vivienne and the U.S. military have been hiding in the old nuclear plant: It isn’t good news for the human race, their belief that they have it contained is incorrect and it wants to bust loose and find a mate. Oh, and it isn’t Godzilla.

He’ll be along in due course, and given the unexpected powers and appetites of this newly hatched nemesis – after it encounters a Russian nuclear submarine, the sub winds up in the Oahu rain forest – Godzilla, as little as he gives a damn about us, may be our last hope. Any number of monster movies preach karmic sermons about war or prejudice or environmental destruction or whatever; the hidden message in the genre is nearly always that we had it coming. But “Godzilla” never defaults to the myth of the heroic individual, in which one man stands outside the mass of human mediocrity, and can bring down any opponent with pluck, ingenuity and a few well-timed zingers. Taylor-Johnson’s character is brave and resourceful beyond any ordinary measure, but the movie repeatedly makes clear that he has no shot at standing alone against these eldritch monstrosities. This is one of the few Hollywood films where a character says he’s prepared to face death, and you can feel how big a thing that really is.

According to the pop psychology that governs Hollywood blockbusters, the teenage male audience requires an impervious, superhuman ego-boosting hero, as symbolic salve for its immense insecurities. I’m interested to see how this movie will play beyond its undoubtedly huge first weekend, since it does not offer that variety of reassurance, but another kind that’s a bit more grown-up and harder to swallow: As big as we think we are, nature is ultimately a lot bigger, and the consequences of our actions are likely to be things we never expected. If it takes getting stomped by a ginormous lizard to drive that lesson home, at least it’s one hell of a lizard.