They're lying about Ukraine, again: Primitive prejudice, stupidity and the reflexive compliance of the New York Times 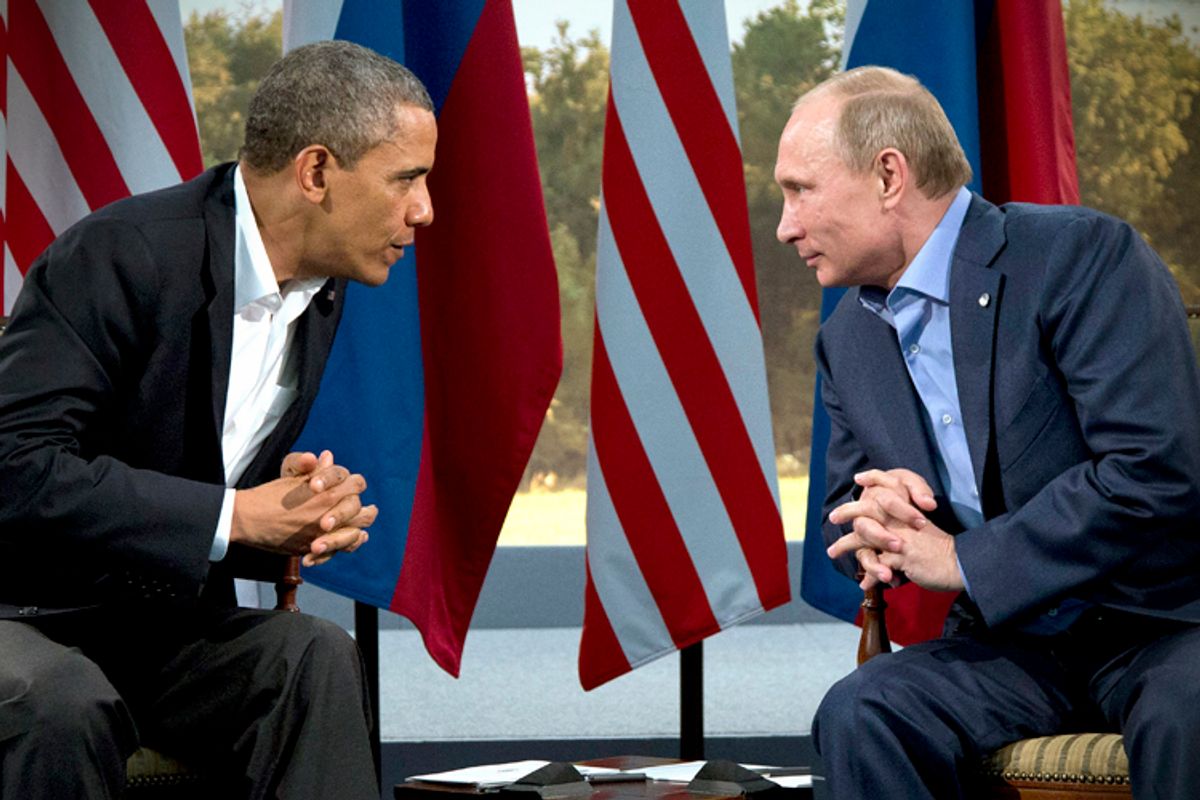 However Ukrainians settle their drastic differences — and they can, providing all sides find the will to do so — a large and welcome consequence of this crisis falls to Americans. This is summed up in a single word. Ukraine gives us the gift of revelation.

We Americans are destined to discover who we are in this century, as opposed to who we tell ourselves and others we are. The great dodge of the American century, chiseled in granite with Woodrow Wilson’s famous line, “The world must be made safe for democracy,” will lose its power to propel. This was a fairly easy call long before the events of the past six months on Russia’s southwest border. In Ukraine we start to see how this will occur, what forms it may take, and what we will find when we look.

American-sponsored coups have flopped before, goodness knows. The list is long. But this failure takes us further than ever before up the creek that smells, in my view.

At writing, the provisional government in Kiev has reluctantly opened talks on decentralizing the Ukrainian political structure. Hardly was this in Washington’s plan, but the Obama administration will nonetheless have considerable influence on the outcome in Ukraine as it backs out the gate it crashed, as I am convinced it will before this is over.

This is not my point. My concern is with what the Ukraine crisis has unexpectedly exposed: the bankruptcy of the story, the hollowness of the pose. To be revealed is the great collection of presuppositions, prejudices, presumptions, myths, representations and ideological beliefs that were the ink with which the American century narrative was written.

Good for Ukrainians, all of them in the end, that Washington’s effort to install a crew of neoliberal puppets in Kiev has been disrupted. Good for everyone, including Americans, that the Ukraine crisis exposes so many of the defects in the prevalent American worldview. I may judge the moment too optimistically, but there seems no going back from this.

I have asserted previously in this space that Moscow’s account of the Ukraine crisis is more coherent than Washington’s. Each time, the argument provokes a certain shock-horror syndrome among many readers — and, of course, numerous accusations that the writer of such things must be a shill for the Russians, an FSB agent, a Putin groupie, and so on.

To be honest, I greatly enjoy advancing this view. First of all because it is true, and second because so many of my fellow Americans choke on it. The default position, name-calling, is a boring but common ruse in the American conversation, always an indication that there is no comeback other than to invoke beliefs as opposed to thoughts.

The question raised is what lies behind this. The core idea is that if the Russians say something or think it, it cannot be right and no one’s thinking can credibly coincide with theirs. I see something important to learn here; something needing to be revealed.

I am always one for history, so let us begin there.

The first thing to consider is how “the West” came to be. The idea of the West as opposed to “the East” is as old as Herodotus, maybe older. But the West as a political notion is much younger. It dates to the 1840s. Peter the Great had started modernizing Russia and building an empire — in imitation of the Europeans — in the early 18th century. By the mid-19th century it was evident that the czars had made Russia a contending power.

Ponder this observation: “There are only two peoples now. Russia is still barbarous, but it is great. The other young nation is America. The future is there between these two great worlds. Someday they will collide, and then we shall see struggles of which the past can give no idea.”

That is a French historian and critic named Charles Augustin Sainte–Beuve. He wrote the passage in 1847 — a prescient call, we have to say. Within a few years, French and German thinkers wanted Europe and the U.S. to make common cause by way of some form of alliance against the rising Russians. Out of this came the political West, and it is a straight line all the way up to NATO.

The West, then, evolved from a cultural distinction to a function — an operational entity, a mechanism — and was a reaction from the start. Westerners accustomed to civilizational supremacy were fearful of the arriving East.

The scholars call what emerged from this current in 19th century thinking a national character argument. You find these in lots of places, and in every case they are to be countered without mercy, for they are nothing but ignorant prejudice. Germany after the war got this treatment: The Germans did this because they are German and this is what Germans do. The Chinese deploy this as we speak: The Japanese did what they did to us in the war because they are Japanese.

Essentialism substitutes for politics and history: This is the trick of the national character crowd. It is excellent for marshaling popular emotion but altogether an indecent exercise. The French as “cheese-eating surrender monkeys.” Now you know what I think of people who signed on for this one during the Bush II years.

The Russians came in for a national character argument as Western opinion evolved in the 19th century and then the 20th. Russia was quintessentially of the East, and the East was cast as Edward Said described in "Orientalism": autocratic, irrational, dark of motive, and so on more or less infinitely.

You can anticipate the next thought easily enough. Exactly 100 years before time, Sainte-Beuve described the Cold War. There was a practice run after the Bolshevik Revolution in 1917, and then the real thing as of 1947. (Amazing symmetry in these dates.) The Cold War was many things, but before it was anything else it was the consequence of intellectual habits formed a century earlier.

Plainly enough for anyone who lived it and suffered all the propaganda and rhetoric and appalling scholarship, the Cold War rested on a national character argument articulated with little inhibition — and no shame. Nothing Soviet was of any worth. All Soviet citizens suffered all the time. No Soviet market ever had enough on the shelves. Anything a Soviet apparatchik said was the very opposite of true. And never to be forgotten (my little fixation), Soviet officials always wore “ill-fitting suits.” Had to be.

The Cold War ended in 1991, but only because the Soviet Union collapsed. The longer war, of which the Cold War decades were but an interim, went on. Russia was still Russia and Russia was still “the East” and all this had come to mean. The West proposed a partnership in the 1990s. As we can see now more plainly, this was impossible from the first in that the West would continue to insist on a divided world, West and East, as soon as it became clear “partnership” would have to mean more than a capitulation of all history and culture on the Russians’ part.

This is why I take revelation as my topic. Most of us think we look at the Ukraine crisis, listen to our leaders, read our newspapers, and draw informed conclusions. Missed altogether is that we are merely taking our place in the long story. There is nothing in orthodox thinking, or in most people’s views, that departs from the burdensome inheritance. (And part of the inheritance is not understanding that it is inherited and is a burden.)

All is in place. The West is the light side of the moon, Russia the dark. Russia has aggressed in Ukraine: We have no evidence but it must have, as this is what Russians do. If Putin says it, it has to be wrong: Russian autocrats are never right or truthful.

No Ukrainian could possibly want to live within the dense weave of his or her historic ties with Russia. This last is an assault on the American sensibility. The American inheritance makes this information indigestible, foreign food. So the Russians must be pulling the strings, manipulating millions of minds as they always do.

Last week, Vladimir Putin publicly urged those in revolt against the provisional government in Kiev to step back from their planned referendums on their future arrangements with Kiev. How did the New York Times report this? “It remains unclear what Mr. Putin’s motives were for suggesting the delay,” its correspondent in eastern Ukraine told us in Sunday’s editions.

The baggage of primitive prejudice brings us to stupidity. It is the only way to explain this sentence. It could not be that Putin urged a delay because he thought it best and wanted one. Never, with a Russian, do you get what you see. Never is what is said meant.

The American orthodoxy on the Ukraine question is suffused with this kind of thing. It is irrationality masquerading as high-end rationality. And irrational minds are not equipped to judge.

This is what Ukraine reveals for us. We have a long tradition to overcome. As I have argued elsewhere, among our 21st century tasks is to cross divides, to remake our relations with “the Other” in all manifestations, to advance beyond old conceptions of “the West” and “the East,” to take a divided world as being of the past but not the future.

With the Ukraine crisis as our point of revelation, we are not very far along, are we? In essence Washington has reverted to type, failing to register that this will no longer do. Simply on a practical plane, do American policy cliques seriously think Europe and the rest of the world will take more than a brief, altogether expedient interest in any prolonged attempt to isolate Russia? Out of the question.

Washington’s refusal to acknowledge its role in the Ukraine crisis grows more remarkable by the day. A great game of pretend persists, in the face of pretty good dissemination of many facts. In keeping with the retro character of the strategy, Washington relies on 1950s-era credulousness to sell its story to Americans. But this willing suspension of disbelief common during the Cold War is no longer so reliable. We have the history this time, and the evidence of the history.

It is not encouraging, this stubborn adherence to the plainly untrue. I read it as Washington’s way of deflecting all that Ukraine shows us about ourselves. I also read it as evidence of a profound lack of imagination within the American leadership. No capacity among them to move on from what once was.

It is a truism that self-discovery is never easily achieved. But in this case there is no choice. History’s wheel will force this upon us Americans. We will have to come to terms with who we are and what we do if we are not to fall behind, if we are to avoid other Ukraines. It is doubtful other nations will have the patience or the stomachs for other Ukraines. This one has cost us, in my view, and more of them will cost us more.