"I hate the word 'quirky'": Zoe Kazan on being an indie starlet 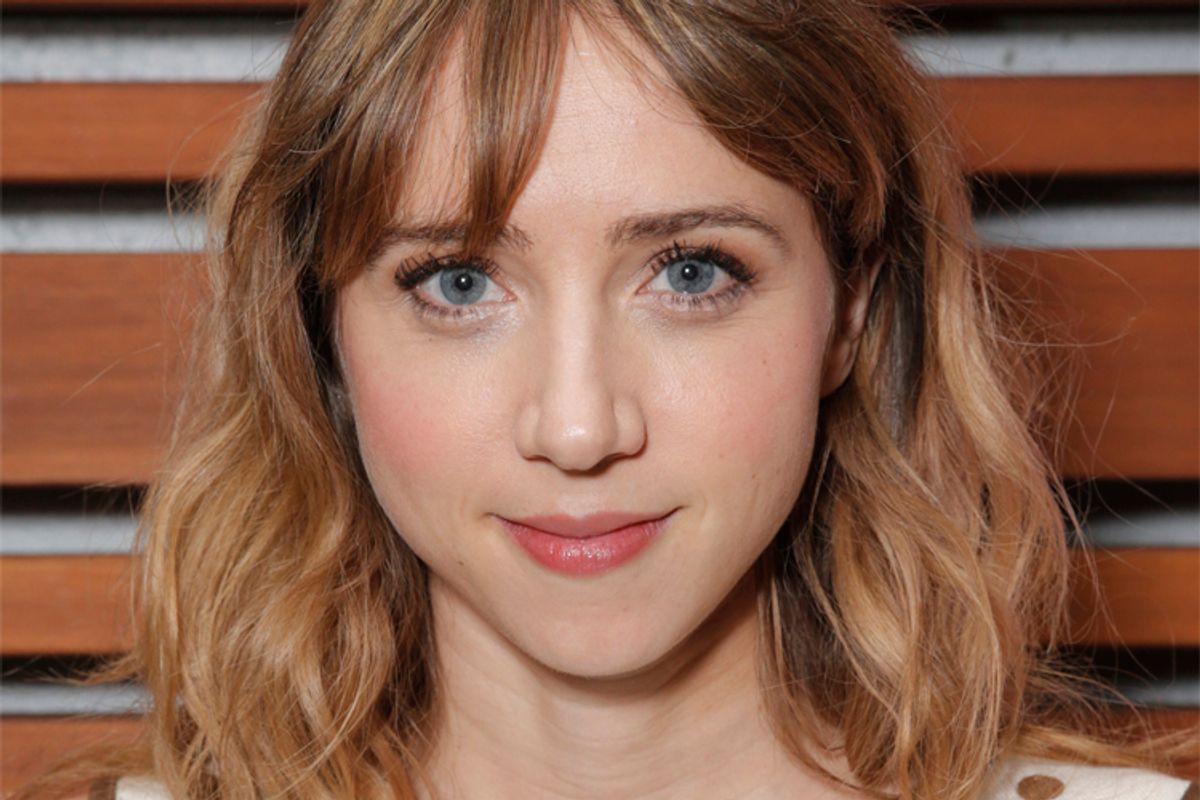 Indie star Zoe Kazan excels at playing fragile characters. She made a striking impression in the title role in “The Exploding Girl,” and has since turned in some fascinating performances — as twins in “The Pretty One,” or as the title character in “Ruby Sparks,” a film she also wrote. In “In Your Eyes” (now available on demand), the granddaughter of Elia Kazan stars as Rebecca, a woman in New Hampshire who has an intimate connection with Dylan (Michael Stahl-David), a man she has never met, but with whom she can communicate through thoughts, talking and touching.

Written by Joss Whelan, this nimble, charming romance is about seeing the world through someone else’s eyes. Kazan fully inhabits her role — dancing with Dylan to the same song, or helping him, á la Cyrano, on a date, even when suffering from “seizures” during her husband Phillip’s (Mark Feuerstein) important business dinners.

“In Your Eyes” feels like two monologues that fit seamlessly together.

Aren’t you a big action star, used to doing scenes with a green screen?

Yeah, this is your little indie to establish your cred…

Exactly! I wish I was like Bruce Willis. That would be awesome. I’d have two facial expressions and be fighting so kick-ass. … But “In Your Eyes” is a conventional love story. If you take away the fact that people aren’t in the same space, it has an arc that’s recognizable, of people coming into themselves and out of their shells, and rising through love. I think that’s one of the reason’s Joss’s work is so powerful. He takes tropes and turns them inside out so you can see their bones. He also employs tropes in order to tell more “out there” kinds of stories, like this one.

Is there anyone you would want to connect to, past or present, if you had Rebecca’s power?

There are plenty of brains I’d want to pick. Salinger, or Sylvia Plath, or Fitzgerald, Chekhov, Tolstoy, Richard Brautigan. The list goes on…[Haruki] Murakami, Melville, Renoir. Mostly writers, I guess, because I think the visual cortex is less easily explained. Those writers are writers that I have loved for so long.

Would you want that power?

It’s not the superpower I would pick. I’d rather be invisible, for sure. Being able to go into people’s homes and see how they live and be a fly on the wall and watch people — that sounds more interesting than being able to hear their thoughts.

Is that why you are an actress?

That’s one of my favorite parts of my job.

And why are you a writer?

I love language. I’m very committed to how people communicate and word choice, and stuff like that — but on a completely visceral level. My pleasure centers light up through language and words.

Do you have a favorite word?

Well…my favorite word used to be twilight, but it’s been completely, devastatingly ruined. That was absolutely my favorite word. I thought it was the most beautiful word in the English language. It’s been totally ruined. [Shakes head]. I overused ostensibly for a long time.

What about the word “quirky,” so overused to describe “precious” indie films and indie film actors?

I hate that term. I think its meaning has been warped by the culture to mean a very specific subset of traits, whereas it used to mean unique. I think it’s making small and diminutive — as in diminishing — someone’s power, or individuality. I think I’m an individual. That’s what most artists are.

There are several films — “And Now My Love,” “Sidewalls,” “Made in Heaven” — that have that same structure of the two strangers destined to meet…

Joss wrote this pre-"Sleepless [in Seattle"], and he tabled this when that movie came out. I don’t think it’s that similar, because the two leads are separated throughout.

"Sleepless in Seattle" was so important to me growing up. I loved Tom Hanks so much. "Big" was my absolute favorite movie. I loved "A League of Their Own." As a kid, growing up in the early ’90s, I was totally a Tom Hanks fan. He’s so extraordinary. I think he’s just a nice person. I would love to work with him. I haven’t.

The dance and mirror scenes between Rebecca and Dylan are great.

Do you remember when you were a teenager and you would talk on the phone for hours? That’s what I was thinking about. In high school, I would talk to my boyfriend for hours and I could say things to him that I could never say in person. There was a feeling of being closer than flesh, and that’s how I thought about this connection. [Dylan] is literally with her, inside her head.

I liked shooting that first mirror scene, because it was fun to play, imagining things that aren’t possible — looking in the mirror and feeling like someone else is looking at you. The dancing is terrible. I hated doing that. I was so embarrassed. I love to dance, but I love to dance. I love to put on Robyn, or the Mamas and the Papas, and fucking rock out in my house or at a wedding. But that kind of slow-dance dancing I did in the movie, I don’t know how to do that.

The sex scene between Rebecca and her husband Phillip is supposed to suggest love, but the “touching” scene, where Dylan and Rebecca just feel each other, is much more intimate. How did you approach filming these two different scenes?

Brin [Hill, the director] did a good job making us feel comfortable and exposed — not physically, but sensually. With the scene with my husband, I said to Mark [Feuerstein] that Phillip dictates what we do sexually. I do what he likes. It’s less about her own pleasure, but about her giving him pleasure, especially in that scene where he’s really insecure and needs to feel loved and she needs to make him feel loved and reconnect with him. I said to Mark, “I’ll follow your lead.” On the “touching” scene, in some ways you can be very honest with yourself. When you are touching another person as an actor, there’s a kind of double-ness to the touch, because you’re not really touching them to give them pleasure, you are trying to stimulate pleasure on their body for the camera.

Even kissing someone in a film feels…. Paul [Dano, her boyfriend] and I met doing a play together. And we had to kiss every night in the play, but we didn’t kiss in real life for a long time after that, and it was totally different. When you are touching yourself, you can feel your skin, so it was a wonderful, imaginative exercise, to imagine touching your own skin as if it were the first time. It was about self-love and she’s very self-deprecating, so taking pleasure in her own body was very interesting. I couldn’t watch that scene.

Do you feel yourself constrained to playing “fragile” characters — “The Exploding Girl,” “Pretty Ones,” “Ruby Sparks”…

If I was a casting director, and I was going to cast a really tough girl who ran with the boys and drove motorcycles, I probably wouldn’t cast me. But there is a fair amount of typecasting that goes on. In the movies, you can get to the right person most of the time. I want to express myself as an actress, but I am attracted to vulnerability. I am interested in it. When I’m reading a book, or meeting someone or watching a movie, it’s the soft underbelly that’s more interesting to me than the hard shell.