I live in fear of deportation: My life as an undocumented worker

I was 10 when we crossed the border without papers. I built a family here -- but it could all be taken away 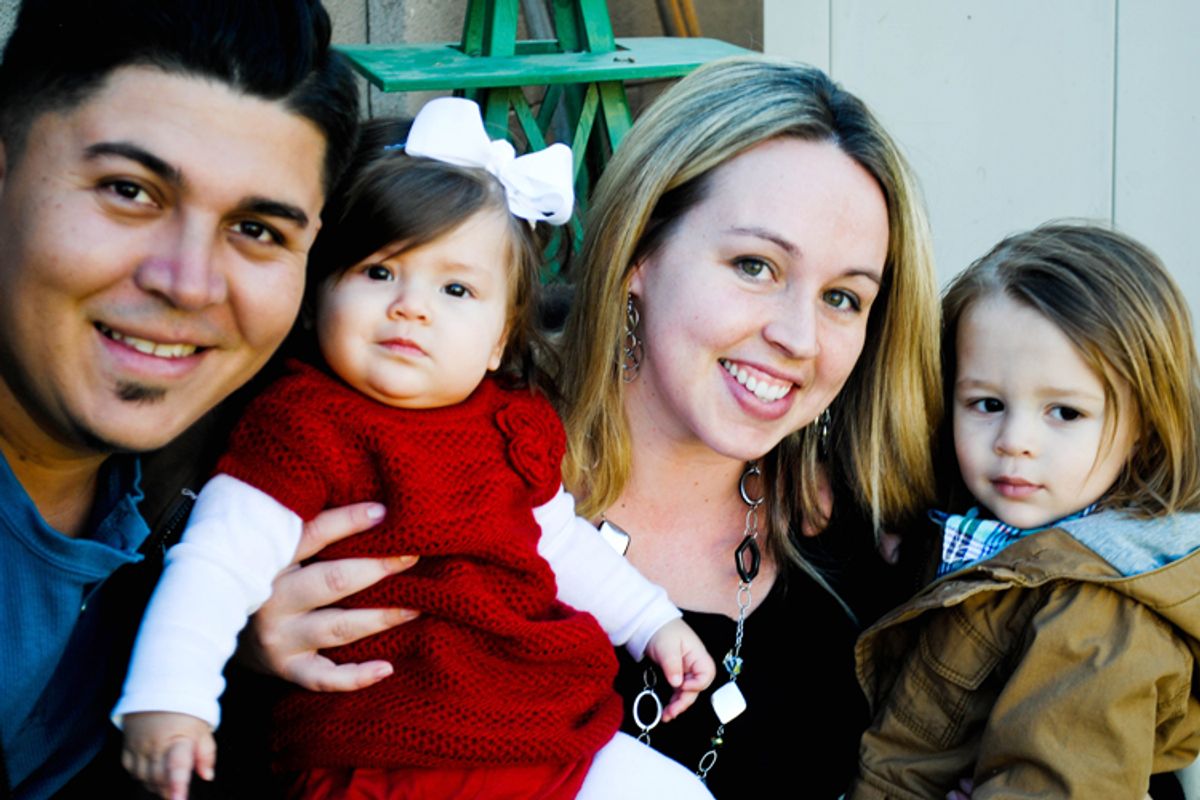 A photo of Hugo Carrasco, his wife Leslie and their two children.
--

I was at home on my day off from the restaurant when I heard Sheriff Joe Arpaio was arresting undocumented workers. Two armed men with badges showed up on my front porch. When they asked for Hugo, I slammed the door and tried to think of an escape, but I didn’t get far. My neighborhood was full of armed officers and flashing police lights. All my neighbors were out on the street.

I called my wife, Leslie, who was four months pregnant with our first child. She told me not to open the door again, and she would come home right away. I felt so little and helpless inside my house, running from room to room, looking out the window.

When Leslie arrived, the officers stopped her; they wouldn’t let her in our house and said they would enter with force if she opened the door. She was crying, and the officers were screaming. I came out with my hands up.

That was the day I was arrested, and charged with identity theft and using falsified documents to work. And that was the day my world ended. Now, I face deportation and permanent separation from my wife and two children.

I was born in a small farming town in Mexico and came to the United States without papers at 10 years old. The lingo for people like me is a “Dreamer” (a reference to the Development, Relief, and Education for Alien Minors, or Dream, Act). I don’t remember much about crossing over. Maybe I’ve tried to forget about it. But I remember a man driving our family through the desert and lying on the car’s floorboard with my siblings so we wouldn’t be seen. When we reached the border, we walked across and found ourselves in Douglas, Arizona.

My father had been in Arizona several months, doing construction, so what I mostly remember about that day is how excited I was to see my dad again. I had missed him so much. We celebrated at his apartment in Phoenix. Our family was together again, and our new life had begun.

I knew we were undocumented, but I didn’t yet understand what it meant. I was still in fifth grade. It wasn’t until high school that I began to really see how I was different. Like when my friends got their driver's licenses, and I couldn’t. Or when I tried to join the military, but was told I wouldn’t be able to. That’s when I started to realize what life without immigration papers was going to be like.

I started to feel pretty bad about myself, too, like I wasn’t good enough, because I wasn’t like the other kids. I couldn’t ask a girl out on a date, because I couldn’t drive. What if she wanted to see an R-rated movie, and I didn’t have the proper ID to go?

By then, Sheriff Joe had started his infamous raids and set up checkpoints around town, completely changing life for my family and our community in Phoenix. The sheriff is known for racial profiling, pulling anyone over who “appears” to be here unlawfully; he’s known for his immigration sweeps, rounding up hundreds of people and handing them over to Immigration and Customs Enforcement (ICE) for deportation. He’s the one who arrested a 6-year-old in one of his immigration sweeps and forced 220 immigration detainees in stripes to march through the streets from the county jail to a “Tent City” detainment camp he created. This is the sheriff’s idea of enforcing immigration law.

I spent every day in fear of being deported.

After high school I attended community college briefly, but I was unable to afford tuition and still provide for my family. Supporting my parents, who had sacrificed so much for me, was essential, and I worried how I could help with the money we needed to raise my siblings. My family and I came together to figure out a way I could help with the finances. I made up a fake Social Security number (it didn’t belong to anyone else), and I got a job at the Old Spaghetti Factory as a bartender. I worked there for years. A few times, I even saw Sheriff Joe Arpaio eat there. Those days were nerve-racking.

I continued the volunteer work I had loved since high school. I was active with the nondenominational faith group Young Life, mentoring at-risk high school students. It was through another volunteer there that I met my wife, Leslie.

I told Leslie I didn’t know what my life would look like, that it was so uncertain and risky, but she didn’t care. She stayed by my side and lifted me up. We saved enough money to buy a house and in 2011 she became pregnant with our first child. It was not long after that the sheriff’s officers showed up at my house, and I faced permanent exile from my family just as our lives together were beginning.

You might think that by marrying a U.S. citizen I’d be eligible for citizenship and would be able to work legally, but that’s not the case. Because I entered the U.S. unlawfully, I cannot apply for citizenship. And unlike other Dreamers, I’m not even eligible for DACA (Deferred Action for Childhood Arrivals), which would give me papers to work and allow me to remain in the U.S. lawfully. Both of my siblings received DACA, but because of the conviction from the restaurant raid, my application was denied.

My arrest brought me to a detainee processing facility where I was charged with identity theft for using false papers to work, a felony in Arizona. My co-workers from the restaurant were there, too, chained together; we were all being prosecuted for working without proper papers. I spent 90 days in county jail, afraid that I wouldn’t see my first child born -- or maybe ever. My family counted on me, the kids in Young Life needed me, and I wasn’t there.

I got lucky. I have a good lawyer, who convinced the judge that instead of keeping me in immigration detention, I should be put on a home-monitoring program. I was released just two months before my son, Jayden, was born. And now, after years of complicated legal issues, I live in limbo: The authorities could reopen my case and order my deportation at any time.

I’m an advocate now and have been meeting with members of Congress to share my story and explain why we need immigration reform to keep families like mine together. Millions of immigrants like me are unable to become legal residents because of a previous conviction, but we deserve a second chance. I need to work to support my family, and I need documents in order to do that lawfully.

I may have come into this country without papers, but it’s the only life I’ve ever known. If I’m sent back to Chihuahua, my children won’t have their father by their side, and my wife won’t have the support she needs and deserves. Who could ever call that justice?