GOP's insane Georgia primary: Why party's establishment will never be the same 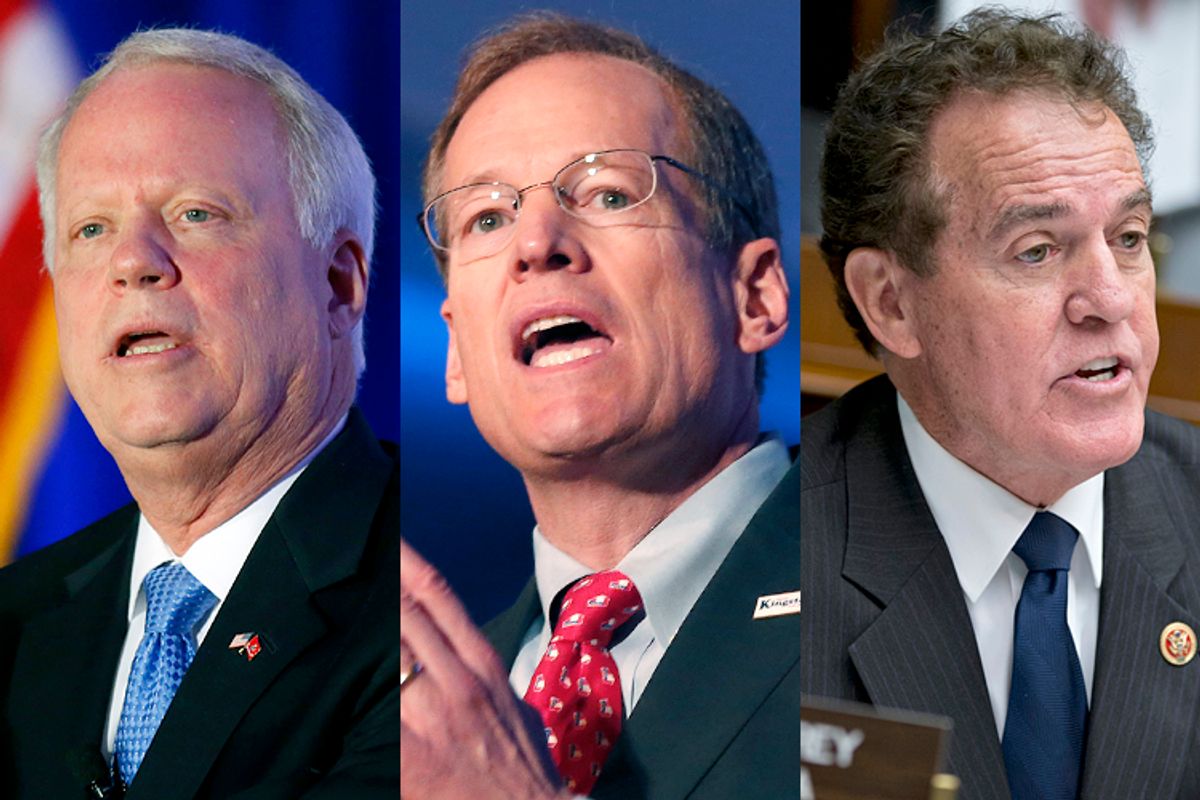 Where oh where does the spring-long whirlybird tour of "Tea Party vs. establishment false primary narratives" land this week?

The drama long ago ran out in Kentucky's once-hyped race between Sen. Mitch McConnell and businessman Matt Bevin, the latter of whom will be remembered in political comedy history for attending a cockfighting rally and giving a speech about cockfighting and then saying afterward that he had no idea he was at a cockfighting rally.

What a truly resounding, who'da-guessed-it win for the establishment: The well-funded minority leader of the United States Senate and kingmaker of Kentucky politics was able to beat a nearby moron. Go suck down some celebratory mint julep or fancy bourbon concoctions with your cigar-chomping lobbyist friends at the Capitol Hill Club, GOP Establishment, because you've earned it: You're going to fend off "Matt Bevin."

Which brings us to the real show Tuesday evening, possibly the finest of the calendar: the Georgia GOP Senate primary.

In his long profile of the race, Politico's Manu Raju explains how the race has shaped out to avoid what was long considered the party's worst fear -- that one of the nuts, either Rep. Phil Gingrey or Rep. Paul Broun, would secure the nomination and lose to a competitive Democrat. Gingrey and Brown are essentially tied for last place among the five candidates; the three top candidates, two of whom will make a runoff, are David Perdue (rich business guy), Karen Handel (infamous former Komen Foundation exec) and Rep. Jack Kingston (11-term congressional appropriator).

But the non-competitiveness of the Broun-Gingrey tandem doesn't mean that the competitive candidates haven't said their own fair share of crazy nonsense in their effort to lurch rightward. Ed Kilgore, who's been following the race closely, offers a little taste of the run to the "starboard side" over the past few months.

Earlier in the campaign, the most remarkable example of the rightward pull of the primary dynamic was in the messaging of Rep. Jack Kingston, a south Georgia career Congressional appropriator who suddenly sounded like the last hope of the conservative movement, with ads hitting racially resonant “welfare bum” themes,savaging Common Core, and boasting of a dubious National Journal ranking as having “the most conservative [House] record in the field.” But now he’s been joined as a former Establishment driver of the conservative cause by former Secretary of State Karen Handel, a one-time protege of Gov. Sonny Perdue from relatively moderate Fulton County who lost a close gubernatorial runoff to Nathan Deal in 2010 in part because social conservatives demonized her as soft on abortion and gay rights. Rebaptized as a fiery Christian Right champion for her failed effort as an executive of the Komen Foundation to cut off ties with Planned Parenthood, Handel is now trying to compensate for her lack of funds by calling out opponents on ideological grounds, aided by RedState proprietor Erick Erickson (who is a Georgian) and Sarah Palin.

As for David Perdue -- Sonny's cousin -- he got himself in a real steaming hellpot this week by referring to increased government revenue as desirable, a conservative-jargon faux pas from which he has quickly distanced himself.

"The candidates," as Politico puts it, "are simultaneously running to the right — questioning the science of climate change, vowing to privatize entitlement programs for future beneficiaries and, in some cases, calling for the self-deportation of undocumented immigrants — and dubbing their opponents sellouts to the conservative cause. It’s the only way to win a crowded GOP primary." And in terms of star endorsements from Real Conservatives, it really is all over the place, offering even more confusion for those who vote according to signals: Handel has Sarah Palin and Georgia blogger Erick Erickson, Kingston has Sean Hannity, and Perdue has Herman Cain (who is still a big thing, in Georgia?).

So the predetermined crazies have been weaned out, and three establishment-acceptable choices who've dangerously doused themselves in Tea Party glory remain. "The eventual winner," Kilgore writes accurately, "will probably look and sound a lot like Thom Tillis: an 'Establishment' pol who is indistinguishable from the Tea Party hordes."

At this point, the only thing that "establishment" connotes is "relatively less likely to go out of one's way to share a contrarian view of rape down the home stretch of the general election."