Alaska is the epicenter of climate change on U.S. soil, but its loony politicians just can't admit it. Here's why 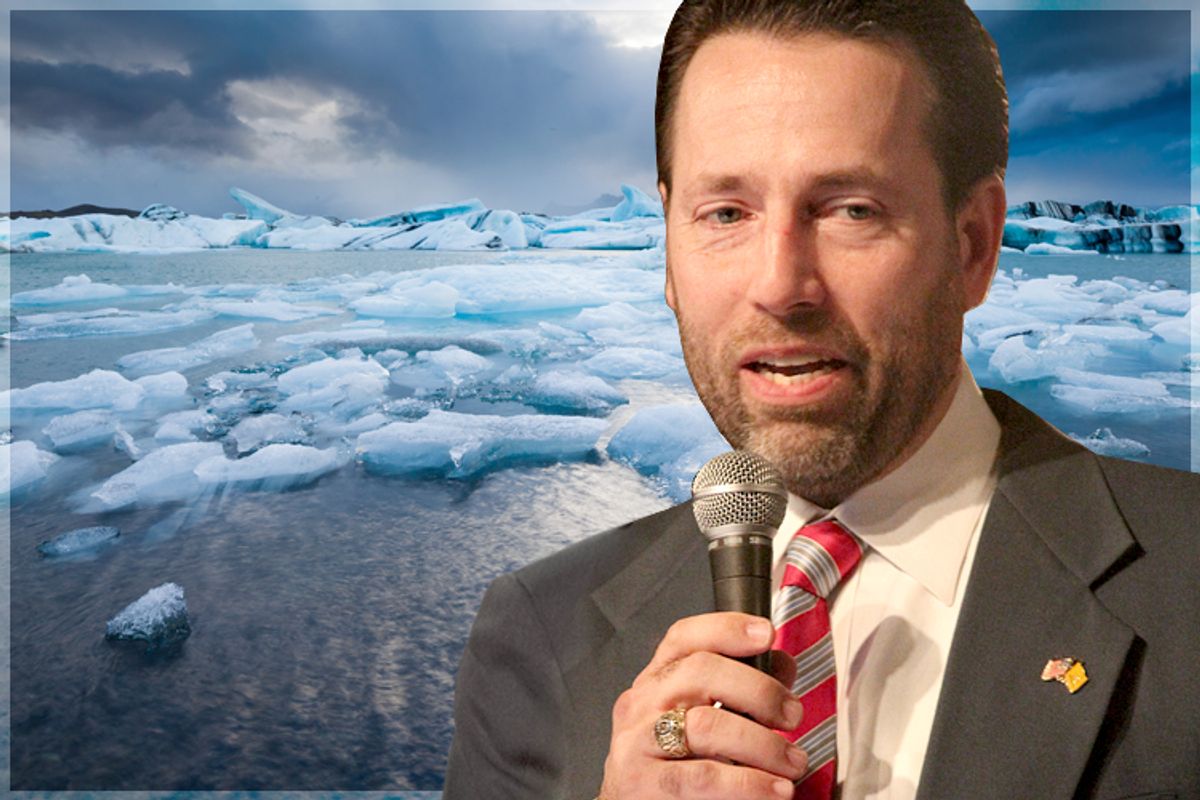 Alaska has long been a home for "colorful" political characters from the time it was a territory. Back in the 1950s and '60s there was a gentlemen named Fred Stickman, a prodigious writer of letters to the editor, who railed against such government handouts as cheap electricity because it would make people lazy if they didn't have to chop firewood. In the 1970s, Joe Vogler, a full-fledged secessionist from Fairbanks, started the Alaskan Independence Party, declaring, "I'm an Alaskan, not an American" (which would have come as something of a surprise to the native Alaskans who were not born in Kansas as he was).

And there is, of course, Sarah Palin, one of the heirs to the Alaskan political culture of Stickman and Vogler, a politician whose husband even claimed membership in the Alaskan Independence Party for several years.

Even the "establishment" politicians lean somewhat eccentric, even as they are firmly in the pocket of the energy industry and the military, which dominate the state's politics. Just recently, Rep. Don Young famously reminisced about hiring what he termed "wetbacks" back in the day. And it was the extremely powerful Ted Stevens who embodied the perfect dissonance of Alaskan self-image -- a powerful Washington politician totally dedicated to serving Big Oil and bringing home the federal bacon, all while declaring Alaska to be the perfect example of frontier independence and self-sufficiency.

If Alaskan politics is a study in contradictions, there is no greater example than the argument over climate change in the Senate race between incumbent Democrat Mark Begich and his rivals in August's Republican primary: Mead Treadwell, Dan Sullivan and the far-right gadfly in the Vogler tradition, Joe Miller of Fairbanks. .

Begich is the "hysterical hippie" of the bunch simply by admitting that climate change exists. Even he, however, is not one to jump on the "we need to do something urgently" bandwagon. He agrees that it should be studied but prefers the issue be discussed in terms of costs and benefits because ... well, because. The knock-down, drag-out fight is among the Republicans. Apparently, no matter how shrilly you decry climate change as a communist plot to destroy everything good and wholesome about America, it is not enough.

For instance, although Lt. Gov. Treadwell insists that he does not believe human beings are contributing to climate change, the fact that he once idly speculated that the reason the Arctic is melting might be because of fossil fuels makes him the equivalent of a Greenpeace activist. He's trying very hard to get back in the good graces of the deniers:

"Since where most of us live in Alaska was once covered by ice, I’m pretty sure humans didn’t cause it all. Whether or not we caused some of it is a discussion that has taken years, and will take more. In the meantime, Alaskans are working to adapt.”

I'm afraid that's not going to be good enough. Meanwhile, the far-right Club for Growth-backed candidate, Dan Sullivan, is also considered a squish on the issue despite the fact that he led the recent Supreme Court case to deny the federal government authority to regulate greenhouse gases. He too is doing everything he can to reassure Republican voters that he is not in the pocket of Big Climate:

"Alaska is on the front lines when it comes to changes in our climate, and with seven billion people on earth, humans will have an effect. However, despite what many climate change alarmists want us to believe, there is no general consensus on pinpointing the sole cause of global temperature trends.”

That's a little too much hedging for the True Non-Believers.

Indeed, the only one who can truly claim the leadership mantle of Climate Change Denier -- apparently a new litmus test among the right wing -- is Joe Miller. Miller, you'll recall from the last Alaskan Senate race, is the Tea Partying, Yale-educated survivalist who forced Lisa Murkowski into a write-in candidacy back in 2010 (which she won). And he thinks he's got the science to back him up. This is from his website:

• A recent study conducted by the Geophysical Institute at the University of Alaska-Fairbanks concluded that the average temperature in Alaska declined by 2.34 degrees between 2000-2010.

• In a CNSNews article this spring, a Canadian evolutionary biologist warned that Arctic polar bears could be threatened by too much sea ice.

What makes all this so astonishing is the fact that Alaska is ground zero for climate change on American soil. In fact, it's one of the places where you can see it happening before your own eyes in real time. The permafrost is melting, which means roads and houses are sinking. Unprecedented flooding is happening all along the coast. Glaciers are rapidly shrinking. Marine life is threatened. (And then there's this little matter of 97 percent of scientists agreeing that today's climate change is man-made.)

You would think that Alaska, with its awesome, unspoiled natural landscape and unique way of life, would be at the forefront of climate activism. But as usual, it is a study in contrasts. With the same sort of contradiction that makes the conservative majority raise their fists at Big Government even as they benefit tremendously from it, the Republicans defend the agenda of Big Energy interests that seek to exploit their beautiful state. Let's hope that cooler heads prevail and the far-right kooks of this era like Joe Miller don't end up making Alaska secede right into the Arctic Ocean.