Who still watches "Survivor"? I do, you pretentious jerks

In light of tonight's season finale, a look inside the intense world of "Survivor" superfans 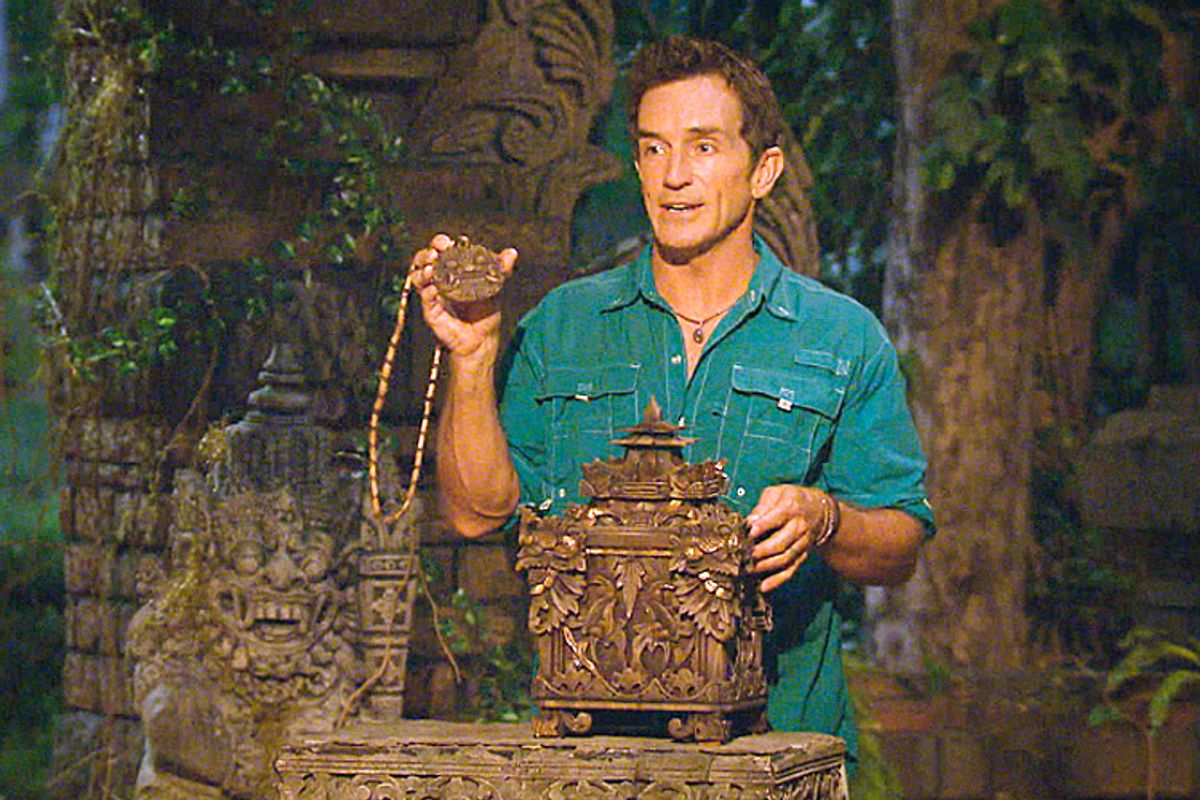 For a certain segment of the population, tonight is a big night — a bit like if the Super Bowl, the Oscars, the Olympics and a marathon of “The Golden Girls” all combined to create one spectacular televisual super-event. It's the finale of “Survivor: Cagayan,” the 28th season in the series. This season has been one for the books. What these castaways lack in cunning gameplay, they’ve made up for with sheer craziness.

I should add that I’m aware that “Survivor” is currently miles outside the zeitgeist. I’d compare the larger culture’s interest in “Survivor” to its interest in the Department of Sanitation: They recognize its impact, they certainly reap its benefits, but not everyone necessarily needs to know all of the details — they are just happy to know it’s there. Some of us, though, are still trucking, still obsessed with this show that captivated the nation 14 years ago. We’re the die-hard “Survivor” superfans.

Will the winner be Woo, the tagalong martial artist whose surfer-vocals rival even the most skilled Keanu Reeves impersonator? Or Tony, the vigilante cop whose bombastic game tactics might go down as the most outrageous in "Survivor" history? Or will it be Kass, a player who — you know what, it’s not going to be Kass. Or lastly, will it be Spencer, a castaway who would probably be reviled by audiences in any other season, but by comparison to his fellow tribe mates, may be the only person actually worth rooting for?

Now, it is likely that you have no idea what any of that means because, frankly, you are a normal person who hasn’t seen an episode of “Survivor” since the show first aired back in 2000. You know the basic structure, of course. A bunch of people are placed on an island, they vote each other out, torches get snuffed, etc. You even remember colorful moments like Sue Hawthorne’s “snake and rat” speech or the censor-blur that hung over Richard Hatch’s naked bottom half, but any other details of the show are a bit hazy.

I remember the days when “Survivor” was quintessential water-cooler conversation. It had been the surprise hit of the summer, and everyone was watching it. There were parodies galore and people awkwardly tried to work in the phrase “the tribe has spoken” at every single opportunity. As a teenager, my family would often forgo family dinners, but without fail, we would gather for “Survivor.” My dad would vociferously discuss his opinions of each player, my sister and I would laugh, and my mom would turn the volume up louder and louder.

But aside from bringing my family together, the show had a massive effect on popular culture. In 2009, Variety called “Survivor” “the most influential program of the soon-to-be-concluded decade” (amazing considering that “Toddlers and Tiaras” aired that very same year). The show not only spawned a whole host of similarly themed programming, but it effectively revolutionized our culture’s understanding of celebrity. Suddenly used car salesmen, waitresses and high school physics teachers were making the rounds on morning shows and had full-page spreads in Us Weekly. Today it’s a media model that we take for granted, but before shows like “Survivor” thrust regular Joes into the limelight, you had to have some skill like acting or modeling or murdering to be considered famous.

“Survivor” can also be credited with establishing a new lexicon for reality competition shows – words like “blindside” and “alliance,” and phrases such as “thrown under the bus,” “chopping block” and the ultimate reality TV catchphrase, “I’m not here to make friends,” which was first uttered by Kelly Wigglesworth in Season 1.

And yet today, as a fan who has seen every single season, I am often hard-pressed to find others like me. But fortunately, not only are there people out there who still love this program, but some of them are positively nerding out. We convene on message boards and at viewing parties. We have curated a detailed “Survivor” wiki, which includes impressively thorough stats for every contestant who has ever competed. We listen to podcasts featuring interviews with ousted castaways such as The Tribe, or Rob Has a Podcast, which is hosted by former two-time "Survivor" contestant Rob Cesternino.

There are even Fantasy Survivor leagues scattered across the Internet. I would argue, though, that none is as fun and well-crafted as the one designed by my husband. What started as a joke has actually turned into a sophisticated game with algorithms and everything. Together with 15 of our friends in a Facebook group, we make our picks at the start of each season for categories such as “First to cry,” “Angriest juror,” “First to claim they are in control of the game,” etc. The tropes of the series have become so reliable in every season that we have a blast making our predictions. It is arguably the nerdiest thing I have ever taken part in, and in case you were wondering, I’m tied for third place right now.

Being an ardent fan of “Survivor” feels a lot like being in on a secret. Of course, it’s not a secret at all. CBS promotes the show like crazy and almost everyone at least knows its basic premise. But it’s certainly not prominent in the cultural conversation; critics pretty much seem to have forgotten it exists. So there’s something special about having been there from the beginning with our host Jeff Probst. For the record, if anyone is looking for someone who made a pact with the devil, look no further than Jeff Probst because he hasn’t aged a damn day in the past 14 years.

“Survivor,” meanwhile, has aged like a fine wine. With new elements like hidden immunity idols and returning players, the show has only gotten more complex and interesting. The skill that contestants bring to the game is so far beyond what those people were doing in Borneo in Season 1. At that time, strategy and alliances were actually condemned, seen as sneaky and manipulative. Now it is pretty common knowledge that players who aren’t hustling in their social game are probably going to go home pretty fast (that, or they will be dragged to the end to receive no votes from the jury).

In the end, the strategic element of the game really is the true core of “Survivor.” During the show’s infancy, the world wrongfully assumed that “Survivor” would simply be about persevering in the wilderness, but the moment the word “alliance” was uttered, the program actually became an important sociological experiment. Every now and then there are still contestants who come to the game genuinely believing that they can win by catching fish and climbing trees. To them I say, oh honey, that is the least of your worries. In a game in which so much is dependent on finding people who hopefully won’t lie to you and whose strategies support yours, knowing how to start a fire just isn’t enough.

The show's winners have been from all different walks of life, socioeconomically, sexually and professionally. There have been physically strong winners, weak ones, short ones, fat ones, skinny ones. Technically, anyone could win this game, but they have to work their butts off with the cards that they have been dealt. It is as American dream-y as a show can get, if you think about it.

“Survivor” seems to be one of the few shows where viewers can call themselves “reality television purists” without much irony. It has evolved into a more complex and challenging game, but its principles have remained the same: Outwit, Outplay, Outlast. Where other reality shows might need sudden twists and curveballs, “Survivor” only really needs its own basic structure, and because the people who play will always be different, the game will always be different. No tricks, no gimmicks – just pure gameplay, which means that absolutely anything can happen. This season a nuclear engineer, whose typical work duties include analyzing technologies to be used in weapons of mass destruction, angrily tossed her tribe’s food supply into a fire and still managed to escape being voted out. How are we not all watching this?!

Tonight at around 10 p.m., a winner from this season will be announced. Jeff will interview the castaways, whose faces will be a bit fuller than when we last saw them, and at the end of the episode he will tease the next season. If you’ve been that guy at the office over the years dismissing “Survivor” as just another vapid reality show, consider giving it another shot in Season 29. Seriously: You don’t know what you’ve been missing.