"X-Men: Days of Future Past": Superheroes face the sunset 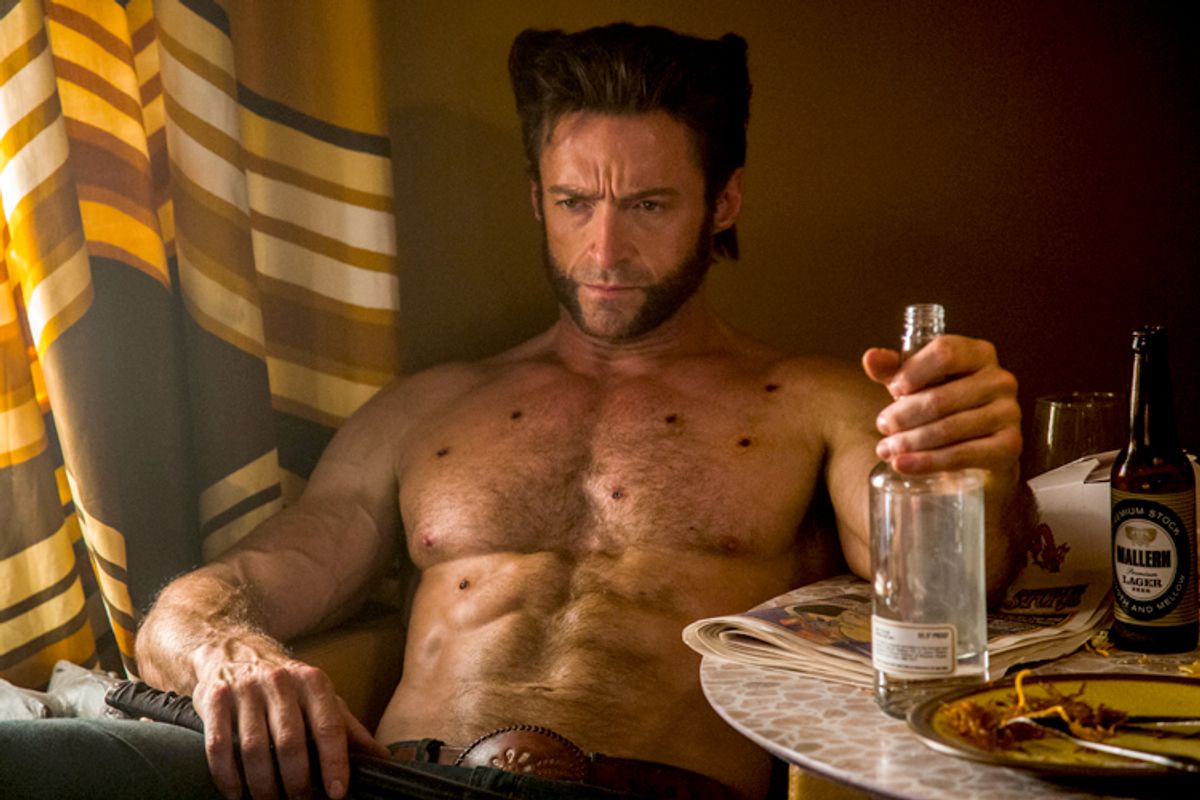 Hugh Jackman in "X-Men: Days of Future Past"
--

One of the problems with superhero cinema in what might be called its decadent or rococo phase is that all possible narrative modes and approaches have been tried, and all that the armies of highly skilled Hollywood people can do is to gild the lily at immense expense -- to do it all over again “better,” or at least with more elaborate special effects. This back-to-the-future problem is handled with a high degree of ingenuity in Bryan Singer’s $250 million action spectacle “X-Men: Days of Future Past,” a movie about the erasure and/or replacement of the past that combines the casts of the original and rebooted X-Men franchises, rather like whichever “Star Trek” movie it was where Capt. Kirk met Capt. Picard.

I basically really enjoyed this movie, even while lamenting that I was enjoying it under mendacious premises and that there was something fundamentally cynical about its elegiac, retrospective tone. In reality, this is a middle-chapter movie in an apparently endless saga; if you’re not habituated to this franchise and its universe, the first 15 minutes or so will be utterly bewildering. But in between the whiz-bang action scenes and the high-flown moral debates – Singer’s films have excelled at capturing the adolescent moral gravity of actual comic books – “Days of Future Past” thrives on the sunset mood of a grandiose final chapter, a story of godlike beings facing the end. It feels like the “Götterdämmerung” of this particular Marvel story-stream, but of course we can never have such a thing, or at least not on purpose. (Singer plans to direct at least one more X-Men movie, and after that another Wolverine film along with a spinoff X-Force franchise are both contemplated.) These franchises may exhaust themselves commercially, in the fullness of time, but they are designed to go on forever, morphing and reshaping, rewriting the past and birthing new offspring.

My objection is a silly one on some level, the residue of a generation who were taught to buy the album because of one great song, and who cling to the charming idea that movies are supposed to be self-contained stories with beginnings and endings. No such things can be said to exist in a cultural stream that consists entirely of fragments. The fan-bait “stingers,” or micro-teasers for future chapters, found after the end credits in every Marvel movie, fall somewhere between a promise and a threat: It’s never over! By making an old-fashioned trilogy (on 35mm film) and then getting out of the superhero game, Christopher Nolan revealed himself as a man of the past. We can experience “Days of Future Past” as a moment of closure and a story about mortality while understanding that in the pop-culture sphere those things are endlessly and instantly reversible. That’s also a genuine legacy of comic books; no other cultural form has emulated the pattern established by Arthur Conan Doyle – killing off a beloved character and then bringing him back – on such a grand scale.

Let’s see: I’m supposed to give away almost none of the movie’s events while still providing some sense of the frame; is that about right? I trust it’s no spoiler to reveal that Patrick Stewart and Ian McKellen, beloved senior statesmen of pop culture and the stars of Singer’s first two “X-Men” movies in 2000 and 2003, are back, albeit in glorified cameo roles. This movie’s present tense – always problematic in a time-travel story! – is somewhere deep into the 21st century, when the war between human society and mutants has gone really, really bad. Evil human scientists have used stolen mutant DNA to craft terrifying robot warriors called the Sentinels, who are not only impervious to most tricks of mutant warfare but can also absorb the talents of mutants as they fight them. Prof. Charles Xavier (Stewart) and his longtime foe Magneto (McKellen) give shelter to one last band of mutant rebels, who have only survived thanks to the nifty time-shifting abilities of Kitty Pryde (Ellen Page), who’s able to undo disaster at the last minute by flinging Bishop (Omar Sy) a few days backward with foreknowledge of a coming assault. It’s all very “Matrix Reloaded” – ragtag multicultural hipsters vs. the gray, crushing forces of conformity – but I don’t say that like it’s a bad thing.

Somebody must volunteer to be projected way, way back into the past – into the waterbed grooviness of 1973, to be specific – in order to stop the blue, demented blur of hotness known as Raven and/or Mystique (Jennifer Lawrence, aka She Who Is Cast in All Movies) from perpetrating an act of vengeance that will launch this entire concatenation of apocalypse. That someone, of course, is Hugh Jackman’s Wolverine, whose impressive physique can recover from any degree of injury or trauma. And that’s where this movie turns into a sequel to the entertaining but exhausting reboot “X-Men: First Class,” in which the young Xavier (James McAvoy) and the pre-Magneto Erik Lehnsherr (Michael Fassbender) do battle with each other, the Russians, the Americans and the overcooked early-‘60s ambience. I’m curious, by the way: Can we use this technique to send somebody back to 1983 and pass some serious energy legislation under President Walter Mondale or whomever? Because it’s for damn sure too late now.

There’s certainly some color and comedy in the way Singer, screenwriter Simon Kinberg, cinematographer Newton Thomas Sigel and production designer John Myhre capture the early ‘70s milieu, especially a delightful scene in a chic Paris nightspot where Mystique ensnares a North Vietnamese officer. But they avoid the ham-handed stereotypes that made “First Class” feel borderline unbearable, and much of the action takes place in and around an important historical event few people remember, the Paris Peace Accords that ended American involvement in the Vietnam War. This moment of Cold War rapprochement offers a key marketing opportunity to Dr. Bolivar Trask (played by “Game of Thrones” star Peter Dinklage), the pioneer of anti-mutant research. Like all true villains, this mild-mannered mini-Mengele is convinced that his cause is noble; Trask tells an underling he does not hate mutants but admires them, and that the threat they pose will unite the rest of humanity and bring an era of everlasting peace.

Jackman’s Wolverine is kept extremely busy in this chapter: He has to rouse McAvoy’s Xavier from bitter isolation, figure out how to spring Fassbender’s Magneto from an ultra-secure underground prison cell and then convince these two sworn enemies to work together against a woman (or she-mutant, anyway) with whom they’re probably both in love. There are some truly dazzling effects sequences in this portion of the film, the most exhilarating of which involves a guest appearance by the lightning-fast young mutant who will later be known as Quicksilver (Evan Peters) – and whose simultaneous existence in this universe and the Joss Whedon “Avengers” universe has been a matter of extended legal wrangling. Meanwhile, back in the Stewart-McKellen future-present, darkness is falling and the deadly Sentinels are closing in.

McAvoy and Fassbender both get considerable chances to shine in the less frenzied parts of “Days of Future Past,” and the conflict between Xavier’s faith in human-mutant reconciliation and Magneto’s nihilistic drive toward evolutionary warfare becomes a lot clearer. With human society apparently headed by Richard Nixon (amusingly impersonated by Mark Camacho, who’s also ready to play Chris Christie if anyone’s interested), it’s tough not to side with Magneto’s appetite for destruction, which is played out on the physical landscape of Washington, D.C., to satisfying effect. No doubt I’m a sap for finding the manipulative redemption at the conclusion of their struggle as emotionally affecting as I did, since it necessarily will be undone in whatever chapter follows. Still, the note of backward-forward Marvel nostalgia struck at the very end of “Days of Future Past” is lovely, and you can leave right after that. (I've grown increasingly immune to the allure of the post-credits stinger, and this one is particularly useless.)

"Days of Future Past" is a massively expensive film, with somewhere around the fifth- or sixth-highest budget of all time. It may or may not mark McKellen and Stewart’s swan songs in these roles – both are in their mid-70s, though they show no obvious signs of slowing down -- and it may or may not ultimately disappear into the general icing-without-a-cake sameness of the superhero genre. If you want to argue that there’s something immoral about spending all that money to make a disposable entertainment, you might be right. But with this and Gareth Edwards’ “Godzilla” (which I did not claim was the best action movie since "Jaws") packing the multiplexes, Memorial Day moviegoers have two popcorn-friendly options that absolutely, positively, do not suck. Late-stage capitalism at its finest.