One reason Americans have trouble maintaing a healthy diet: They're suffering from "food information overload" 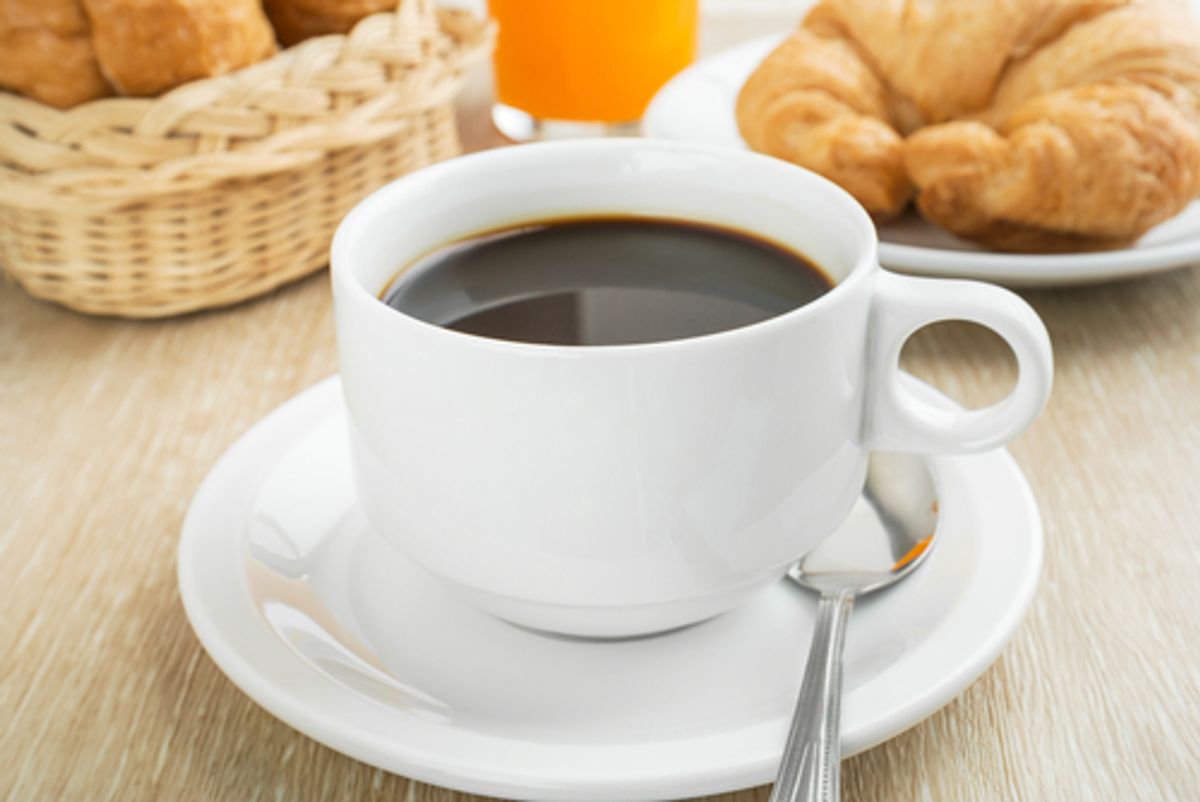 It isn’t hard to understand why some Americans rebel against trying to maintain a healthy diet: they are bombarded with so many conflicting studies, opinions and articles on nutrition that “food information overload” inevitably sets in.

Fed up with all of the conflicting information on everything from red wine to coffee to soy, they tune out the noise, develop a fatalistic attitude and say, “When it’s my time to go, it’s my time to go. I’m going to eat what I want when I want.” And a 2010 study conducted by Rebekah Nagler, assistant professor for the University of Minnesota's School of Journalism and Mass Communication in Minneapolis, shows just how inundated people are.

Nagler found that — of the 631 adults who were surveyed — over 71 percent of them said they heard moderate or high levels of conflicting information about nutrition from the media. According to Nagler, people might become so fed up with all that food information overload that they start ignoring nutrition-related articles in general.

Sorting through all the mountains of studies and articles that contradict one another can be overwhelming: soy is a miracle food — no, soy is terrible for you. Red wine will lower your LDL cholesterol and help you live longer — no, red wine will give you cancer. Orange juice boosts your immune system — no, it gives you diabetes and is almost as bad as diet soda. It’s no wonder that consumers have a hard time trying to figure out where the truth lies.

Below are 10 foods and beverages that have been praised by nutritionists one minute and demonized the next.

Studies on the health benefits — or hazards — of coffee are all over the place. In August 2013, the results of two studies on coffee (one by Mayo Clinic Proceedings, the other by Duke-NUS Graduate Medical School) came out around the same time — and while Mayo equated coffee consumption with premature death, the other described it as a way to live longer. Mayo’s study of 40,000 people found that “drinking large amounts of coffee may be bad” for those under 55 and noted “a statistically significant 21 percent increased mortality in those drinking more than 28 cups of coffee a week.”

But Duke-NUS found that consuming 28 cups of coffee per week could decrease the risk of non-alcoholic fatty liver disease, a.k.a. NAFLD. And the contradictions don’t end with those two studies. A 2013 study by the Western Australian Institute for Medical Research (WAIMR) and the University of Western Australia’s School of Medicine and Pharmacology linked the consumption of five or six cups of coffee per day to weight gain and metabolic syndrome, but a 2012 study by the French scientific review Phytothérapie linked regular coffee consumption with weight loss and diabetes prevention.

Whenever a type of food receives an abundance of good publicity, there will likely be other researchers telling us just how awful it really is. A case in point is olive oil, which is wildly popular in Spain, Italy, Greece and Portugal and is a prominent part of the Mediterranean diet. Under the supervision of Dr. Ramon Estruch of the Hospital Clinic of Barcelona’s Department of Internal Medicine, researchers in Spain spent five years studying the effects of olive oil — and theirresearch, which was published in the New England Journal of Medicine in 2013, found that those who ate a diet high in extra-virgin olive oil were 30 percent less likely to suffer a heart attack or stroke.

But research conducted by Dr. Robert Vogel of the University of Maryland School of Medicine and published in the Journal of the American College of Cardiology in 2011 found that olive oilreduced blood flow to the arteries by 31 percent after consumption (thus promoting heart disease).

Dr. Dean Ornish, another nutritionist, is equally critical of olive oil, constantly pointing out that it’s too high in saturated fat. Some articles claim that olive oil has a low smoke point and can become toxic and carcinogenic if used for cooking, yet Elena Paravantes-Hargitt (a Greek-American nutritionist who has written extensively on the Mediterranean diet) has countered that olive oil is perfectly OK for frying and stresses that the cooking habits of Greeks, Spaniards and Sicilians should be emulated — not avoided. So whenever olive oil is demonized in an article or study, have no fear: an article touting its benefits is right around the corner.

Depending on which article you read, orange juice is anything from a miracle in liquid form to Lucifer’s beverage of choice. For many years, orange juice was praised as a healthy source of vitamin C — especially if it was orange juice of the not-from-concentrate variety. In 2010, the American Journal of Clinical Nutrition reported that orange juice consumption is heart-healthybecause it “neutralizes the pro-inflammatory effect of a high-fat, high-carbohydrate meal.”

But in some circles, it’s trendy to vilify orange juice these days. Author Alexander Heyne, for example, warns that “drinking orange juice is slowly killing you” because it is “high-carb and high-sugar.” Orange juice, according to Heyne, promotes diabetes and obesity and is only slightly less deadly than soda. So, to summarize, orange juice is great for prolonging your life and great for ending it prematurely.

If the Prohibition supporters of the 1920s were around today, they would not be happy with all the studies painting moderate red wine consumption in a positive light — for example, a 2012 study by researchers at the Hospital Clinic, Villarroel in Barcelona indicating that for men, a glass of red wine per day can help prevent heart disease. Or a 2005 study by the Institute of Preventative Medicine in Copenhagen, Denmark showing that red wine can increase one’s HDL cholesterol(the so-called “good cholesterol”) anywhere from 11-16 percent. In 2002, a study by Spanish researchers showed that people who consumed two glasses of red wine per day had 44 percent fewer colds than teetotalers.

But in 2012, a study by the Center for Addiction and Mental Health (CAMH) in the UK questioned the health benefits of red wine — especially for women. Dr. Juergen Rehm of the Centre said that for women, “even one drink a day increases risk of breast cancer.” And yet, a 2011 study led by Dr. Sebastanio Ando of the University of Calabria in Italy found that resveratrol (an ingredient in red wine) can inhibit the growth of breast cancer cells.

Soy is one of the most praised foods of the 21st Century as well as one of the most maligned. Over the years, many articles and news reports credited soy with fighting everything from prostate cancer to high LDL cholesterol. An article on the PETA website insists: “Soy is known to be a healthy food. It has cardiovascular benefits, helps prevent prostate and colon cancers, lessens hot flashes in menopausal women and protects against osteoporosis. The antioxidants in soy may even benefit asthma sufferers.” And in a 2010 article for the Huffington Post, Dr. Neal Barnard (president of the Physicians Committee for Responsible Medicine and a major proponent of veganism) offered a long list of reasons why he believed soy to be beneficial.

But there has also been an avalanche of anti-soy articles, and Dr. Joseph Mercola has linked soy consumption with everything from male infertility to breast cancer to a shortage of B-12 vitaminsto hypothyroidism. When it comes to soy, there isn’t a lot of nuance in many articles — either soy is a miracle food, or it is one of the worst things you can put in your body.

Tea drinkers are not exempt from information overload. Many studies have been favorable to tea, saying it is loaded with antioxidants and helps combat free radicals. A Japanese study from 2008found that tea consumption can lower one’s risk of hypertension and heart disease.

But in 2012, a University of Glasgow study claimed that men who were heavy tea drinkers had a50 percent greater risk of developing prostate cancer. And in 2009, a study published in theBritish Medicine Journal linked heavy tea consumption with esophageal cancer.

Kale, in recent years, has managed to surpass even broccoli as the cruciferous “miracle food du jour” among nutritionists. Countless articles have touted the benefits of kale, describing it as loaded with antioxidants, iron and calcium. Vegans and vegetarians love kale, and even carnivores on the Atkins Diet eat kale with their steak and pork chops.

With all the good publicity kale has received, it was only a matter of time before someone knocked kale off its pedestal — and sure enough, in January, The New York Times published an article by Jennifer Berman noting that heavy consumption of kale and other cruciferous vegetables can lead to hypothyroidism. How long can it be before someone comes out with a study blaming kale for diabetes, cancer, osteoporosis or all of the above?

Opinions on salmon are all over the place. Articles have praised salmon for its abundance of iron, niacin, omega-3 fatty acids and vitamin B-12.

But an article on the PETA website insists that salmon consumption is one big health hazard. A 2013 study conducted by Duo Li (a professor and nutrition specialist at Zhejiang University in Hangzhou, China) contends that eating salmon regularly can help prevent breast cancer, yetPrevention.com warns against eating either factory-farmed salmon or wild Atlantic salmon. And a Health.com article defends farmed salmon, asserting that it is “healthier than you think.”

Whether a pint of Guinness is going to help you live longer or help send you to an early grave all depends on which study you refer to. A 2013 study by the Clinical Journal of the American Society of Nephrology asserts that men and women who drink a moderate amount of beer reduce their risk of developing kidney stones by 41 percent. That same year, CNN.com reported that beer, like wine, was healthy because of the antioxidants it contains.

But it was also in 2013 that researchers for the Alcohol Public Health Research Alliance (AMPHORA) said that drinking more than two beers per year increases one’s risk of developing cancer. And Foodbabe.com claims that beer can contain high-fructose corn syrup or GMOs.

Anyone trying to determine whether white potatoes are healthy or unhealthy can find a mountain of opinions — both pro and con — to sort through. White potatoes have received an abundance of negative publicity from the anti-carbohydrate crowd: in a 2011 article, for example, HealthierTalk.com’s Jenny Thompson describes potatoes as “so dangerous,” “a starch bomb that hits your system like a bag of candy” and “worse for you than a 12-ounce Coke.”

But another health writer, Sandi Busch, is full of praise for potatoes, exalting them as “a rich source of fiber, iron, vitamin C and vitamin B-6.”