Dear graduates: Don't follow your dreams (A commencement speech for the mediocre)

The brutal truth is that most people can't pay the bills by "living their passion." So what can we do instead? 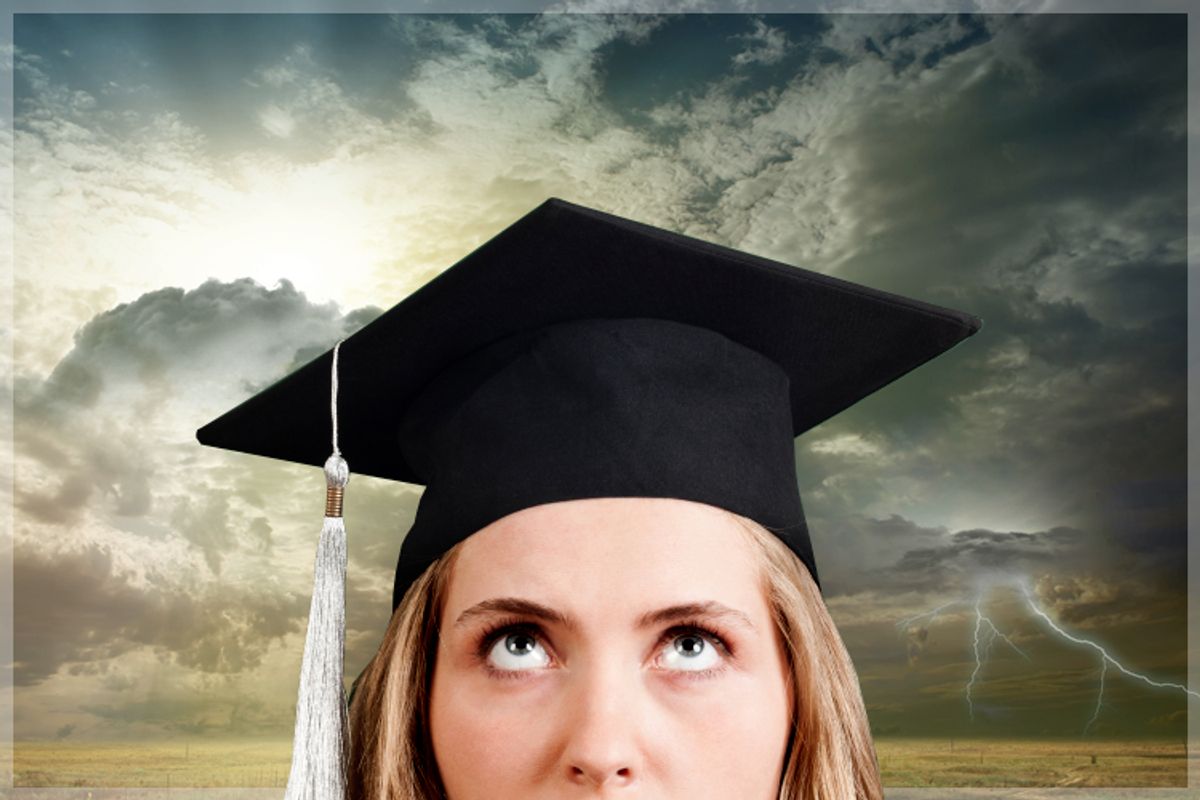 A little over a year ago, I was a waiter. For nine years, I toiled in a number of bars and restaurants from Boston to Las Vegas and a lot of places in between. I'd earned my degree (in a manner of speaking) from Emerson College in creative writing, but by the time I graduated, I was already making more money waiting tables than I could ever hope to earn as an entry-level drone at a publishing house, or marketing firm, or somewhere else I'd surely hate. I didn't particularly love working in restaurants, mind you, but I did like the people, and I really liked the money, and I was happy to have a lot of time to myself to pursue the subjects that interested me: politics, graphic novels, art, board games with good friends, wine and women.

I had a lot of interests.

But I also had absolutely no idea what I wanted to "do" with my life, in the sense of earning a living while pursuing a career that I might not completely hate. Restaurants were an easy default to fall back on, with the added benefit of building a résumé, references and the experience in the industry that people look for when hiring someone for a job.

Years passed, and I worked at one restaurant after the next. At one point I took up painting, and for a while, I thought maybe I'd found a meaningful, serious passion that I could pursue outside my life as a waiter. It didn't last. For the most part, I was very happy but completely unfulfilled. I craved something bigger, even if I hadn't the faintest clue what that "thing" might be. In short, I lived the life that many of you will surely experience in the coming years, despite the fact that most commencement speakers don't want to address this difficult, unfortunate reality.

See, commencement speakers are the outliers -- the most successful, interesting people that colleges can find -- and their experiences are the most inspirational but also the least realistic. Even worse, they tend to be far too willing to dish out the craziest, worst advice, simply because it somehow worked for them. "Follow your dreams" and "live your passions" are insanely unhelpful tips when the bills need paying or the rent is almost due. Invariably, commencement speakers tend to be the lucky few, the ones who followed their dreams and still managed to land on their feet: Most of us won't become Steve Jobs or Neil Gaiman, regardless of how hard we try or how much passion we might hold. It's far more likely to get stuck working as a waiter or bartender, or on some other dead-end career path. Most people will have to choose between "doing what they love," and pursuing the more mundane promise of a stable paycheck and a promising career path. And there's absolutely nothing wrong with making the latter choice; in fact, I'd usually recommend it.

But for all of those young graduates who look out today and see a limitless horizon of excitement and opportunity, I hate to be the one to say it, but you probably won't get there. And I've often wondered if, perhaps, those of us who ended up waiting tables or working the dead-end office jobs would be better suited to offering real advice to new graduates, advice tailored toward the majority, those who won't attain the loftiest heights of their dreams -- but still must find meaning and value in our imperfect world. And for those people, the rest of us, my advice is quite simple: Stay curious and keep learning.

Your job might be terrible, it might be horribly boring and physically draining like mine was. You might work in a terrifying corporate culture that stifles creativity and punishes independent thinking. You might be forced to watch round after round of layoffs and budget cuts, wondering if and when the ax will fall on you. And of course, there are plenty of other terrible ways that your life can turn sideways, too.

Boredom is a sickness. The complacency of sitting still is a crime against yourself, against your own ability to find meaning and happiness in our often-dreary world. We live in a hyper-connected culture that offers more opportunities than ever before to find new information, to keep learning and growing as a person. (And you can choose to absorb whatever kind of culture that interests you: Binge-watching "Breaking Bad," "learning" about fine wine and craft beers, or even reading graphic novels by the likes of Brian K. Vaughn, Alan Moore and Grant Morrison totally counts.)

You can never really know where your journey will take you. When my own journey started, I was still waiting tables full-time. Fast-forward one short, incredible year, and I've left the industry behind, creating a career for myself that pays me to write for a massive audience about the issues and ideas that I care about, and that don't get nearly enough attention in our media. I've gone on TV and radio interviews, I've been profiled by a Dutch newspaper, and soon I'll be in a major documentary. Pretty good for a lowly waiter, right?

In those long, listless years, I also found the love of my life -- soon after meeting her, I moved to New York City to be with her, and years later, to Las Vegas for her job. A "career" in restaurants meant that I could move anywhere in the world, and the longer I stayed in the industry, the more contacts I accumulated. I left family and friends behind to be with my then-girlfriend (now wife) and that's an important lesson, too. She provided me with mental stability, so that I could focus on my passions. She made me accountable. And she made it a whole lot easier to move away from the lazy, comfortable cocoon of friends and family. Familiarity and social circles are great, but if your life is stuck on neutral, complacency can become a terrible trap. Sometimes, changing your life means leaving your comfort zone. And it helps to have someone at your side when you make that change.

A year ago, the night my first article was published on Salon -- the first piece I ever submitted anywhere  -- I had to go into work at my job on the Las Vegas strip, serving cheeseburgers and steak and eggs to drunk tourists from midnight until 8 a.m. And though I knew that my life had changed forever, I had no idea how it had changed -- no idea what to do next, or how to leverage this opportunity into something bigger. Knowing where I wanted to go didn't mean that I had the faintest idea of how to get there. But my decade of always staying curious, of constant reading and learning, had unintentionally provided me with the necessary foundation to pursue this newfound dream, to get paid for the act of writing and thinking.

Of course, I was still tremendously lucky throughout, and much like other commencement speakers you might hear, if you try to follow the path that I took, you're likely to fail. Not many bartenders become political commentators, after all, and if success were as simple as wishing for it, the 19 million people who've read the bestselling self-help tome "The Secret" would be fabulously wealthy and married to beautiful people.

I've always valued learning intrinsically, as an end unto itself. And more and more, that seems like the key. Curiosity provides life with wonder and excitement beyond our crummy, quotidian routines. A passion for learning, an unqualified commitment to pursuing your interests -- and seeking new ones -- will carry you through the good times and bad times, the rich times and poor times, the miserable times and happy ones.

So stay curious. Keep learning. Never stop enjoying the wonder of the world, and never lose the curiosity that got you here today, through four years (or more) of long papers and difficult tests, heated discussions and late-night confusions. Your education shouldn't end with the turn of a tassel, or the reception of a degree.