Hey, Gwyneth, let Angelina show you how to talk about moms

Jolie gets right everything Paltrow got wrong 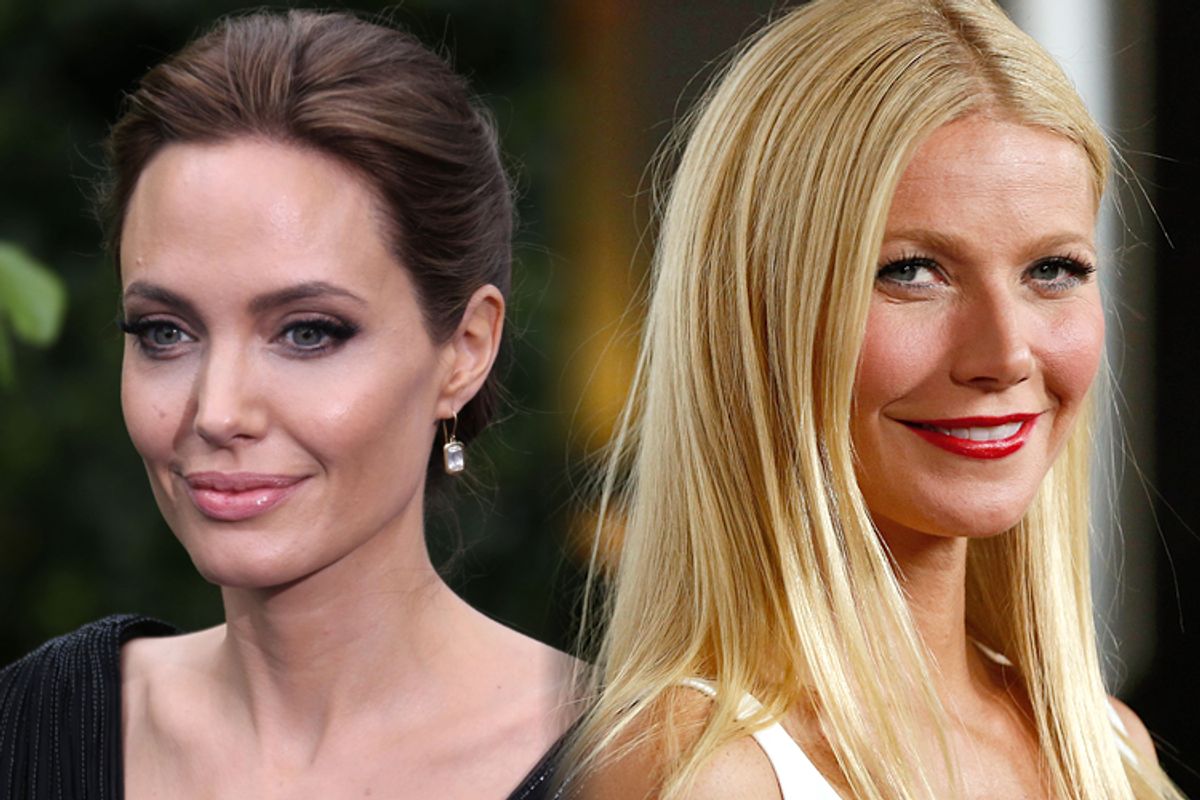 There's no question that motherhood is demanding -- even for rich, beautiful, successful, Oscar-winning women who grew up in royal Hollywood families and who have at their fingertips resources beyond the dreams of most mere mortal parents. Yet in their recent public comments about "the world's toughest job," Angelina Jolie and Gwyneth Paltrow have offered the public two very different views on parenting styles.

In March, newly consciously uncoupled Paltrow, continuing her quest to win "Most Out of Touch Celebrity Ever," told E! about her "rule about one movie a year," explaining, "It's much harder for me. I feel like I set it up in a way that makes it difficult because … for me, like if I miss a school run, they are like, 'Where were you?' I don't like to be the lead so I don't [have] to work every day … I think it's different when you have an office job, because it's routine and, you know, you can do all the stuff in the morning and then you come home in the evening. When you're shooting a movie, they're like, 'We need you to go to Wisconsin for two weeks,' and then you work 14 hours a day and that part of it is very difficult. I think to have a regular job and be a mom is not as, of course there are challenges, but it's not like being on set." This quite naturally set off a spate of guffaws from humans who have actually worked in offices, including a scathingly hilarious retort from writer Mackenzie Dawson, who observed, "'Thank God I don’t make millions filming one movie per year' is what I say to myself pretty much every morning as I wait on a windy Metro-North platform, about to begin my 45-minute commute into the city…. Livin’ la vida desk job is a breeze compared to the 14-hour days of a film set. Fourteen hours? Who in New York — especially those in the finance, law and tech professions — could possibly work 14 whole hours?"

A few weeks later, Paltrow, clearly stunned that anyone would take umbrage with her declarations, penned a Goop column on "ending the mommy wars" in which she said her remarks were "somehow was taken to mean I had said a 9-5 job is easier, and a lot of heat was thrown my way, especially by other working mothers who somehow used my out-of-context quote as an opportunity to express feelings (perhaps projected) on the subject." So let's get it straight – she never said a 9-to-5 job was easier. She just said that "It's much harder for me" and that "to have a regular job and be a mom is not … like being on set." God, why so judgy? She went on to ask, "Why do we feel so entitled to opine, often so negatively, on the choices of other women? Perhaps because there is so much pressure to do it all, and do it all well all at the same time (impossible)." Truth to that, Gwyneth. What kind of a person opines, negatively, about the choices of others, like by pointing to their stomachs and demanding they "Get it together"? Certainly no judgment -- certainly not against people at a lower income -- implied in saying you'd rather "smoke crack than eat cheese from a tin" or would "rather die than let my kid eat Cup-a-Soup." Then again, what kind of judgment could one possible get out of referring to office work as "routine"?

Contrast now, if you will, Angelina Jolie's observation to the Daily News this week, in which the mother of six made similar statements about her own work schedule, saying, "When I feel I'm doing too much, I do less, if I can. And that's why I'm in a rare position where I don't have to do job after job. I can take time when my family needs it ... I can say I can only get into the [editing] room after the kids are in school, and I have to be back for dinner, and they're coming for lunch." But unlike Paltrow, she didn't see her choices as an argument for how much "harder" her career is. Instead, she said, "I'm not a single mom with two jobs trying to get by every day. I have much more support than most people, most women in the world. And I have the financial means to have a home and health care and food ... I actually feel that women in my position when we have all at our disposal to help us, shouldn’t complain. Consider all the people who really struggle and don’t have the financial means, don’t have the support, and many people are single raising children. That’s hard." Blammo.

I have no doubt that both Paltrow and Jolie love the daylights out of their children and are doing the absolute best they can to provide for and nurture them. I know both women have, in the course of their parenting, gone through marital breakups that were no doubt incredibly challenging and painful. And, frankly, if Angelina ever wants to complain she's having a rough day, she's entitled to have a few just like everybody else. But if you're going to shoot your mouth off about not only your motherhood but the task of it in general, and what the experience might be like for people who don't have anecdotes involving their time at "a Japanese monastery during a silent retreat" or getting cooking lessons from Jamie Oliver, try not to be a complete tool about it. Have a little empathy for the people who do not have nannies and wood-burning pizza ovens. You want to end the "mommy wars"? Be nicer about the other moms in it.