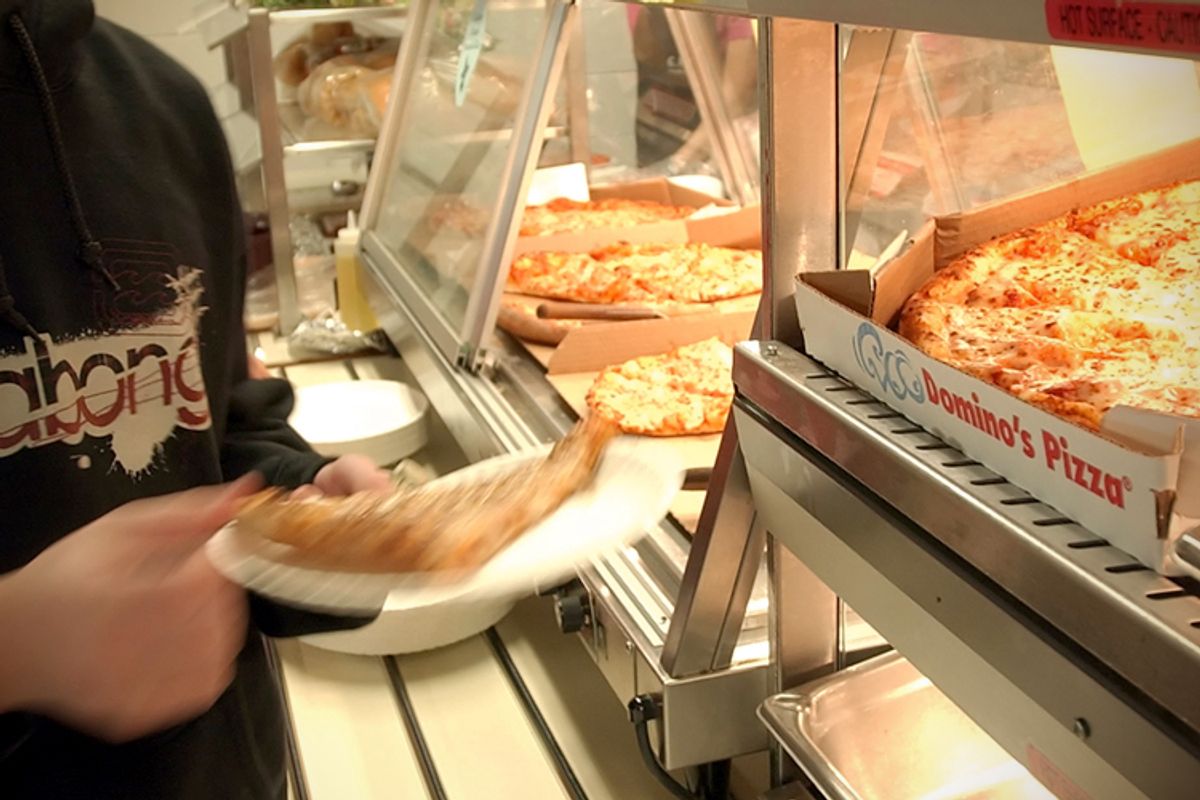 During the Democrats' productive 2010 lame-duck session of Congress, one of the major legislative items they were able to pass was the Healthy, Hunger-Free Kids Act, aka "Michelle Obama's child nutrition bill." The law, which funded the federal school lunch program, revised the program's nutritional standards -- basically moving more toward fruits, vegetables, whole grains and other generally healthy things and away from cheap awful junk food like frozen pizza and chicken nuggets.

There's big money in school lunch contracts, and a lot of lobbying cash is spent by various food and food product manufacturers to get their scrumptious offerings on Junior's cafeteria menu. As soon as the child nutrition bill was passed, lobbyists from the frozen junk food industry tried to weaken -- or, more realistically, keep weakened -- the regulations surrounding their sodium-rich cheese fat globules from hell.

Thus we had the infamous "pizza is a vegetable" flare-up of 2011, wherein food product lobbies like "the American Frozen Food Institute" worked their magic to maintain pizza's special ability to count toward vegetable servings. A column this week by Michael F. Jacobson and Margo G. Wootan, the executive director and director of nutrition policy at the Center for Science in the Public Interest, respectively, recalls the battle and the shady players behind it.

If you want to know how pizza becomes a vegetable, don’t look to the amount of tomato sauce used.  Follow the money. Much of the pizza sold in schools comes from a privately held Minnesota company called Schwan Food.  In 2011, Schwan was able to leverage its clout in Congress to pass a rider that let pizza basically count as a vegetable in the school lunch program, thanks to its smear of tomato paste.

Now the House is working on its latest agriculture appropriations bill, the draft of which curiously offers waivers for the school nutrition guidelines. On Tuesday an appropriations subcommittee, the Hill reports, "approved language that would require the Agriculture Department to waive requirements to serve fruits, vegetables and low-sodium and low-fat foods for schools that can show their lunch programs are losing money." This led to a big argument between Rep. Rosa DeLauro and the subcommittee chairman, Rep. Robert Aderholt, about what's really going on here: Is this because the schools are losing too much money implementing the requirement, or because junk food makers are lobbying heavily for this plank?

Panel member Rep. Rosa DeLauro (D-Conn.), who voted no on the bill, said the provision was a carve-out to the food industry and argued that 90 percent of schools are successfully implementing the standards.

“Why would Congress, already maligned for labeling pizza a vegetable, and I know something about pizza, now seek to weaken federal child nutrition programs — and through the appropriations process no less — other than to appease the industry,” DeLauro said.

“I am not hearing from industry,” Aderholt shot back. “I don’t know where industry is on this. … I am hearing from lunch ladies I talk to.”

It's really hard to believe that Aderholt isn't hearing "from industry" on this. Perhaps he just doesn't know industry when he sees it?

The main lobby behind the push for the waivers is a group called the School Nutrition Association, "which represents school food administrators and is supported by food service manufacturers." This is the group that would put forth the "lunch ladies" that Aderholt is talking to. In the back end, though, is that support by "food service manufacturers." And whom might that include? A look at donors to the Association's 501(c)(3), the School Nutrition Foundation -- "dedicated to financial aid, education, professional development, and research in school food service" -- shows that "Schwan's Food Service," the same group behind the "pizza is a vegetable" episode, are the foundation's second-biggest donors.

Schwan's is the company behind such frozen pizza brands as Freschetta and Red Baron, tasty little treats that are nevertheless Not Good For You. They are also deeply involved with/the same thing as the "National Frozen Pizza Institute," a subsidiary lobby of the aforementioned "American Frozen Food Institute." (Corporate trade groups and lobbies calling themselves "Institutes" is all the rage these days. See also: the American Beverage Institute or the Employment Policies Institute. The word "Institute" connotes an image of hundreds of scientists mixing chemicals and huddling over test tubes, proclaiming, "Eureka! The results show that sodium and fatty mcfat-fat salt cheese are good for you and any minimum wage hike would bring about Armageddon!" They're just corporate P.R. fronts.) If you're looking for a larf this morning, spend a few minutes perusing the NFPI's website, FrozenPizzaFacts.org. Look at which private company from Minnesota is mentioned in the first two FACTS about frozen pizza:

Pizza has long been a favorite in American homes, school cafeterias and offices.  Frozen pizza offers consumers a quick, affordable and nutritious way to fill up.

Ha, those aren't even facts, they're just advertisements for Schwan's frozen pizza!

We've got to say, it does seem like "industry" is involved in this waiver battle, and to a not-insignificant degree.