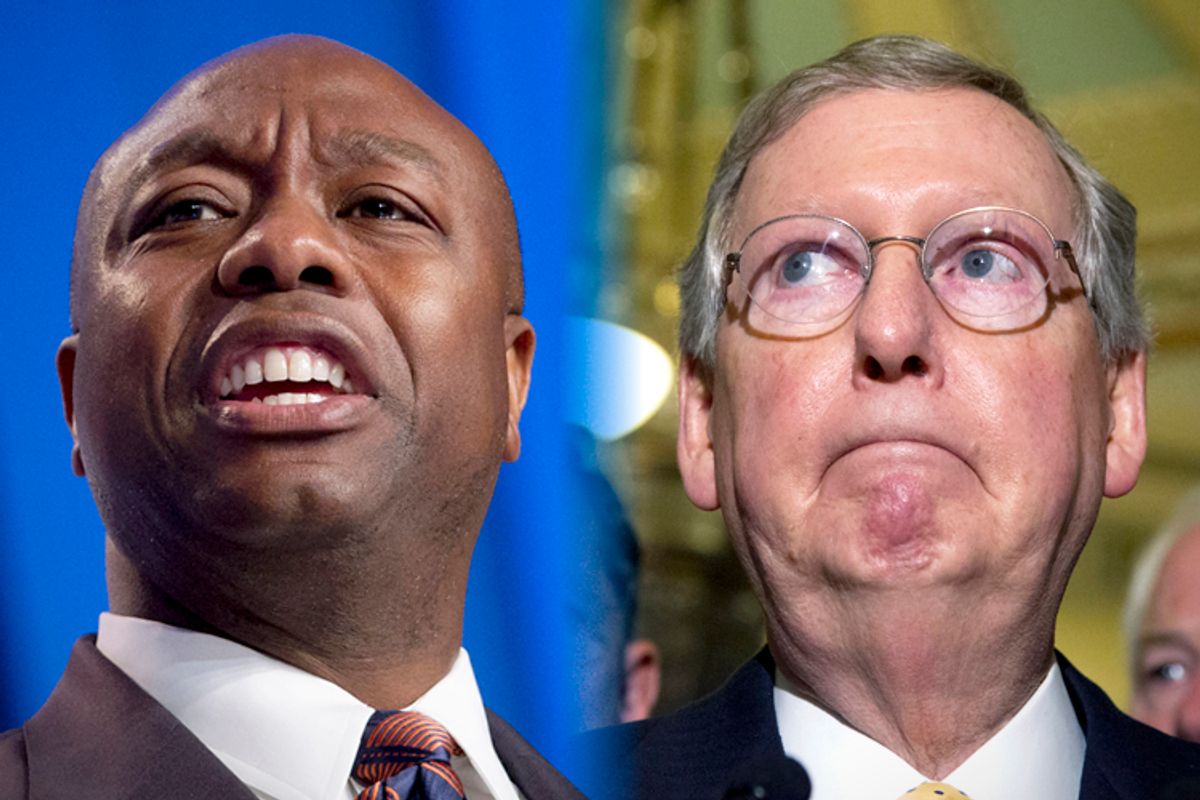 Fresh off his victory over Tea Party challenger Matt Bevin, Senate Minority Leader Mitch McConnell headed to the American Enterprise Institute Thursday to make himself over as a GOP populist. The party, as you’ve heard, has decided it needs “middle-class outreach” – since it’s given up on outreach to women, Latinos, African-Americans and the LGBT community – and thus some intellectuals and politicians have tried to craft “a middle class agenda.”

While the party should continue to stand for the free market and business interests, McConnell said, it had to face facts: “For most Americans whose daily concerns revolve around aging parents, long commutes, shrinking budgets and obscenely high tuition bills, these hymns to entrepreneurialism are as a practical matter largely irrelevant. And the audience for them is probably a lot smaller than we think.”

That, you’ll recall, was the takeaway from Mitt Romney’s 2012 campaign, where the plutocrat’s self-satisfied slogan “You built that!” was meant to mock Obama’s declaring that nobody builds a business entirely alone, but seemed to mock anyone who drew a paycheck, which is most of us.

But what is the tangible help McConnell and his friends are now offering to middle-class families? Very little, it turns out. McConnell had the audacity to present his union-busting National Right to Work Act as a pro-middle class reform, ignoring the way the labor movement actually built the middle class from the 1940s through the 1970s. Oh well.

The AEI event also included Sens. Mike Lee and Tim Scott, along with House Majority Leader Eric Cantor and writers like Ross Douthat, Ramesh Ponnuru and Reihan Salam, who contributed to a collection of essays on the new middle-class agenda called “Room to Grow.” They talked about helping single mothers, tackling student debt and ending corporate cronyism. But they offered very few ideas that would make a difference, and their good ideas are strangled by GOP orthodoxy. Lee wants to develop a package of tax cuts and credits for the middle class, for instance, but it adds $2.4 billion to the deficit so he hasn’t worked out his numbers.

The Utah Tea Party favorite also proposes to help the middle class while cracking down on the poor: Since he believes poverty programs create a “disincentive to work,” he wants to cut them and step up work requirements for those who do get help.  “We don’t want people to have to make that kind of awful choice" between welfare and work, Lee told a reporter, so we'll cut back welfare and make it harder to access. Bless his heart.

Ending corporate cronyism seems like a place the two parties might find common ground, but every time Democrats and a few Republicans put together a proposal for cutting the tax loopholes that make the tax code so unfair, conservatives squash it.

Still, let’s give the folks behind “Room to Grow” credit for trying, again, to buck the prevailing pro-plutocrat direction of their party. In the conservative Washington Free Beacon, Matthew Continetti praised the agenda, but offered a caveat. “I do not doubt for a moment that if the Republican Party adopted Room to Grow as its platform tomorrow, then both the GOP and the country would enjoy a better future,” he wrote. But he remembered a similar reception for Douthat and Salam’s widely praised “Grand New Party: How Republicans Can Win the Working Class and Save The American Dream,” and concluded the GOP “is no closer to embracing the ideas of Salam [and] Douthat…than it was when we celebrated the publication of 'Grand New Party' at the Watergate in 2008.”

Continetti deserves credit for explaining exactly why that is:

So if the GOP can craft an agenda that it can sell to Christian senior men, this middle-class thing is a go. Otherwise, it’s going to have to wait for people with the courage to sacrifice part of that 48 percent to get to 51 percent.