How Disney learned to stop worrying and love copyright infringement

For years, Disney was notoriously heavy-handed in defense of its intellectual property. Then along came "Frozen" 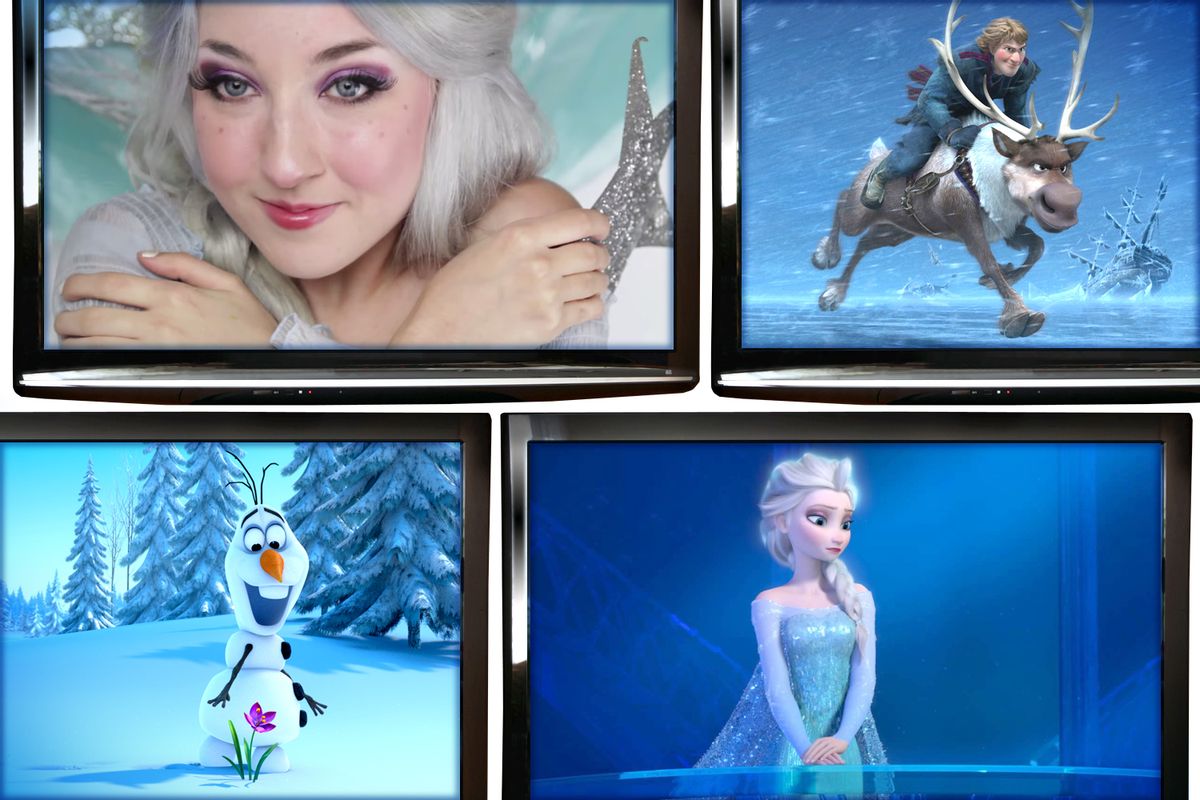 The Monday before the Oscars, Scott Kramer, a digital content producer based in Los Angeles, called his close friend Joshua Elson, a high school choir teacher, with an idea. For months, both their families had been obsessed with the song "Let It Go" from Disney's animated phenomenon "Frozen." Kramer, mindful of the growing online clamor focused on everything "Frozen," wanted to make a video parodying "Let It Go." It would be self-consciously "meta" -- a plea from a father who was being driven crazy by the song's ubiquity, begging the world to let "Let It Go" go.

Like the movie and the Oscar-winning song, the video "A Frozen Father ('Let It Go' Dad Parody)" became a huge hit, with almost 1.6 million views to date. Deliciously, it peaks at a moment of high drama that mimics the dramatic importance of the song in the film's plot arc; you will not easily find a more well executed thrust of gleeful irony than the moment when Elson looks straight at the camera and sings, "Let it go, let it go, NO MORE YouTube videos!"

The numbers that define "Frozen's" cultural and financial success beggar description. It is not only the highest-grossing animated film of all time; it has also registered the most Blu-Ray DVD sales and paid digital downloads of any movie ever. The soundtrack to "Frozen" has sold 2.7 million copies. According to the Wall Street Journal, some 60,000 fan-made versions of "Let It Go" have been watched more than 60 million times. The authorized film clip featuring the song has been viewed over 147 million times. A shortage of affiliated merchandise -- even Disney did not anticipate quite how big "Frozen" would get -- has incited Cabbage Patch/BeanieBaby levels of hysteria.

Frozen is a once-in-a-generation phenomenon and there are many reasons for its success, including, but not limited to, its mildly feminist take on the classic princess tale and the obvious influence of Pixar genius John Lasseter on Disney's creative process. But one of the most interesting things about "Frozen" can be glimpsed in the popularity of "A Frozen Father" on YouTube. Disney's expertise in nurturing, co-opting and, most of all, not cracking down on the many ways fans have embraced "Frozen" online is a template for how to thrive in a digital, copy-promiscuous, consumer-empowered environment. Disney, long one of the fiercest and most powerful defenders of strict intellectual property control, has learned how to let copyright go.

Well, at least a little bit.

Kota Wade is a 20-year-old aspiring singer in Los Angeles who epitomizes the new career track for the young creative professional on the make: Don't wait for a gig to come to you -- get yourself a YouTube channel, build up a fan base, and then keep giving those fans what they want.

"It was crazy. Like an overnight change. The movie had been out for a while and then I put up the Elsa makeup tutorial, and people were freaking out! They were like, do this, do that. So I kind of went with it."

Revenue from ads shown on her videos now provides her primary source of income, said Wade. "It's pretty much my full-time job."

It's all happened without anyone from Disney knocking on her door and objecting to her cover versions of copyrighted songs or appropriation of Disney characters. And Wade is hardly alone. There is an entire economy of independent YouTube channels synergistically thriving in concert with Disney's official output. Wade's already got her eyes focused on Disney's upcoming reboot of the Sleeping Beauty fairy tale, "Maleficent." She thinks it will fit her "niche."

Wade says there are no clear rules on what you can or can't do online with Disney content. She's heard stories of videos being taken down, but she believes the company tends to be more "strict" when videos contain actual footage from its productions.

Disney did not respond to my queries as to where they draw the line or how they are engaging with non-authorized use of Disney characters. But there's anecdotal evidence that the company has realized that the same people who are buying soundtracks and merchandise and DVDs are the same people who are making and sharing YouTube videos. Although Disney once viewed YouTube with alarm, the company now seems to realize that fan-created content -- even in cases where that content is generating revenue that is not captured by Disney -- is cross-promotional marketing that money can't buy.

Which is not to say that Disney isn't heavily involved promoting its content on YouTube and everywhere else online. In fact, it can often be difficult to discern what Disney content is created by fans and what is orchestrated by Disney itself. The dividing line is increasingly blurry.

Disney made the clearest possible demonstration of its commitment to the wild and woolly world of online content creation in March when it bought Maker Studios, a prominent production house and network of YouTube channels that regularly channels grassroots creativity into more professionalized output.

In an earnings call after the acquisition, CEO Bob Iger explained the purchase:

Disney CEO Bob Iger offered more insight into how Maker fits into the media giant’s overall plans in a quarterly earnings conference call with investors. Iger said that Maker’s vast reach, with its 55,000 channels generating more than 5.5 billion monthly views, is what caught Disney’s attention. He also emphasized that the video network will actively use Disney IPs. “More and more we’re taking advantage of short-form video and distribution for marketing messages for our moves, our theme parks and our television shows,” he said. “Getting maximum traction from a distribution perspective takes a lot of expertise and a lot of experience, and they’ve got that.”

Left unsaid, however, is the fact that even at Maker, a lot of what gets produced is just one step up from pure amateur production. Maker doesn't control its affiliated channels in the same way Disney controls the programming on its cable network. All that short-form video, whether generated by fans on their own or by Maker-approved producers represents an acknowledgment that every last exploitation of Disney intellectual property can't -- and almost undoubtedly shouldn't -- be micromanaged.

"Disney is one of the more forward-looking companies in knowing how to deal with digital," says Scott Kramer. "What they've recognized is that people do want the real stuff and people will pay for it. All the other stuff is like extra advertising. "

That even includes the postmodern parodies, which manage to advertise the movie even while pretending to complain about its ear-worm success.

It wasn't always this way. When YouTube first emerged, Disney saw it as little more than a vehicle for mass piracy. As recently as two years ago, Disney's online and interactive efforts were widely seen to be floundering. And, of course, despite the proliferation of explicitly unauthorized Disney content on YouTube, Disney certainly still takes copyright seriously. It was a backer of the unsuccessful Stop Online Piracy Act in 2012 and it dramatically flexed its muscles in the 1990s at getting the Copyright Act extended another 20 years, just before Mickey Mouse was about to enter the public domain.

But in 2014, Disney's cagy marketing of "Frozen," loose reins on fan-created content, and purchase of Maker Studios all seem to indicate that the company is figuring it out. And surprise, surprise, in the second financial quarter of 2014 Disney recorded record earnings. Probably all the evidence anyone might need to prove that letting go of your fans is the best business strategy possible.