Is "baby fever" killing my chance to have kids? 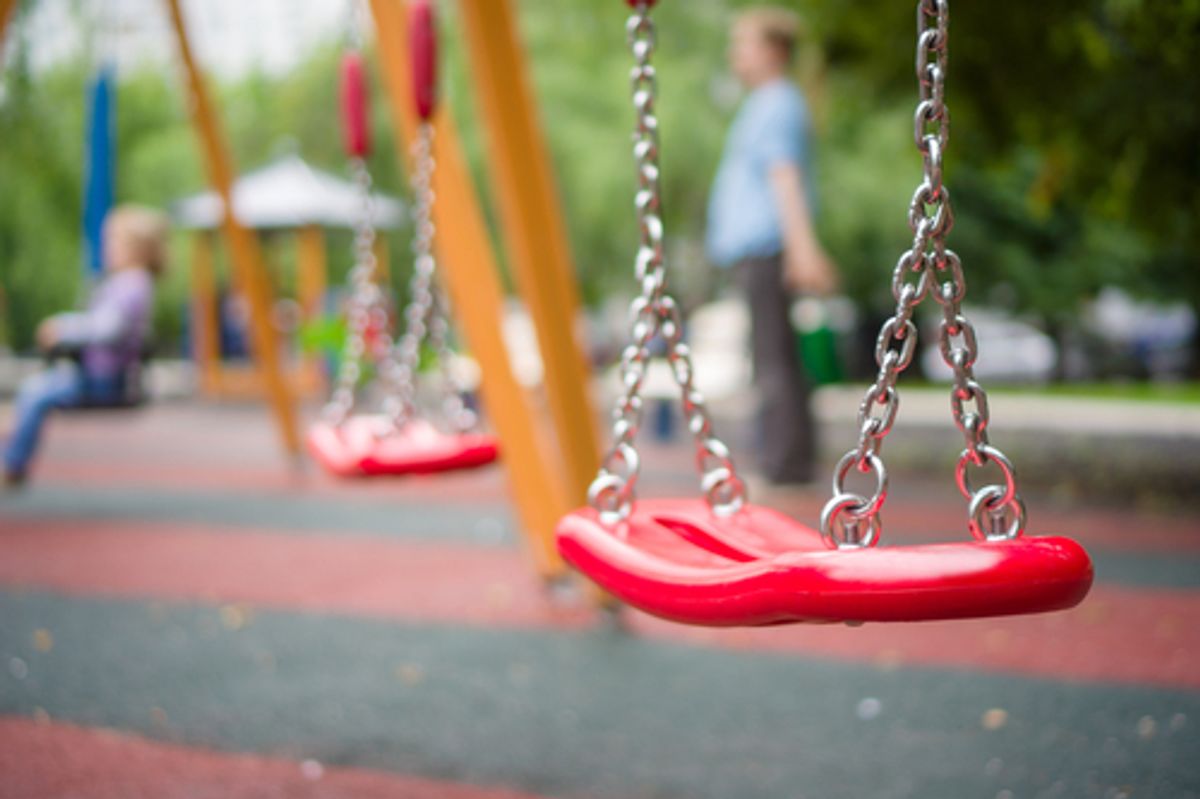 I’ve known I want to be a mom with absolute certainty for over eight years—or at least, with as much certainty as it’s possible to have. We like to call this feeling “baby fever,” and for a while I even toyed with writing a blog of the same name, wanting to document the days turned into weeks turned into years of living without what has come to feel like an essential part of me—the child or children I so urgently want to love and care for. I felt a wave of longing wash over me when I saw my friend’s one-year-old son rush up and hug her with all his might after going down the slide at the playground the other day. I think about what kind of mother I’d be every time I see a kid lumbering to school with their cute backpacks or snugly nestled in a stroller, or even crying their heads off on an airplane—I want that part of it too.

Yet “baby fever,” I’ve come to believe, is about as helpful a term as “mommy wars.” It makes it sound like the desire to become a mom (because I’ve yet to hear a man described as having “baby fever”) is some manic urge, like our uteri are sending Amber Alerts that are scrambling our brains and turning us into infant-crazed maniacs. It reminds me of the hype around Cabbage Patch Kids being dropped out of planes. “Baby fever” does a disservice to those of us who want in on motherhood for the long haul.

Yet we are bombarded on all sides by so many mixed messages about what being a mother means. On the one hand, so many women who know for sure they don’t want to be moms have recounted the pressures placed on them—by friends, family, and strangers—to become one, regardless of their desire. Or rather, it’s assumed that by nature of being a woman, you will have that desire, or grow to have it, even if you have to become a mom first. As Kat Kinsman wrote on CNN, “A married woman who chooses not to have children is highly suspect to some, broken in some fundamental way.” My Facebook feed was littered with other women being similarly accused of missing out on something they want no part of.

More from DAME: "In Praise of Surrogate Mothers"

Then there’s the crowd that is growing increasingly loud about urging those in my situation to rush to have a baby by any means necessary. Whether it’s Tanya Selvaratnam, in her book The Big Lie: Motherhood, Feminism, and the Reality of the Biological Clock, or Princeton Mom Susan Patton, the idea that biology is the main obstacle to motherhood is thrown at us repeatedly. Selvaratnam’s title refers to her belief that women have been sold a bill of goods that they can put their careers first and parenting last, but I’ve found the exact opposite to be the case. Pretty much any time I’ve mentioned wanting to be a mom to a woman who has kids, she’s gotten down to brass tacks: “Have you thought about freezing your eggs? What about adoption? What will you do when you turn __?”

I’ve never encountered anyone who’s blithely assured me I have “plenty of time,” whether at 30 or 38. Both Selvaratnam and Patton approvingly point to statistics showing that the most fertile years start in our teens, but are we really encouraging high school students to be more concerned about plotting their due date than practicing safe sex?

Thankfully, not everyone is buying into the notion that having kids is as simple as leaning in, grabbing a man, any man, and buying a copy of Taking Charge of Your Fertility. The biggest thing I think biological clock alarmists miss is that, unless you want to go to a sperm bank or otherwise become a single mom, it will take a partner to join in the process. It’s easy for Patton to write in The New York Post, “Plan to have your babies young enough to lessen the possible nightmare of infertility treatments or the heartbreak of childlessness,” but there is only so much planning one can do. Once, I wanted to see if there were guys out there as into furthering my goal as I was. I put an ad on Craigslist saying “Knock me up” and was shocked that I got lots of responses. Maybe that should be my fallback plan, right next to hitting up sperm banks.

More from DAME: "The Invisible Pregnancy"

We’re warned to get out there and find someone who’ll knock us up quick, if we’re into guys, but not to look too desperate and scare them away. Patton writes in her book Marry Smart, “Girls who know that they are on their last pint of nubile fuel should go into overdrive to find a husband and start a family.” That’s a lot of pressure for a relationship to bear—and I speak from experience. I’m 38, and looking back, I very much wish I’d had my life together enough to find someone who loved me and the idea of having kids with me earlier, but I didn’t. Last year, I moved in with my boyfriend of one year after only the vaguest of conversations about whether we wanted children. He knew I did, and as we went to look for apartments, I emphasized to him again that was part of my plan in the next few years—though I didn’t say exactly how many were left. To the best of my recollection, he said, “If it’s that important to you, we’ll make it happen.” But now as I feel my opportunity to bear children closing in on me each day, he’s dug deeper into his feelings about it, and isn’t sure, which leaves me in limbo too.

Much as I’m in love, there’s a part of me that wonders if I shouldn’t have settled down a few years back with someone I know would have started the babymaking process with me right away. I remember doing an impossible seeming black and white M.C. Escher jigsaw puzzle with him, both of us getting increasingly frustrated at our lack of progress, when he said, “Our four-year-old will probably be able to solve this in no time.” The comment was so casual, with none of the prefacing I tend to do when talking about having kids, like I’m treading on eggshells (“Maybe, someday, if we wind up having kids…”). It was just assumed that that would be the next logical step, and in that moment, if I could have made that kid magically appear, I would have.

It chills me a little to think that, had I made different choices, I could be the one posting adorable baby photos on Facebook, watching my kid toddle around the park, looking at preschools. Selvaratnam says she would have started trying earlier in her marriage if she’d known how much difficulty she’d face (she wound up having three miscarriages), but I don’t think it’s as simple as that.

More from DAME: "My Late Awakening"

That’s why, when the cultural noise about why we should start thinking about our fertility in our twenties got so loud this year, I was thrilled to read Savvy Auntie founder Melanie Notkin’s book Otherhood: Modern Women Finding a New Kind of Happiness. In some ways, it’s a sad book, because there are so many women in it who, I’m pretty sure, would have made excellent moms, but for various reasons, haven’t gotten that chance so far. But what made it so valuable to me is that it took into account all the other factors, aside from our aging eggs, that go into the decision to have kids or not. As Notkin writes, “Often, a woman’s involuntary childlessness, such as mine, is misinterpreted as having come about by choice. In fact, I’ve always envisioned motherhood as part of the romantic wholeness of marriage and family—and in my mind, it still is inseparable from love. Without one, I haven’t had a chance at the other.” Exactly.

It’s easy in hindsight to think, Well, maybe I should have done X, Y or Z in the name of becoming a mom, yet I knew exactly what I was giving up when I broke off that jigsaw puzzle relationship. It doesn’t feel like I’ve deliberately waited, but looking back, I see that I’ve been trying to get all the worst problems in my life—my debt, my disorganization, my career—in order, so that if I am lucky enough to have kids, they won’t be saddled with quite so many of my fuckups. Maybe that’s utterly wishful thinking, because I know motherhood won’t suddenly turn me into some perfect human specimen, but I want to go into it with as clean a slate as possible. I’m starting to realize that it’s getting close to now or never time and I will simply have to work on my issues as I go, whether I wind up a mom raising a kid with a partner or on my own.

I’m not saying that biology doesn’t matter—of course it does, and I don’t think women should ignore or put off researching their window for fertility and doing their best to accommodate that. The sad reality is that women can’t wait as long as men do to be sure whether or not they want kids. But biology isn’t everything, and simply warning us that our fertile years are waning isn’t actually helping create healthy families; in fact, I’d say it’s adding to women’s stress and fear about this issue. Biology is one part of the equation, but gaining life experience, figuring out who we want to be and who we want for our partners in love and parenting, and what they want, is just as important.