Alleged Santa Barbara shooter: "I’ll take great pleasure in slaughtering all of you" 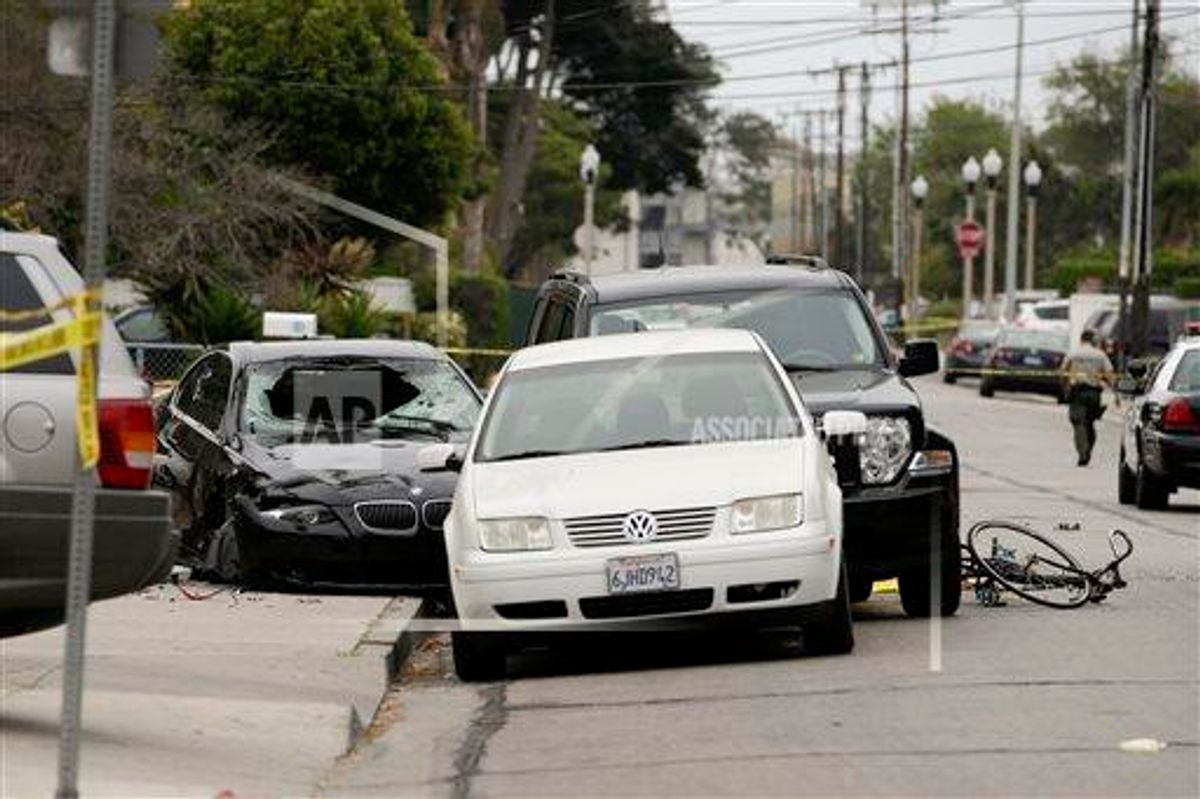 Police tape marks of the scene where a black BMW sedan, left, driven by a drive-by shooter, rests on Saturday, May 24, 2014, in Isla Vista, Calif. The shooter went on a rampage near a Santa Barbara university campus that left seven people dead, including the attacker, and others wounded, authorities said Saturday. (AP Photo/Jae C. Hong)
--

A drive-by shooter went on a nighttime rampage near a Santa Barbara university campus that left seven people dead, including the attacker, and seven others wounded, authorities said Saturday.

The gunman got into two gun battles with deputies Friday night in the beachside community of Isla Vista before crashing his black BMW into a parked car, Santa Barbara County Sheriff Bill Brown said.

Deputies found him dead with a gunshot wound to the head, but it wasn't immediately clear whether he was killed by gunfire or if he committed suicide, he said.

A semi-automatic handgun was recovered from the scene near the University of California, Santa Barbara. Investigators know the gunman's name, but Brown said he couldn't release it pending notification of relatives.

"We're analyzing both written and videotaped evidence that suggests that this atrocity was a premeditated mass murder," Brown said.

A disturbing YouTube video posted that shows a young man describing plans to shoot women appears to be connected to the attack, police said. Officials would not say whether the person in the video was a suspect in the shooting.

In the video, posted Friday, the man sits in a black car and looks at the camera, laughing often, and says he is going to take his revenge against humanity. He describes loneliness and frustration because "girls have never been attracted to me," and says, at age 22, he is still a virgin. The video, which is almost seven minutes long, appears scripted. The identity of the person in the video could not be independently confirmed.

The shootings started around 9:30 p.m. in Isla Vista, a roughly half-square mile community next to UC Santa Barbara's campus and picturesque beachside cliffs.

Alexander Mattera, 23, said his friend Chris Johnson, was walking out of an improv comedy show when he was shot in front of a popular pizza place. He stumbled into a nearby house.

"He walked into these random guys' house bleeding," he said.

Mattera was sitting at a bonfire with friends when at least one gunshot whizzed overhead. The friends ran for cover when they heard the barrage of gunfire.

"We heard so many gunshots, it was unbelievable. I thought they were firecrackers. There had to have been at least like two guns. There were a lot of shots," he said.

A visibly shaken student told the station she was approached by the driver of a black BMW who flashed a handgun and asked "Hey, what's up?" The student, who didn't provide her full name, said she thought he was carrying an airsoft gun and kept walking. She said seconds later, she felt something buzz by her head and quickly realized they were bullets.

Kathrin Schirazi Rad got a call from her 21-year-old son, Adrian Timothy Petersson, who told her in a shaky voice that he had been knocked off his skateboard by a BMW being chased by police about 9 p.m. Friday. He hurt his shoulder, but he went home after being checked by first responders to the scene.

"He was in shock," said Rad, who lives in Sweden. "He saw some plastic bags and said somebody must have died. He couldn't confirm anything, he was pretty shaken up. It was so many things happening at the same time."

The victims' identities were not immediately released. The injured were being treated for gunshot wounds and traumatic injuries, including at least one person who underwent surgery for life-threatening injuries, Brown said.

Isla Vista has a reputation for excessive partying. Last month, an annual spring bash spiraled into violence as young people clashed with police and tossed rocks and bottles. A university police officer and four deputies were injured and 130 people were arrested.

In addition to that Associated Press report above, other outlets are reporting Saturday:

An alleged video confession by the alleged Santa Barbara shooter had emerged -- and it's deeply disturbing viewing.

“I’ll take great pleasure in slaughtering all of you,” the man says on the video. “You will finally see that I am in truth the superior one, that true alpha male.”

The Santa Barbara Independent is reporting that a "crashed vehicle on Del Playa Drive show(s) a license plate number that matches the one on the car featured on Rodger’s Facebook page."

Gawker has found a page of YouTube diaries which express the alleged shooter's loneliness.

And the New York Times is reporting that the Santa Barbara sheriff's department is reviewing a YouTube video and "written and videotaped evidence that suggests that this atrocity was a premeditated mass murder."

Hi, Elliot Rodger here. Well this is my last video. It all has to come to this. Tomorrow is the day of retribution, the day in which I will have my revenge against humanity. Against all of you. For the last eight years of my life, ever since I hit puberty, I’ve been forced to endure an existence of loneliness, rejection and unfulfilled desires. All because girls have never been attracted to me. Girls gave their affection and sex and love to other men, but never to me. I’m 22-years-old and still a virgin. I’ve never even kissed a girl. I’ve been through college, for two and a half years, more than that actually, and I’m still a virgin. It has been very torturous.

College is the time when everyone experiences those things such as sex and fun and pleasure. But in those years I’ve had to rot in loneliness. It’s not fair. You girls have never been attracted to me. I don’t know why you girls aren’t attracted to me. But I will punish you all for it. It’s an injustice, a crime because I don’t know what you don’t see in me. I’m the perfect guy and yet you throw yourselves at all these obnoxious men instead of me, the supreme gentleman.

I will punish all of you for it. [laughs] On the day of retribution, I am going to enter the hottest sorority house of UCSB and I will slaughter every single spoiled, stuck-up blond slut I see inside there. All those girls that I’ve desired so much. They would have all rejected me and looked down upon me as an inferior man if I ever made a sexual advance towards them. While they throw themselves at these obnoxious brutes.

I’ll take great pleasure in slaughtering all of you. You will finally see that I am in truth, the superior one. The true alpha male. [laughs] Yes. After I’ve annihilated every single girl in the sorority house, I’ll take to the streets of Isla Vista and slay every single person I see there. All those popular kids who live such lives of hedonistic pleasure while I’ve had to rot in loneliness for all these years, they’ve all looked down upon me every time I’ve tried to go out and join them. All treated me like a mouse. Well now I will be a god compared to you. You’ll all be animals. You are animals, and I will slaughter you like animals. I’ll be a god exacting my retribution on all those who deserve it. And you do deserve it. Just for the crime of living a better life than me.

All you popular kids. You’ve never accepted me. And now you’ll all pay for it. And girls, all I’ve ever wanted was to love you and to be loved by you. I’ve wanted a girlfriend, I’ve wanted sex, I’ve wanted love, affection, adoration. You think I’m unworthy of it. That’s a crime that can never be forgiven. If I can’t have you, girls, I will destroy you. [laughs] You denied me a happy life. And in turn, I will deny all of you life. [laughs] It’s only fair. I hate all of you. Humanity is a disgusting, wretched, depraved species. If I had it in my power, I would stop at nothing to reduce every single one of you to mountains of skulls and rivers of blood and rightfully so.

You deserve to be annihilated. And I will give that to you. You never showed me any mercy, and show I will show you none. [laughs] You forced me to suffer all my life, and now I’ll make you all suffer. I’ve waited a long time for this. I’ll give you exactly what you deserve. All of you. All you girls who rejected me and looked down upon me, and, you know, treated me like scum while you gave yourselves to other men. And all you men, for living a better life than me. All of you sexually-active men. I hate you. I hate all of you and I can’t wait to give you exactly what you deserve. Utter annihilation. [laughs]