From living concrete to a lump of sky, the secret marvels of what human beings make 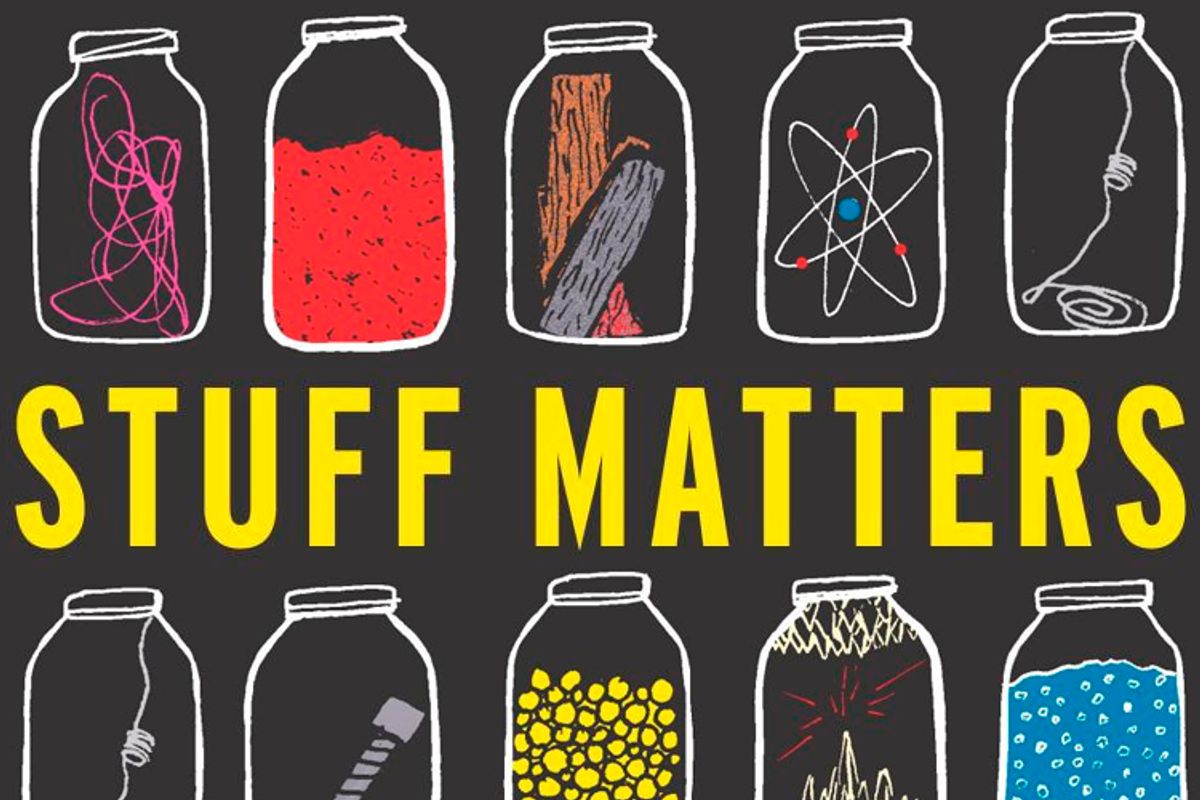 There's a famous scene in the 1967 film "The Graduate," in which a middle-aged businessman informs the movie's title character, Benjamin Braddock, that he has "just one word" of advice for the presumably enterprising young man: "Plastics." The scene is meant to convey the vapidity of the adult world that Benjamin is expected to join; what could be more degraded and fake than plastic? But the joke is on Benjamin and the film's creators, because not only are the businessman and his cohort plastic, but so is everyone else in the film, including Benjamin and the drippy young woman he runs off with in the end. All of them exist thanks to celluloid. If not for plastic, there would be no "The Graduate."

Along with plastic, here are some of the other things Mark Miodownik's new book, "Stuff Matters: Exploring the Marvelous Materials That Shape Our Man-made World," celebrates: concrete, glass, porcelain, paper, graphite (aka pencil lead) and stainless steel. But if all this reminds you overmuch of another tedious shopping expedition to Staples, wait a sec. Before you click away to some story about a feckless celebrity's Twitter gaffes, know also that "Stuff Matters" makes the seemingly banal objects of our everyday lives into an endless source of wonder, dreams and possibility. Miodownik may start out with bricks and coffee mugs, but by the time he's done, he's thrilled his readers with invisibility cloaks, bionic human limbs, exploding billiard balls and an elevator to outer space.

Miodownik is a materials scientist and a professor of materials and society at University College of London, which seems a rather unfair hoarding of talents, since he also writes a splendid sentence and communicates the often recondite basics of his discipline with enviable ease. "Gold is the full-fat cream of the metal world," he tosses off at one point. Indeed it is. His description of the small delight of a brown paper bag -- "it comes out first in its flat-pack condition, but then its bottom is pushed out and it makes that glorious sound of thunder as the concertinaed paper sides are deployed into their upright positions" -- is positively Updikean. In the course of this wide-ranging little book, Miodownik becomes a sort of Bill Buford of molecules.

"Stuff Matters" also serves as an introduction to the fringes and furtherest reaches of the material world, including its man-made cutting edges. There are probably other books where you can learn that, thanks to the discoveries of deep-sea explorers, scientists have devised a form of living, self-healing concrete containing tiny organisms that excrete calcite, a mineral constituent of concrete, whenever they are exposed to the outside environment. (Good for maintaining inaccessible structures like bridges and the linings of nuclear reactors.) They've also devised a "textile version of concrete" that can be rolled out, arranged and finally dampened to make it assume a rigid form. (Good for slapping up quick shelters in the aftermath of a disaster.) Some new forms of concrete can even be taught to purify air.

Still other writers may tell you how samurai swords came to be "ten times stronger and sharper than other swords" or what a raw cocoa bean tastes like or that the pure glass at the center of a decorative scarab found on the mummy of King Tut was incredibly rare in the ancient world and produced by lightning or that the biggest diamond known to humanity is a planet in the constellation of Serpens Cauda and five times the size of Earth.

You can no doubt find other (if not more bewitching) descriptions of an outlandish substance called aerogel, invented nearly a century ago but still something not many people get the chance to see in person, let alone touch. "There is no weight to it that you can perceive," Miodownik writes after holding a block, "and its edges fade away so imperceptibly that it is impossible to see where the material stops and the air begins. Add to this its ghostly blue color and it really is like holding a piece of sky in your hand." However, I challenge you to find all these and many additional wonders between the covers of a single book. Scientists growing a human windpipe in a laboratory! Graphene, "the thinnest, strongest, stiffest material in the world," and so conducive of electricity that it may in time be used to bring the touch-sensitivity of an iPhone screen to "whole objects and even buildings"!

Nevertheless, "Stuff Matters" is much more than just a catalog of futuristic marvels; it also calls commonplace materials up onto the stage to take a much-deserved bow. Miodownik's chapter on paper is told through a series of images: The letter his grandfather wrote to the British Home Office in 1939, seeking permission to bring Miodownik's father out of Belgium; the photograph of his father, age 9, on the German identification card he used to emigrate; the books in Miodownik's home; the thermal paper receipt from a trip he made to a grocery store to feed the cravings of his pregnant wife; an envelope on the back of which he calculated the number of atoms in the Earth as a tribute to all the famous envelopes on which scientists like Enrico Fermi jotted down their brainstorms. There's even a mini-paean to wrapping paper ("strong enough to protect the present when it is sent through the mail, but so weak that even a baby can rip it open") and another to love letters ("to hold in your hands the very material that your beloved touched and to breathe in their sweetness from the paper is truly the stuff of love.")

Glass in particular is a material whose importance we often forget, perhaps because it's most effective when it's least visible. Without glass we would have no lenses -- no eyeglasses or microscopes or telescopes. (It was the lack of these that in part caused Chinese technology to fall behind the West.) We wouldn't have lager because before see-through tableware people didn't care what beer looked like. Furthermore, "glass equipment is the workhorse of the chemist’s world -- so much so that every professional chemical lab has a glass blower in residence" -- to make test tubes and beakers so the scientists can see what they're doing. Despite the many other scientific marvels that Miodownik describes or predicts, we still aren't anywhere close to producing a plastic that has glass' ability to withstand scratching, which is why we had to invent a kind of glass that shatters safely, to use for windshields.

Miodownik can speak authoritatively to the importance of safety glass, having once gone head-first into a windshield in Spain. He also suffered an unfortunate encounter with stainless steel (stabbed by a razor-wielding mugger as a boy on the London Underground) and a welcome one with titanium. Screws made of the latter were used to repair the accident-prone Miodownik's blown knee. Each of these experiences gets him thinking about why certain substances have certain properties. The answers often involve hand-drawn sketches of crystals and atoms, but as popular science goes, "Stuff Matters" is eminently vivid and accessible; it always comes back to objects you can hold in your hand or touch.

The linking motif of "Stuff Matters" is a photo of the author himself, sitting at a cafe table in a rooftop garden with a book and cup of tea. Each of the materials he explores (including chocolate, which gets a whole chapter) is evident in the scene. That's Miodownik's way of pointing out how intimate our relationship with all of this stuff is, how much it shapes us even as we shape it, or take it for granted. "Materials are a reflection of who we are, a multi-scale expression of our human needs and desires," he writes, and by the time he's done, you're as amazed by (and sometimes as in love with) all this stuff as he is.