A new divorcee, her boyfriend, and a couple of tiara-wearing swingers walk into a bar... 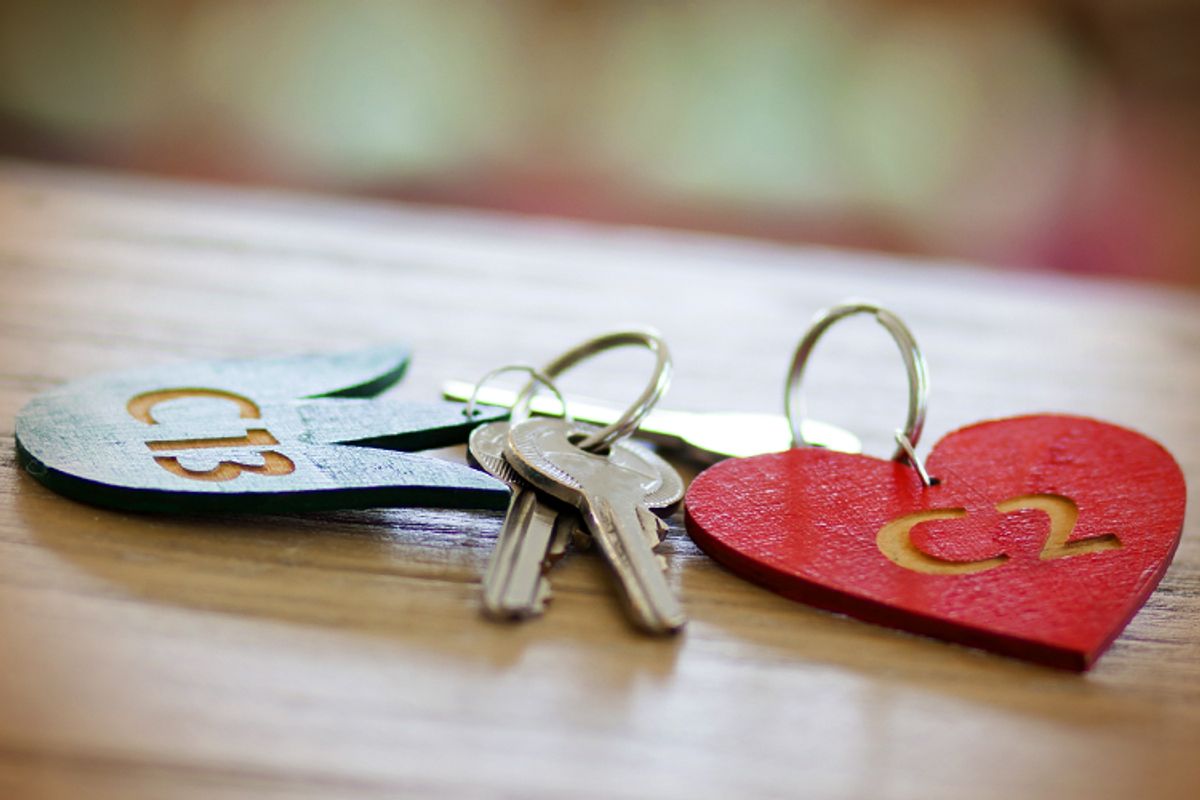 Facebook
Twitter
Reddit
Email
view in app
There was snow, and the restaurant was only a few yards away from the hotel, so I wore my high-heeled boots and leaned on my new boyfriend for support. It was fun having a new boyfriend because I am past the age of “boyfriend,” thought I’d never again have a boyfriend, as I was separated, with a kid and gray hair. I am the kind of woman I would have been grossed out by only a few short years ago, the kind of woman I used to write about, swore I would never be.

The restaurant was cozy, and my boyfriend and I needed a drink. We had been driving for hours from Brooklyn to Upstate in the kind of snowstorm no one drives in. It would have been pretty if it weren’t so scary, only us on the road, the white flakes angrily hitting the windshield. It might have been romantic if we weren’t having the “how-many-people-have-you-slept-with?” talk.

There was quiet and snow for a long time in that car. My new boyfriend’s silence was sadness, the thick thought of me with another man. It was in the car between us. We had figured out, on that long, slow drive, that we had slept with the same number of people, but that didn’t seem to make him feel better.

There was a bar at the restaurant, so we sat there first and ordered cocktails. The place was not crowded: The only people sitting at the bar were an attractive, small woman with long black hair and an older man.

I am a starer. I have been told this on occasion (especially by my ex-husband, who reprimanded me in restaurants). My new boyfriend didn’t seem to notice me looking over at the woman’s flared jeans and purple shirt. The man was dressed much “straighter,” wearing khaki pants and a blue button-down.

“What’s up with them?” I whispered to my new boyfriend. It was time to focus on other people, stop talking about our old lovers. Sadly, the thought of them had already blossomed in both of our minds.

My boyfriend shrugged, then stared with me.

When the man turned to face us on his stool, I could see that he was handsome. He looked like someone’s father, virile, with blue eyes. Like the dad that would have driven me home from baby sitting in his Porsche, too fast. His gray hair was combed to the side.

“First night here?” the man asked us. The woman leaned over.

I am more social than my boyfriend. I like people a lot. I introduced us, and began asking questions quickly. They were from Connecticut. They weren’t married. He had kids with an ex. He was some kind of salesman. He wasn’t that much older than her (I couldn’t tell if she looked really young or he looked really old) and they had been boyfriend/girlfriend for eight years.

She was an accountant with a Brooklyn accent. Jewish, I found out quickly, which was a surprise. I pride myself on being able to spot a nose job and a Jew. I had picked her for Italian.

Soon the men started talking, and Jess moved to the stool next to me. We ordered more drinks. She took out an e-cig and began to tell me about her laser hair removal. “Oh, she’s telling you about that,” Steve broke in.

I had my own hair follies, so we bonded.

“You guys have the same hair,” Steve said.

Being in love after being married is adolescence all over again. No one tells you this. In my case, things were easier after I moved out. I also became a parent who had some weekends alone. “Get divorced!” I told everyone who said they were jealous of my new free time, my second romance. The weird looks I got back didn’t bother me then.

Jess wanted a real cigarette so we all put on our jackets and went outside. The snow had stopped, and now there was just the cold night and the soft ground. It was so nice how close we were to our hotel, and I began to look forward to being alone with my boyfriend. But Jess said they had some champagne in their room. Why didn’t we join them?

There is a story by John Updike called "Pygmalion," in which a man’s wife does imitations of a certain woman when they get home after they see her at parties. Eventually the man leaves the wife for the woman she had made fun of, but misses his wife’s impressions of his new lover, and tries to get his new lover to make fun of other women like his wife used to do.

I often think of this story -- the intimacy of a couple -- the “us against them” feeling that makes two people like one. There are two types of women, and I like to think that I am the first kind, doing impressions in our bedroom for my husband while changing out of my tights, making him laugh from where he waits for me in the bed. The other woman, the one I had made fun of, might get him eventually. But there is something that he loved about me that he will miss.

“Yours is just like ours,” they said; we still hand’t even checked in, but our numbered door was only a few down on the bungalow row.

I sat on their bed because there was no place else to sit. On the wall was a large painting of a large cloud.

“Surprise!” Jess said suddenly. I turned to see her wearing a shiny silver tiara. It looked like the kind you see at bachelorette parties on TV.

“You always need a tiara,” she said.

“She brings it everywhere,” said Steve.

It was a little funny, but something about it seemed serious, too. Steve popped the champagne and I looked at my new boyfriend, trying the tiara on myself.

I looked in the mirror. Then Jess stood beside me and we put on makeup together and told each other how young we each looked. By now we were drunk and she was telling me how nice my new boyfriend was, and I said so was hers, and she said, He’s nice, right? He is. He’s a good guy. Really. Totally sweet.

She took the tiara from me and placed it back on her head. Even with her high heels on, I was a foot taller.

It was freezing but she insisted on smoking so we sat in what looked like a gazebo in the snow behind the hotel with the champagne. There were night safety lights pointing toward the rooms, and shadows, but we could still see each other's faces. I had not spoken to my new boyfriend for what felt like hours.

My new boyfriend and Steve sat on the benches and Jess and I stood. I was drunk, and began to talk about getting my daughter into a good public school. I don’t know why. I was on vacation.

“That’s not in my world,” she said, interrupting me between P.S. this and P.S that.

I figured it was the reason she didn’t want to get married.

“I have nothing to say,” she said.

I felt stupid, so I stepped closer to my new boyfriend and sat on the edge of the bench.

His arm around me felt good, and I tried to forget about how embarrassed I was for bringing up kid stuff. Jess’ tiara glittered as she looked out at the sky, blowing smoke into the dark over the snow.

Steve looked at us.

“You’re a good-looking couple,” he said.

It was nice to hear that. I had no idea if it was true, and was actually worried about it. I didn’t want to look like the kind of couple you couldn’t imagine having sex.

I don’t think that men feel the same way when they hear this that women do. A compliment like that -- so direct, so blunt -- might hold me over for months, years. My boyfriend didn’t even blush.

“If these girls weren’t here right now,” Steve said, “I’d be kissing your face off.”

My new boyfriend squeezed my arm and I looked down so I didn’t laugh. I could feel my
boyfriend feel the same thing.

Jess flicked her cigarette and slurred. “I’m tired. Let’s go.” She was suddenly wobbly-
drunk. Much more than I was. She was so petite.

We shook hands at our hotel room door and I hugged Jess. We said maybe we’d see them in the morning at the complimentary breakfast. Maybe we could get a drink tomorrow night.

In our room, I fell onto the bed, exhausted. My new boyfriend lay down next to me and we both laughed.

“I ruined our chance to be swingers,” I said.

“I started talking to her about public schools,” I said.

“I don’t want to be a swinger,” he said and kissed me.

I looked forward to doing an impression for him as soon as I got my hands on a tiara. I had a hard time imagining Jess, standing on her tiptoes at the edge of their hotel bed, gesturing with her hands (like I’ve been told I do) and talking about being a mom. We had had just a glimpse, just as they had, and I would never know which kind of woman she was.