"Mad Men" finale recap: "The moon belongs to everyone" 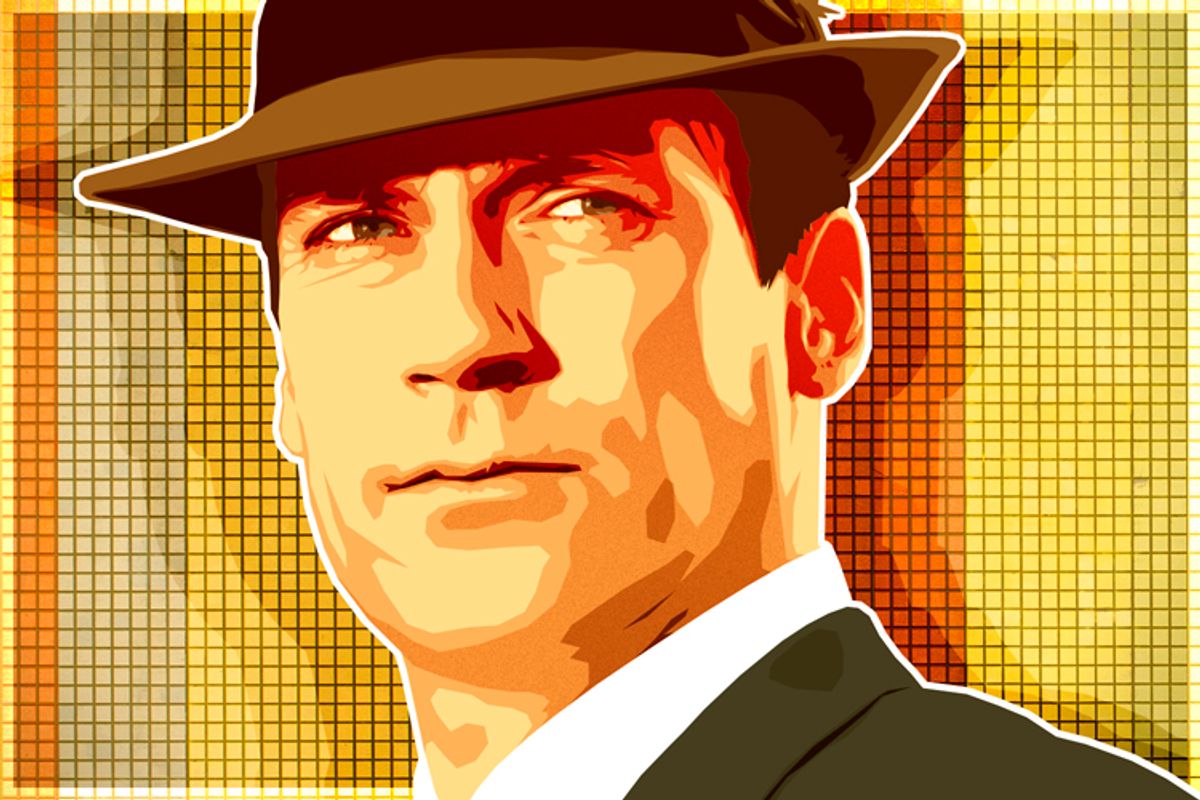 Don Draper has always embodied the strengths and weaknesses of the American hero. He is macho and confident, flashy and unapologetic, and he never compromises. But he's also rigid and arrogant, reckless and hurtful, and he refuses to adjust to changing circumstances. Don Draper has never really believed in small moments of grace. There is just winning and losing, with nothing in between.

We have come to expect big gestures of showy, misguided heroism from Don. In some of the most gripping scenes of "Mad Men," Don swaggers into some posh conference room and delivers a self-assured, moving pitch that brings the house down (and saves the company!). This kind of gallant role-playing extends to his personal life. Instead of facing himself and his problems, he plays the suave romantic, trying to run away with Rachel Menken, proposing to Megan, etc. But these acts of escapism tend to backfire, leading to a nihilistic, boozy downward spiral.

For the first time on Sunday night's finale, Don faced personal ruin but he didn't either fall to pieces or slide into the role of macho American hero. Don suddenly seemed to realize that his choices weren't limited to winning (with victory cries and fireworks and applause all around) or losing (with tears and swigged whiskey and socking people in the jaw in a blind rage). Don saw that he could simply show up, be honest, demonstrate a little restraint, and try hard to support the people who mattered to him. Yeah, I know. Who is this guy?

At the start of "Waterloo," Don isn't the only character whose chosen illusions are going up in smoke. In an inverse of Neil Armstrong's heroism on TV, Ted Chaough turns off the plane's engine while flying with some clients from Sunkist, panicking them and drawing Pete's ire. "I don't want to die," Ted explains to Jim. "I just don't want to do this anymore. Advertising. I want to do something else, somewhere else." Ted doesn't care about winning anymore, but he's also tired of feeling like a loser. He assumes that advertising is the source of his troubles, but maybe he's still mourning the loss of Peggy. Instead of trying to understand himself, though, he's reversing his Season 6 role as the good version of Don Draper and is, instead, conjuring Don's nihilistic, boozy nose-dives of yore.

Lou is also enraged that his career is stalling out. Instead of following his big dreams of creating a cartoon, he's spent ten years "building a tobacco resume" as he puts it, to Jim "and one meeting turned me into a joke." He adds, "I'm gonna crawl out of this place with nothing left to show." Jim, though, represents the cold, robotic pragmatism of the modern workplace, and his response sounds like a line straight out of Lou's cartoons: "We don't owe you anything! You're a hired hand. Now get back to work!"

Burt Cooper has certainly been known to show a similar strain of heartless pragmatism. This pragmatism has sometimes worked in Don's favor in the past, like when he discovered Don's true identity but merely shrugged it off. He takes a similar stance here, backing his team but passively assuming Don is doomed. Little sock-footed Cooper has always been a bundle of oddities and contradictions, though. He embraces Eastern philosophies and believes in balance, yet he reacts to some changes at the office like a reticent dinosaur. He seems like a lonely, racist old man half the time, but there he is, watching the moon landing right next to his black maid (his version of family!). Among the Lous and the Teds of SC&P, Cooper seems uniquely qualified to live in the moment, seize the day, and all of those other hard-to-achieve goals of 1969. His last words, in reaction to Neil Armstrong's famous "one small step" line? "Bravo!"

Roger quotes Irving Berlin's lyrics to Cooper when Cooper appears unruffled by Jim Cutler's attempts to oust Don, but Roger, Lou and Ted are the ones losing their religion. If trouble's just a bubble and the Buddhists have it right, then their whole way of life is an illusion. They've sweated over work for years, but work will never save them from themselves.

Speaking of losing faith, when Roger hears that Burt Cooper died, it's clear that it's a much bigger loss than his own mother's death. He goes immediately to the office, the way the mourning go home to be with their family. Joan, who's the closest thing to family that Roger has left, hugs him. Then Jim Cutler moves in for the kill, already strategizing how to get rid of Don given these new variables. "Is this what would happen if I died?" Roger asks, wondering if his entire life and career could be swept aside just as easily.

For a ruthless pragmatist and man of the future, though, Jim Cutler is oddly fixated on Don – and his notions of Don are badly in need of an update.  "I'm deeply unimpressed, Don. You're just a bully and a drunk. A football player in a suit," he tells him when Don confronts him about his efforts to push him out of the firm. Then he aims below the belt. "The most eloquent I ever heard you was when you were blubbering like a little girl about your impoverished childhood." The old Don – heroic, flashy, win or lose Don -- would've knocked Jim's lights out. But the new Don isn't a football player in a suit at all. He bites his tongue and walks away.

Alternative forms of masculine self-expression are on display elsewhere, too. When a handsome handyman starts flirting with Peggy without any trace of deviousness or swagger, she suddenly sees the appeal of a regular guy who appreciates her and isn't too old or too married or too named-after-waterfowl. She also sees the appeal of having an annoying kid around, asking you for things when you're busy. The illusion that her work life must obliterate her personal life is shattered in one glorious scene. Peggy might just have everything she wants one day! (Sniff.) And how about Sally, choosing an awkward astronomer over a future football player in a suit? What could be more gratifying than seeing these two smart women ditching the American hero for something a little more flexible and magical?

How about watching Megan refuse to fall prey to empty heroism once again? When Don entertains plans of moving to Los Angeles, fleeing from trouble to be with her, old-Don-style, Megan isn't biting. "Aren't you tired of fighting?" she asks him, referring to his job but clearly calling to mind their own fractured marriage. Surprisingly, instead of putting up a fight or weeping or valiantly asking for another chance, instead of throwing accusations around and slamming down the phone, Don quietly agrees. This is easily the most mature break-up Don's ever had. He doesn't pretend he wants to be with Megan forever and ever, and he doesn't blame her for his lack of feelings, either. "I'll always take care of you," he tells her. This is what he's really wanted all along, after all – a wife he could take care of from afar, like Betty and Anna. "I'll be fine," Megan replies, and we know she will. She never really needed him. She tried to play the role of adoring wife but it didn't fit. Don and Megan always matched on the surface. They were both beautiful fakes, great at appearing at home and at ease and in love. But they were never good at actually showing each other their true desires and flaws.

With his job on the line and his marriage kaput, the old Don would've flown to Burger Chef HQ, gotten drunk the night before his pitch meeting, and seduced someone – Peggy! Pete! The bartender at the hotel! And then he would've peeled himself off the floor in the morning and thrown himself into his big pitch. But instead of playing the role of the courageous hero, Don responds in a brand new way: with authenticity, restraint and generosity. He tells Peggy she has to give the Burger Chef pitch, that way she'll still get the account once he's fired. Yes, that's right. New Don doesn't cajole and woo and use his fake-macho charms, or play make-believe or bomb the Burger Chef presentation just to spite SC&P. He passes the ball and lets Peggy play the hero. If the end of Season 6 was the beginning of Don attempting a new approach – honesty – then at the end of the first half of Season 7, Don has mastered this new, more genuine way of living.

Will the overall narrative arc of "Mad Men" really be about redemption and evolution? Because Don Draper's recent past would seem to indicate as much. First he hit rock bottom. Then he turned over a new leaf and basically screwed everything up and alienated everyone in the process. And then, finally? He learned restraint and balance.

It's interesting that Burt Cooper, with all of his flaws, would end up serving as a strange kind of role model to Don at this late date. Cooper was old-fashioned on the one hand, with all of the negative traits therein. But he was also a model of restraint and generosity, perhaps qualities that stemmed, in part, from his old-fashioned values. (Similarly, Don may have a retro interest in caring for a wife, but those caretaker qualities also make him a good mentor and father-figure to Peggy.) Cooper's rose-colored glasses might've looked repugnant to Roger in their last scene together, but by the end of the episode, his outlook started to look to Don like enlightenment.

Because, as Don explains to Ted, there is no magic that lies just out of our reach. Happiness does not depend on some perfect elsewhere. Happiness can't be found in money, or booze, or women, or power. Magic doesn't come from showing off or scheming or getting ahead or flying clients in planes or making out with cynical, sexy young dudes or building a tobacco resume for ten years.

There is no escape from the mundane, but in fact, magic comes from the mundane. Magic comes from working very hard on tags (Don) or giving a lonely kid a popsicle and a hug (Peggy), or being with the people you love (Everyone watching the moon landing together), or seeing your understudy nail her client presentation (Don). Magic arises from the small things you do for other people, and from the small moments you experience all by yourself.

When Burt Cooper dances around the office in his socks, singing these words, he conjures not only those moments when the characters on the show are watching the moon landing together, witnessing magic and feeling it in their connections to each other, but he also reminds Don that all of the magic that the world has to offer is his. Don doesn't need a job or a wife or a moment of glory. He can have "nothing left to show" and yet everything will be alright. There is not just winning and losing with nothing in between. Magic lives in these small moments of grace.

This magic is yours, Cooper seems to tell Don, with his sock-footed soft-shoe dance. This magic is sometimes flawed and awkward and foolish-looking. It's clichéd and sentimental. It's sad and beautiful and it's over in a flash. Take it!