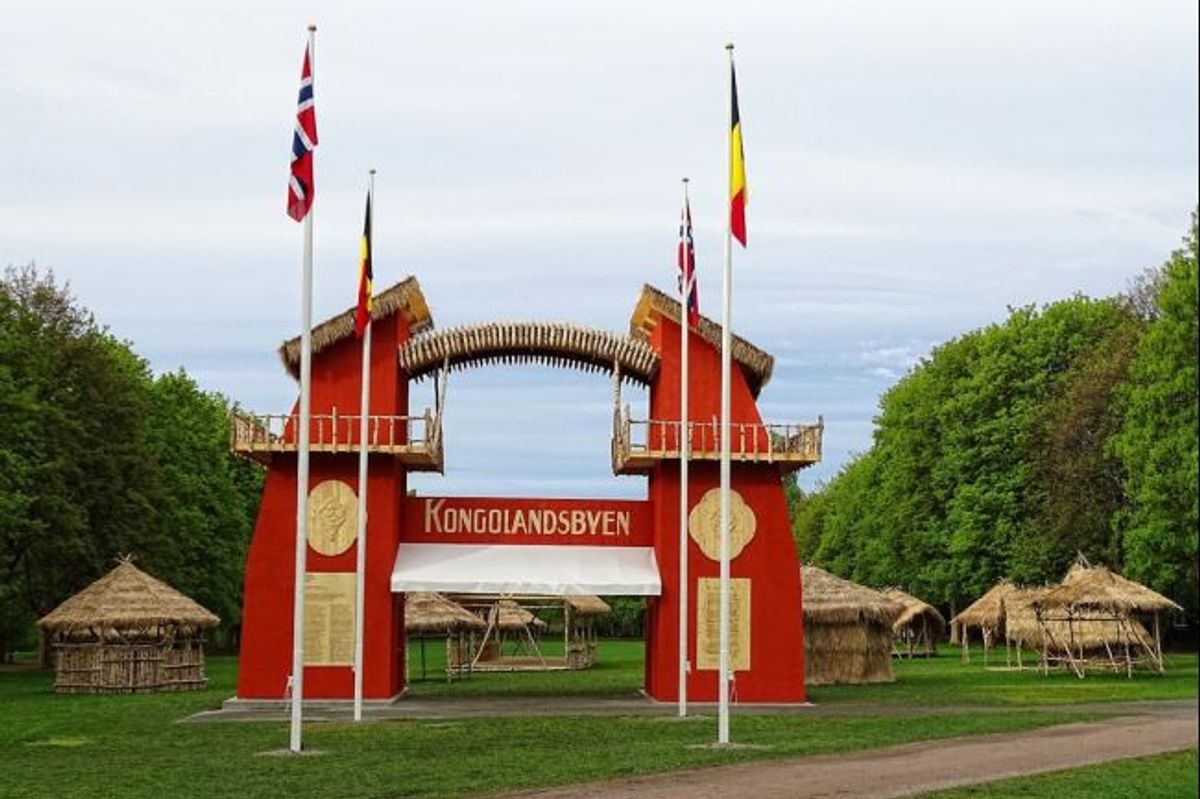 Two artists have recreated a “human zoo” in Oslo, just in time for the 200th anniversary of Norway’s constitution. The project is modeled after an actual historical event — a really, really racist one — and not surprisingly, it’s generated a lot of controversy.

The “Congo Village,” or Kongoslandsbyen, was a fake tribal village built in Frogner Park for the 1914 Oslo World Fair. Visitors could pay to gawk at 80 African men, women and children —apparently Congolese — living in thatched huts, wearing traditional garments and doing “indigenous” things.

In just five months it attracted 1.4 million visitors, or roughly half the population of Norway. A newspaper at the time described it as “exceedingly funny” while another enthused, “it’s wonderful that we are white!”

Today a “human zoo” is nearly unthinkable. Which is exactly why Norwegian-Sudanese artist Mohamed Ali Fadlabi and Swedish-Canadian artist Lars Cuznor decided to rebuild one. To their surprise, very few Norwegians seemed to know about this aspect of Norway’s history.

Cuznor and Fadlabi felt that rebuilding the Congo Village was a way to spark discussion about colonialism, racism and equality in Norway. They secured co-funding from the Norwegian government and recruited international volunteers (of all races) to perform in the fake village.

The resulting display, called “European Attraction Limited,” is meant to challenge Nordic beliefs of moral superiority by confronting visitors with evidence of Norway’s racist past.

“Norwegians have been propagating this self-image of a post-racial society and it's been internalized that it's a good, tolerant society,” Cuznor told Reuters. “It's great branding and it’s self-perpetuating but it's a false image.”

But not everyone’s a fan. As Ugandan academic Bwesigye bwa Mwesigire wrote for The Guardian, “human zoos” were common in Belgium, Germany, France and the United States and depicted Africans (and other non-western peoples) as “uncivilised, primitive and animistic.” This helped justify colonial policies while providing Europeans with crude entertainment.

Bwa Mwesigire adds, “We are not in a post-racial world. Fadlabi and Cuzner can’t exonerate themselves because they mean well. Indeed, if they are serious about creating discussions of racism they ought to think deeper about the likelihood that their project may entrench the same prejudices they claim to fight.”

And Muauke B. Munfocol, a DRC-born Norwegian, questions the decision of the Norwegian government to sponsor a human zoo, rather than put its money toward more constructive forms of dialogue.

But many see Fadlabi and Cuzner’s project as relevant to contemporary racism as well. Will Bradley, director of Kunsthall Oslo, states “it has the potential to once again address the same, unresolved and still modern questions of the political and economic rights of all people, including, but not limited to, those colonized and oppressed by the European adventures in Africa."

Both artists claim they’ve received threats from neo-Nazi and anti-racism organizations alike. “When that happens, we know that there is much truth in the project,” says Victor Mutelekesha, a Norwegian-Zambian artist.

You can read more about European Attraction Unlimited, which opened May 15, as well as the original Congo Land, here.