Rebecca Solnit on Elliot Rodger: "He fits into a culture of rage," "a culture that considers women tools and playthings and property"

The author of "Men Explain Things to Me" talks about the Isla Vista tragedy, and how it "changed the conversation" 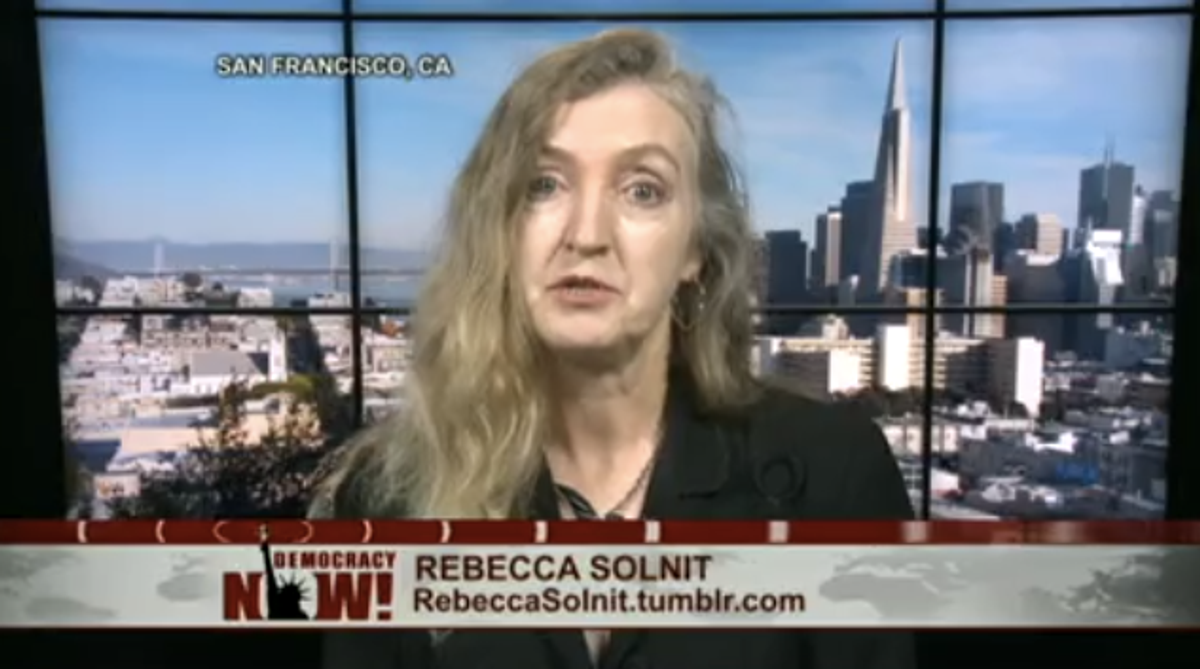 Like many people in the country, I spent most of the weekend struggling to understand the patterns of violence -- both literal and cultural -- that led to the murder of six women and men in Isla Vista, California. While taking in each new piece of devastating news about the tragedy, I found myself reading Rebecca Solnit's "Men Explain Things to Me," almost as a coping strategy. It's a book that explores misogyny and the other cultural forces that could produce tragedies like what happened in Isla Vista, and what we mean when we say "toxic masculinity."

Her interview on "Democracy Now" is worth your time. In it, Solnit discusses #YesAllWomen -- the hashtag that emerged in the wake of the tragedy -- and why we must discuss the violence allegedly committed by Elliot Rodger in the context of cultural misogyny, unchecked male entitlement and a dangerous, loathing masculinity that claims both women and men as its victims.

An excerpt from the interview:

One of the things that was fascinating was the battle of the story. There was such a mainstream desire to say, "Oh, this was aberrant. Oh, he was mentally ill. This has nothing to do with us. This raises no big questions." And to see feminists and allies speak out and say, "No, this is about misogyny, this is about entitlement," was really extraordinary. The term "sexual entitlement," which I had heard before, but not widespread, suddenly began to be used everywhere. And it feels like it really changed the conversation, because so many people insisted on it, so many people got it—this sense that this guy was owed something by women and was furious at them for not giving it to him and that he had the right to exact revenge and all kinds of, you know, what our government calls "collateral damage" on the people around him because his needs weren’t being met.