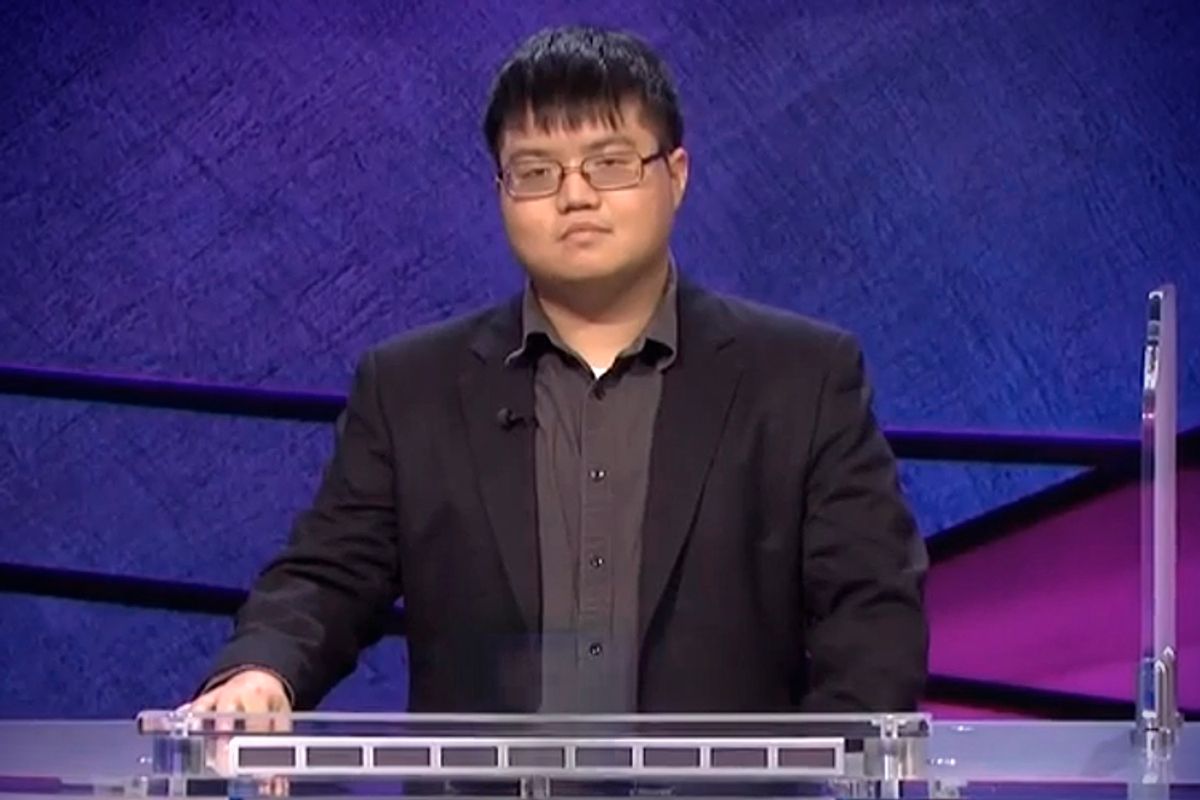 Rarely are a mass murderer's motives as clearly stated as Elliot Rodger's were when he killed six people and injured several others last weekend: He wanted to punish women for not having sex with him, which he felt entitled to. Yes, he was mentally ill, but the misogyny that his illness amplified is one that's all too common in our society.

Even though there's been great dialogue with #YesAllWomen, there are communities of people who don't understand how this horrific, violent event is related to pervasive sexism. Stamping out misogyny may require some mansplaining, unfortunately, from one man to another.

Enter: former "Jeopardy" wizard Arthur Chu, a self-identified nerd who has written a gripping call-to-action in the Daily Beast asking nerds to reevaluate how the culture they've consumed and participated in for years treats women. Movies, sitcoms and video games targeted toward nerds too often teach men that women are status symbols, a thing to be earned, he notes. "So what happens to nerdy guys who keep finding out that the princess they were promised is always in another castle?" Chu asks. "When they 'do everything right,' they get good grades, they get a decent job, and that wife they were promised in the package deal doesn’t arrive?" Frustration ensues, frustration that could lead to worse things.

Chu doesn't assume that Rodger was a nerd, and he doesn't oversimplify by saying that nerds who feel entitled to women or sex are going to end up killing, raping or assaulting them. He's making the point that (as research supports) entitlement breeds really negative attitudes toward women, attitudes that can increase violence against women, and therefore it's just better for everyone involved to stop thinking that way.

When this story broke, the initial mainstream coverage only talked about “mental illness,” not misogyny, a line that people are now fervently exhorting us to stick to even after the manifesto’s contents were revealed. Yet another high-profile tech CEO resignation ensued when the co-founder of Rap Genius decided Rodger’s manifesto was a hilarious joke.

People found one of the girls Rodger was obsessed with and began questioning if her “bullying” may have somehow triggered his rage. And, worst of all, he has fan pages on Facebook that still haven’t been taken down, filled with angry frustrated men singing his praises and seriously suggesting that the onus is on women to offer sex to men to keep them from going on rampages.

So, a question, to my fellow male nerds:

What the fuck is wrong with us?

How much longer are we going to be in denial that there’s a thing called “rape culture” and we ought to do something about it?

No, not the straw man that all men are constantly plotting rape, but that we live in an entitlement culture where guys think they need to be having sex with girls in order to be happy and fulfilled. That in a culture that constantly celebrates the narrative of guys trying hard, overcoming challenges, concocting clever ruses and automatically getting a woman thrown at them as a prize as a result, there will always be some guy who crosses the line into committing a violent crime to get what he “deserves,” or get vengeance for being denied it.

We are not Lewis from Revenge of the Nerds, we are not Steve Urkel from Family Matters, we are not Preston Myers from Can’t Hardly Wait, we are not Seth Rogen in every movie Seth Rogen has ever been in, we are not fucking Mario racing to the castle to beat Bowser because we know there’s a princess in there waiting for us.

We are not the lovable nerdy protagonist who’s lovable because he’s the protagonist. We’re not guaranteed to get laid by the hot chick of our dreams as long as we work hard enough at it. There isn’t a team of writers or a studio audience pulling for us to triumph by “getting the girl” in the end. And when our clever ruses and schemes to “get girls” fail, it’s not because the girls are too stupid or too bitchy or too shallow to play by those unwritten rules we’ve absorbed.

We need to get that. Really, really grok that, if our half of the species ever going to be worth a damn. Not getting that means that there will always be some percent of us who will be rapists, and abusers, and killers. And it means that the rest of us will always, on some fundamental level, be stupid and wrong when it comes to trying to understand the women we claim to love.

Really, the whole thing is worth a read. Check it out here.