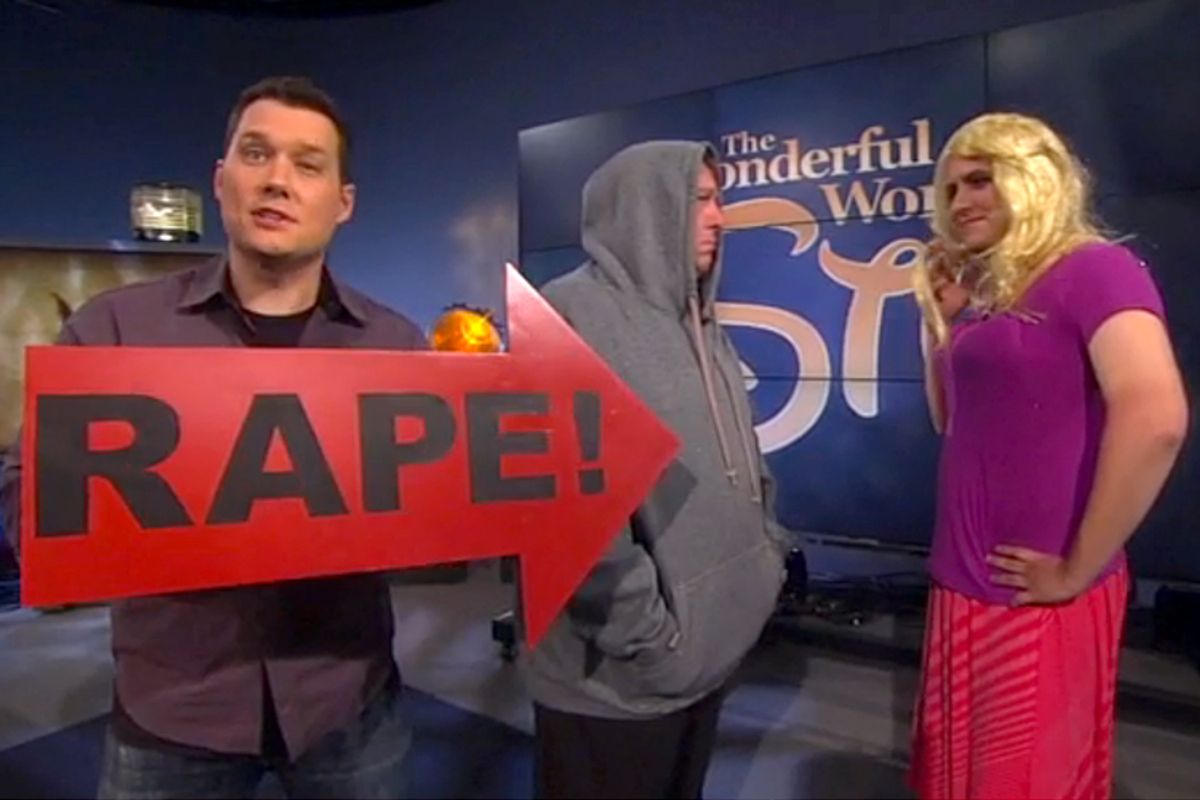 Like many of you, I prefer to go through life pretending to the best of my ability that Glenn Beck – along with "The Godfather: Part III" and the Budweiser Clamato Chelada – does not exist. Yet every now and then, something happens in the Becksphere and I have to pause to pay attention and retch. This would be one of those times.

Ever since the deadly mass shooting at University of California, Santa Barbara, last week, the Beck empire has been scrambling to debunk the idea that violence and sexual aggression toward women in America's universities is all that bad. As Media Matters reports, on his Tuesday broadcast, the Beck show refuted the recent number cited by the White House in its new campaign to curtail college rape "that one in five women have reported experiencing a sexual assault" as a "completely untrue statistic." As a member of Beck's team said, "They inflate all these assault numbers in cases like these. And what a disservice." It then presented a sketch from last week featuring "The Blaze's" Stu Burguiere in which Burguiere questioned the validity of the statistics, arguing that "this study is not representative of all colleges" and argued against its definitions of sexual assault that included being "drunk, high, drugged, or passed out and unable to consent" and "being pressured …" He explained, "I hate to say it, but it is possible to have consensual sex while drunk or high," magically ignoring that the distinction that "unable to consent" is right there in the wording. What followed next was a horrible drag sketch in which executive producer for TheBlaze Radio Network Jeff Fisher – or as Burguiere introduced him, "Rape expert Jeff Fisher" --  was enlisted to enact some pickup scenarios with a giggling dude in a blond wig, all ending with the TA DA! assertion that according to these crazy dumb studies, flirting with girls is rape. "Is convincing someone to sleep with you because you're sad the equivalent of a sexual assault?" he asked. "I mean that's just absurd."

I am a fan of facts. And if you want to question the methodology of a study or the wording of the questions – which, by the way, you can read for yourself -- have at it. It's important to consider the source and any mitigating data when reporting statistics. And if you like dressing up your crew in women's clothing, that's fine too. But it seems that the whole point of the tasteless routine was to diminish the message that sexual assault is a problem on our campuses, and to suggest that the research has been manipulated to persuade people of a particular agenda. Imagine selectively using research to promote one's own ideology! Ha ha ha! Oh wait.

Funnily enough, when last year Beck was trying to make the case for arming college students, he had a show that argued that "statistics show that one in four collegiate women report rape and one in five are raped." It added that anti-gun advocates "may want to pick a different segment of the population to focus on when trying to make the ridiculous case" against protecting our vulnerable college students, because "Something tells me that the one in five women mentioned above would have a few words for [Colorado Democrat Rep. Joe] Salazar’s 'theory' on whistles and safe zones." Back then, Glenn seemed to take the problem of campus assault very seriously, saying directly on BlazeTV, "I have one tip: Shoot him. That's my one tip. University of Glenn's advice on how to avoid being raped: Shoot him." He also actively mocked a University of Colorado list of safety tips that included, "Understand that some actions on your part might lead to harm" and asked, exasperated, "Isn't the definition of rape refusing to comply?" Seems that way back in 2013, college women didn't have to defend the circumstances leading up to their sexual assaults, or be second-guessed about the prevalence of rape at all, not to Glenn Beck and company! In short, according to Glenn Beck and his expert team, college sexual assault is not a totally exaggerated problem. Unless we're trying to arm students, in which case, it's real. Glad they've explained it all so rigorously, with the bonus use of wigs and funny jokes. Thanks for reminding us of at least one great truth, guys – that the news is still a whole lot better when we ignore you.