What is a huge army of private contractors secretly doing in Afghanistan? A leaked PowerPoint presentation explains 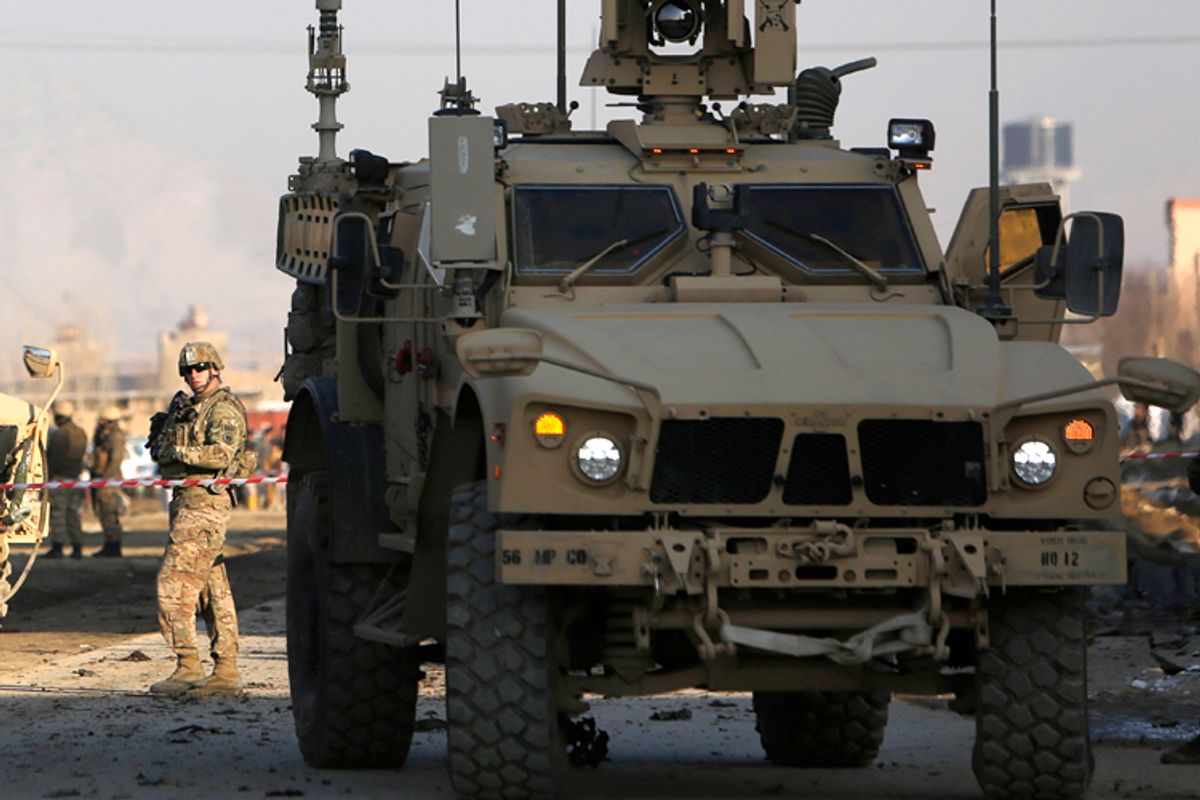 A U.S. soldier stands at the site of a suicide car bomb attack in Kabul February 10, 2014. A car bomb in the Afghan capital Kabul killed two United States contractors for the international security force ISAF on Monday, the NATO-led force and a U.S. official said. (Reuters/Mohammad Ismail)
--

On Tuesday, following his surprise Memorial Day visit to Bagram Air Force Base outside Kabul, President Obama announced that the United States plans to keep at least 9,800 U.S. troops in Afghanistan until 2016, further delaying the end of what he calls “America’s longest war.”

But in his remarks at the White House, the president didn’t say that the nearly 10,000 U.S. troops he’s asking to remain in an “advisory role” will be augmented by a huge army of private contractors. As they have in Iraq, contractors will vastly outnumber the U.S. uniformed forces training Afghan troops as well as the special operations forces providing counterterrorism operations against what the president called “the remnants of al-Qaida.”

The role of contractors in the Afghanistan war is spelled out in a document obtained by Salon from SAIC, one of the nation’s largest military and intelligence contractors. The document, an unclassified PowerPoint presentation, shows exactly how contractors have been used in that war since 2009, when Obama endorsed a surge of 33,000 troops and a counterinsurgency strategy in the war against the Taliban. Those policies increased the U.S. presence in Afghanistan to more than 100,000 troops.

One of the PowerPoint slides defines the four “mission areas” of the company’s five-year, $400 million contract with the U.S. Army Research Laboratory, which provides contracted services to other combat commands, special forces and other parts of the U.S. military. They are “Expeditionary Warfare; Irregular Warfare; Special Operations; Stabilization and Reconstruction Operations.”

There, in black and white, is proof positive of how deeply contractors have penetrated the U.S. war machine.

“We’ve already taken public functions and privatized them,” said Lawrence Wilkerson, a retired U.S. Army colonel who was the chief of staff to Secretary of State Colin Powell during the Bush administration, in a recent interview with Salon. “But this is an example of privatizing the ultimate public function, war.”

The PowerPoint was created by SAIC to help its subcontractors understand the Army’s needs in the contract, which was signed in 2010. The ARL, which is based in Adelphi, Maryland, just outside of Washington, provides the “underpinning science, technology, and analysis that enable full-spectrum operations” by the U.S. military, its website says.

According to SAIC, the ARL is the “execution agency in support of” all U.S. combatant commands, the United States Special Operations Command as well as the Defense Advanced Research Project Agency, which funds much of the U.S. military’s high-tech wizardry. “It is an SAIC contract vehicle to support COCOMs, DARPA and SOF, yet it can and has gone beyond this market as approved by ARL,” one slide states. It adds: “SAIC staff is very well matched with ARL counterparts.”

An ARL spokesperson confirmed that the PowerPoint presentation was authentic. A spokesperson for SAIC, which recently changed the name of its national security division to Leidos, would not comment, and directed my questions to the Army.

In addition to SAIC, the “ARL III” contract has 11 primes and more than 180 subcontractors, according to a project manager for the project. The primes include such well-known providers of weapons and intelligence as Raytheon, BAE Systems, Lockheed Martin and ManTech. Another major prime is General Atomics, which manufacturers the drones used extensively in Afghanistan and the Horn of Africa, including the MQ-1 Predator and MQ-9 Reaper (it tags its ads with the slogan “dwell, detect, destroy”).

The SAIC document was obtained from a source working for one of the subcontractors on the ARL project who asked that his identity, and the name of his employer, be kept secret. He also provided a copy of his company’s teaming agreement with SAIC for its work in Afghanistan with DARPA under the ARL contract. It states that  “the Army Research Laboratory is planning to issue a solicitation for classified work in support for DARPA requirements … The parties wish to establish a team arrangement in the form of a prime contractor/subcontractor relationship pursuant to which SAIC will act as the prime.”

Under the contract, the primes and their subcontractors provide typical technologies used by U.S. forces, including electronic and electro-optic equipment, systems integration software, energy generation and storage, as well as body armor and cold weather gear. But it also calls for contractors to provide software for “data analysis and intelligence tools,” as well as “individual and platform lethality.” The latter should be designed for “enhanced lethality, including accuracy, destructive capabilities, and speed of engagement for U.S. Army and USSOCOM individuals and platforms (air, land, sea).”

The contract ends in 2015, and "is being prepared now for recomplete," the SAIC document says.

Using contractors to supply or enhance weapons is not unusual. But expeditionary warfare, stabilization and reconstruction operations, and intelligence services are tasks that most Americans believe are the sole job of the government or the military.

Thomas A. Moyer, ARL’s public affairs director, told me that those areas don’t fit the legal definition of “inherently governmental,” the term for functions reserved only for men and women in uniform or government employees. “These type [of] activities do not require either the exercise of discretion in applying government authority, or the making of value judgements in making decisions for the government,” he said in an email.

I passed this exchange by a former high-ranking general who served in Afghanistan and later worked as a U.S. diplomat. “That makes my eyes water,” he said. The companies involved in the ARL contract, he explained, represent “an entirely new set of actors” who have come to prominence during the wars in Iraq and Afghanistan.

Under the new plan for Afghanistan, which the president is outlining in a speech Wednesday at West Point, U.S. forces will no longer be involved in direct combat after 2015 with the exception of counterterrorism operations directed against the Taliban and remnants of al-Qaida. Those operations would undoubtedly be led by the U.S. Special Forces Command, which is expected to retain a large presence in Afghanistan long after the last regular troops have left.

And, clearly, thousands of contractors.