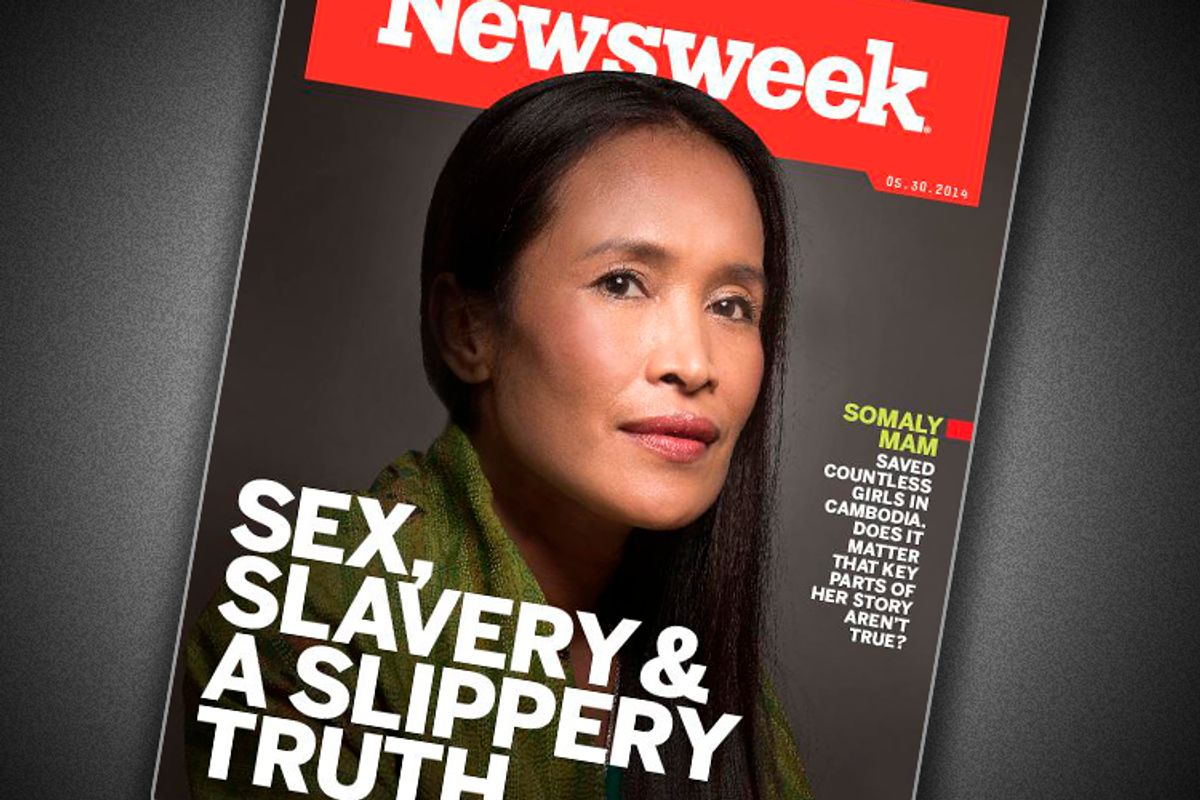 This week’s Newsweek poses this question of the sex-trafficking-victim-turned-modern-day-hero Somaly Mam, who announced today that she would be resigning from her foundation: “Does it matter that key parts of her story aren’t true?” This wasn’t a shocker to those of us who’ve followed journalist Simon Marks’ reporting on Somaly Mam over the years — or have had our own run-ins with her foundation, its employees or the ripple effect of her camera-ready fibs. (Hence the mag’s nickname among journos, No Shit Weekly.) But Marks’ article didn’t answer the question, and the answer matters.

Newsweek instead offered a solid compendium of Marks’ work, debunking the figurehead of the so-called “modern slavery movement.” A self-proclaimed former victim of forced sexual exploitation, Mam and husband Pierre Legros cofounded AFESIP in 1996, a Cambodian NGO devoted to saving women and children from sexual exploitation throughout Southeast Asia. Global fundraising arm the Somaly Mam Foundation came later, in 2007. The influx of attention brought an increase in confusion: Today Mam claims to have rescued more than 4,000 girls from sex slavery, but questions about her stories still arise from former staff members, her former husband and those supposed former sex slaves.

Marks' single-mindedness in wanting to destabilize Mam's perch is understandable. She has worked diligently to protect her reputations as victim and as savior for nearly two decades, but a lot has happened in that time. Without acknowledging this, we run the risk of ignoring our complicity in her story — a pernicious web of obfuscations and self-aggrandizements that tangle all the way back to the New York Times, and keep women’s economic opportunities around the world hovering somewhere near deplorable.

The biggest change in those two decades? Depends on whom you ask. An acquaintance at the U.S. State Department noted a shift in priorities from counterterrorism to anti-human trafficking: Similar interests and many of the same staff police borders with the same old tools under a supposedly new agenda. Pals covering the sex industry might forward a rise in policy initiatives both domestically and abroad that criminalize certain forms of women’s labor. Friends in Cambodia would say the biggest change during that time is in economic opportunity — for some. There are money and resources out there, in other words, for those willing to do or say the right thing. Like the young women who lied for cameras at Mam’s urging.

So does the Somaly Problem — when a supposed victim is also a charlatan, but for a cause with worthy aspects, like gender-based oppression in Cambodia — matter, Newsweek? Well, many of these policy changes, each of which further limit the economic advancement of low-income women, can be traced back to Mam. She was named a “Hero of Anti-Trafficking” by the U.S. State Department in 2007, Glamour’s “Woman of the Year” in 2006, and one of Time’s “Most Influential People” in 2009.

Many of her accolades, in turn, can be traced back to her friendship with New York Times columnist Nick Kristof. As of press time he still lists the Somaly Mam Foundation as a “partner” in Half the Sky Movement, his blatant attempt (along with wife Sheryl WuDunn) to brand and therefore profit from economic and physical violence against women and girls in the Global South. He also has yet to account for his inclusion of discredited statements by a Mam foundation “rescuee” in either the 2009 book or 2012 “documentary” “Half the Sky.” And Kristof’s live-tweeting of their brothel raid appears to violate the U.N. Conventions on the Rights of the Child, and his purchase of two “sex slaves” for media purposes is not condoned by Cambodian Human Trafficking Law.

Kristof may, eventually, claim to have been duped. I believe he’ll be lying (again), although other folks who are not Pulitzer Prize-winning reporters may be more sincere. The alleged falsehoods in Mam’s biography, debunked by eyewitnesses but upheld by her organization — which Marks deserves kudos for tracking, and which the mainstream press should be shamed for failing to pick up on earlier — are troubling: Her own childhood exploitation, accounts of her daughter's kidnapping by pro-trafficking thugs, and young women's stories of rape and abuse often go unverified or unchallenged in Cambodia, yet are so oft repeated abroad as to give the semblance of truth. Unfortunately, these are lies many have profited from, including right-wing Christian fundamentalist NGOs, which have used the mantle of human trafficking to promote agendas that are clearly unrelated, like abstinence education in U.S. schools and religious instruction in Buddhist or Muslim areas abroad.

Mam can’t be held accountable for the impact of her tales as much as she can for establishing the culture of permanent victimhood we grant anti-trafficking NGO clients, including, but not limited to, those at her AFESIP shelters. (Several Cambodian friends have worked at her organizations; most left within a year and none will discuss their experiences, either socially or for the press.)

I visited one such NGO in Phnom Penh in January — not run by Mam, but built on the attention she’s brought to the issue since 2007. What I saw was not shocking: totally normal Cambodian women in a large room, sewing apparel. But it wasn’t social services, either: It was a garment factory. More distressing was that I was not allowed to ask the women any questions about “their previous lives,” a distinction that covered any question I might ask, since I certainly wasn't going to ask if they were excited about the jobs they’d be placed in, in the low-paying, high-risk garment sector when they left the NGO. As a reporter, being unable to ask questions — aka verify facts — means I can’t do my job.

Usually, an enforced culture of silence shrouds abuse and coercion. Yet somehow we’ve been given to believe — by Mam, Kristof and hand-selected victims who sometimes turn out, later, to have been fed scripted hard-luck tales — that here, silence is nothing but healing.

It doesn’t add up. But from my desk, even this doesn’t account for the damage Mam’s Enterprise of Cards has wrought. Her downtrodden-girl-overcomes-it-all-to-jail-abusers narrative is extremely compelling, both to Cambodians, who need more women heroes, and to young women in the U.S. On top of the credibility problem she has created for real victims of rape and abuse, Mam has made freeing women from oppression look easy, in her boldest and most damaging lie. It’s not.

Ending deeply embedded misogynistic practices, including both sex trafficking, which is likely rarer than Mam admits, and the policies supposedly waging war against it, is not an effortless gig. I’ve nonetheless heard several students expressing the desire to get into the brothel-busting game themselves. Listen: I spent seven years researching and doing work in Cambodia, made concerted efforts to learn the language, developed a strong stomach and reliable sources, and honed my skills in investigative reporting before I could even understand what, really, anti-human trafficking NGOs do. What they do is normalize existent labor opportunities for women, however low the pay, dangerous the conditions, or abusive an environment they may be. And they shame women who reject such jobs.

Around 350,000 people, 90 percent women, work in the garment industry in Cambodia, earning, as of a few months ago, under two-thirds a living wage. Seventy percent of the wares they produce are sold in the US. Massive strikes in recent years have seen demand grow for an increase in pay, although other jobs for women remain few and unregulated. Among them, work in the sex industry is both reliable and flexible enough for, say, working moms. (We may hold Mam partially responsible for Kristof’s confusion between sex workers and trafficking victims. Certainly, policies she’s supported make few distinctions between the two, and countless of the young women she’s “saved” — including one of the two Kristof “purchased” — simply returned to jobs at brothels upon being “freed.”)

Most women in Cambodia live under conditions of poverty and desperation, and the garment industry’s insistent refusal to meet living-wage standards ensures this will continue for some time. Still, garment workers know an entire international trade system relies on their willing participation, which was how they built such a strong showing in the last elections. The big brands know it too, which is why the Nike Foundation funds Half the Sky — as do other multinationals that both enforce, and rely on, women’s desperate poverty around the world.

What anti-trafficking NGOs are saving women from, in other words, is a life outside the international garment trade, which, according to folks who sell us our clothes, is no kind of life at all — even though folks in those jobs tell me they can barely survive. About one-seventh of the world’s population of women works in the garment industry, which very rarely pays more than half a living wage (including to folks who work fast fashion retail in U.S. urban centers). This helps keep women in poverty around the globe.

So it does matter, Newsweek, that key parts of Somaly’s story aren’t true. She’s “saving girls” by installing them firmly within a system of entrenched, gender-based poverty. This matters to all of us who would like to see that system’s demise.