Some men I've known: My life, as told through sexual harassment 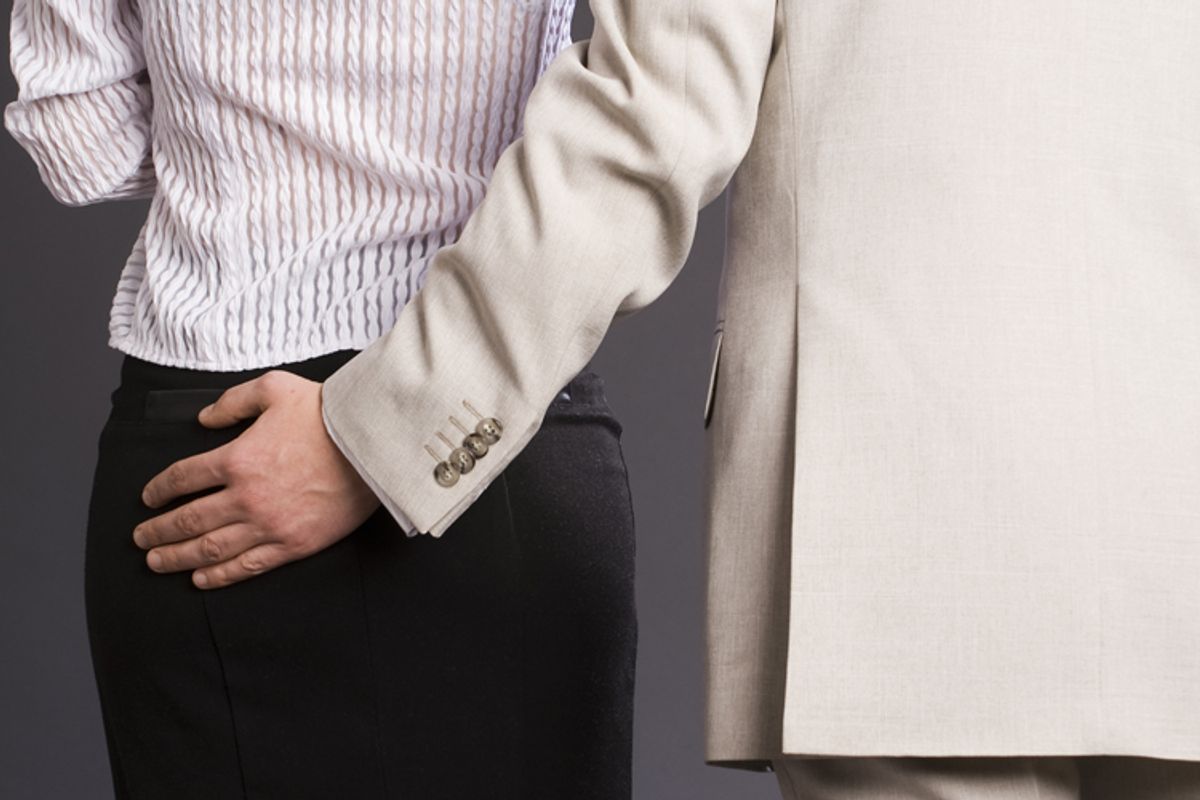 When I was in my early 20s I was sexually harassed by a co-worker. I was a feminist and a women’s studies major and had volunteered for a sexual assault response line, and yet when my co-worker commented on my breasts, when he started touching my back inappropriately at work and offering massages and talking about my breasts again and how they looked good in that shirt I was wearing and how I could pull off one of those pointy Madonna bras, I completely shut down. I didn’t report it to HR, even though I knew and liked our kind, quiet generalist. I didn’t tell my boss, who was a woman I admired. I didn’t tell my boyfriend, not for two years, not until we were two bottles deep at a wine bar and it all came up hot and fast like vomit.

I quit that job. It’s been almost 10 years. I think about the harassment almost every day, and the shame I still feel over not telling anyone.

I know now why I didn’t tell anyone: I thought people would not believe me. I thought they’d be mad at me. We were all friends, my co-workers and I and him and I thought they’d think I was making it all up, misreading things, imagining stuff that wasn’t really there. He used to come up to me at my desk, in plain view of everyone, and do these things. I use to think I was crazy. How was no one else seeing this? And how was he not doing this to anyone else (or maybe he was?)? Why did he pick me?

And even worse: Why was I letting him? Why didn’t I tell?

When I was in fifth grade my best friend and I wrote a letter to our elementary school principal because we felt our gym teacher was sexist. He only ever picked boys to demonstrate athletic moves, treating them like experts when the girls were just as physically gifted. We delivered it to the principal, who promised not to name us to the gym teacher. But then a few days later the teacher ranted furiously about our letter in class and pulled us aside after, and was offended and rude and belittling. So maybe that is why I kept my mouth shut again, years later. Because we learn at a young age that when girls tell, we get in trouble.

I did say something to that guy at work once. He came over to my desk, and put his hands on my back like he always did. It would make my entire body burn and my stomach would rocket around my insides and my heart would pound. God I fucking hated it. It made me sick to my stomach. And so that time I said, “Stop it. I don’t like that.” And boy, did that scare the shit out of him. He immediately began apologizing and talking about how he had kids and a wife, like that somehow meant that his actions weren’t completely creepy and wrong. That was the moment I realized my harasser was a coward.

When I was in college there was a three-mile loop everyone would run along the road, and every time I was out there huffing along I would get honked at and cat-called, even in the dead of winter in Maine. My male friends looked at me with open-mouthed disbelief when I told them about it. They ran the same route and never heard a peep.

Yesterday the same thing happened while I ran around the Silver Lake reservoir.

Recently my husband forwarded me an email from an elderly neighbor. It was one of those list of safety tips that 80-year-old alarmists send -- don’t park next to vans at the mall, etc., etc. My husband thought it was hilarious and insane, which it was, I guess. “But,” I said to him, “I do a lot of these things all the time.”

I wrote a list on my phone recently, of all the times I’ve been touched, followed, hollered at, screamed at, threatened and chased by men. All the penises I’ve been shown without giving permission. It is overwhelming to look at. One woman’s life, as told through sexual harassment. I thought about listing it all out here; I saw Maureen Johnson do something similar recently and it felt empowering and depressing to read. I thought about writing out each experience in detail, but honestly I don’t know if I have the energy.

Just know that one time a man followed me on a beautiful sunny morning and tried to pull me behind a building on the University of Cape Town campus while I was carrying a bunch of library books, and so I dropped the books and ran. One time I was kayaking with my friend Susan on the Charles River and we paddled under a pantless man standing on a bridge above us jerking off and shouting. One time I took a walk through New York City a few months before we moved to L.A. and guys in a giant SUV circled by me a few times yelling and then followed me down a side street before they drove away. Once in high school a guy I met in D.C. at a National Young Leaders Conference starting sending me harassing emails and would call my house relentlessly and kept threatening to come over to where I lived so I called the cops and they looked at me like I was crazy. Once a man screamed “cunt” at me over and over again at a subway station and followed me and the other people on the platform just stood around and watched. Once a guy sitting next to me on the subway groped my thigh while covering his body/my leg with a giant coat and pretending to sleep. Once a man flashed his balls at me through his shorts and then got off the train hiding a huge erection behind a gym bag. Once a guy said “smile” to me on 7th Avenue and when I told him to fuck off he followed me down the street, screaming at me and calling me a bitch.

One time in college my best friend and I were walking to our dorm at night, and a car kept circling by us over and over again. Terrified and certain that something bad was about to happen to us, we took off sprinting. We made it to our dorm out of breath and terrified, and the car pulled up next to us. I felt a wave of vomit spill over me. This was it. The bad thing I’d feared and dreaded my whole life was finally here.

The car door opened, and a delivery guy got out with a couple of pizzas.