6 things that should never be privatized

From prisons to fire departments, these essentials must be protected from corporate greed 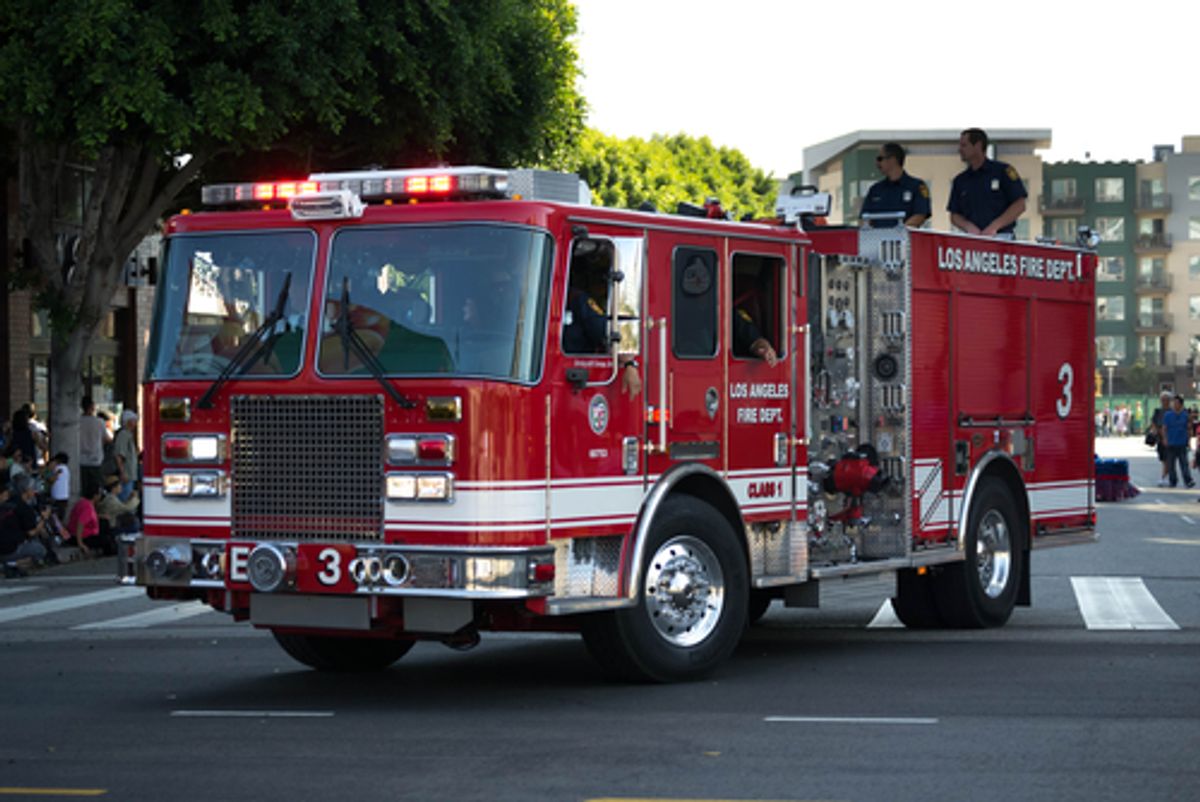 The idea behind operating gas, water or electric services as public utilities is that those things are important to people’s health and survival and therefore, must be protected from corporate greed. Some things belong in the private sector, others don’t.

Here are six things in the United States that should remain in the public sector.

In 2000, residents of Cochabamba (Bolivia’s third largest city) suffered enormous hardship when the city’s public water utility SEMAPA was sold and taken over by the private consortium Aguas del Tunari: prices doubled or tripled, service was shut off for those who couldn’t afford the higher rates, and manycochabambinos suddenly found themselves without running water in their homes. Civil unrest and huge demonstrations followed, and a general strike shut the city down for four days.

But eventually, after many violent clashes between protestors and Bolivian riot police, water went back to being a public utility in Cochabamba, and the Aguas del Tunari contract was canceled. In fact, leftist Evo Morales’ strong opposition to water privatization and support of the Cochabamba Water Revolt is one of the things that led to his presidential victory in Bolivia’s 2005 election. But in the U.S., Americans are still learning the hard way that privatizing running water is a terrible idea.

In 2012, Eleanor Sochanski, a 91-year-old resident of Camden, NJ, suddenly received a bill from United Water for $2,167 after averaging quarterly bills of $50-$60—and even though the private company couldn’t explain the bill and no leaks were found, it placed a lien on Sochanski’s home. Similarly, California-American Water couldn’t explain the $9,800 bill Toni Ray of Carmel Valley, CA suddenly received after having averaged bills of around $40 a month in her home. And Middletown, NJ resident Joe Pezzano was shocked to discover that New Jersey American Water Co. (another private company) had shut off his water entirely because of an overdue balance of 84 cents. If this type of insanity continues, Americans may need a Cochabamba Water Revolt of their own.

Justice, at least in theory, is supposed to be blind. But when corporate greed is involved, it can become very biased in favor of incarcerating people. The United States incarcerates, per capita, more people than any other country in the world, including North Korea, Saudi Arabia, Iran and the People’s Republic of China. While the vast majority of incarcerated Americans are held in government-owned prisons and jails, the growth of privately owned prisons is a disturbing and dangerous trend because the profit motive encourages more arrests, more prosecutions and more convictions.

In a 2011 study, the American Civil Liberties Union reported: “Private prisons for adults were virtually non-existent until the early 1980s, but the number of prisoners in private prisons increased by approximately 1600% between 1990 and 2009. Today, for-profit companies are responsible for approximately 6% of state prisoners, 16% of federal prisoners and, according to one report, nearly half of all immigrants detained by the federal government.”

The ACLU also reported that private prisons in the U.S. were more likely to have poorly trained and underpaid staff, unsanitary conditions and “a heightened level of violence against prisoners.” And the ACLU noted that when the largest private prison company in the U.S., the Corrections Corporation of America, filed an annual report with the Securities and Exchange Commission in 2010, it admitted that its business model depends on high rates of incarceration, saying, “The demand for our facilities and services could be adversely affected by the relaxation of enforcement efforts, leniency in conviction or parole standards and sentencing practices or through the decriminalization of certain activities that are currently proscribed by criminal laws. For instance, any changes with respect to drugs and controlled substances or illegal immigration could affect the number of persons arrested, convicted and sentenced, thereby potentially reducing demand for correctional facilities to house them.”

New Hampshire Gov. Maggie Hassan has opposed efforts to privatize prisons in that state, and any politicians—Democrat, Republican or otherwise—who don’t share that view should be voted out of office.

Libertarian John Stossel (a host on the Fox Business Channel and writer for FoxNews.com) has long been a proponent of privatizing fire departments, which he believes would lower Americans’ tax burden and make them safer. As Stossel sees it, privatization would make firefighting more efficient. But the subscription-based privatized firefighting model can have disastrous results.

In 1996, the village of Rye Brook, NY (which is about 30 miles from Manhattan) made the mistake of hiring the Rural/Metro Fire Department (a private company) to fight fires—prior to that, firefighter protection in Rye Brook was handled by the fire department of nearby Port Chester, NY. But Rye Brook returned to public-sector firefighting only two years later after a $1 million home was destroyed by fire—perhaps avoidably. Salvatore M. Cresenzi, Rye Brook’s mayor at the time, acknowledged that Rye Brook’s deal with Rural/Metro “was not a success”—and public-sector firefighters’ unions asserted that the home could have been saved had Rural/Metro operated more efficiently in Rye Brook.

Seventeen years later in August 2013, there was another horror story involving Rural/Metro—this time in Surprise, Arizona (a Phoenix suburb), where Justin and Kasia Purcell lived in a mobile home. Two weeks after their home burned to the ground, the Purcells received a bill for $19,825 from Rural/Metro because they had not paid the annual subscription Rural/Metro charges for firefighter service in Surprise. But the Purcells told the Huffington Post they had no idea such a service existed and that they would have gladly paid the annual fee had they known.

The Purcells’ nightmare is a classic example of why the public is much better served by an “all for one/one for all” approach to firefighting: people pay taxes, and firefighting is among the things those taxes cover. Period. And there are no outrageous bills for $19,825 when your home burns to the ground.

During his two terms as president of the U.S., George W. Bush called for the privatization of Social Security—and that dreadful idea should have been put to rest permanently after the economic meltdown of September 2008. But instead, far-right wingnuts have doubled down on their insanity: the Tea Party, Texas Gov. Rick Perry, Wisconsin Rep. Paul Ryan, the Club for Growth and the Heritage Foundation still cling to the delusion that allowing Wall Street banksters to play Russian roulette with Social Security would be a good idea. They haven’t learned the lessons of the Great Depression of the 1930s or the current economic crisis, both of which underscore the need for strict regulation of banking. Certainly, saving for retirement doesn’t have to involve Social Security exclusively—there is nothing wrong with having an FDIC-insured private-sector IRA (individual retirement account) in addition to Social Security. But Social Security itself needs to remain in the public sector just as President Franklin Delano Roosevelt envisioned.

During the U.S.’ healthcare reform debate in 2009, low-information members of the Tea Party became the butt of jokes when they carried signs saying things like, “Keep government out of my Medicare, you damn socialists” and  “keep your government hands off my Medicare.” But Medicare, which covers all Americans 65 and older, was not founded by Blue Cross or Aetna: it’s a government program that was started in 1965 as part of President Lyndon Johnson’s Great Society and was expanded by his Republican successor Richard Nixon (who, for all his flaws, was relatively sensible when it came to economics, the environment and healthcare reform).

Medicare has been wildly popular among America’s senior citizens, who like the fact that they are guaranteed coverage. But that hasn’t stopped Paul Ryan from trying to end Medicare as we know it: Ryan has proposed replacing Medicare with vouchers for private insurance, which would make healthcare much more expensive for seniors. Richard Kirsch of the Roosevelt Institute was not exaggerating when he said that the privatization of Medicare as envisioned by Ryan “would kill tens of thousands of people. Every year.”

In Philadelphia, many people get their electricity from PECO Energy (a public utility) and their gas from the city-owned PGW (which was founded in 1836). One of the most outspoken opponents of Nutter’s desire tosell PGW to UIL has been Sam Bernhardt, senior Pennsylvania organizer for Food & Water Watch. Bernhardt has been warning that under UIL, Philadelphians can expect major increases in their gas bills—often noting that major rate hikes have occurred “time and time again” when water utilities were privatized.

In a Huffington Post commentary, Thom Nickels asserted: “PGW is good for Philadelphia because, as a nonprofit public utility, it benefits the entire city with gas rates that, though high, would be three times as high if a private corporation like UIL—which exists only to maximize shareholder value—gained control of it....Within 10 years or less, gas rates under UIL will be through the roof....With very cold winters becoming the norm, future gas rates under UIH may very well spell disaster for most city residents.”

Indeed, if UIL is allowed to significantly raise rates on PGW customers, a lot of Philadelphians are going to be much colder during the winter.