"A Million Ways to Die in the West": How Seth MacFarlane became the new Adam Sandler 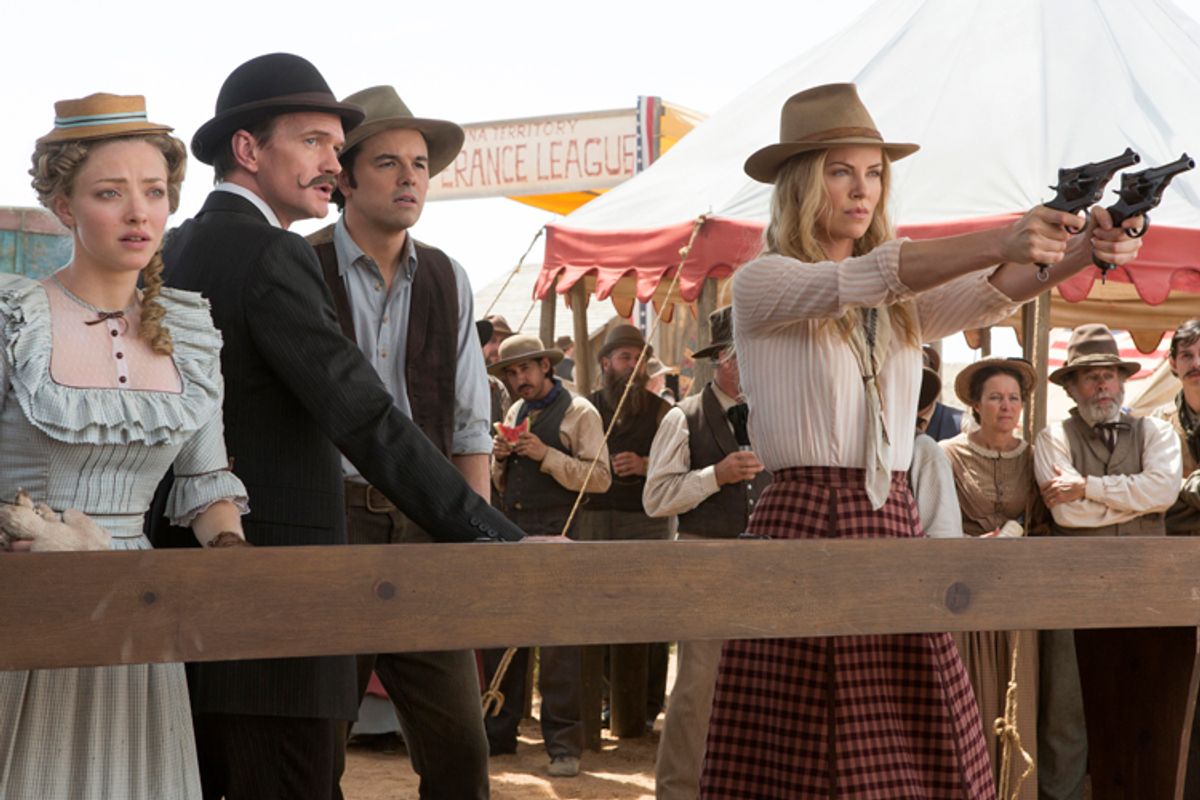 In “A Million Ways to Die in the West,” Seth MacFarlane displays some of the qualities that made me feel that people abused him unfairly for his notorious turn as Oscars host in 2013 – and also some qualities that helped me understand why people hate him so much. As far as I can tell, MacFarlane’s long-running animated TV show “Family Guy” and his 2012 hit movie “Ted” are subject to the same division: Not many people feel neutral about them. At his best, MacFarlane has the gift of self-deflating farce, and the comic insight to grasp that you can get away with all sorts of offensive or idiotic gags if you make yourself the butt of the joke. While pretty much every professional comedian has mastered good timing, MacFarlane is a master of bad timing, which is more unusual.

He has an extended bit of business in this movie when his character, a hapless 19th-century sheep rancher named Albert, tries to deliver a devastating pornographic putdown to the mustachioed fop who has stolen his girl. (Said chick-stealing fop is played by Neil Patrick Harris and, yeah, hardy-har-har.) But the gag is incomprehensible, none of the onlookers laugh, and Albert sneaks back a few seconds later to explain himself, which only heightens the awkwardness. MacFarlane, who also directed the film, leaves himself out there to struggle for a few more seconds, like the bridegroom’s brother trying to save a rehearsal dinner that’s gone south, until Albert can gather what remains of his dignity and depart. The big laugh this got from the movie’s audience when I saw it was genuine, and came more from compassion than mockery.

You can’t say that MacFarlane lacks ambition, or at least bravado. With “Ted” he made a story about an adult man and his foulmouthed talking teddy bear into a massive comedy hit, and here he directs, co-writes and stars in a spoof of a movie genre whose popularity had vanished before most of today’s moviegoing audience was born. Maybe he’s trying to recapture the spirit of Mel Brooks’ “Blazing Saddles,” but that movie was made in 1974, when everyone watching it had grown up with “Shane” and “True Grit” and “High Noon.” Toward what end MacFarlane is channeling his abundant ambition is a more complicated question.

By introducing his own persona into the equation, as both sad-sack leading man and wiseass commentator on how much life sucks in the Old West, MacFarlane seems to be bidding for the comedy throne of Adam Sandler, whose star is evidently on the wane after several commercial duds. Sandler has built an immensely lucrative career off movies that self-evidently don’t give a damn about dramatic realism and that combine a series of outrageous set-pieces and toilet gags with simple-minded and highly sentimental stories of redemption. That’s exactly the terrain we’re in here, and while the whole thing feels weirdly miscalculated to me, “A Million Ways to Die in the West” tweaks the formula just enough, delivers a few laughs and keeps the guest stars coming. I don't think it’s a “Ted”-scale hit, but it’s probably not a bomb.

In fairness, MacFarlane does not hew to the Sandler maxim of extreme casualness, which dictates that no one involved with the film should behave at any time as if they cared whether it ever got finished or how it might turn out. Yes, Albert and the long, lean stranger named Anna (Charlize Theron) who assigns herself the task of turning him into an acceptable man sound and act nothing like 19th-century Americans – they’re all like “Duuude!” and “Fuuuuck!” and “Noooo!” and “Whaaat!” -- but that’s clearly a considered choice. And lots of things about the movie are only in there to yank our collective chain, like Harris as a suave ladykiller (though John Cho and Kal Penn got there first) and Sarah Silverman as a prostitute who talks about the details of her workday in way too much detail but won’t sleep with virginal boyfriend Giovanni Ribisi because they’re both devout Christians. (Whoa! WTF!)

But none of that conceals the fact that significant effort went into this production. There are widescreen shots of the iconic Monument Valley scenery; there’s a dolly-shot horseback sequence, no doubt ripped off from some John Ford picture; there’s an elaborate barn-dance number featuring complicated choreography, pro-style hoofing from Harris (of course), an original song and patter from Bill Maher. There’s a dirty lowdown villain played by Liam Neeson, who will take any role but does not work cheap, and a cameo by Gilbert Gottfried as an Abe Lincoln impersonator. No doubt Gottfried does work dirt-cheap these days – in fact, I sincerely hope he had to pay MacFarlane – but consider the pain and suffering involved in having him around, even for a few hours!

While some of the special effects in “A Million Ways to Die in the West” are unbelievably crappy, others are pretty effective, including the gruesome scene when we see a guy crushed by a giant block of ice that just came off the train from Boston. You see, the action, such as it is, gets periodically interrupted by non-sequitur violent deaths, to support the otherwise irrelevant title and to illustrate Albert’s premise that life in the Arizona Territory circa 1882 is basically crap. Speaking of which, there’s also a scene in which Harris’ character, the supercilious proprietor of a mustache-supply emporium, is smitten with uncontrollable diarrhea and must poop into other men’s hats. I’ll admit that I laughed, maybe because of Harris’ grotesque, extended slapstick routine and maybe because MacFarlane understands that if you drag a joke out long enough, the audience is left with no choice except to defend itself with laughter. That particular special effect was not expensive or difficult, I’m thinking.

I refuse to supply a plot synopsis; it’s simply not worth it. There’s a girl played by Amanda Seyfried and another one played by Theron, and then there’s the bandit played by Neeson, who winds up with a daisy in his butt-crack. (I’m assuming a butt-double was used.) MacFarlane is simultaneously a congenial screen presence and a remarkably bad actor, so none of the interpersonal dynamics are even remotely convincing. The so-called romance between Albert and Theron’s Anna has negative chemistry; it feels more like she’s taken a troubled youngster under her wing, via the Big Sisters program. If you insist on finding a story in this movie, it’s the story of MacFarlane flirting with offensive or unacceptable gags – cracks about the “selfish” Indians who won’t let “us” have the country, a shooting gallery featuring “runaway slave” caricatures – and then reassuring us that he means no harm, he's not a right-wing asshole, his heart’s in the right place and so on. To return to the theme of the moment, he wants to embrace white-guy privilege and renounce it at the same time. It’s a neat trick if you can make it work.