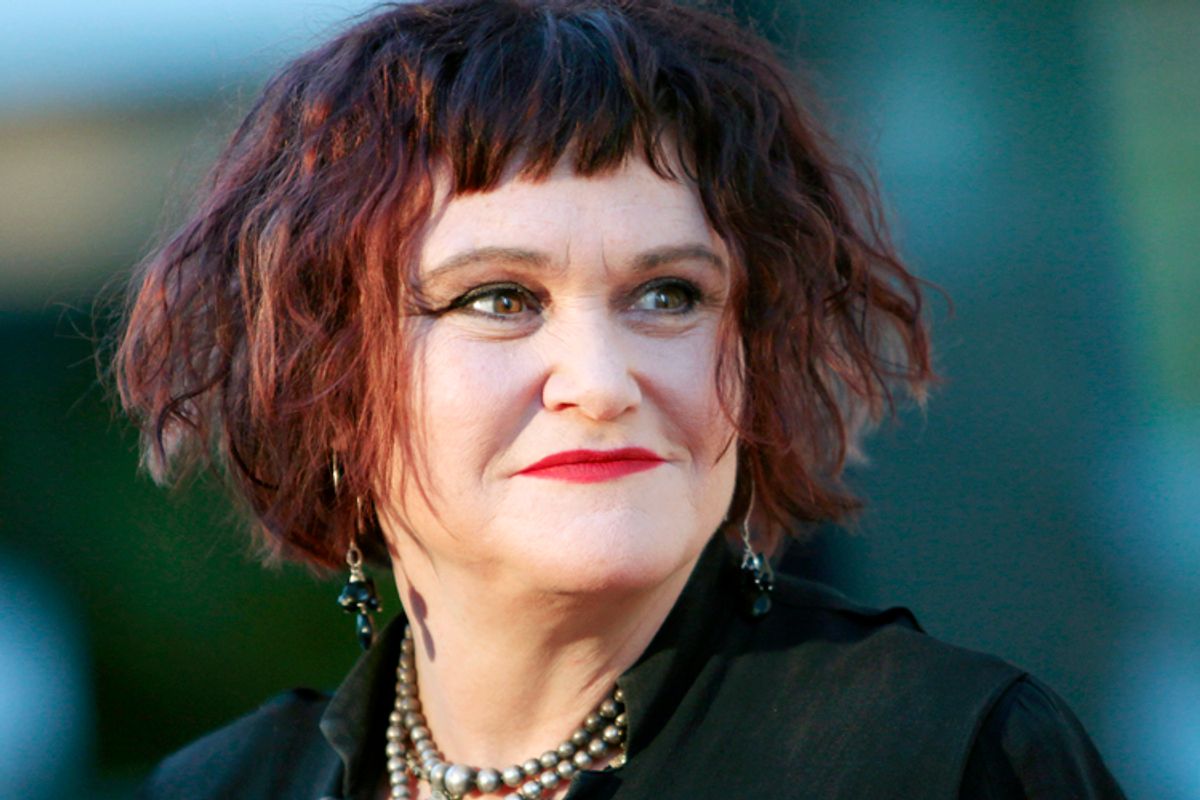 There are few letdowns in life quite like the one that comes when you realize one of your heroes is a total crackpot. And for a whole lot of music fans just like me, the mounting evidence that legendary punk goddess has gone off the rails is a real blow.

In recent months, Exene Cervenka -- author, artist and, most notably, frontwoman of X -- has taken to using social media as a means of expressing her support for various truther theories. Just two months ago, Dangerous Minds called her the worst thing you can call another human being: "the new Alex Jones." Harsh, but fair. The YouTube channel for the self-proclaimed "conspiracy theorist," it noted, is "full-to-burstin' with bonkers" shares of truther madness, as well as her own rather inexplicable video uploads about "illuminati finger puppets" and "brainwash bloodbath" and stuff about the "Boston Bombing Hoax" involving the skin color of one of the children "the beast" was carrying. Back then, Cervenka's skepticism about 9/11, Sandy Hook and the Boston bombing was already out there in her public repertoire, which may be why she coincidentally tweeted last month that "always the same, the trolls call you mentally ill, crazy, say i'm sorry used to like you... OMG!!! get a new ROUTINE! it's not working!!!!"

Given that little window into the thoughts that are currently preoccupying her, imagine then, what a bonanza the mass shooting at UCSB last week would be for a person like Cervenka. And sure enough, she has of late taken a break from posts about "fake vaccination" drives and the "Orwellian police state" to begin a Twitter spree posting videos about Elliot Rodger and the "Santa Barbara shooting hoax." She is, she says, "sick of these hoaxes." She's sick, apparently, of the allegedly fake videos of Rodger, of the "Proof Glass arrived before police Santa Barbara Shooting Hoax" and the way the "Santa Barbara Shooting Staged for Gun Control."

Plenty of us may not have cared when Meat Loaf went a little loco for Mitt Romney, and have been unmoved by Ted Nugent's and Victoria Jackson's newer incarnations as full time right-wing trolls. But I admit I've been truly saddened to see comedy icon Roseanne Barr turn conspiracy theorist about "false flag terror attacks to remove the 2nd amendment (Boston Marathon; case in point)" and mind control. And Cervenka's evolution from one of the most powerful, distinctive and influential voices in modern music to what looks like another paranoid Twitter troll is almost heartbreaking. This is a woman who's given so much to so many over a nearly four-decade career, who's melting down in front of the same fans who can soundtrack their youths to "Wild Gift" and "Los Angeles."

It's impossible to say at this point what's brought the once brilliant Cervenka to this incredibly low place. It's a sad thing to watch. It's hard to feel entirely sympathetic, though, when these truthers are inflicting real pain on the people who've suffered the most already -- like the family of Grace McDonnell, who were taunted by the thief who stole the young Sandy Hook shooting victim's memorial sign -- because he said her murder was a hoax. So when Cervenka links to a video that calls Richard Martinez, whose son was gunned down by Elliot Rodger on Friday, an "actor," she is spreading hurt. She is using her fame and her platform to bring a savage amount of additional grief on people who've lost their children. It's unconscionable that she's making this a public spectacle. But then, that's what truthers do. They harass and belittle already vulnerable people and make already terrible events exponentially worse. And Exene Cervenka is no longer a punk hero. She's just a punk.