Asset managers could face a just-created super-regulator. Here's why Mary Jo White's SEC is fighting it all the way 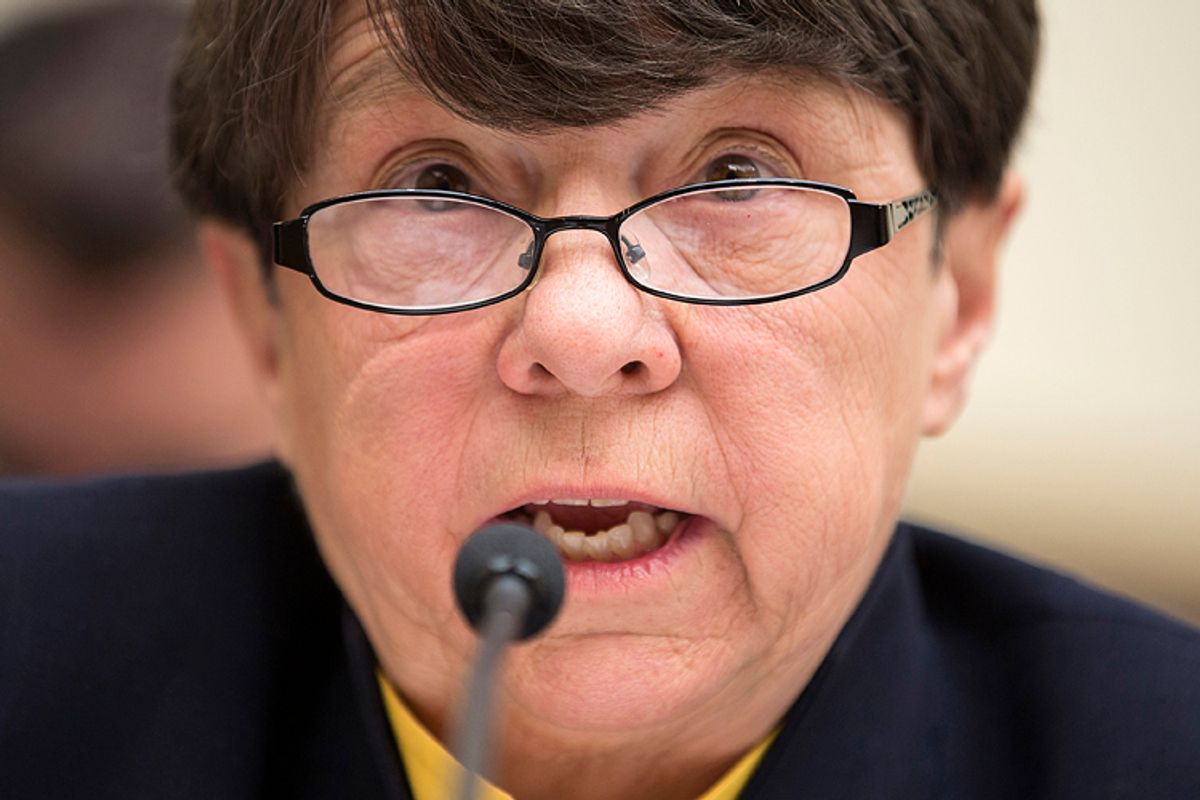 The Securities and Exchange Commission has touched off a major bureaucratic scuffle with its fellow financial regulators by proposing to, in the words of one Democratic aide, “rip the heart out of Dodd-Frank.” The SEC, following the wishes of one of its Republican commissioners, has initiated a turf war over which agency gets to monitor a key corner of the financial system.

At issue are so-called asset managers, companies like BlackRock, Fidelity and Pimco, who manage investments on behalf of individuals and groups through mutual funds and other vehicles. Asset management firms collectively control an astonishing $53 trillion in investor funds.

Historically, the SEC has regulated asset managers. But under Dodd-Frank, the Financial Stability Oversight Council, a newly created super-regulator, can designate “systemically important financial institutions,” or SIFIs, and subject them to rules previously reserved for banks. An FSOC designation puts non-bank SIFIs under the supervision of the Federal Reserve, subjecting them to tougher standards, like having to carry more capital to cover against losses. This makes sense, because non-banks like AIG were major contributors to the crisis.

Two asset managers – BlackRock, which manages $3.8 trillion in funds, and Fidelity, which manages $1.9 trillion – came under official FSOC review last November, and the SEC has fought it virtually all the way.

Late last week, at a conference sponsored by the Investment Company Institute, the lobbying group for asset managers, SEC chairwoman Mary Jo White echoed industry arguments. White, who has a vote on the 10-member FSOC, claimed that asset managers represent a safe sector of the financial system, because they don’t place risk on their own balance sheets, instead merely managing funds for others. In addition, she argued that the SEC’s capital markets expertise makes them the right agency to oversee asset managers, not the traditional banking regulators who comprise a majority of the FSOC.

White has proposed new rules for asset managers, including expanded stress testing and more transparency for their portfolios. But clearly, she wants to keep that turf, rather than turn over the biggest companies to FSOC. “It is enormously important for FSOC, before it takes any decision, to make certain it has the requisite expertise,” White said. “A lot of it has come and needs to come from the industry.” Notably, the SEC did not place White’s remarks on its website.

Reformers might have less of a problem with the SEC handling asset managers if they showed any interest in stiffer oversight of the financial industry in recent years. The SEC has been slow to write Dodd-Frank rules, punted on rules for money markets, completely undermined proposed rules for credit rating agencies, let banks off the hook for toxic securities designed prior to the financial crisis, and has been blasted as irresponsibly weak by their own ex-lawyers. This episode furthers the impression that the SEC cares more about its friends at BlackRock and other Wall Street giants than about safety and stability for investors.

The turf battle goes back several months. Last September, the Treasury Department’s Office of Financial Research issued a report called “Asset Management and Financial Stability.” Originally, this was to be a joint report between the OFR and the SEC. According to those with knowledge of the deliberations, the SEC wanted the report to say that any risks generated by asset managers were well addressed by current securities laws, prompting no need for additional rules. OFR would not go along with that, and the SEC decided to pull out of the report before the deadline, refusing even to provide their data.

The OFR report concluded that some asset management activities “could create vulnerabilities” to the financial system, if improperly designed. For example, asset managers may “reach for yield” by accumulating riskier assets to try to snag higher returns, creating bigger losses in the event of a sudden shock. In addition, the securities lending business, which involves temporarily transferring securities to investors so they can use them for things like short-selling, could lead to trouble if the lender doesn’t keep enough cash collateral to guard against a crisis. AIG, in fact, got in lots of trouble with securities lending in 2008, and asset managers lost money as well. Finally, the failure of a large asset management firm could threaten the overall financial system, in the same way that other large firms with trillions in assets pose a risk.

In other words, OFR found sufficient reason for concern that poorly run asset managers could expose the system to danger. But the SEC, who refused to cooperate with the report, then attacked it, in a classic bait and switch. They claimed that OFR failed to collaborate with them, an assertion refuted by the Treasury Department, which released months of communication between the two agencies, showing that the SEC received 15 drafts of the report before its release. The SEC also asked for public comment on the report from asset managers, who predictably savaged it.

“The SEC has really put the hammer down to try to protect its regulatory turf,” said Marcus Stanley of Americans for Financial Reform, a coalition of advocates for stronger regulations on Wall Street. “They’re saying it’s not legitimate for FSOC to look over into capital markets, not even to look at data.”

Daniel Gallagher, a Republican commissioner on the SEC, wrote in a letter earlier this month that the OFR report was “fundamentally flawed,” particularly because of the absence of empirical data (which the SEC held back). He contended the report reflected a lack of understanding about asset managers, and that the SEC had capital markets regulation well in hand. You can see plenty of continuity between Gallagher’s letter and Mary Jo White’s position.

While financial reformers view the decision on whether individual asset managers should be designated as SIFIs as a legitimate debate, they see White’s alignment with Gallagher as a bigger problem. “This is an attack on the core of Dodd-Frank in a way that I’m not sure [White] realizes,” said one Senate Democratic aide, adding that SIFI designation was Title I of the financial reform law, a testament to its importance. “The heart of Dodd-Frank is the ability to regulate big firms that are systemically significant. This attack is ripping the heart out of it. Buying into Gallagher’s views of how the SEC should be run is extremely troubling.”

No asset manager has yet been designated, and any decision is months away. Top Treasury Department official Mary Miller believes the industry is “overreacting” to what has been done thus far. (White pointedly disagreed with that assessment last week.) But that hasn’t stopped asset managers from round-the-clock lobbying to get FSOC to back off, arguing that any new regulations would make mutual funds more expensive. Senators from both parties, prodded by the industry, criticized the OFR report and the bid to tag asset managers as SIFIs back in January.

Asset managers may be completely innocuous. But the FSOC correctly allows regulators to scrutinize every aspect of the financial system. As we saw in the crisis, losses can migrate across the system to its linked counter-parties; you cannot really isolate one part as the “good” area that doesn’t require aggressive oversight. Walling off pieces of the system undermines the entire purpose of FSOC, and weakens an already weak financial reform law.

We have enough problems with financial regulation to have a turf war impede the few mechanisms we have to deter runaway risk. The SEC has covered itself in shame during the crisis years, and this preoccupation with jurisdiction shows that the black marks on their record haven’t gone away.