EXCLUSIVE: Talks heating up between Cuomo, Working Families Party -- deal could be imminent 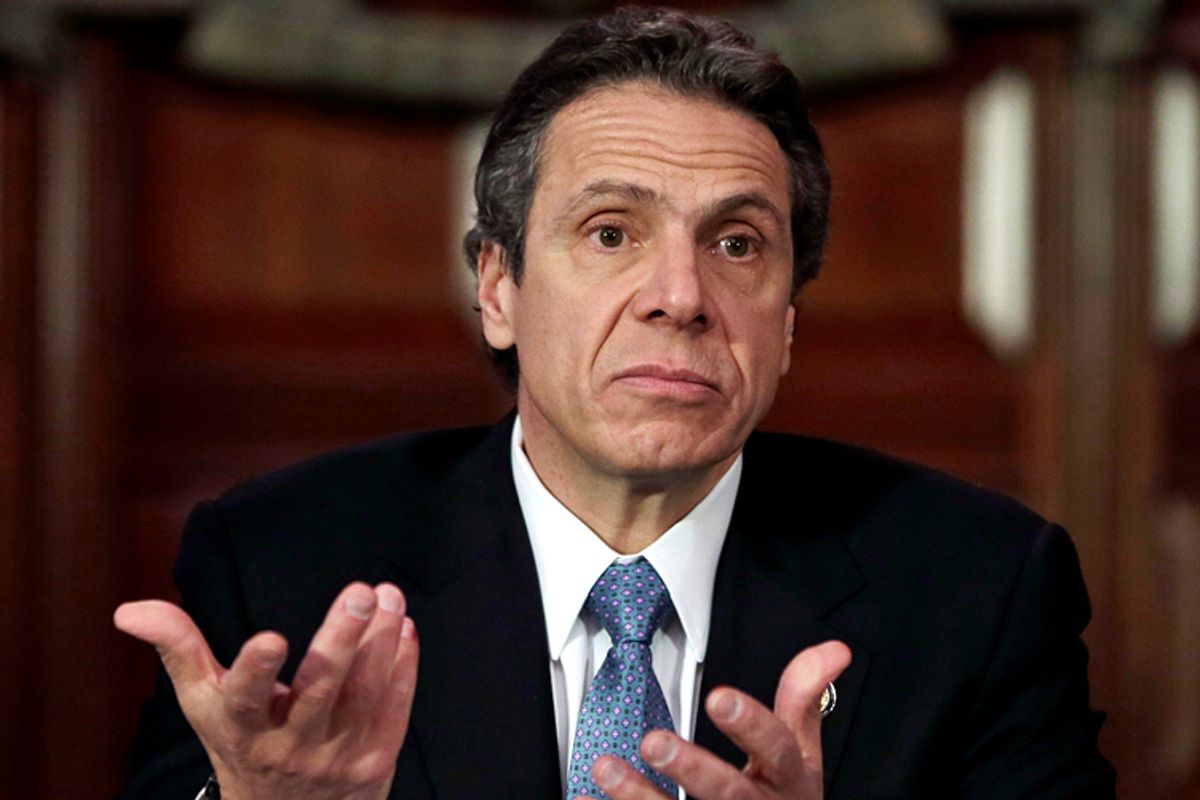 As the Working Families Party prepares to meet in Albany on Saturday to select law professor Zephyr Teachout as its gubernatorial candidate, an 11th-hour deal is being hashed out between the party and governor Andrew Cuomo that could leave that plan in shambles. According to numerous sources, talks are heating up Friday evening and a deal "could be imminent" that results in Cuomo getting the party's ballot line. The line is particularly important to Cuomo because it would mean eliminating a vocal critic on his left, and would mean avoiding splitting votes with a candidate who polls showed could split his margin of victory in half.

One source cautioned that any arrangement reached between the sides would still have to be approved by the WFP's state committee tomorrow, which is composed of activists who are not fond of Cuomo.

As for the contours of the deal, they would appear to include a shift by the governor that would include declaring a new progressive agenda, expressing a newfound devotion to key planks of the party's platform such as public financing of elections, a DREAM Act and a minimum wage increase. To overcome the problem of much of the party not trusting the governor's word, the agenda would be unveiled at a big public event with WFP allies, perhaps as soon as this weekend, in which the governor would stand with key players of the state's institutional left (including de Blasio) -- and declare his support for it.

As I reported yesterday:

As described in today’s Times, one scenario being considered is one in which the governor would hold a public event “express[ing] his intent to help the Democrats reclaim the [state] Senate” if Republicans fail to pass a public financing bill. But several insiders say that it will take much more than this to sell the party’s rank and file on a governor they see as the biggest enemy to their economic agenda. These sources say that to have a chance to get members to back Cuomo, it may require something along the lines of a big kumbaya-type press conference with all the major players of the state’s institutional left — the governor, Mayor Bill de Blasio (who is playing a real peacemaking role behind the scenes), WFP and major labor unions — coming together to declare several things.

First, the united groups — including unions like 1199 and the Hotel Trades Council, which backed a Republican state Senate in recent years — would declare the need for a Democratic state Senate. For WFP members to be interested, they’d like to see the governor say he will help fund primary challenges to the Independent Democratic Caucus — a band of breakaway Democrats now caucusing with Republicans — with millions of dollars if they don’t rejoin the party in earnest. Further, they’d want to see him put real money and energy behind an effort to peel off additional seats for Democrats, ensuring a lasting Senate majority that has eluded Democrats — and real progressive governance in the state — for decades. Finally, party activists say they want to hear the governor declare his intent to deliver a progressive wish-list including not only public financing of elections, but other items like a minimum wage increase and Dream Act.

While the party’s members do not trust the governor’s word — because he’s pledged fealty to progressive agenda items in the past, but declined to deliver — the thinking here is that if unions and the mayor are there to enforce this plan, it would assume greater legitimacy.

It's not clear at this time which of these components would be included in such a deal -- of if the deal will even get finalized. But talks are definitely heating up and have several insiders convinced an agreement could come soon.

More details as we get them...

Update, 5/30/14, 10:30 p.m.: Sources say New York City Mayor Bill de Blasio was a key force in uniting the disparate entities here: WFP activists, unions and Cuomo. Further, the deal being discussed now has been on the table for several weeks, an insider says, with the WFP apparently, suddenly realizing it was in its interests to proceed.

Update, 5/30/14, 11:20 p.m.: Several sources associated with WFP caution that the party's state committee is not guaranteed to bless any deal the leadership makes with the governor. "There are serious trust issues between them and the governor," one explains. All of which means that Saturday's convention will be very interesting.