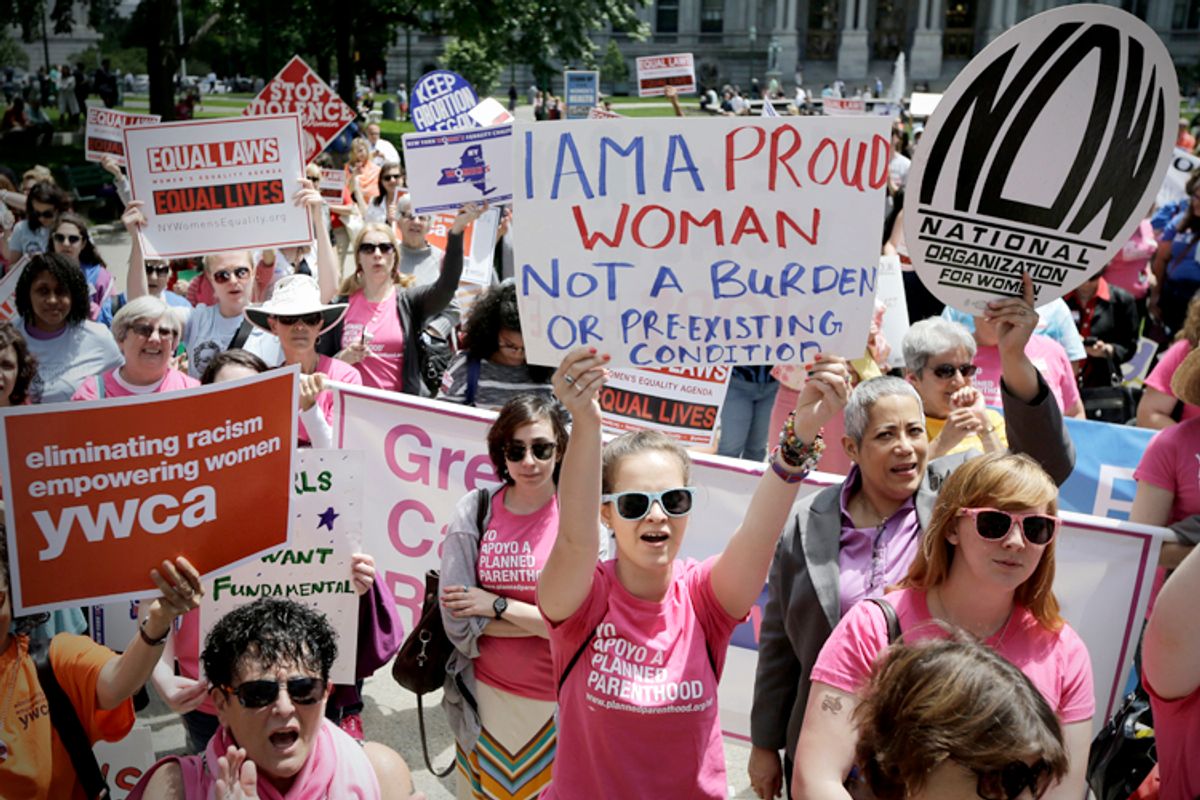 For anti-choice groups, it's not enough of an outrage that a New York City abortion clinic exists. You want to really make them mad? Show them a facility and its workers who aren't appropriately ashamed.

As the New York Daily News reports Friday, Bronx Abortion has a distinctively friendly Facebook presence. Its cover photo features a quartet of widely smiling female healthcare workers, and amid its numerous links for reproductive rights news, it features invitations to its "Saturday morning walk-in" hours and reminders that it's open on holiday weekends. It also maintains a similarly approachable Twitter presence, and a Web page that lets potential clients schedule their walk-in procedures and rebuts the "myths" like "Women are using abortion as a method of birth control" and "Women have abortions for selfish or frivolous reasons." And it promises adolescents that "Our friendly female staff recognizes that a teenager's pregnancy is her own responsibility and we are dedicated to providing confidential, private medical care -- without parental or spousal consent -- to our teenage patients." (I've chosen not to link to its online sites to protect the clinic and its workers from harassment. Happy fifth anniversary of the assassination of Dr. George Tiller, by the way.)

When Salon reached out to the facility's office on Friday for comment an operator said the organization's office administrator had left for the day and couldn't be contacted. But its user-friendly tone seems a very deliberate strategy. Its site offers numerous resources for women to obtain more information on abortion, and its Facebook and Twitter feeds are full of news stories, particularly those that aim to dispel the notion that abortion is something women need to be silent and embarrassed about.

But others would prefer women and girls have their constitutional rights served up with a side of mortification. Lucy LeFever, a blogger for Live Action, told the Daily News Thursday that "To take abortion so lightly that they advertise on something like Facebook is disgusting. Without the word 'abortion' on the page in curly writing, the pink and the hearts make it look like a coffee shop fan page or a manicure and pedicure Groupon deal. The abortion industry thinks it can make abortions cutesy or trendy, and they treat it like a product to be sold." And in a post for Live Action News, LeFever concluded, "Social media doesn’t make abortion cool." A commenter on the site added, "This is a coverup. It's done on purpose, encouraging people to escape from their responsibilities and alienating them from their loved ones."

The Bronx has the highest rate of teen pregnancy – and abortion -- in New York City, a figure Women’s Housing and Economic Development Corp described in March as alarming but not surprising. "Teen pregnancy is a cause, and a consequence, of poverty," professor Vincent Guilamo-Ramos of NYU’s Center for Latino, Adolescent and Family Health added.

So while it may be a handy tool of abortion opponents to perpetuate the idea that women who have abortions are filled with regret and shame and feel that God is punishing them, in a community that's actually affected by the issues of poverty and pregnancy, it's encouraging to see abortion instead treated as something that doesn't have to be scary or traumatic. And in stark contrast to the way abortion is increasingly difficult to obtain in many parts of the nation, it doesn't have to be inconvenient. In fact, it shouldn't be. Better access means earlier and safer abortions. A woman – or a teen – can make serious, informed choices about her reproductive future without it being a miserable and sad experience. If one clinic is trying to help in that cause, that's worth liking, and not just on Facebook.