"Maleficent": A reborn Angelina Jolie is the perfect heroine-villain 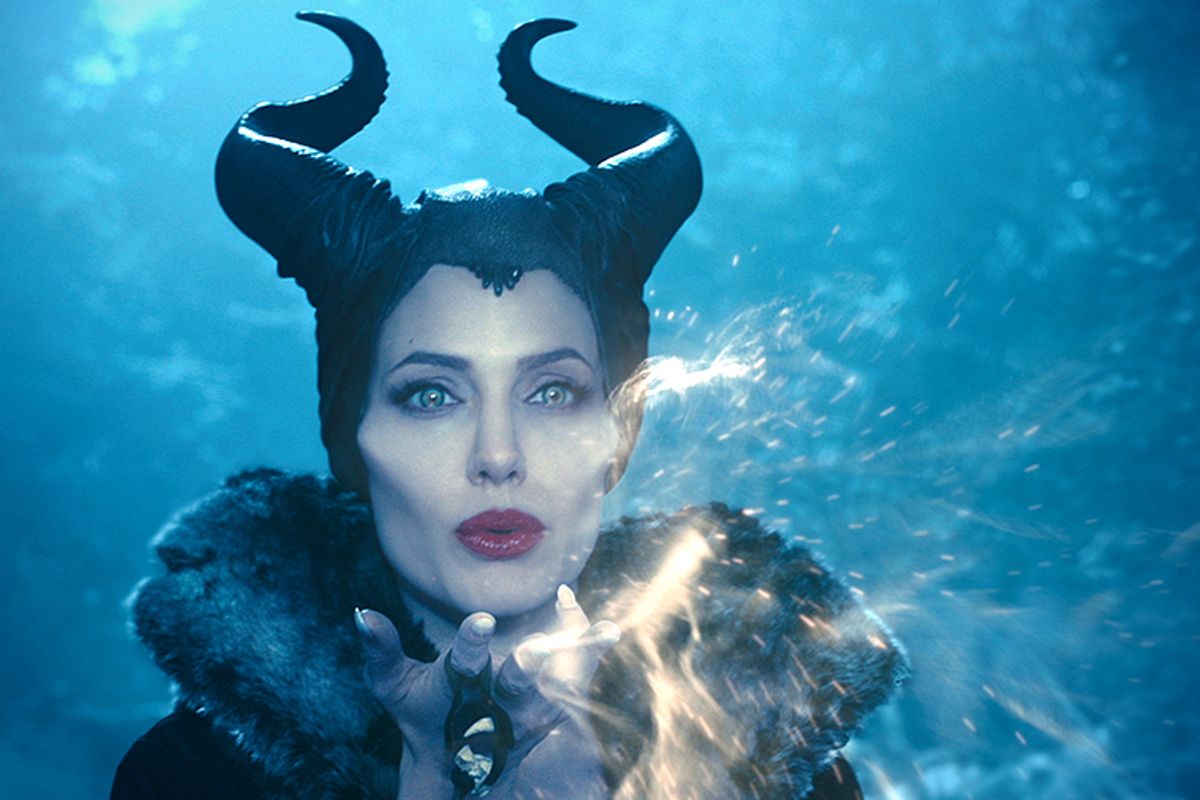 As a visual combination of Walt Disney, James Cameron, Arthur Rackham and Sir John Tenniel, “Maleficent” is one of the most remarkable spectacles of the CGI age, and one of the few recent 3-D movies where it’s probably worth paying extra for those damn glasses. There’s definitely a quality of too-muchness about “Maleficent,” which marks the directing debut of veteran visual-effects whiz Robert Stromberg, like eating all your Halloween candy in one go. At least it’s delicious candy; much of the movie is set in a storybook fairyland gradually edging into darkness – the world of “The Princess Bride,” colonized by Mordor – and the rest in a corrupted royal household out of “Game of Thrones.”

By far the biggest and most effective special effect in “Maleficent,” however, is the queenly and sarcastic Angelina Jolie in the title role, as a betrayed and vengeful fairy princess who will wow tween girls by the zillions. Yes, Jolie’s statuesque figure and remarkable face have been augmented with digital magic. Her real cheekbones, although impressive, are not that exaggerated; that unearthly green glitter in her eyes is artificial; she does not actually have horns. But the regal posture, the internalized pain and injured pride, the pantomime-villainess English accent – those things are all Jolie, and it’s great to see her having fun in a starring role again and doing some good along the way. Yeah, I said that and I’m sticking to it: At the end of an exceptionally tough week for women and girls in America, this pop-feminist retelling of a classic yarn arrives as a surprisingly relevant symbolic antidote.

I totally get why many of my fellow critics are giving “Maleficent” mediocre grades: It’s a stylistic mishmash, and almost everything in it resembles one or another of the numerous fantasy movies and TV series of the last 15 years. But Disney’s target audience for this picture is not middle-aged journalists. It’s tween and early-teen girls who are ready to move half a click upward from “Frozen” and “Brave,” along with their moms. That audience is going to be absolutely thrilled by this slightly subversive fable of revenge and female solidarity – I cannot wait to take my 10-year-old daughter -- and truth be told, a lot of the brothers, boyfriends and dads who claim they don’t want to come along will enjoy it a lot too.

Veteran Disney screenwriter Linda Woolverton has a practiced hand with this genre and this audience (she wrote “Beauty and the Beast,” “The Lion King” and Tim Burton’s “Alice in Wonderland”), but this movie feels especially like a labor of love. It’s easy to criticize the Mouse House for its ideological and aesthetic crimes over the decades, and I’m always eager to do so. But in the John Lasseter era, Disney’s films have made a concerted effort to depict female characters in a different light, as the protagonists of their own stories rather than virginal innocents, quest-objects, happy homemakers and scheming bitch-witches. Don’t get me wrong -- “Snow White and the Seven Dwarfs” is a great movie, and a landmark in animation history. But what’s the first thing Snow White does when she moves into the dwarfs’ disgusting bachelor pad? The dishes.

Maleficent ain’t doing the goddamn dishes. Played as a girl by Isobelle Molloy and then by Ella Purnell, this fairy princess makes the dire mistake of falling hard for a boy named Stefan from the adjoining human kingdom, plagued of course by corruption and mendacity. This ends not just in heartbreak but also in a terrible act of betrayal, a metaphorical rape that abruptly darkens the mood of the film. There are numerous ways to interpret what happens between Stefan and Maleficent: On one side, tiresome people may claim this movie is teaching girls to hate and fear boys; others (equally tiresome) may see it as an argument for chastity and a rejection of today’s promiscuous whateverness. A simpler reading is also available: Girls shouldn’t draw their self-worth from guys, and promises of true love, while seductive in the moment, should not be relied upon. (Also, more practical: If the dude dumps you and then comes back? Don’t fall for it.)

After committing this terrible deed, Stefan rises to the throne of his kingdom and has a daughter; as you may remember from earlier tellings of the tale, Maleficent shows up uninvited at the christening with an unexpected gift. We know where all this is going, or we mostly do. But Jolie dominates every scene she appears in, even when the story reverts to formula, and Woolverton’s screenplay has a few more tricks up its sleeve. It’s perfectly true that Elle Fanning makes little impression in the flattened-out role of Aurora (aka Sleeping Beauty), and that Sharlto Copley as the hollowed-out adult King Stefan is demonic gleam and not much else. But neither of them is the story’s real hero, real villain or true heart.

That’s all Jolie, and I wouldn’t surrender a second of this performance for anything. Not her stony, shocked (and hilarious) “What?” when Aurora joyfully burbles, “You’re my fairy godmother!” Not the way Maleficent calls the girl “Beastie,” first in a spirit of bemused, scientific dismissal and then with a growing affection she tries but fails to disguise. I could definitely live without the trio of comical-cute fairies played by Lesley Manville, Imelda Staunton and Juno Temple (although I suspect they’ll be popular with younger viewers). But whatever its flaws, “Maleficent” is a family-friendly Disney adventure that offers a relaunched and thoroughly delightful Angelina Jolie, that suggests romantic love is often a trap, and that proposes that the families we build and discover as we grow up can be more rewarding than the ones we’re born with.