The embattled GOP governor wants to settle an awful legal headache. But that has his conservative base up in arms 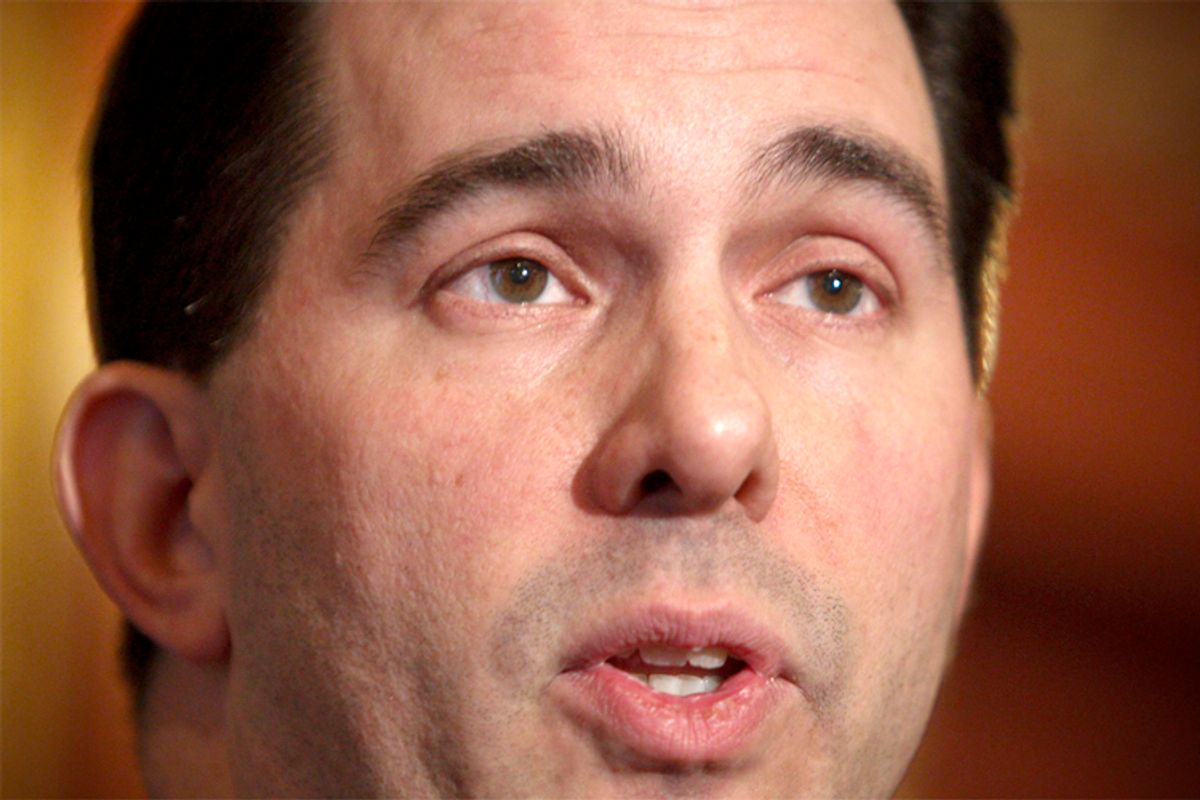 It seems as though every presidential race in recent years offers up a Republican governor from the upper Midwest as the great white hope. They're usually talked up as "reformers," perhaps trying to capitalize on the tradition of Robert La Follette, the famous Wisconsin iconoclast, at times when the Republican establishment feels it needs to pretend to be more "with it" than it actually is.

At one point it was Wisconsin Gov. Tommy Thompson, widely hailed in the media as an innovative thinker who would be practically unbeatable. Unfortunately, when he finally took the bait and ran in 2008 he flamed out spectacularly with a series of gaffes in which he endorsed discrimination in employment and insulted Jewish people. Then there was Tim Pawlenty, a former  Minnesota governor, who had been on the short list for years, withering into an afterthought despite spending lots of donor money on histrionic, Michael Bay-style campaign ads designed to enhance his manly appeal.

And now we have Wisconsin Gov. Scott Walker, scourge of teachers unions and liberal activists everywhere, who has, as usual, been talked up in the national political media for years. He even made the pilgrimage to the Venetian in Vegas to kiss Sheldon Adelson's wad of cash. The New Republic proclaimed him the one candidate who could unite the party:

Scott Walker, the battle-hardened governor of Wisconsin, is the candidate that the factional candidates should fear. Not only does he seem poised to run—he released a book last week—but he possesses the tools and positions necessary to unite the traditional Republican coalition and marginalize its discontents.

Oooh baby. And they weren't exactly wrong. Walker does have some things going for him that other Republican candidates do not. He's got that Midwest maverick image, but his reforms are all policies the Tea Partyers can wrap their arms around. He's a proven winner against the alleged Democratic union "machine." And he's a right-wing politician who doesn't seem like a hater, a somewhat unique skill in the modern GOP. What's not to like?

Well, Walker has a little corruption problem that he just can't seem to shake. In brief, the governor is being investigated by prosecutors for illegally coordinating with conservative groups, an investigation that sprang from an earlier one investigating Walker's previous tenure as Milwaukee Country executive. Three of Walker's close aides were indicted on felony embezzlement charges and charges were brought against a major campaign donor along with one of his appointees. But it's the newer investigation that's giving the Walker people heartburn:

The John Doe probe began in August of 2012 and is examining possible "illegal campaign coordination between (name redacted), a campaign committee, and certain special interest groups," according to an unsealed filing in the case. Sources told the Milwaukee Journal Sentinel the redacted committee is the Walker campaign, Friends of Scott Walker. Campaign filings show that Walker spent $86,000 on legal fees in the second half of 2013.

A John Doe is similar to a grand jury investigation, but in front of a judge rather than a jury, and is conducted under strict secrecy orders.

The Wall Street Journal editorial page has been on a crusade about this case, casting it as an attack on free speech, stretching even the new elastic meaning of campaign finance laws to the limit. And until a couple of days ago, they and their allies were reveling in their recent victories in the courts. The investigation had been most recently turned on its head by a friend of the Koch brothers and a Federalist Society judge by the name of Rudolph Randa who halted the investigation, calling it a "partisan witch hunt." The Wall Street Journal inanely trumpeted the headline: "Wisconsin Civil-Rights March"

Score another one for free political speech. On Tuesday, Federal District Judge Rudolph Randa soundly rejected a motion to dismiss a federal civil-rights lawsuit against Wisconsin prosecutors who are investigating the political activities of conservative groups (but not liberals).

And then they broke  into a rousing rendition of "We shall overcome."  The affiliated big money right-wing groups like Club for Growth and American Crossroads and Americans for Prosperity were undoubtedly very pleased at that outcome. And they were also undoubtedly very pleased with one Scott Walker who was standing up nicely to the pressure and getting their backs when they had so generously padded his campaign coffers. That's how it's supposed to work. And then the bottom fell out:

A legal civil war broke out Wednesday among targets of a John Doe probe, as a conservative group sought Wednesday to block prosecutors from having settlement talks with Gov. Scott Walker's campaign.

In a letter sent Wednesday, the Washington, D.C., attorney representing the Wisconsin Club for Growth and one of its directors questioned whether a special prosecutor in the case is negotiating with the GOP governor's campaign to seek concessions that the club might oppose.

Oops. It would appear that Gov. Walker forgot whom he was working for for a moment there. It's one thing to want to put a political scandal behind you, it's quite another to fail to comprehend that you have been chosen as a designated test case for Big Money and they expect you to fight it all the way for the good of the team.

And the team leaders are hopping mad. Here's the Wall Street Journal's reaction to the news:

Walker might think he can help himself with a settlement, but he'd be letting down his allies if he did so in a way that lets the bogus theory of illegal coordination survive. Wisconsin has an especially pernicious regulatory machine that targets political speech, and the legal backlash to the John Doe probe offers a rare chance to dismantle it. Mr. Walker is a hero to many for his fight against public unions, but he will tarnish that image if he sells out the cause for some short-term re-election reassurance.

Yes, and all those allies who might "help" with that presidential campaign Gov. Walker is obviously trying to salvage will likely not be there with the money that's been implicitly promised.

Scott Walker has a problem. He is obviously spooked by this probe and would like to put it behind him because he knows it could derail his larger ambitions. But his backers want him to fight all the way, at maximum danger to himself, so they can make a political point. And he needs those backers -- every Republican presidential candidate does. What to do? Will he throw himself on the sacrificial altar for the Koch brothers and just hope he comes out alive? Stay tuned.