The overlooked Shinseki lesson: How the two parties differ today

As Democrats broke with Obama and called for his removal, the contrast with GOP conformity was never more stark 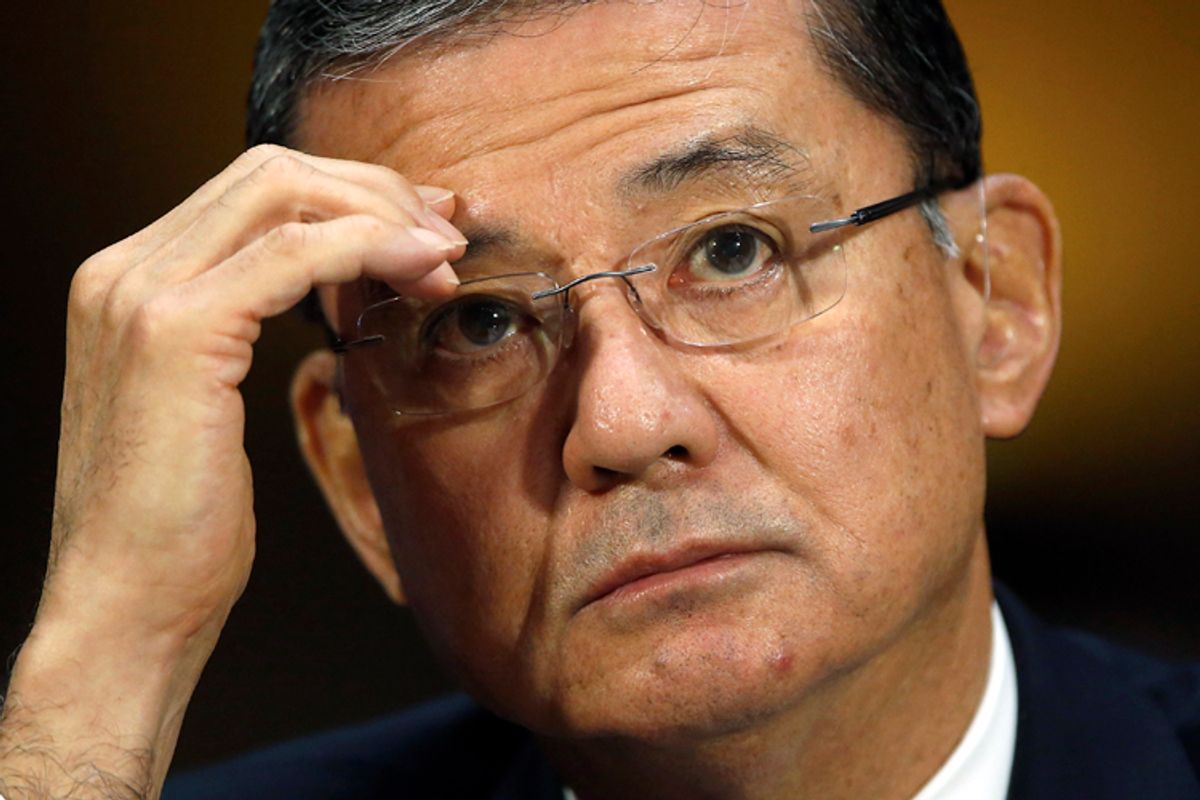 The scandal at the Department of Veterans Affairs forced the resignation of Secretary Eric Shinseki Friday morning. It became obvious he was on his way out as more Democrats began demanding his removal, including former VA assistant secretary and Iraq War vet Rep. Tammy Duckworth, who had defended Shinseki.

Ironically, Ron Fournier – under fire by my colleague Simon Maloy for yet another “both sides are to blame” column, this one on immigration – tweeted at me this morning rather snarkily:

I answered that of course both parties bear blame for long-term problems at the VA – but not for the immigration deadlock. Sure, the VA was poorly managed under George W. Bush and it has remained troubled under President Obama. And sure, we can blame two botched Bush wars, one of them unnecessary, for some of the VA’s troubles. But the buck stops with the current president.

The thing is, most Democrats agree. Even many in Congress. By late Thursday, according to the Washington Post, a fifth of the Senate Democratic caucus had called for Shinseki’s removal, which Obama initially resisted, as had at least two dozen House Democrats. Those numbers already were climbing Friday morning before Shinseki’s resignation was announced.

Contrast that with the nearly lockstep political behavior by the GOP since Obama became president. Now, on immigration – Fournier’s latest issue -- a few Republican senators deserve credit for breaking with their party and supporting the bill that passed the Senate. But House Speaker John Boehner has kept it bottled up on his side, and anti-immigrant Rep. Steve King has taken to bragging that his position dominates the House today. There is no question about which party is to blame for the impasse; it's the GOP.

It’s not just immigration reform. Once Senate Minority Leader Mitch McConnell laid down the law -- that there would be no GOP votes for Obama’s priorities, because that would make them appear to be “bipartisan” – there could be no bipartisan attempts to solve the nation’s problems. On the Affordable Care Act, Democrats accepted hundreds of GOP amendments that compromised or sold out progressive priorities, but never got GOP votes for the bill. “It was absolutely critical that everybody be together,” McConnell told the New York Times, “because if the proponents of the bill were able to say it was bipartisan, it tended to convey to the public that this is O.K., they must have figured it out. It’s either bipartisan or it isn’t.”

The debt ceiling, once demagogued a bit but routinely raised by both parties, became under Obama “a hostage worth ransoming,” in McConnell’s words. I could go on – I have gone on, in other columns – forever.

In the case of the VA, by contrast, many Democrats lent their voices to the throng of people, including Republicans, saying a leadership change was essential. On Friday, the president agreed, and accepted Shinseki's resignation. Of course, that won’t stop the braying from the partisans. RNC chair Reince Priebus, fresh from sharing a platform with "Duck Dynasty" bigot Phil Robertson, said, "It's past time for the president to step up and fix this mess" at the VA. "Until then, personnel changes aren't an answer to the problem for our veterans. It's just musical chairs." The GOP will forever move the goalposts for this president.

There was a time when the VA itself wasn’t a partisan issue – former Senate Majority Leader Bob Dole reminded us of that when he came out to support Shinseki a few weeks ago. Maybe fixing the VA can become a bipartisan priority once again, but I wouldn’t hold my breath as long as Obama is president.