Want to understand what's causing the decay of American dream? Take lessons from our friends to the north (UPDATED) 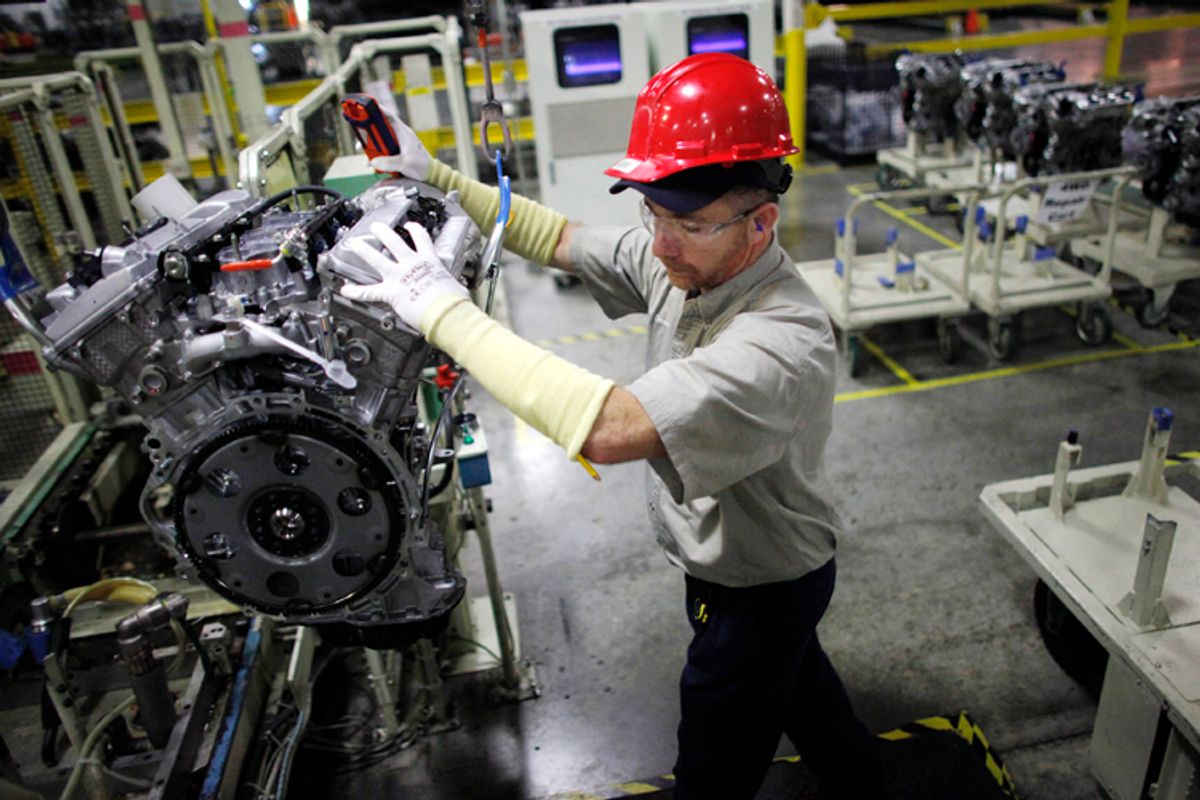 A few summers ago, I spent six weeks in Canada, as part of a 10,000-mile Great Lakes Circle tour. From Pigeon River on Lake Superior to Kingston on Lake Ontario, I drove and camped my way across Ontario. On Manitoulin Island, I went on a fishing charter captained by a retired nickel miner named Tom Power. The Nickel Belt is a stronghold of Canada’s most socialistic party, the New Democrats. When the conversation turned to politics (as it often did with Canadians during the George W. Bush years), Tom made a statement that would have tabbed him as a Marxist crank on the other side of the lakes.

Right then, my rod bent toward the water, so I had to abandon our discussion of economics to land a six-pound salmon. But I thought about it again in Toronto, when I visited Jane and Finch, an immigrant neighborhood that was reputedly the most dangerous turf in the Greater Toronto Area. I expected to see Johnny Too Bads in beehive rasta caps, and dingy apartment blocks with smoke burns around broken windows. To my disappointment, it didn’t look like a slum at all. It looked like my grandparents’ civil-service ghetto in a suburb of Washington, D.C. The housing projects were clean white monuments. Ranch houses looked out on barbered greensward parks.

“There have been some shootings lately,” a Guyanese-Canadian bureaucrat told me at the Community Information Center inside the local shopping mall. “But we don’t have ghettoes here like you would think of in the United States. We have scatter housing. We try not to concentrate poverty in one place.”

The manager of my guest house was a Bronx expatriate who understood both his countries better than they understood themselves.

“If you want to see your name in lights, go to the United States,” he explained. “If you want a stable middle-class existence, go to Canada.”

This was all different than the extremes of opulence and destitution I was used to at home, but I didn’t really experience culture shock until I crossed back into the United States, on the tramp ferry from Kingston to Cape Vincent, N.Y. After weeks of driving through Canada’s orderly fishing ports and suburbanized metropolises, I was suddenly seeing … rural slums. Small towns blighted by abandoned gas stations. Dingy farmhouses with empty, eyeless windows. At the Erie County Fair, outside Buffalo, I witnessed a pageant of American poverty: a man swinging his lone leg between a pair of crutches, a phlegmy, smoky laugh gurgling from a mouth with intermittent teeth, a woman whose clothes were so packed with flesh she had to swing her shoulders robotically just to move forward.

I hadn’t noticed such poverty in Ontario. More significantly, I hadn’t noticed that I hadn’t noticed. For most of the summer, I’d been traveling through a country that tries to drag all its citizens as close to a middle-class lifestyle as possible. Southern Ontario is the least exotic place on Earth. What’s remarkable about a nation full of people with good teeth and summer cottages?

That’s why I wasn’t surprised by the Luxembourg Income Study’s announcement that Canada has surpassed the United States as the country with the most prosperous middle class. I assumed they’d always been ahead of us, or at least since the Guess Who hollered, “I don’t need your ghetto scenes.”

As Americans, we like to be No. 1 at everything, including being average. We’re still the wealthiest country, controlling 39 percent of the world’s financial assets -- three times as much as runner-up Japan. But losing the middle-class crown is a blow to our self-image as the Land of Opportunity, and the surest sign that the Great Recession and the Great Divergence have permanently altered our nation’s character.

To understand why Canada’s middle class is faring better, I talked to four Canadians who span the nation geographically, from Ottawa to Vancouver, and politically, from welfare-state liberal to prairie libertarian. The incipient reasons, they all agreed, are the increase in prices of Canadian exports, especially oil from Alberta and Newfoundland, and the crash of the American housing market, which would never have happened in a country as risk-averse as Canada.

“There’s no way in Canada you’re going to get a zero-down mortgage,” said Jason Clemens, executive vice president of Vancouver’s Fraser Institute. “We have a much more conservative banking culture. Our banks hold all the mortgages they sell. They never got into the bundling.”

“What we’ve seen is a troubling decade for the U.S. in the 2000s,” Corak said. “We didn’t get hit by the recession and the dot-com bust.”

Beneath Canada’s contemporary advantages, though, are historic factors that make it a more equal society than the United States. No. 1 is the fact that the nation is too far north to have supported plantation agriculture. Because of that, Canada never imported slaves, and never created an economic structure whose success depended on the permanent exploitation and marginalization of an ethnic underclass.

“The conservative movement in the States has been more successful in creating a low-wage economy,” said Rick Smith, executive director of the Broadbent Institute, a progressive think tank founded by a former leader of the New Democratic Party. (Smith was speaking from the Canadian Labour Congress convention in Montreal, which allowed him to point out that Canada’s 33 percent unionization rate is triple ours.)

Canada’s high school graduation rate is 8 points higher than ours, and Canadians claim it’s because their education system is less segregated by race and class.

“One of the things that doesn’t happen in Canada to the extent it does in the U.S., we don’t have large-scale concentrations of poverty,” Clemens said. “You’d be hard-pressed to find a public school where all the students are poor. Canada doesn’t have the slave history that the U.S. struggles with. We had immigration, but we never undertook these large-scale concentrations. At my kids’ school in Vancouver, you have kids from fully subsidized social housing sitting side by side with kids from different backgrounds. The kids have those social role models.”

(Lest Canadians get too smug, the poverty among Natives is shameful: Their incomes are 30 percent below the national average. In Thunder Bay, I saw Cree beggars panhandling in front of the casino, and families pulling up to grocery store in overloaded cars with sagging shock absorbers. But aboriginals make up only 4 percent of the population, and colonization didn’t create the same level of historic resentment as enslavement.)

Canada also benefits just by sharing a border and a language with the United States. We spend 4.2 percent of our GDP on the military -- one of the highest rates in the world. Canada only has to spend 1.3 percent of its GDP on tanks and bombs, because we’re not going to tolerate an invasion of our next-door neighbor (and No. 1 source of oil). That frees up their budget to support a single-payer healthcare system, and to subsidize university tuition. A year at the University of Toronto, Canada’s most prestigious college, costs about $12,000.

“[E]ducational attainment in the United States has risen far more slowly than in much of the industrialized world over the last three decades,” the New York Times wrote in an article on Canada’s triumphant middle class. “Americans between the ages of 55 and 65 have literacy, numeracy and technology skills that are above average relative to 55- to 65-year-olds in the rest of the industrialized world … Those between 16 and 24 rank near the bottom among rich countries, well behind their counterparts in Canada.”

While those factors contribute to Canada’s smaller underclass, the English-speaking superpowers siphon off some of its would-be upper class. In the U.S., the top 1 percent of earners take home 47 percent of  total growth; in Canada, it’s 37 percent. There are plenty of rich and famous Canadians, from Steve Nash to Conrad Black to William Shatner, but most of them went to the U.S. or England to get that way. (The “tall poppy syndrome” is a real thing in Canada. Black renounced his Canadian citizenship to accept a life peerage in the British House of Lords, calling Canada “an oppressive little world” and “a Third World dump run by raving socialists.” His lordship’s attempt to reclaim it, so he could avoid serving a sentence for fraud in an American prison, provoked a nationwide outburst of schadenfreude.)

Economically, Canadians have both a lower ceiling and a higher floor. Taxes are higher. In Ontario, federal and provincial sales taxes total 13 percent, and the top tax rate kicks in at $136,000. But the minimum wage is $11 an hour, the lowest income tax rate is 4 percent, and the working income tax benefit is more generous than our earned income tax credit.

“If I’ve got the capacities and the real talents, I would do better in Manhattan than Toronto,” Corak said, echoing my Toronto innkeeper, “and if I come from a lower socioeconomic level, I’d rather live in Toronto.”

Canada is a land of averaging out. The United States is a land of extremes, something I never really understood until I visited our neighbor. We have Harvard University, but we also have inner-city school districts with 50 percent dropout rates. We have the most billionaires, but our economic inequality more closely resembles the Third World than it does other industrialized nations. Canada’s middle class is No. 1 because we had a bummer of a decade, but unless we can solve our political and economic divisions, it’s likely to remain No. 1. It’s impossible for the U.S. to emulate Canada’s success, because Canadians deliberately adopt un-American policies, just to establish a distinct national identity. To quote a T-shirt I saw in the Sarnia Duty Free: “Canadian: An Unarmed American With Health Care.”

“There are a lot of reasons that Canada will do pretty well,” said Steve Lafleur of the Frontier Centre for Public Policy in Winnipeg. One is immigration, essential to a country with a below-replacement birthrate. American immigration policy is focused on controlling the flow from a much poorer nation on our border. Because of its geographic isolation, Canada is able to pick and choose who enters the country. “We’ve welcomed the best and the brightest. The closing of the American border is going to hurt in attracting the talent to build Fortune 500 companies.”

In 1904, Canadian Prime Minister Wilfrid Laurier -- the man whose face is on the $5 bill -- made this prediction: “The nineteenth century was the century of the United States. I think we can claim that Canada will fill the twentieth century.”