Most men don't rape or kill or condone misogyny. But it's our job to confront the disordered culture of masculinity 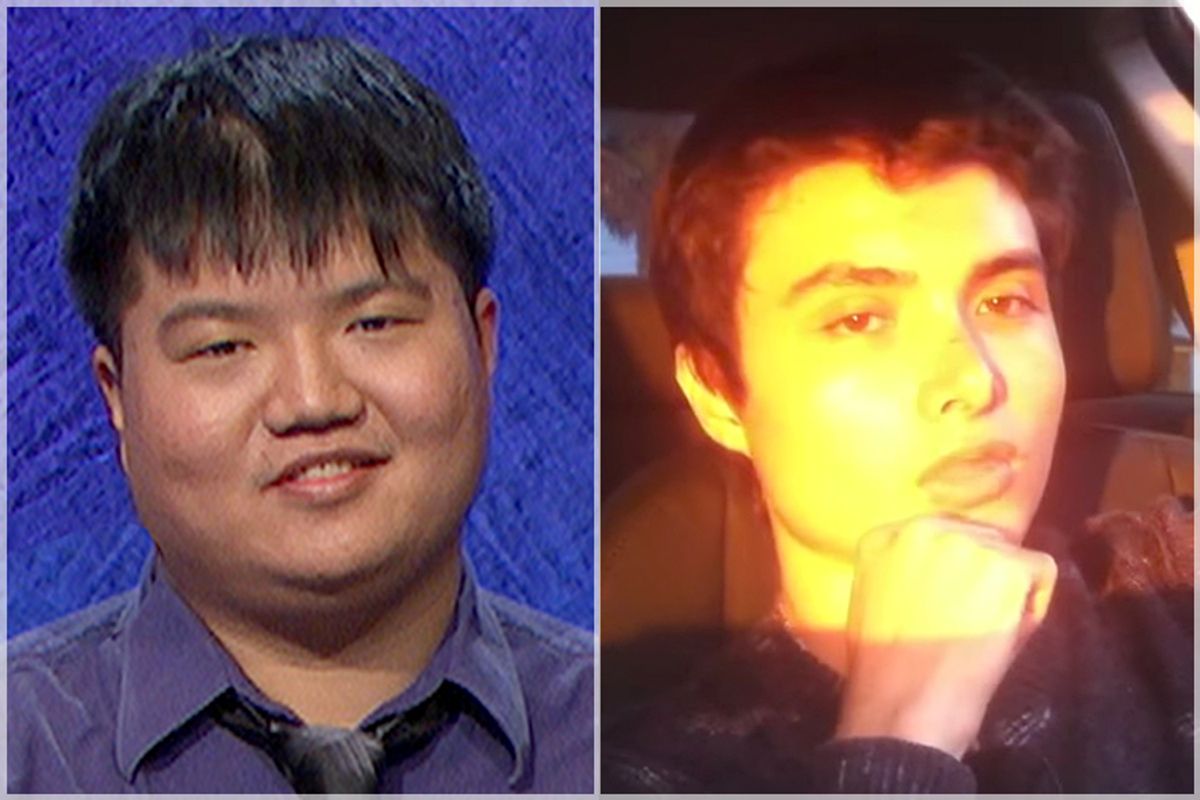 I’m beginning to wonder whether the Elliot Rodger story, in the long run, might be a more important moment for men than for women. I don’t mean to devalue or diminish the collective display of female outrage, and female solidarity, that we have experienced in the aftermath of the Isla Vista shootings. Quite the opposite. But it is overwhelmingly – indeed, almost exclusively – men who commit mass murder of this kind and on this scale, and the poisonous misogyny of Rodger’s worldview is a distinctively male phenomenon. Is it possible to find women who genuinely hate men? No doubt it is; our culture is a big place. But I am unaware of any Internet communities where women gather to demean and stereotype men in the most vile and reductive terms, or openly indulge in fantasies about raping, humiliating and enslaving them. Can women commit rape, or violent spousal abuse? Certainly. But whatever fantasies the “men’s rights movement” chooses to propound, in statistical terms they hardly ever do.

If men can face these facts directly, and if they -- or rather we -- can approach the #YesAllWomen phenomenon and the startling array of journalistic, sociological and personal responses it has engendered without defensiveness, in a spirit of listening and learning, then it’s possible that the awfulness of the Rodger tragedy can yield some positive results. I am not saying that male privilege means that we have to sit in the corner in silence, and don’t get to have our own opinions and our own voices on this issue. Debates among men about what happened here, how we think about it and what to do about it are crucial: Arthur Chu’s widely read essay about the sins of “nerd culture” and its hidden code of male entitlement is one obvious example, and one whose implications go far beyond its target audience.

I’m also not saying that we’re obliged to nod along in studious agreement every time a woman speaks out on this question. News flash: Women are all different, and the proportion of them who are idiots should seem pretty familiar. But the overwhelming response of so many different women to the Isla Vista story – the idea that it reflects a widespread cultural pattern that has touched every woman’s life – is, or should be, a real eye-opener, even to men who think of themselves as progressive and pro-feminist. If we turn away from the opportunity to hear that message, and think about it honestly, we’re doing ourselves no favors. Is that what real men would do?

Yes, positive results are possible, but I don't say they’re probable. For one thing, we have a remarkably poor record in this country of seizing the opportunities that follow spectacular crimes of this sort. After the Aurora and Newtown shootings, there appeared to be a window for some modest degree of national gun regulation, perhaps a federal ban on military-style assault weapons and high-capacity ammo clips. But in case you hadn’t noticed, our political system is paralyzed and dysfunctional, and the party with a House majority is held hostage by weapons manufacturers and a fanatical core of Second Amendment truthers. So that went nowhere, because Thomas Jefferson’s vision of the republic’s future evidently involved a lot of fat white guys in camo vests stockpiling action-movie arsenals. (The good news about the Obama-era explosion in gun ownership is that it hasn’t altered the general downward trend in crime. The bad news is that it probably means that the people who already had guns have bought more of them.)

But that’s not actually my subject here, although we should stipulate that reasonable restrictions on firearm ownership would go a long way toward reducing the frequency, the body count and the media-friendly spectacle of incidents like the Isla Vista killings. Now, Elliot Rodger would presumably have been just as disturbed on the subject of male-female relations if he’d lived in England or Germany or any of the other major Western countries where it’s much more difficult to acquire guns (which would be, let’s see, all of them). What troubles me is the extent to which many men seek to ignore or deflect all conversation about the specific nature of Elliot Rodger’s pathology, along with the evident fact that many women see that pathology as a ubiquitous social and cultural problem.

It’s one thing to conclude that access to guns and inadequate mental-health treatment were the most important factors in the toxic equation that fueled Rodger’s rampage, and that misogynistic ranting was the form of his crazy but not the substance. I don’t find that entirely persuasive, but it’s a reasonable position in itself. What I’ve encountered over and over again this past week on Twitter and comments forums and message boards is that opinion used as a weapon, angrily presented as an incontrovertible fact that should put an end to all this hysterical and irresponsible lady-talk. It’s a window-slammer, meant to terminate a conversation that threatens to stray into uncomfortable questions about misogyny, male entitlement and masculine identity. It’s another way of telling the girls to shut up. And fellas, we’ve done quite enough of that.

I can identify with the discomfort, to some degree. I can understand why many guys don’t want to contemplate the possibility that the deeply ingrained values and supposedly noble ideals of masculinity embody dangerous and unresolved contradictions, or that their dark side leaks out all over the place, sometimes as rape and murder but more often in “innocent” form as subway-train groping or workplace harassment or catcalls and crude jokes. My dad was an Irish immigrant from a working-class background whose instructions on “being a man” are inscribed on my psyche in letters of fire. Whether I live up to them or not, they’ll always be there. A man does what is required, without complaint; he faces the difficult or unpleasant tasks first; he pays the bills and puts groceries on the table and never lets the details slide. I feel a lot of you nodding in recognition. (A man also folds his clothes neatly no matter what time he got home or how drunk he is; that one was important.)

I was also fortunate to have a mother who was (and still is) a feminist poet and teacher; one of the best things I can say about my dad is that he married her. It took me a long time to notice that the lessons about women’s equality and autonomy that I got from her were not entirely congruent with the ones I got from my dad. In the real world of my 1970s childhood, more and more women took on supposedly masculine tasks like bill-paying and grocery-subsidizing while also doing the tedious but necessary work men barely noticed, like changing diapers, vacuuming the shag carpet and cooking meals they felt too tired to eat. One of the big cultural issues of the last several decades, which fueled the men’s movement and the career of Camille Paglia and Maxim magazine and the rise (and fall) of the metrosexual and all kinds of other stuff, is that traditional gender roles and the sexual division of labor that came along with industrial capitalism started to come unglued. Those changes are often described as feminism, but it’s not like feminism happened in a vacuum; it has a dialectical relationship with the macroeconomic demands that pushed most women into the workplace.

Whether all that was a good thing or a bad thing is very much a question of your perspective, but I think we can agree that some men felt confused and alienated by these changes, and especially by the loss of masculine specialness. (Not all men, to coin a phrase. But a lot.) If women turned out to be just as good at working deadly middle-management jobs, writing mortgage checks and rewiring lamps, then where was the arena of “real” masculinity? For some men, that became stuff previously found on the margins of masculine identity, like sports fandom or whiskey connoisseurship or poker. Some men – yeah, again, not all – drifted toward the dark side of masculine identity, which had always been there but wasn’t openly acknowledged: the objectification of women, hatred of women and violence against women. I halfway think there's a connection between these phenomena, between the rise of parenthetical lifestyle masculinity and overt misogyny. But I won't argue that too forcefully.

I’m not suggesting there was less violence against women in the good old days of unquestioned male supremacy; that’s almost certainly not true. I’m saying that the cultural context has changed, and that the male rage expressed by someone like Elliot Rodger shapes itself in response to that context. Rodger said as clearly as he possibly could that he intended to avenge himself against women, en masse, for their independence, their sexual agency and their lack of subservience to his desires. The entire focus of the men’s-rights activism (MRA) and pick-up artist (PUA) realms we’ve heard so much about this week is to fight back against feminism, to deny it any legitimacy and even to argue that it doesn’t really exist. This is an old desire, the desire to dominate and control female sexuality, in a contemporary frame. One of my questions about the #YesAllWomen moment – and it’s not an easy question to answer – is whether women feel that the level of public threat and misogyny has gotten worse in recent history, or remained constant.

I’m virtually 100 percent sure that my dad never raised his hand against a woman, and would have strongly disapproved of any guy who did. He had some old-fashioned sexist views but was not a misogynist, in any normal sense of that word. (Let’s leave the conversation about alcoholism and philandering for another time.) Most men, whether they’re frat boys or fine-art curators, do not commit or condone violence against women. But as Slate blogger Phil Plait has observed, it’s unhelpful and weirdly defensive to repeatedly assure women that #NotAllMen are rapists or murderers. Women know that already. Most of them have men in their lives whom they love and trust. No one, as far as I know, has suggested that all men are equally to blame for the crimes of Elliot Rodger. The real question is whether all men did enough to stop him (we didn’t) and what we can do to stop other men from doing similar things in the future.

It’s a little paranoid, and more than a little revealing, for men to respond as if our entire gender were attacked when large numbers of women summon the courage to tell us that they feel threatened by us. Even if we believe that misogyny was not the prime mover in the Rodger case – "He killed men too!" – a whole lot of women feel differently, and we need to hear that without dismissing their concerns or changing the subject. Are all men guilty for Isla Vista? No. Not exactly. But also partly yes. All men are implicated in a culture of masculinity that allows such things to happen. It's a culture that looks away from misogynistic crimes, or proclaims them to be isolated and untypical events rather than extreme examples of things that happen every day. It's a culture that does not ask whether it’s our responsibility to love and nurture our sons and brothers such that they grow up knowing that women and girls are not the enemy, not an alien species, not vessels for their lust or displaced self-loathing or misguided veneration but complicated and wonderful and exasperating human beings not unlike themselves. Changing that culture won’t be easy. My dad taught me that a man always tackles the hardest tasks first.